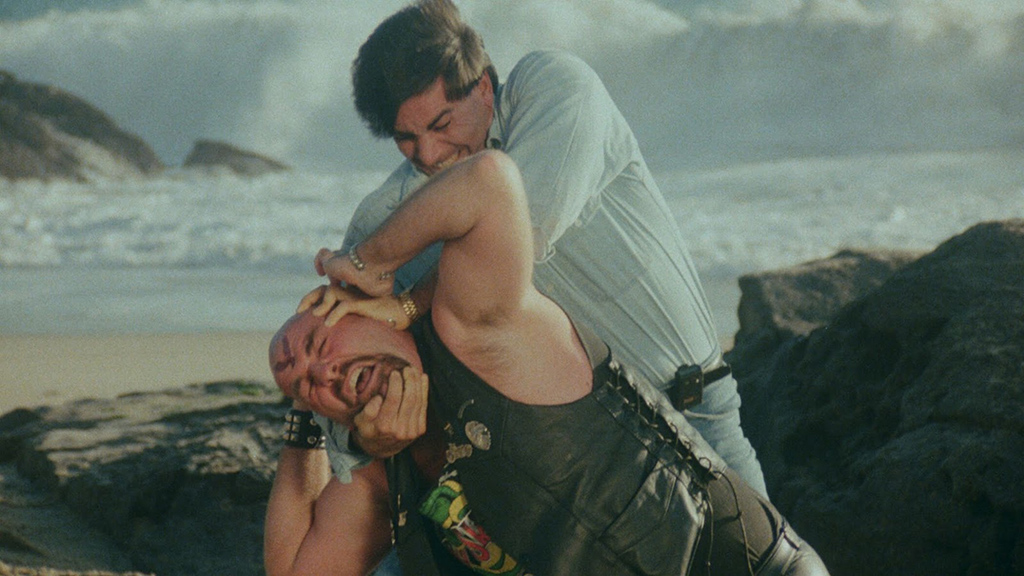 A few years ago during Fantastic Fest in Austin, the Alamo Drafthouse unveiled a movie that was previously thought to have been lost, but that was rescued at the last moment.

That movie was Miami Connection, a film that became an instant hit with the off-beat and mondo cinema crowd. But, in the run-up to this year's fest, organizers said they had a new movie in their hands that was sure to blow Miami Connection out of the water. That movie is director/writer/producer/composer (he's given all of these roles in the credits) John S. Rad's magnum opus, Dangerous Men.

And boy does it live up to that Fantastic Fest hype.

Created on and off over the course of a 26-year period — take that, Linklater — Dangerous Men finally earned its initial release in 2005. That's when, after being turned down by festivals and distributors, Rad rented out four Los Angeles theaters himself and showed his creation. It, of course, flopped. In its first week, it earned a mere $70.

Now that it's earned the attention of the Drafthouse Films crew, though — eight years after Rad's death, unfortunately — it stands to earn much more than that.

Naturally, there are some caveats at play here. Heading in, you have to know that this is a “so bad it's good” movie, and that there's a right way and a wrong way to consume a film like this. First off, you have to appreciate it for the low-budget — and thus scrappy and rather awkward — affair that it is. Second, you have to laugh with it rather than at it — a distinction that many just simply cannot make, but an important one. To laugh at a film like Dangerous Men is to watch it wrong, and to get what separates the irony lovers and appreciators from the cinema bullies of the world.

But what, exactly, are you seeing with Dangerous Men? Well, to call it an intense experience would be to undersell it. Ostensibly, it's about a woman named Mina (Melody Wiggins) who becomes a feminist vigilante after her fiancee is killed by a pair of bikers who attempt to rape her. But, really, there are about five different plots going on at the same time in this movie, with characters disappearing in and out of the film for extended periods of time, and for unexplained reasons.

The lack of a concrete plot structure is ultimately Dangerous Men's most unique quality. Even at its most coherent, the movie never follows a character for too long. When it does, it's a completely superfluous character whose actions won't affect the plot whatsoever.

The editing choices are also bizarre as hell, like when one character complains about a romantic interest working too much — only to then be immediately cut off for a surprise, three-second sex scene.

Then there's the music, which is actually pretty great. When John S. Rad composes music for a movie, he composes the hell out of it. Most every moment of the film is scored with catchy synth washes and sweet drum machine beats. Just keep in mind that the music doesn't always seem to line up with the scene playing over it, unless you're somehow anticipating a jazzy score to soundtrack an attempted rape.

It's a good thing that music's compelling, though, because the rest of the sound here is a mess. Background and ambient sounds cut in and out depending on whether the characters are speaking. Oh, and if you want to hear some of the goofy dialogue, you might not be able to: The mix is so totally focused on the music that it often disregards all else. Depending on your ear, it might drive you crazy.

No, Dangerous Men is not a very well-made movie. But it is a singular cinematic experience. And the fact that the enigmatic Rad felt so passionate about it to devote so much time to it is something that should be celebrated. Catch it during its theatrical re-run, grab some beers while you do, and prepare gleefully to be confused.