Such An Obscure Crime. 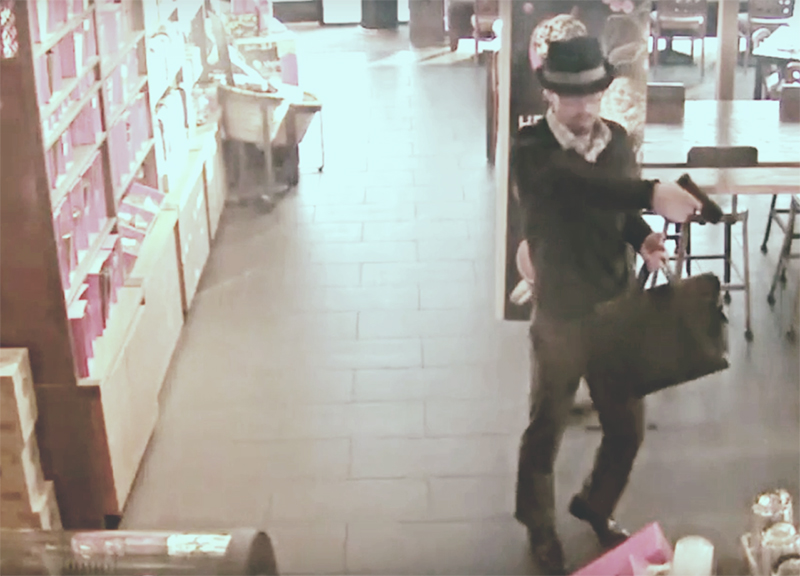 Possible Motives For The Hipster Bandit Who Robbed A Starbucks In Garland.

Garland’s Hipster Bandit is such an obscure criminal, you’ve probably never heard of him.

You can blame the fashionably late cops for that: Only on Monday did the Garland Police Department pay homage to his earlier material from last month by premiering archival footage from what appears to be his debut crime. That effort went down just before 5 p.m. on Thursday, November 19, in the Starbucks at 2135 Northwest Highway.

It’s then that the goatee-clad culture nostalgist — described by WFAA as a “hipster,” and not appearing to be related to San Diego’s Hipster Bandit — robbed the coffee shop at gunpoint while wearing eyeglasses, a navy sweater, a white Oxford shirt, dark slacks, dress shoes and a trilby (and not, the Dallas Morning News accurately reports, a fedora).

Courtesy of the DMN, you can check out the sweet, exclusive lo-fi footage below.

Police released their found-footage film in hopes of identifying the acclaimed cambrioleur, whose work is currently shrouded in anonymity. Early Garland Hipster Bandit adopters are encouraged to share what deets they can to GPD here.

Also not known at this point in the stick-up revivalist’s promising career are his influences. Below, we speculate some on what inspired him to become the buzzing criminal he now stands as.

Possible motives for the Hipster Bandit’s Starbucks robbery.
• Trying to score a sweet perk in the campaign to kickstart the Mystery Science Theater 3000 reboot.
• Looking for a creative way to get the word out about his klezmer trio’s upcoming Verklempt of Court EP.
• Culpholder on his Vespa couldn’t fit his venti to-go order.
• Just a little something special for his Snapchat followers.
• “This instant film isn’t cheap!”
• His typewriter wouldn’t connect to the WiFi.
• Upset that the barista spelled his name “Reid” instead of “Reed” on his cup.
• Buffalo Exchange wasn’t interested in his grandfather’s hand-me-downs.
• Hey, you take the Fiverr gigs you get.
• Angry because he drank his coffee before it was cool.
No more articles