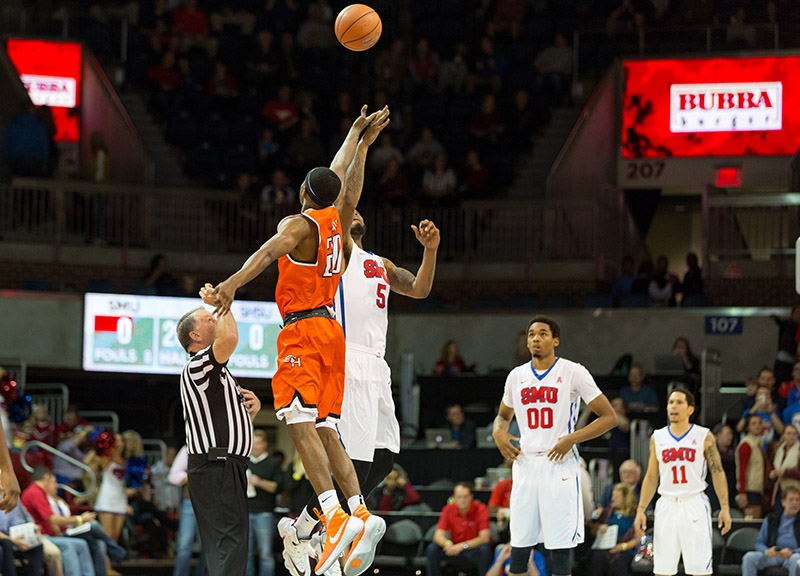 SMU Started Off Its Already Tainted 2015-16 Men's Basketball Season As Well As Could Be Hoped.

There's no eluding the elephant in Moody Coliseum this season. Baskets will be scored and wins (lots of them) will be won. And both of these facts will be celebrated — even as, come the end of each game, the reality will set in that all of these efforts are for naught.

In September, the NCAA announced that it would be imposing various sanctions onto the Southern Methodist University men's basketball program. Among these penalties — handed down following investigations into allegations of academic fraud, unethical conduct and questionable recruiting practices at the school — are fines, a temporary loss of scholarships and probation. Those sanctions in particular are designed to inhibit the basketball program for years to come. Other more pressing and present ones, like the team's ban from 2016 postseason play and the suspension of head coach Larry Brown for nine games season, are designed to penalized the team in the here and now.

Undoubtedly, seniors Markus Kennedy, Nic Moore and new transfer Jordan Tolbert are hit hardest by this scenario. But that's a shame to be discussed at another period.

For now, let's get back to the celebrating: On Saturday night, the Mustangs beat up on the Sam Houston State University Bearkats 85-50 to tip off the new season. The biggest standout performer was freshman Malik “Shake” Milton, who came off the bench to lead the Mustangs with 17 points and four steals.

“He's such a good talent,” associate head coach Tim Jankovich said of Miltion after the win. “But he’s also so poised, and I think he’s beyond his years in the way he plays the game.”

Milton helps solidify a backcourt that was missing some depth last season after SMU got spurned by Emmanuel Mudiay, now of NBA fame. He and fellow freshman point guard Sedrick Barefield will offer defending American Athletic Conference Player of the Year Nic Moore some reprieve from the major minutes he was forced to play last season. Barefield’s time was limited Saturday night due to a high fever he was fighting through in pregame, according to Jankovich, Brown's expensive replacement-in-training and the team's interim head coach during Brown's suspension. But Milton, to his credit, appeared every bit ready to handle his responsibilities and looked as comfortable driving the lane as he did shooting threes, where he was three of five on the night.

It wasn't a wholly smooth opening outing from the Mustangs, though. Passes were sloppy, leading to 14 turnovers — two more than the Bearkats committed.

“First games are hard because you kinda feel you like you know where your starting point is — but you really don't until you get out with the lights and the fans and another team,” Jankovich said of the team's composure in the win.

In the second half, the Mustangs indeed looked better, outpacing the Bearkats by putting up 45 points on 78 percent shooting. The team's starting lineup — now a seasoned bunch with juniors Sterling Brown, Keith Frazier and Ben Moore along with seniors Markus Kennedy and Nic Moore — looked quite comfortable on the floor together. The Moody fans in attendance, among them former President George W. Bush, also relished in the chance to have a first look at senior transfer Jordan Tolbert, who joined the team last year but was forced to sit out due to academic hours required of seniors. The 6-foot-7-inch forward formerly of Texas Tech contributed seven points and six rebounds in his debut and, like Milton, is expected to help the front court replace departed contributors Cannen Cunningham and Yanick Moreira.

The win is a positive start for what will be an emotionally difficult season for the Mustangs.

Jankovich, for one, was impressed by the perseverance shown by the team in its season opener: “It's a tribute to their character that, to me, that team played like a team that is trying to prove themselves that they should be playing in postseason championship tournaments.”

SMU Mustangs guard Keith Frazier (4) returns to the court after facing a suspension that forced him to miss the second half of last season. Frazier finished the game with 13 points and two steals.

SMU Mustangs guard Shake Milton (1) calls out an offensive set during the second half of SMU's season opener against the Sam Houston State Bearkats. In his collegiate debut, Milton shot seven of nine from the floor as well as three for five from the three-point line.

SMU Mustangs guard Keith Frazier (4) dunks during the second half of the team's season opener against the Sam Houston State Bearkats.

SMU Mustangs guard Malik Milton (1) dunks during the second half the team's season opener against the Sam Houston State Bearkats.

SMU Mustangs forward Markus Kennedy (5) eyes the defense in the second half of his team's season opener against the Sam Houston State Bearkats. Kennedy finished the game with seven points and six assists. 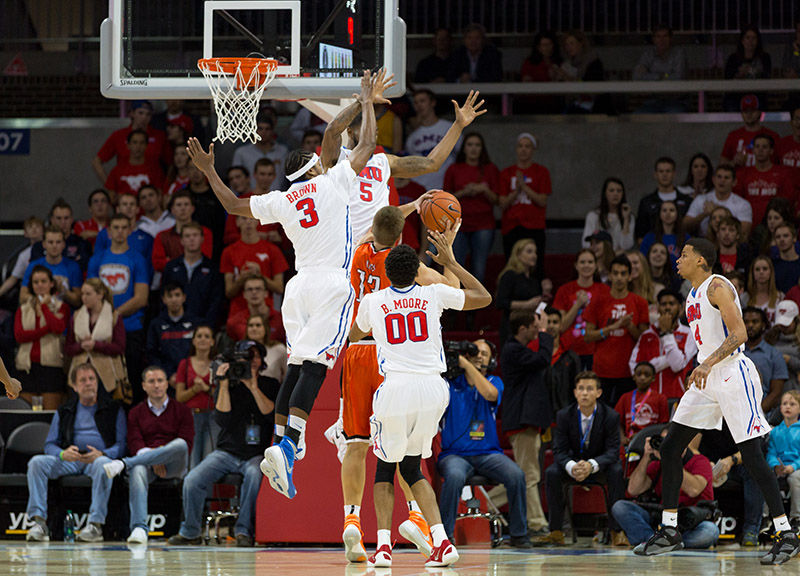 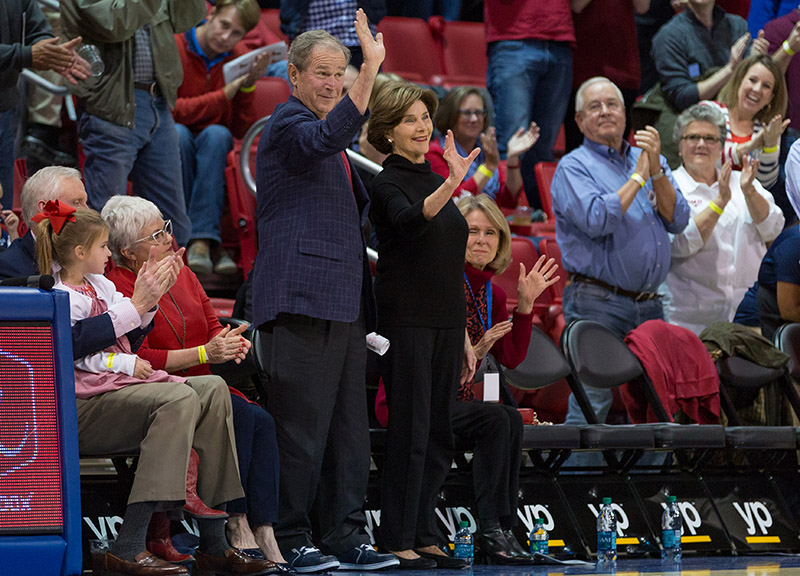 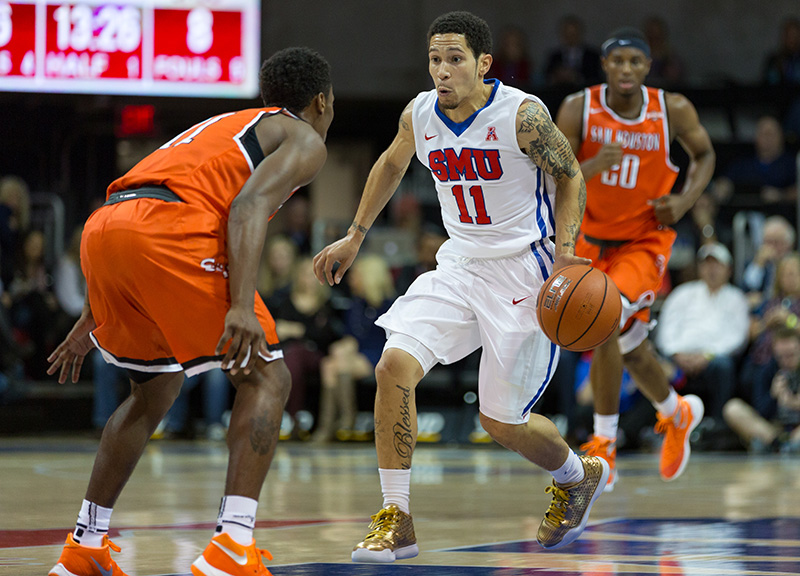 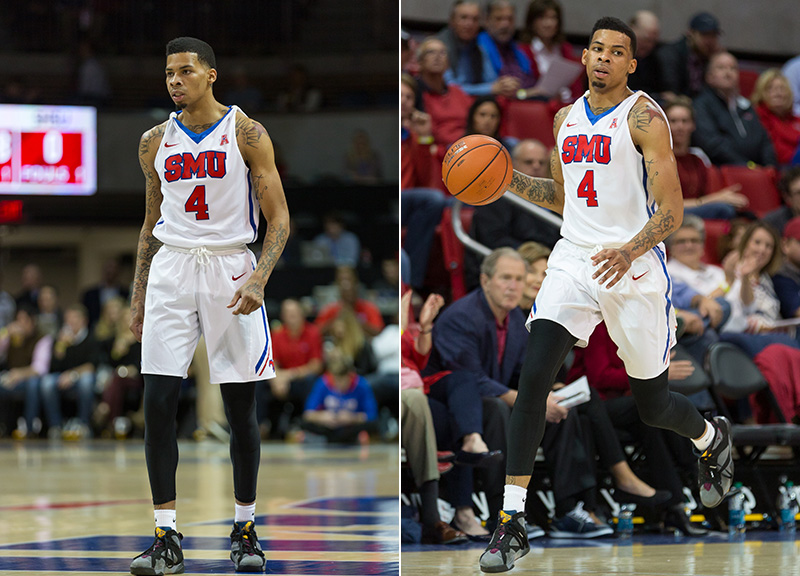 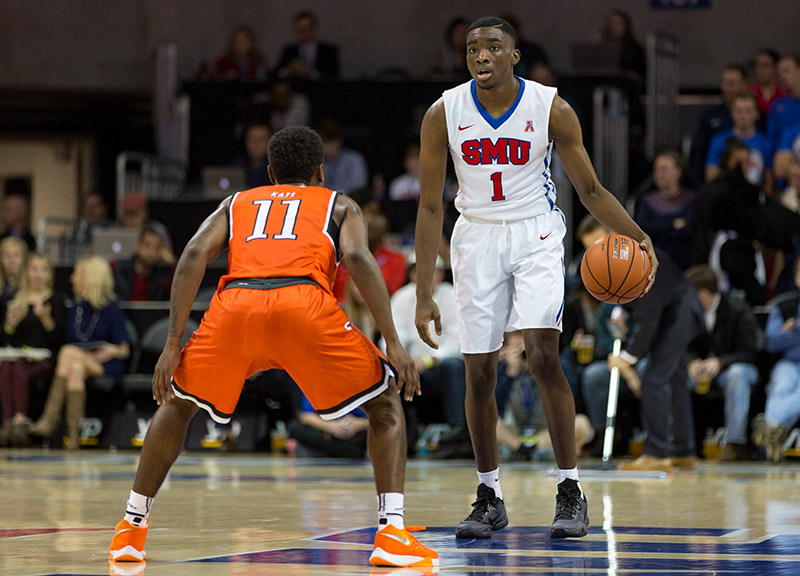 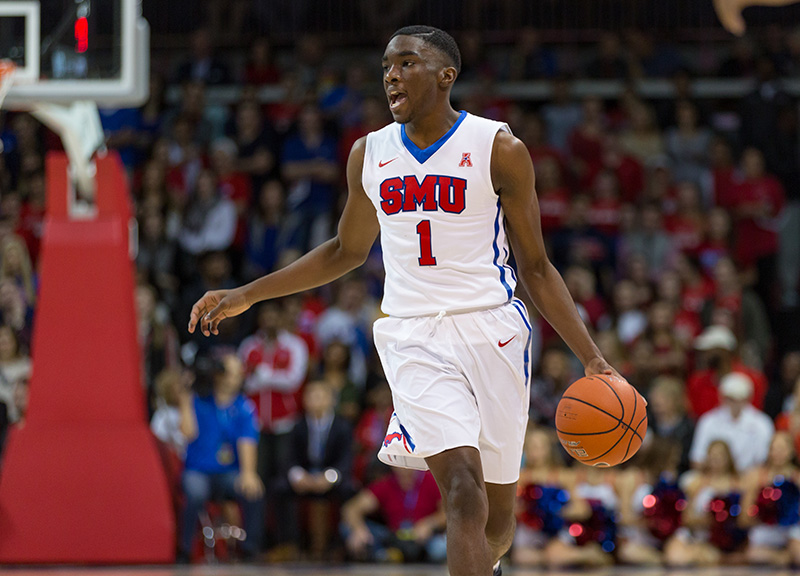 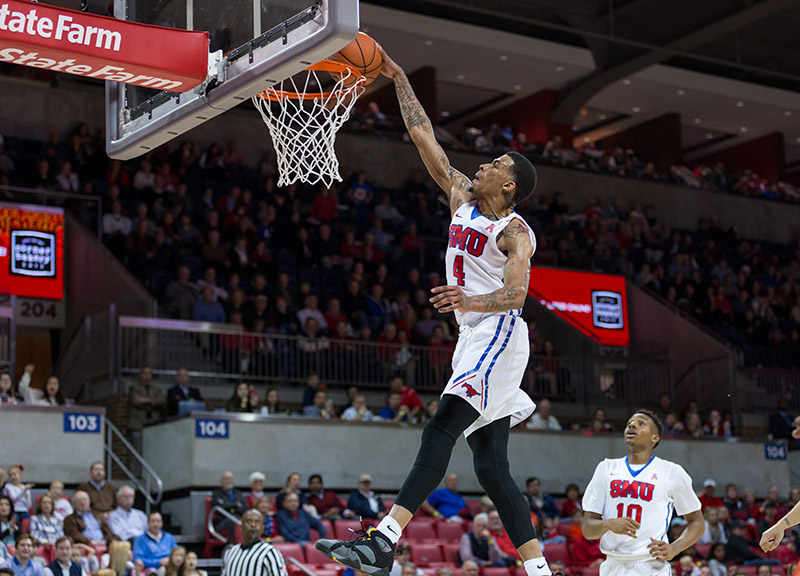 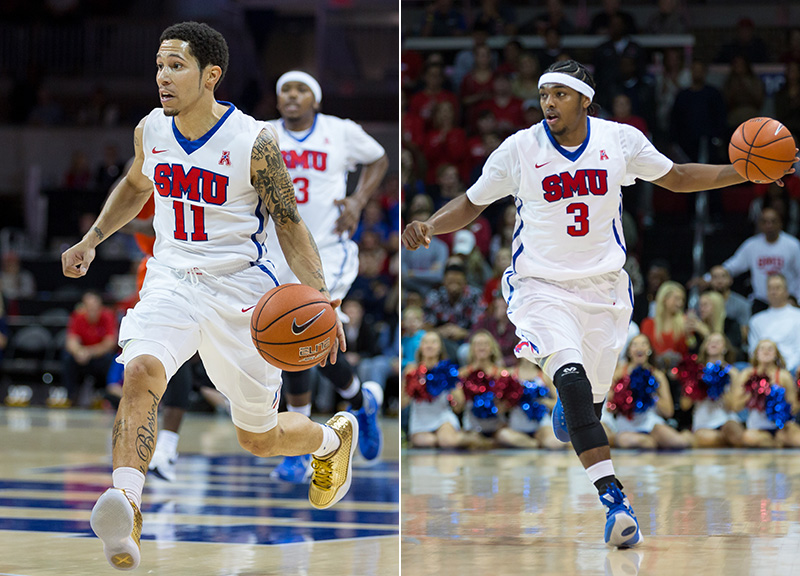 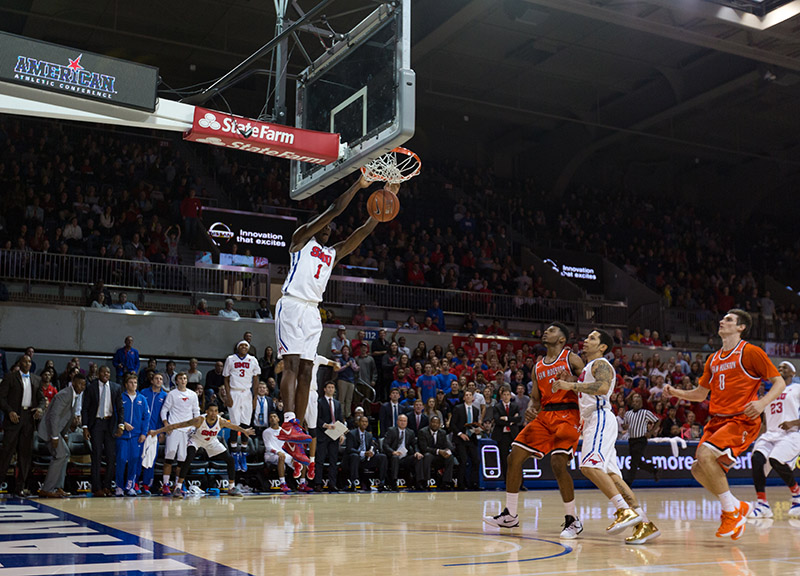 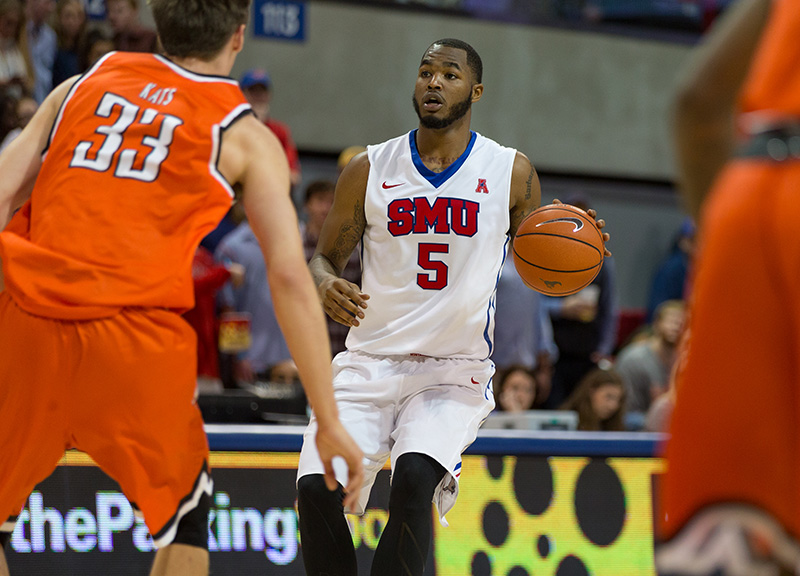 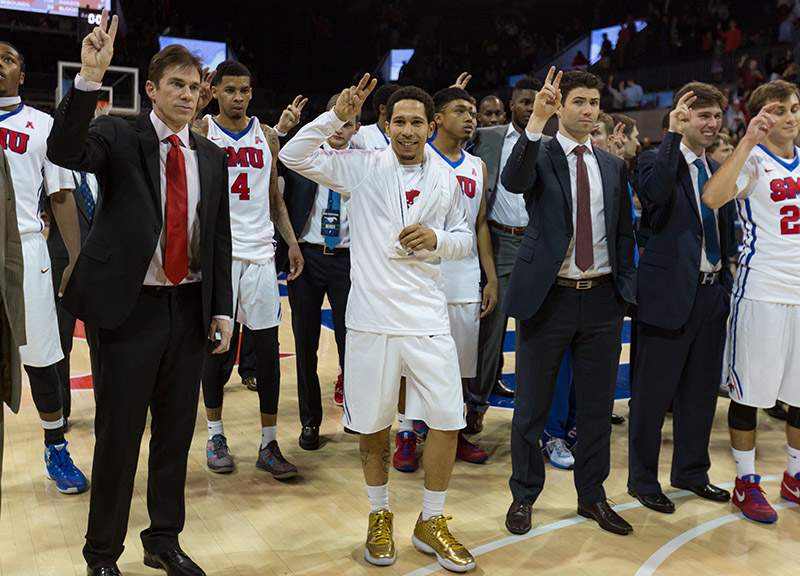