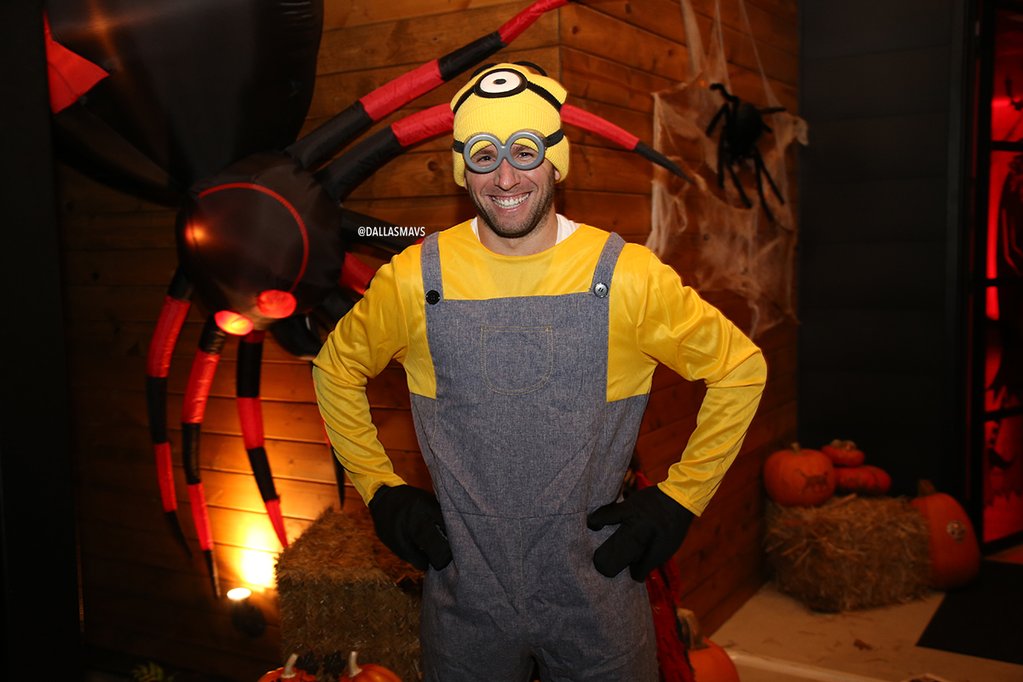 The Definitive Ranking of the Dallas Mavericks' Halloween Costumes.

It's Halloween season, which that means some pretty intricate costumes are coming to a party near you very soon. Or maybe you've already got a glimpse of some pretty awesome get-ups — that's what social media's for, right?

Seems to be in the case of the Dallas Mavericks, at least. Over the weekend, the team threw a Halloween party, and there were some downright awesome costumes worn by some of the players — as well as a terrible one worn by the head coach! (By the way: Happy birthday, Rick Carlisle! May it be a very good one! Also, your costume as bad.)

In honor of that party, let's go ahead and rank all the costumes, starting with coach's.

We think Coach Carlisle has finally accepted the fact that he & @JimCarrey are one in the same. #MavsHalloween ðŸŽƒ ðŸ‘» pic.twitter.com/sXp0qc8mqZ— Dallas Mavericks (@dallasmavs) October 26, 2015

5. Rick Carlile wearing a t-shirt that says he is Jim Carrey This costume is funny, but also terrible and lazy. This opinion is coming from a person who wears normal clothes every Halloween and responds “AN ADULT!” when asked what he's dressed as. But, hey, Rick Carlile does marginally look like Jim Carrey. I dunno, man. Maybe wear any of the outfits Carrey's worn in his large and vast filmography.

4. JJ Barea as a Minion. I'm still not entirely sure what a Minion is or what they're here for, so I just can't ride with this costume. It seems like it's pretty well-made and all, but really: What the hell is a Minion, J.J.? Aren't you too old to know?

3. Deron Williams as Randy “Macho Man” Savage. Very good costume here. Deron Williams looks every bit as flashy and flamboyant as he should. Kudos for the bedazzled glasses too. Here's hoping he didn't go around quoting Randy Savage during the entire party, though. People like that are annoying as shit.

2. Dirk Nowitzki as Lurch from The Addams Family. Dude. Dirk's costume right here is very good. He looks exactly the part — so much so that it's kind of terrifying. No, check that, 100 percent terrifying. He's got the only costume out of the whole Mavs bunch that's actually scary. That's pretty cool. Also: See you in my nightmares, Dirk!

1. Wesley Matthews as a Toy Soldier. OK, this was a very close and hard-fought battle. Dirk's costume was wonderful, I agree. But, ultimately, new Mav acquisition Wesley Matthews has the best costume. I mean, look at the sheen on his pants. You see that sheen? He looks like an actual toy soldier. He looks so real that he's gonna be gifted this Christmas to some unruly child who will almost certainly put his head in their unruly child mouth. Shout out to Wesley Matthews for having a very dope costume. He's the real MVP.