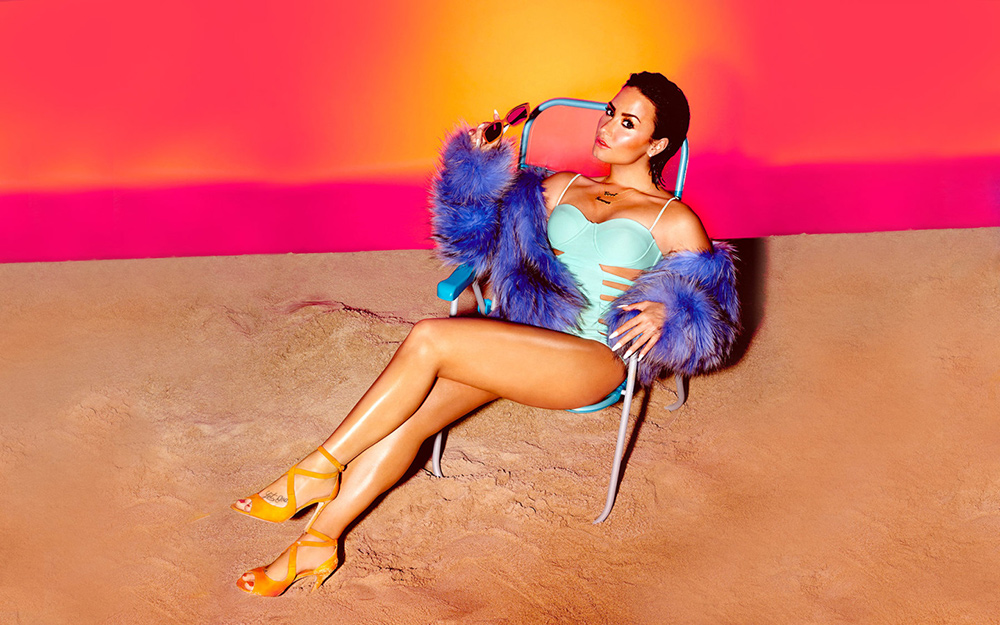 After scoring her second No. 1 on the Billboard 200 last week, we wondered if Selena Gomez would be able to hold on to that distinction for a second straight week or whether another local expat, Demi Lovato, would manage to knock her off.

Welp, the numbers were released yesterday afternoon, and none of those things happened. But the reality, it turns out, was much sweeter with regards to North Texas' domination of the charts: With 98,000 copies of its first non-covers LP moved this week, the Arlington-sprung Pentatonix took over this week's top spot. Lovato, meanwhile, finished a close second, as her Confident LP hit No. 2.

As for Gomez? She dropped to No. 7. Not to be forgotten, meanwhile, is that new The Documentary 2.5 LP from The Game, which features a guest spot from Justus and a re-working of Erykah Badu's Jah Born-produced “On & On.” That one debuted at No. 6.

Yup, that's four acts with local ties in the Top 10 — hell, the top seven — of the Billboard 200 this week. Yes, North Texas owns the pop music game at the moment. And that's to say nothing of Don Henley at No. 38, that Justus-featuring Compton soundtrack at No. 90, Neon Indian at No. 100 and Leon Bridges at No. 163.

Speaking of Bridges and his dominance: It was reported last week that he penned an original tune for Will Smith's new NFL drama, Concussion. According to Variety, the song, which is called “So Long,” could “figure into this year's best original song Oscar race.”

Also still in the national spotlight is the self-proclaimed one-hit wonder Post Malone. The Mid-Cities-sprung rapper did an extensive interview with Noisey this week, where he followed up on the attempted hatchet job he faced at the hands of Charlemagne tha God and premiered a video for his second hit, “Too Young.” Watch that video below.

On the other hand, VIDEO's moment in the sun is just beginning. This Friday, the band will celebrate its debut LP for Third Man Records by performing at Third Man's annual “Devil's Night” Halloween party. From there, the boys will embark on a short tour — one that'll see them playing Dallas on November 14, as part of this year's Elm Street Music and Tattoo Festival. And because none of that's nearly enough, the band also recently premiered a new video shot entirely in the infamous “blue room” at Third Man.

Other records out this weekend include the new EP from Denton's Brave Young Lion. Ahead of the full release, the band just made the disc's second single, “Bleeding Knees,” available to stream below.

Then there's the hella-prolific Claire Morales, who will soon release a new duet album with Daniel Markham called Harmony in Hell. Written and recorded entirely this month, the album's 10 Halloween-themed tracks find the pair leaning hard on the harmonies that have so defined their respective solo projects, while still representing somewhat new territory for each. In addition to the stream below, the pair tells White Noise it's printing up “a ton of download cards with cool illustrations” and scattering them all around Denton this weekend. So, um, keep an eye out.

Another big Halloween record is the new one from Pinkish Black, the band's third. That one showed up in full this week as well, streaming over at Noisey, where it too is paired with an extensive interview piece. Check that out, and find the stream below.

And because the world would stop spinning if a week went by without us hearing from Erykah Badu, she too did an extensive interview with Noisey this week where she mentioned, among other things, that the mixtape with her locally-showcasing “Hotline Bling” cover will be released next week.

Meanwhile, Denton's Caleb Ian Campbell will pack up and move to Miami Beach this weekend in order to more easily facilitate touring the East Coast with his new project. That project would be Ari Roar, which released a five-track EP late last month. Check it out.

Another recently released little local gem is Kevin Aldridge & The Appraisers' new single, “Winner Leaves Town,” which the band released earlier this month at Fort Worth's most recent Arts Goggle. It's the first taste, too, of four new Jordan Richardson-produced tracks currently in the works.

Also just released is Brandon “I been grindin' since I was 12” Fxrd's new Hardaway LP. If you dig aggressive-yet-minimal aesthetics and rhymes about high schoolers drinking Crown, this one's for you. Check it out.

Still in the works, meanwhile, is a new LP from Northern National that's due out in early 2016. In the meantime, the band will be holding a release party for its new single, “Love is Fire,” at a yet-unannounced venue on November 13. Keep your eyes out for more details on that one. For now, the band's letting us debut a stream of that song below.

Likewise, Jonas Martin has got a new album of his own in the works — a sophomore record for which he just raised more than $11K via Kickstarter. Look for that one sometime in the spring. Before that, though, as a way of saying thanks for helping him reach his funding goal, Martin's released a new tune called “Let Them Drown,” which can be streamed below.

Speaking of crowd-funding campaigns, Fort Worth metal venue The Rail Club just launched one to help pay for some renovations. Some of the planned improvements including making the stage larger in order to attract bigger acts and improving the P.A. Help the spot hit its $10K sweet spot here, while earning tickets to the joint's Christmas blowout.

Over in Deep Ellum, on the other hand, Dada unveiled a complete revamping of its own P.A. system over the weekend — one that it paid for all on its own somehow.

But, hey, there's nothing wrong with asking for a little help sometime. And, this Sunday, Rubber Gloves is asking for a little of just that to help clean up the place. Bring your own gloves, owners say, because, among other things, you'll be pulling weeds and doing some light landscaping. There'll be access to a free keg for those that put in work.

And a month before it hosts its final show (in its current location, anyway), Denton house venue Macaroni Island hosted the last-ever Blank-Men show this past weekend. They will be missed.

Finally, as we're wont to do, we'll leave off this week's music news and notes with a few quick-hitters:
• Over the weekend, tickets went on sale to the first-ever Off the Rails Country Music Festival, which will host acts like Blake Shelton, Eric Church, Chris Young and Sam Hunt during its two-day run at Toyota Stadium next April.
• Local acts Oil Boom and Quebe Sisters were among the first crop of acts announced for SXSW 2016.
• Denton's almost-annual Rock Lottery returns to Dan's Silverleaf on Saturday, November 28.
• Hand Drawn Records' new, all-analog, direct-to-vinyl compilation will earn its release on November 20.