[Q&A] William Shatner Fears The End Of The World. 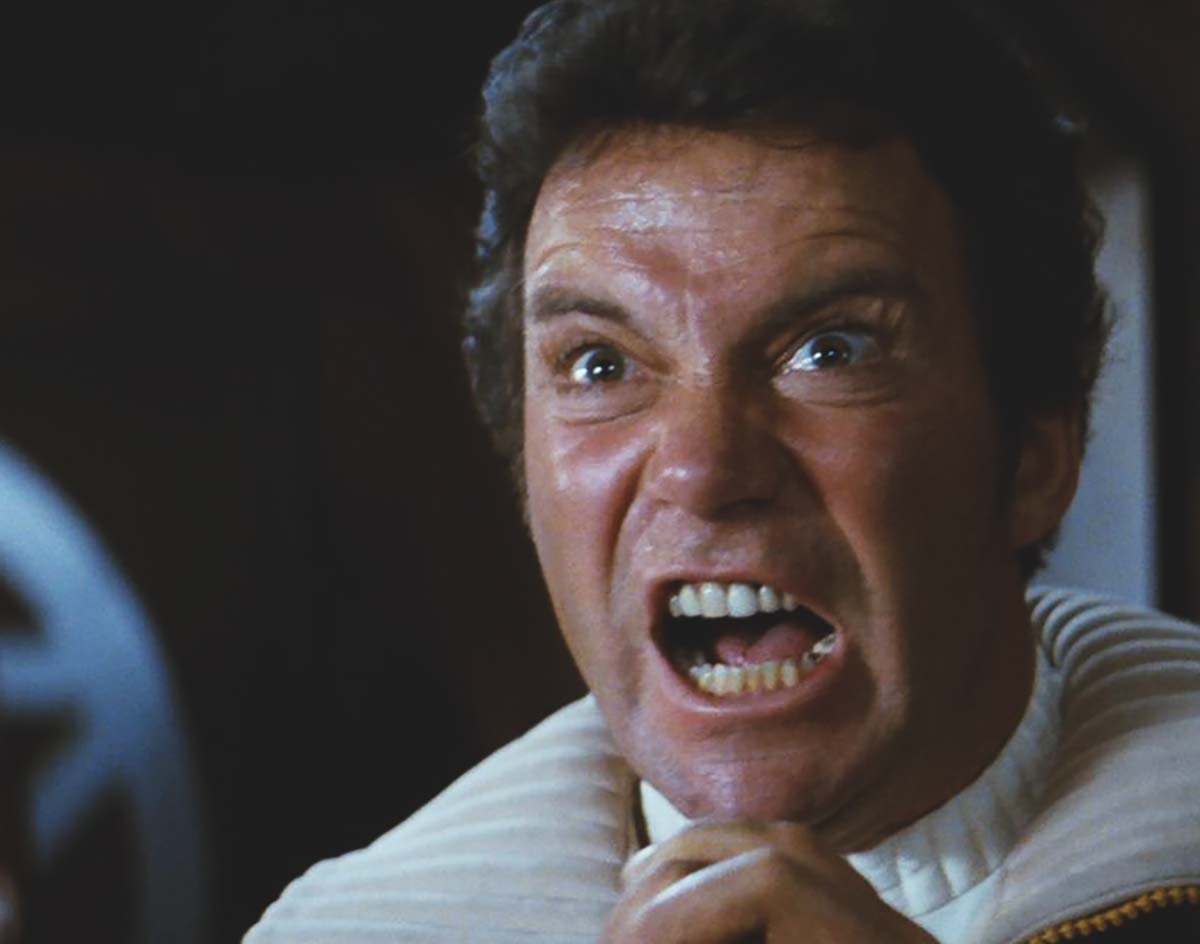 Before Hosting A Screening Of The Wrath of Khan In Irving This Weekend, The Iconic Actor Talks Human Invention, Climate Change And His Love Of The Blues.

For almost 70 years now, Williams Shatner has been living to entertain.

After first coming up as a stage actor in the 1950s and transitioning into Hollywood film work by the end of that decade, the now-88-year-old performer eventually found his footing as a working television actor in the 1960s, appearing in iconic episodes of The Twilight Zone and as a go-to guest star in the vein of Once Upon A Time… In Hollywood‘s Rick Dalton in the early part of that decade.

In 1966, though, he caught a big break: After a first attempt at a Star Trek pilot floundered, Shatner was brought in to replace the initial actor cast in the role of the ship’s captain. For the next three years, he would embody America’s fascination with space exploration as the rebellious but ethical Captain James T. Kirk — a role that, for better or worse, would define the rest of his career.

Things weren’t supposed to shake out this way, of course: As we all know, Star Trek‘s original run on the small screen was mostly a commercial flop; it wasn’t until the series earned a dedicated fanbase through syndication that it started down the path toward becoming the cultural phenomenon it remains today. But, even then, it was a bumpy road: Spurred on by the popular conventions that the show’s fans would host to celebrate all things Trek-related, Hollywood green-light 1979’s Star Trek: The Motion Picture in hopes of capitalizing on the show’s cultish, unwavering support.

That return to Star Trek ended up earning mixed reviews and a lukewarm box office — but it was enough, it turns out, for the studio to OK a sequel, albeit on a lesser budget, and give the franchise one last push.

The resulting effort was 1982’s Star Trek II: The Wrath of Khan, a critical and commercial success that not only in many ways saved the brand but that remains considered by many to be its height. This weekend at the Pavilion at the Toyota Music Factory in Irving, Shatner himself will be on hand to host a screening of the film and to answer fan questions about it and his winding career.

And it has been a winding career. After four more films in which he reprised his role of Captain Kirk, Shatner has remained as comfortably in the spotlight as ever, performing (among other roles) a memorable turn in the Miss Congeniality film series and an award-winning run as Denny Crane in The Practice and Boston Legal, along with embarking on one of the weirder musical careers in memory.

So, yeah, we were thrilled when we got the chance to speak to Shatner over the phone in advance of his appearance in town this weekend. We were even more stoked that he seemed game to talk about a variety of topics over the course of our chat — from the optimism of Star Trek and the horrors of climate change to the marvels of human invention and his new foray into blues music.

You’re coming to town to host a screening of The Wrath of Khan at the Pavilion at the Toyota Music Factory. Can you tell us a little bit about what your plans are for the night?
Well, we’ll play the movie on the big screen with the big sound — and it’s a terrific film that holds up very well. Then I’ll come out after the film is over. I’ll come out for an hour, and entertain you for an hour with something that’s totally live and spontaneous. I’ll take questions from the audience, and it’s just a great deal of fun — and with lots of information. It turns out to be a great evening: You’ve seen a terrific film, and then I come out and make you laugh I hope, and maybe cry, and just inform you on it. It really is different.

You already hosted a run of these screening engagements last spring. How’d that first run go?
Each one is really its own entity. The audience wants to know something different each night, so it’s a new show every time — other than the movie, of course. People will come up and ask questions, and then I’ll share stories. There’s been laughter and cheers and moments of great sharing. It’s just the theater! It’s a live experience.

It’s been 50 years now since the original Star Trek series has been off the air. It’s obviously remarkable that the interest is still there — to the point that CBS is now even releasing new series relating to the franchise.
Absolutely. And the the importance of this movie is that it was very possible that the Star Trek phenomenon would have ended with the first movie — which they just called “The Movie,” and they spent a lot of money on. But they decided to take a chance and make one cheaper, and if it didn’t work, that would’ve been the end of the Star Trek franchise. But it turned out to be very popular! So, there’s every reason to believe that this movie begat all the other Star Treks.

Is it fair to say that’s why this is the film you’re touring?
Yes, its significance in the hierarchy of Star Trek. This is a significant film. So, yes, that’s a reason for touring and bringing this one out. But also it was popular. And it is a good movie.

I mean, yeah! All of the above! Being that we’re almost 40 years removed from this film — and, again, half a century on from the original series ending its run in TV — we’ve seen a lot of the world kind of catch up to the fantasy of the show, just in terms of technology. How surreal is that to you as someone who’s been involved in it all along the way?
Well, the imagination of writings — and science fiction, in particular — is such that, if you wait long enough, these things do eventually come true. And we’ve certainly waited around long enough for it to come true! Things that were imagined 50 years ago are becoming practical — like even just the telephone. But the idea of the future existing, and that we will still be around 300 years from now, is also a beautiful thought — because, as we all know, there is a strong possibility that civilization as we know it could end.

Is that something you think often about — the end of the world?
I’m concerned that the world might not exist for our children. Absolutely. I know there’s some sentiment about the fact that it’s not happening, but I want to assure you that it is happening. Climate change is real.

Do you think Star Trek holds any answers for scientists looking to solve this crisis?
We as human being are so inventive and so capable of of doing miraculous things that later on have no explanation. The making of the pyramids is coming to mind. Like, 5,000 years ago, they did the whole thing — and we have no idea how they did it. Just yesterday, I said to somebody else who mentioned this subject, “Well, we do know. It was the ramps.” And they said, “No, no. The ramps being what they used for bringing a block of stone up, that’s been discarded. It’s not the way they did it.” So, we don’t know how they did it! That’s how inventive mankind has been. So there’s no reason to think that we couldn’t invent ourselves out of this mess. Will we invent it? I hope so.

One thing that’s ultimately true about Star Trek is that, whereas so much of today’s society feels pessimistic, Star Trek is remarkably optimistic.
Exactly. That’s the beauty of Star Trek, its optimistic view of humanity and mankind.

Is that a notion you personally return to when things feel difficult?
Yes. I often rely on my ability to believe in the ultimate intelligence of mankind. Whether it’s been inculcated by my association with Star Trek, I’m not sure. But it’s certainly been part of my education.

Your life’s education, I imagine, is pretty vast just through your varied experiences in the arts. You’ve done spoken word. You’re a theater actor. You’ve done films. You’ve done TV — some truly classic TV. You’ve done music. Does this performance incorporate all those elements?
No, not really. I’m not doing any music in this stage show. But I did just finish a blues album. I just laid down the last tracks, actually. Now, they’ve got to do all the production on it, and it’ll be out in the months to come. What I can tell you is I approached that slowly. I didn’t know whether I could do it or not. When, finally, I entered the studio, they had a couple of songs ready for me to cover, and I looked at it: Where do you place your voice? What’s the track here? What do I do? And with a little experimentation, I think I found it.

What sentiments are you expressing in these songs?
I’m expressing, through other people’s material, the overwhelming-ness of life, whether it’s minutia like the girl not showing up or that the devil is coming for you. I mean, there are all kinds of blues. “Crossroads” is an interesting song — I laid that one down yesterday. The key to “Crossroads” is laying down your baggage — that’s one of the lines in the song. Usually as an actor, I’m trying to find the through-line of the song, and I realize the song “Crossroads” is saying, “I’m tired and I’m laying down my baggage.” So you sing that, and that becomes my expression of the blues.

William Shatner hosts a screening of Star Trek II: The Wrath of Khan at 6:30 p.m. on Saturday, February 15, at the Pavilion at the Toyota Music Factory. Head here for tickets and more info.