[Q&A] The Goodfellas Of Fachini. 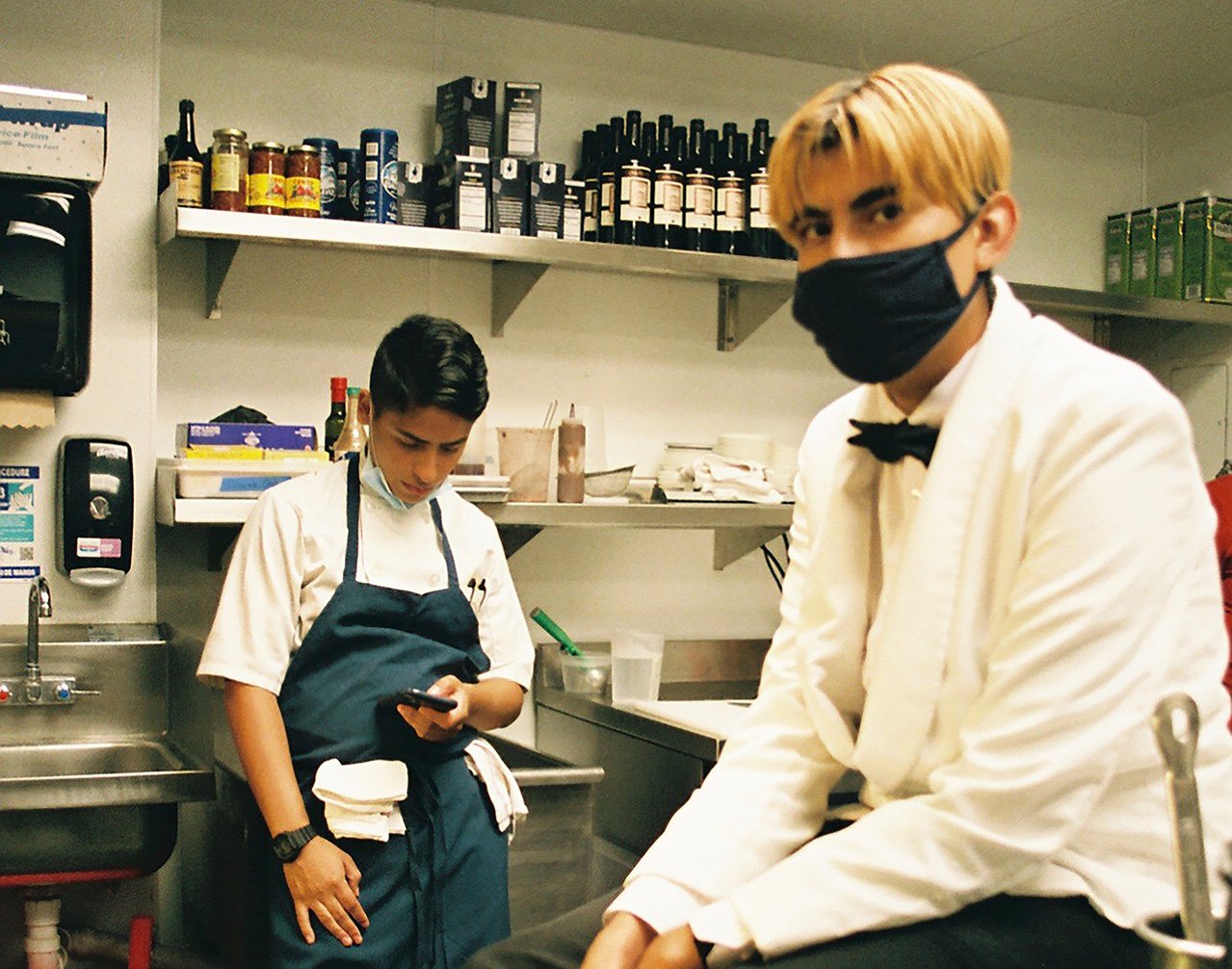 Get To Know The Creative And Multi-Talented Back Of House Staff Behind Some Of The Finest Italian-American Dishes In Dallas.

A warehouse party with a bunch of graffiti artists is the last place you’d expect to find someone that spends the majority of their time in Highland Park Village, dealing with some of the most decadent Italian-American dishes the Dallas restaurant scene has to offer. And yet, Fachini exists.

Fachini is the fourth restaurant by renowned chef-owner Julian Barsotti that focuses more on the Italian-American cuisine we’ve seen prepared in our favorite TV dramas: calamari, meatballs and veal dishes — only fancy as hell. 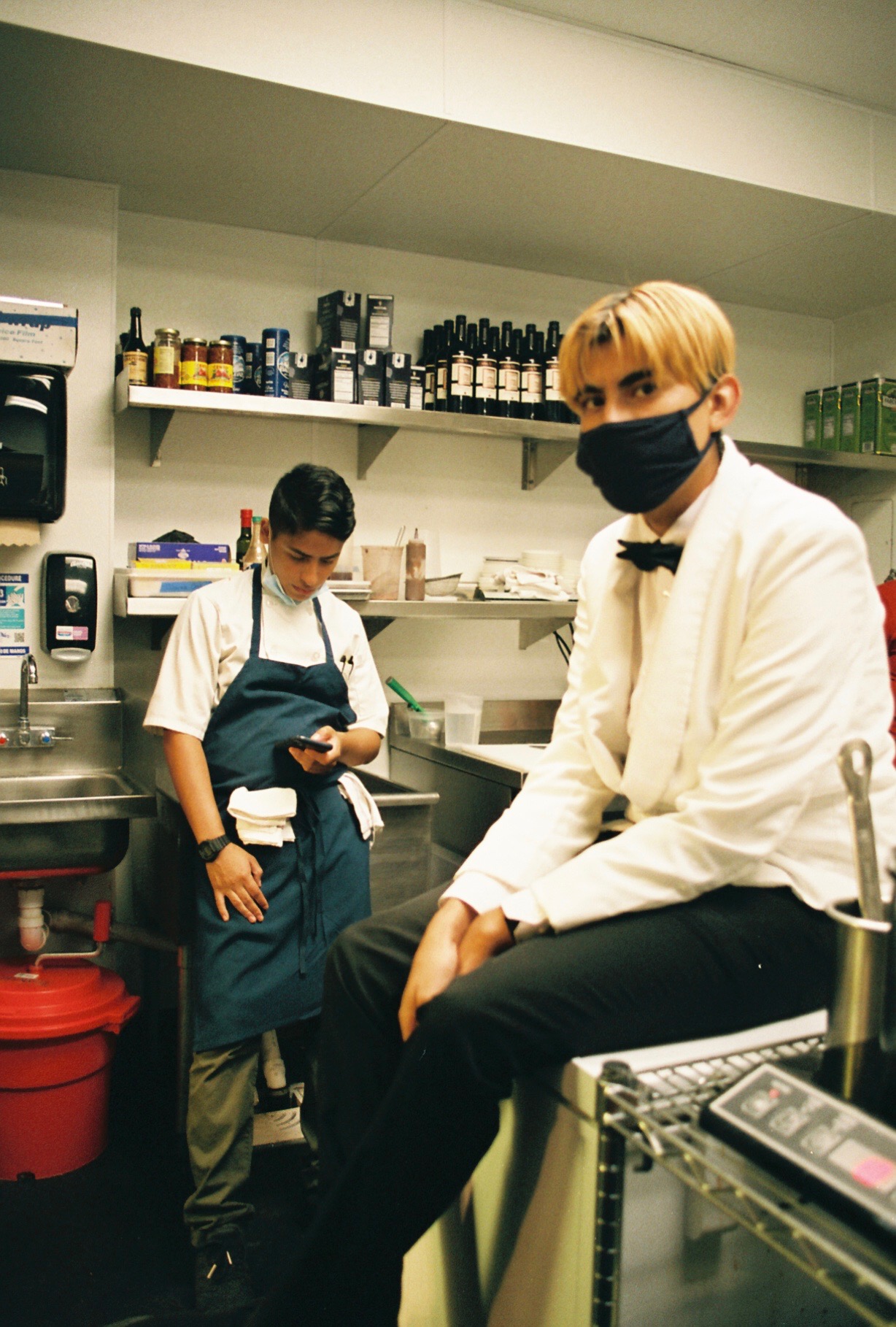 It’s the type of place where you would run into the most stereotypical of your television favorites like Tony Soprano, or in a realistic world, Jerry Jones. In simpler terms, it’s luxury eating. It’s your favorite Italian dish made fresh and fancy, just like in the old world, except familiar enough that your second-generation uncle from Staten Island could appreciate it.

So, who exactly is behind the celebrated 100-Layer Lasagna in a restaurant that transports you right into a Scorcese film? For starters, it’s not a stuffy, know-it-all egomaniac parading around in a chef’s coat or a made man’s tommy-gun-toter son. 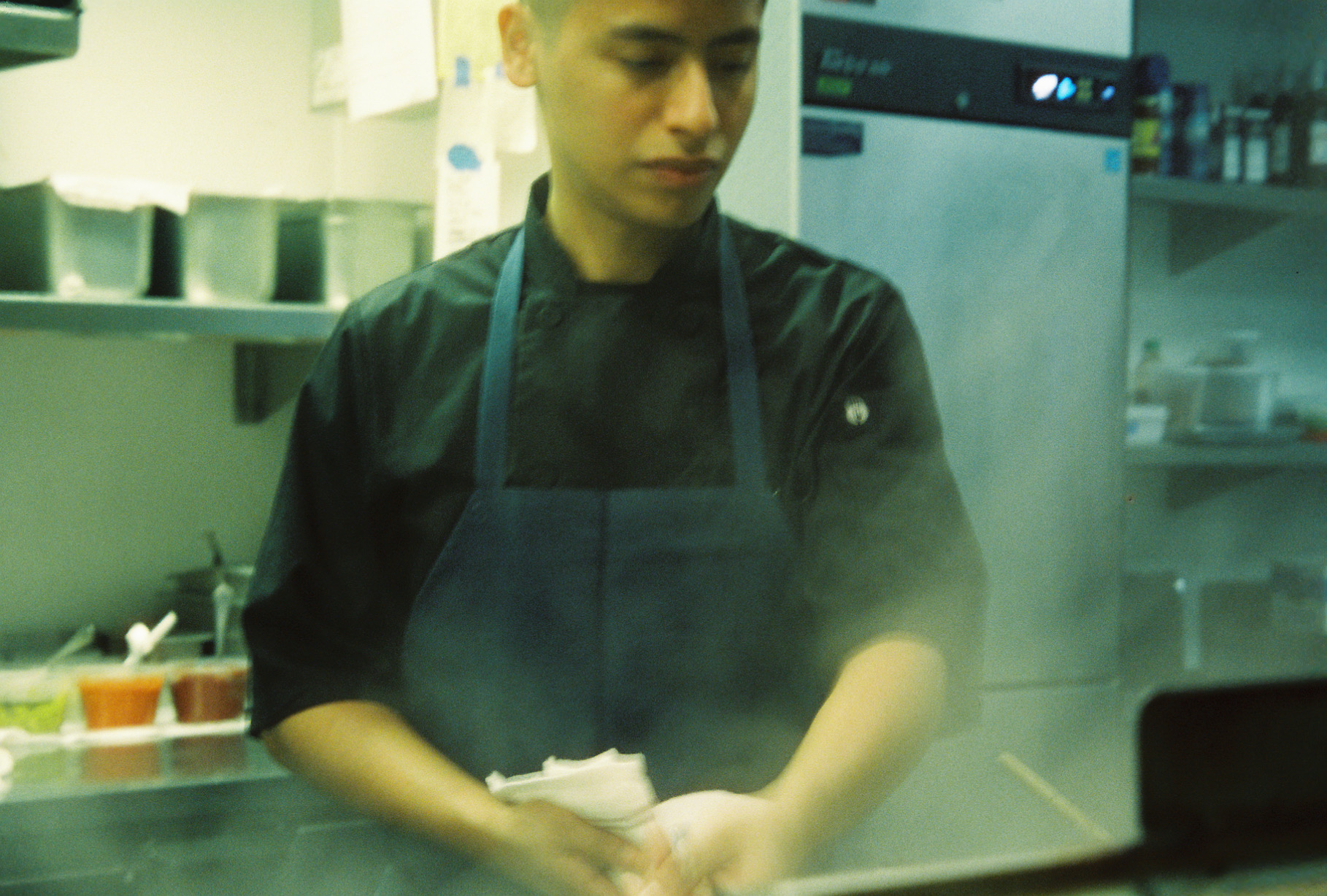 Let’s dive right into it. At 25 years old, you’re one of the youngest known executive chefs in Dallas. How did you land such a sick gig so quickly?
Honestly, I dedicated the last six years of my life to one thing and one thing only and that was to better myself as a cook. I was fortunate to work under some very talented chefs and was able to receive the proper training I needed working at Nonna. I didn’t go to culinary school— Nonna was my school. I would have worked there for free if it wasn’t for having to pay bills. I didn’t care, I was just hungry to get better.

That ambition has to translate into something eventually, right?
I was given the opportunity to help open Fachini as the sous chef. That was my first ever “chef” position. It was a tough opening and many mistakes were made, but I learned from my mistakes and quickly became a solid sous. After a year into being a sous-chef, the position for head chef was available and Chef Julian had a strong belief that I could fit the position. Now, it’s been over a year as the executive chef of Fachini and I couldn’t be happier.

It seems like you’re off to a great start. What do you hope to achieve in your culinary career?
First and foremost, I hope to keep bettering myself as a cook and a chef and be able to make Fachini the best restaurant it can possibly be. The long-term goal is to create a business plan for myself to open up my own restaurant. Once I figure out how to properly run my own restaurant, the plan is to open several more after that including a Peruvian restaurant. My biggest dream is to introduce Peruvian cuisine to the people of Dallas and help make a positive impact in our city through my food.

How would you describe the overall dynamic within your back of house staff?
We’ve all struggled together through some tough nights getting our ass kicked, and we’ve all come to an understanding that unless we work as a team, we will continue to get our asses kicked. We have a mutual respect for one another, and we know every person in this kitchen has a purpose of being here. Without each individual, we can’t execute the way we need to execute. We spend more time together than we do with our own family and friends, but we’ve grown to enjoy each other’s company and figured out that there is a way to grind and also have fun and mess around. Life shouldn’t be taken that seriously.

How does that close-knit relationship guide your leadership?
I keep a close relationship with every person that works in the kitchen and thankfully I know most people’s strengths and weaknesses and I go off of that to make us stronger as a whole. Put the right people in the right places and let them stand out on their own. Push them to be a better version of themselves not push them to be a version I have in my head. At the end of the day we’ve all learned and grown in a natural way as a team so that’s the way I’ve tried keeping it, so that’s how we function. I try and direct what I can and I let everything else flow. 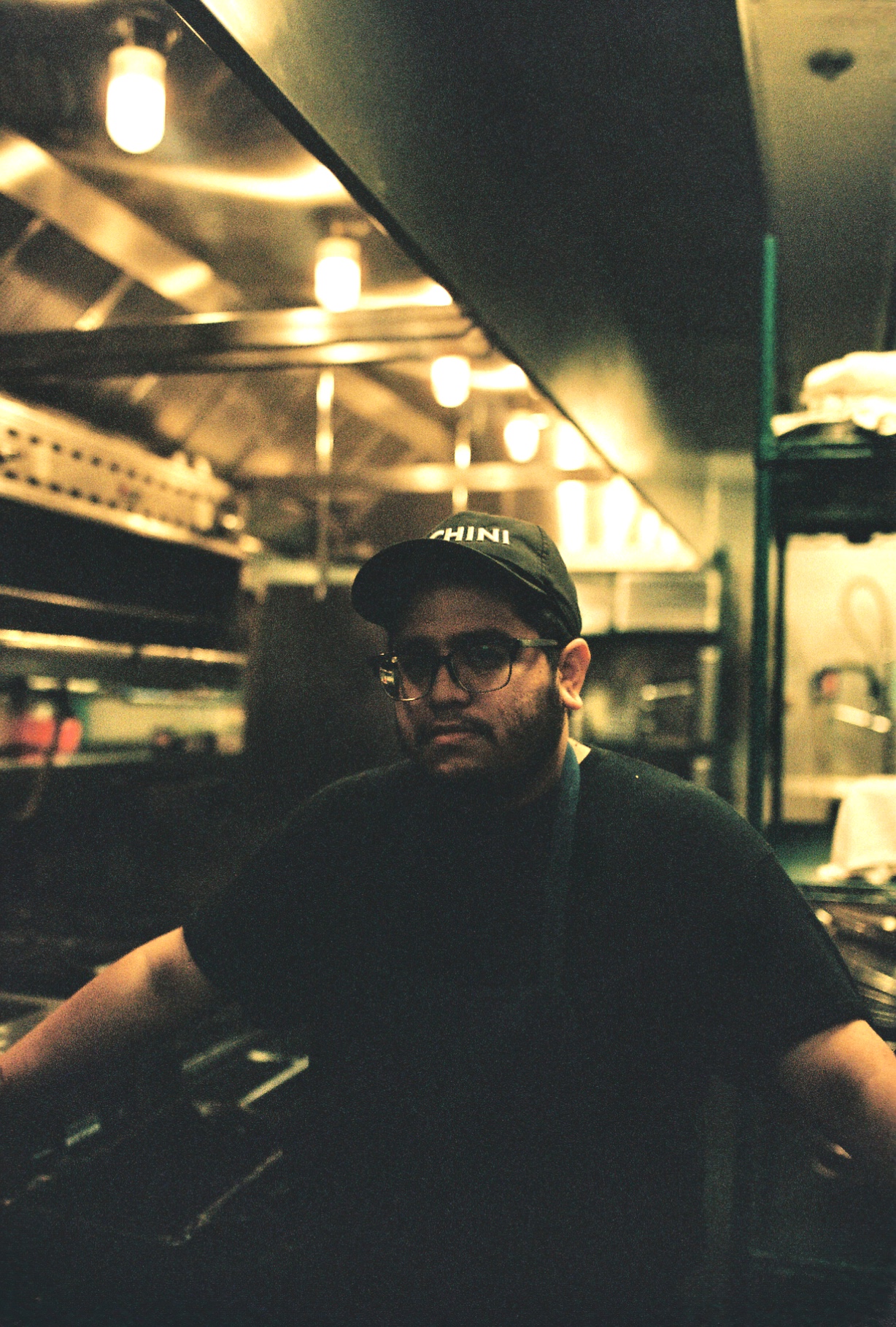 What’s up, dude? How’d you end up at Fachini?
So, I worked for Mcrowd for a couple years as a cook, sous and head chef. Following that, I started working under Julian Barsotti, looking for a more family-oriented work environment. After a few years and working at all four of his restaurants, I was offered the position of sous-chef at Fachini.

You have other visual pursuits outside of the restaurant industry. What are some of them?
I do a lot of things aside from cooking. My hobbies are photography, painting and procrastination. I would like to learn how to screen print and maybe start a small screen-printing gig.

What’s the biggest lesson you learned working at Fachini in the last year?
It’s definitely taught me patience and understanding, which I’m still working on. When you’re coming up with old-school chefs, their mentality is hard to break away from. You can’t expect everyone to think and work like you because not everyone went through the same “training” as you. And also treat others the way you want to be treated. Which is definitely something I live by and was raised within my household.

If you were stuck on a desert island with the Fachini team, what three items would you make sure you brought with you?
If we were stuck on an island, I would bring a knife, a case of tequila and a karaoke machine because if we’re going to be stuck, we might as well have fun! 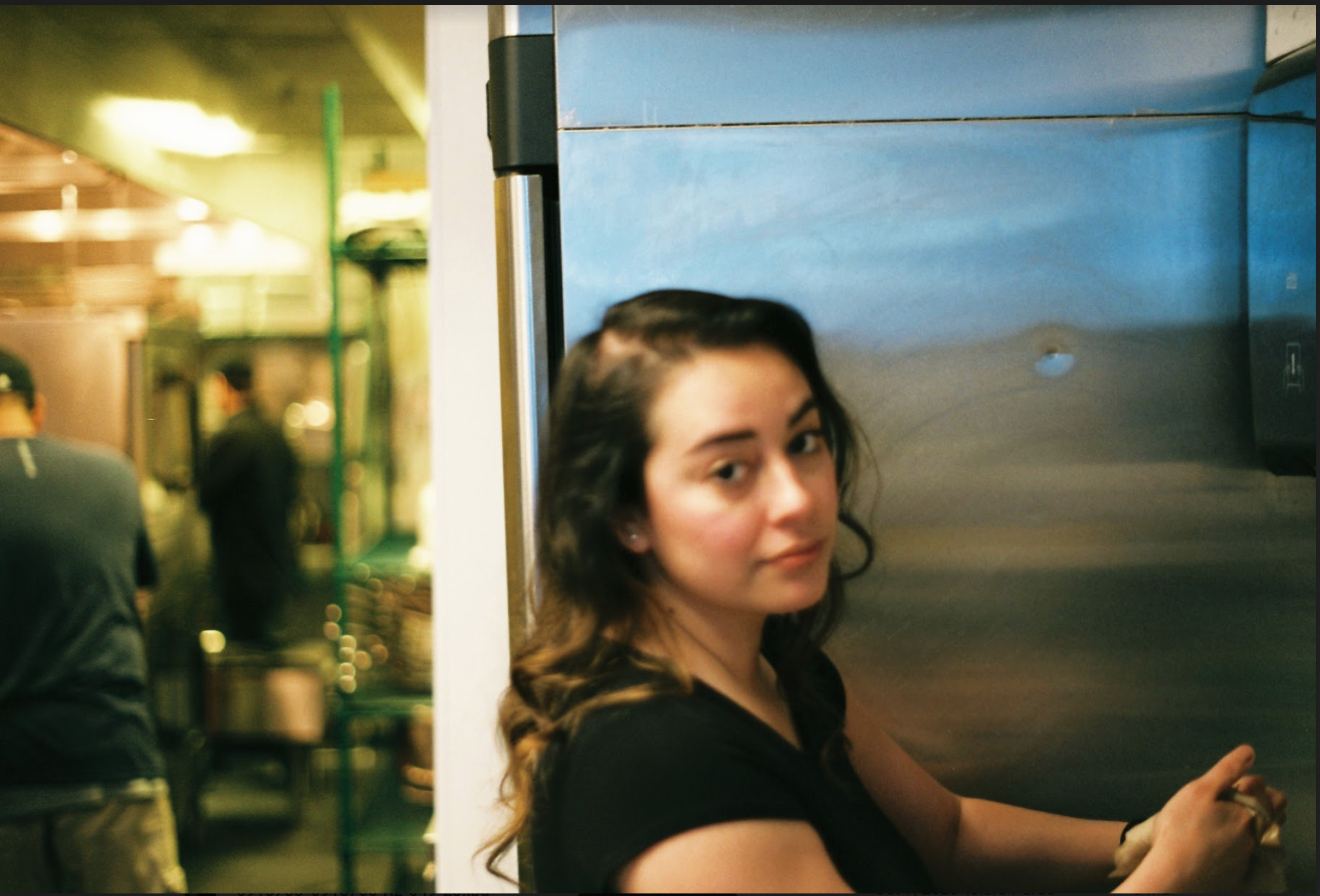 How long have you worked at Fachini?
1 ½ years.

Being a woman in the industry and in a position of authority, what’s the biggest lesson you’ve learned so far?
I’ve learned that it won’t always have to be a ‘boys club.’ Fachini has two managers and we’re both women. There have been countless times a guest has expected a man to come behind me to fix the issue — just like most professions, this industry can be a hard place to be, especially for women. But, once you’ve found your place and remember how you got there, there’s nothing that can take that away.

There seems to be a theme of strong leadership within the Fachini staff, be it front or back of house. How does that work?
Fachini is such a cool place to work because our staff is super helpful to one another. I thought we were closer before but after the pandemic, it became like we could almost just feel what or who needed a hand. In some places, you’ll see managers just walking around and telling people what to do. A good manager or leader helps out as well. It got to where I could jump behind the salad station when we were busy and help out there too. Everyone at Fachini does so many different jobs so we’re all pretty trained to jump into anything when needed.

The staff here is clearly very close. What’s your relationship with your team members like?
I know it’s corny and said often but I honestly consider them family. It’s great to be around people you sincerely like and respect every day.

If you had a microphone that broadcasted your voice to every single person on the planet, what would you want everyone to know?
Doing the right thing will always get you the place you are supposed to be. Having heart in whatever you do is the only way to be. Also, never trust anyone who doesn’t know at least two of the verses in ‘Knuck If You Buck’.