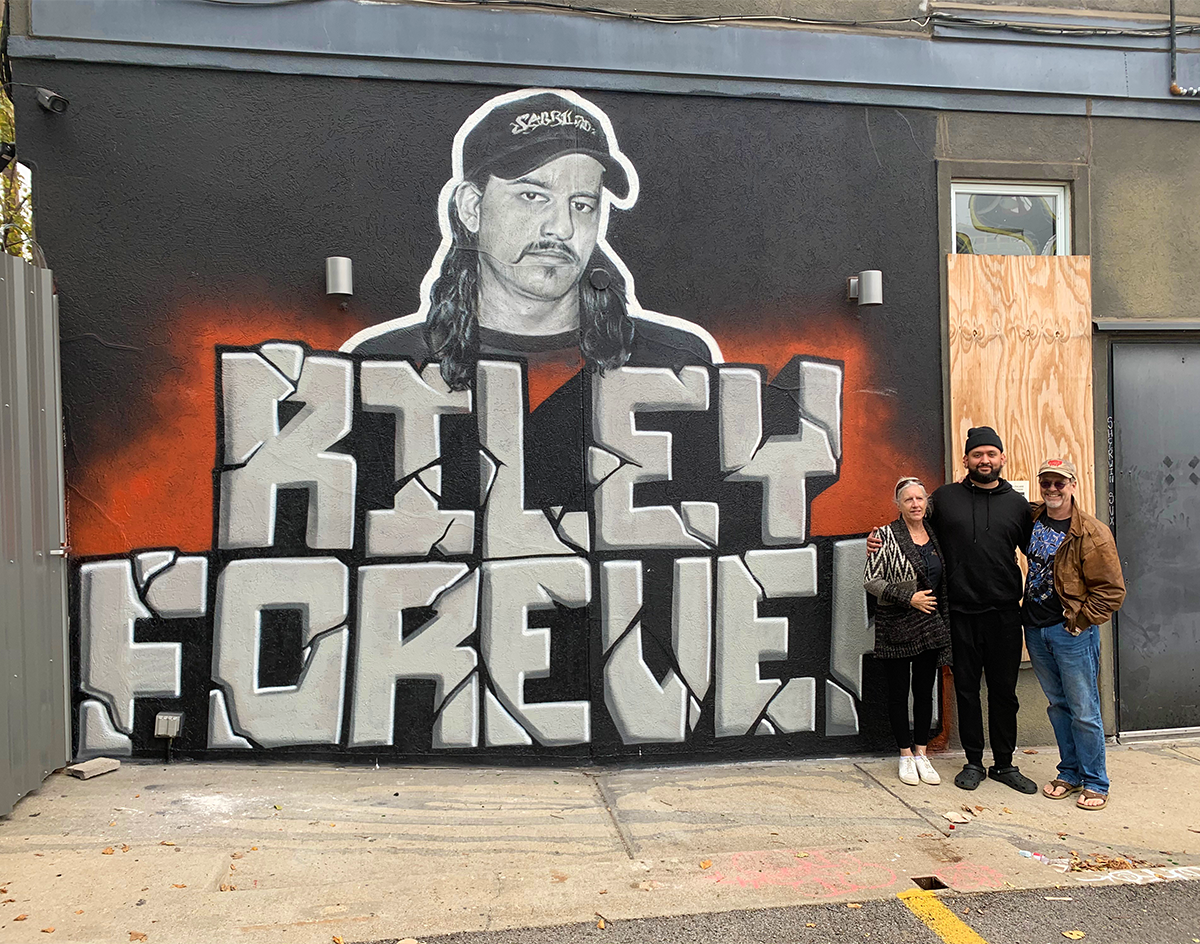 [Q&A] East Dallas Artist Solomon Shares His Thoughts On The Late Power Trip Frontman Riley Gale And How Staying True Can Take You Around The World.

Riley Gale’s sudden passing earlier this year sent a ripple effect across the globe. The late frontman of the Dallas-based thrash metal band Power Trip touched thousands of lives from around the world. It was evident in the thousands of tweets, videos and memorials that surfaced after the late singer’s death.

But what about the hometown tributes right here in East Dallas?

We recently caught up with the multi-talented and mononymous graffiti artist Solomon (not to be confused with the guerilla Dallas sculptor of the same name), who, along with artist Samo, is responsible for conceptualizing and creating the Riley Gale memorial mural that recently popped up on the side of The Nines building in Deep Ellum.

Solomon has done it all, seen it all and even has the tour shirt. And yet, somehow, he still has more to do.

For the former East Dallas native, multi-hyphenate artist and invaluable family man and friend, when you stay 10 toes down and stand up for what you believe to be true, you can do anything.

In a time where authenticity is hard to come by and our time on this planet is so ephemeral, Solomon is determined to continue pushing on to preserve not only the legacies of his friends that have passed but his own as well.

After all: Matter cannot be created or destroyed, it just changes.

Hi! Real quick: Who exactly do you think you are?
Ha! What a tough question, man. Uh, I’m just little ol’ me – Monica and Carlos’ son, un vato muy sencillo y humilde [a very simple and humble guy]. I’m a foo’ that’s happy to still be along for the ride.

Clearly you are a visual artist, but we know that always comes with a little more to offer. What are all of your creative talents?
“Multifaceted” is a word that I think describes me pretty well. My grandma always says my hands are blessed and I guess she’s right. I’m a tattoo apprentice but I also have a day job as a graphic designer. I run a clothing brand and I can cut hair. I’ve sprayed graffiti for the last 15 years, allegedly. I can roll a nice joint and I make some pretty fire enchiladas verdes. I do it all, mayne. Holla at me!

According to your Instagram, you worked on a collaborative mural with artist Samo on a mural dedicated to Riley Gale that proudly sits on The Nines building in Deep Ellum. What is your connection with Riley, Deep Ellum, and/or East Dallas?
First off, rest in fucking power, Riley Gale. I met Riley in the early 2000s when we were both teens. He was a pillar in our friend group way before Power Trip was even a thought. There was just something about that fool that was calming and made you feel included. I spent a lot of time with him around Deep Ellum and the east side, doing lots of partying and wild stuff that I probably shouldn’t mention on record. That fool is my brother and we’re all hurting down here without him.

Deep Ellum, man, that was like a mecca for fools like me growing up. That’s where all the graffiti and fun was. If you wanted to be seen as a writer, you caught tags off Elm Street or you bombed the ends of the Good Latimer tunnel — rest in peace. We used to get wasted off of 40 oz brews and Xanax and we would sleep on the roof of Red Blood Club in high school. I come from that walk of life. Deep Ellum was everything to me for a long time. I hadn’t been there in a few years though and honestly, it’s pretty sad to see what it has become. 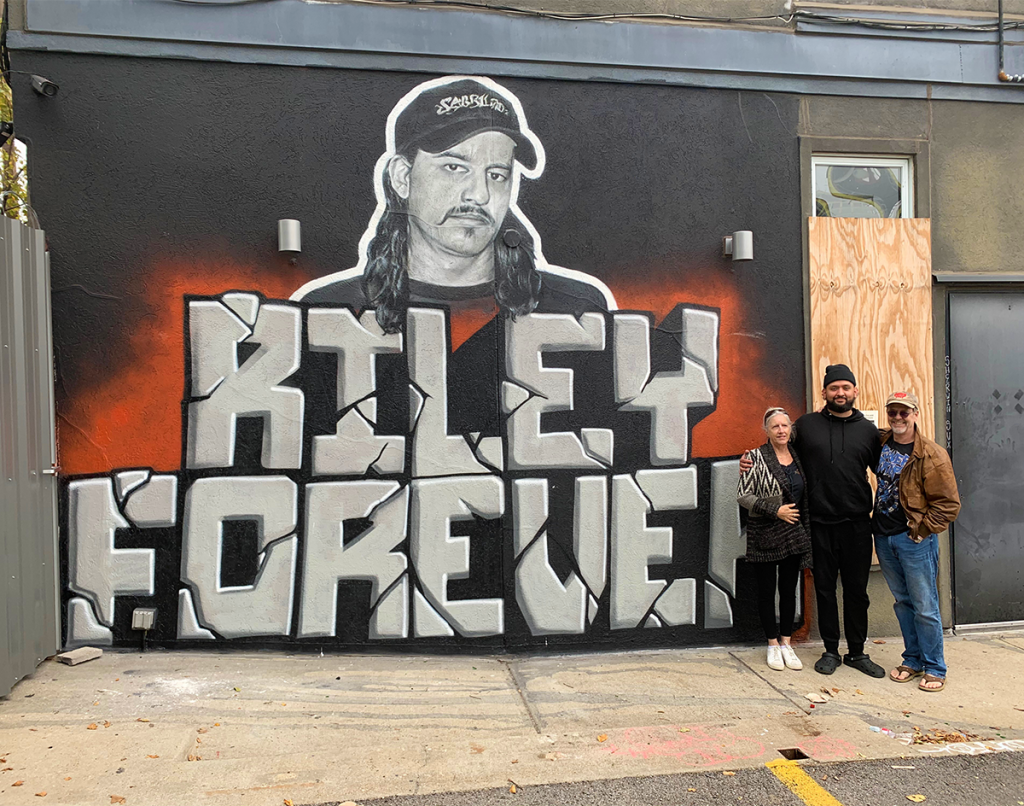 Riley was a very special person to a lot of people in the local and global community, in or out of music. According to some, he was almost “too good” of a friend, whether it was just being there for you at your lowest or offering advice. Do you have any moments like that?
I can’t say enough good things about Riley and not just because he’s gone. Even when he was still here, it was no secret how much we cared for each other. Riley was the best at a lot of things. He was a phenomenal writer and one of the smartest dudes I’ve ever met — name a topic and he could talk to you about it for hours. But above all, he was the sickest friend.

And yeah, sometimes he was “too good of a friend” for sure. Riley was the type of guy that could come home from a two-month-long international tour and on his way home from the airport, he would stop and have a meal with you or pop by and say hello. He always made time. He also had this wild memory. You wouldn’t see him for a while and he’d still remember your mom’s name or your girlfriend’s favorite show. He was just a good dude like that.

I had issues with drug addiction for a long time and when I finally got clean, I would have seizures and shit. I lived a few blocks away from and Riley and Hood. I love you, Hood. [They] would make me come over and chill every day. At the time, Riley was working a day job and writing an album and yet he still found the time to babysit me through my withdrawals. I honestly don’t know if I’d still be here if it wasn’t for Riley, Hood and Larry Clack.

Riley also, like, over-supported me, too. I feel like I could defecate on a piece of paper and he would find some way to tell me that I did it better than anyone else and offer me a gig or something and you could tell he really meant it. I miss that fool something vicious. If he can see us from wherever he is, I bet he’s all stoked that I was involved with that mural for him.

At one point, you toured internationally with artists like Ghostemane as a bodyguard. How was that experience?
I’ve been a bodyguard — “security” sounds like being a cop — on several tours with Ghostemane, both U.S. and internationally. Honestly, it’s the coolest shit ever. I was an outcast as a kid so I never felt like I belonged. The people I tour with cater to that exact demographic. So, it’s pretty tight that we pull up and create an atmosphere where these kids can just come and get lost in being themselves for a few hours no holds barred. It’ll be the wildest shit you’ve ever seen in a venue — I watched a kid lose a finger once. Most of our shows are all ages, because we do it for the kids.

The team that I tour with consists of top-notch dudes all around. Everyone is a master of their craft and we give 110 percent every single night. Half of them — there’s 12 of us total — are fools that I grew up with like Hood and Sherwin, so there’s already that brotherly vibe. We literally just be vibin’.

Also, I’d like to say that Eric (Ghostemane) is a genius and more than just my employer. He’s my brother and I don’t use that word lightly. My dad died while I was on tour and Eric offered to cover the funeral expenses and send me to counseling — shit like that, real brother shit. If you ever have a problem with him, be prepared to see me.

But yeah man, if you ever find yourself in a position to tour – do it. Don’t get all Hollywood and shit, just go along for the ride and try to make one person’s day, every day. You’ll never regret it. 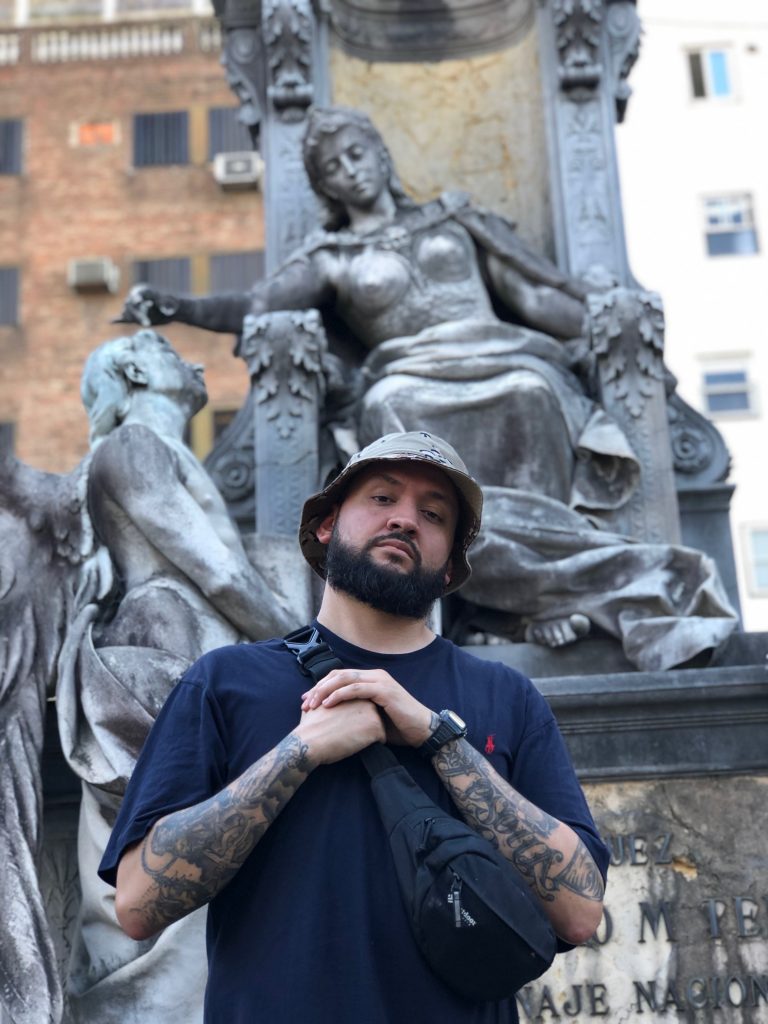 When you think back to when you were a kid, did you ever picture your life like this?
Man, fuck no! Not at all. I was a pretty smart kid, but boy was I necio. I got involved in drugs and gang banging at an early age. I idolized street and prison shit. I, for real, used to talk about how I was probably going to die young or do life in prison.

People would talk about what they wanted to do when they get old and I’d say “foo’ I’ll be gone by then.” I’ve been in the gutter before, so if one day you would have told me “hey man, you’re going to see every corner of the world just off of being yourself,” I would have never believed you.

Graffiti has taken me so far in life and it’s crazy to sit back and realize that. Every door that has ever opened for me was because of my talents or because of my spirit. Now I’m back into tattooing and that’s opening even more doors for me. I’m just in awe. But it’s like I always say – regular stuff is for regular people. When it comes to me and the people I choose to surround myself with, ain’t none of us regular. Not a single one of us. We all excel at something and I say that with humility. It just is what it is.

What motivates you every day to keep fucking going?
My mom’s prayers and my son’s hugs. Every friend or loved one that isn’t here to ball out anymore – I ball for them. Every friend that has ever given me words of encouragement or given me a hug when I was down. I feel like if I don’t push myself then I’m doing y’all dirty because you believed in me. And that’s not who I am. I do right by me and mine.

I also like to show my people that are still in the hood or in the game everything I do and let them know there’s no secrets or magic to this shit. Anything I’m doing, you can do, too. Just push yourself and be a solid motherfucker and the game is bound to bless you.

Pretend that you pick up the phone and it’s like the Walmart intercom thing, but you can say whatever you want and everyone around the world will hear your voice for just one moment. What would you say?
“Peace and love.” My dad ended every phone call like that instead of saying bye. I often try to understand this thing we call life and all I can come up with is that it’s all about peace and love, man. Have mercy on people. Be kind. Everyone on this planet is just trying their best. Be a good friend, be good to yourself and check up on your parents. Also, Sherwin sucks dicks!

And if I could kick some shout outs, I would say rest in peace to my Dad, Riley, Wade, Gloom, Tim Butcher and Chalo Gang! Pasta World ‘til I go!

Shout out to my mom and my sister, my girl and my son — Papi loves you. Shout out to my whole family and all my crews that I can’t really name for legal reasons. Shout out to my shop Ikonik Ink and my mentor Sal. Thank you and I love you to anyone that’s ever held me down. We just getting started, mane.