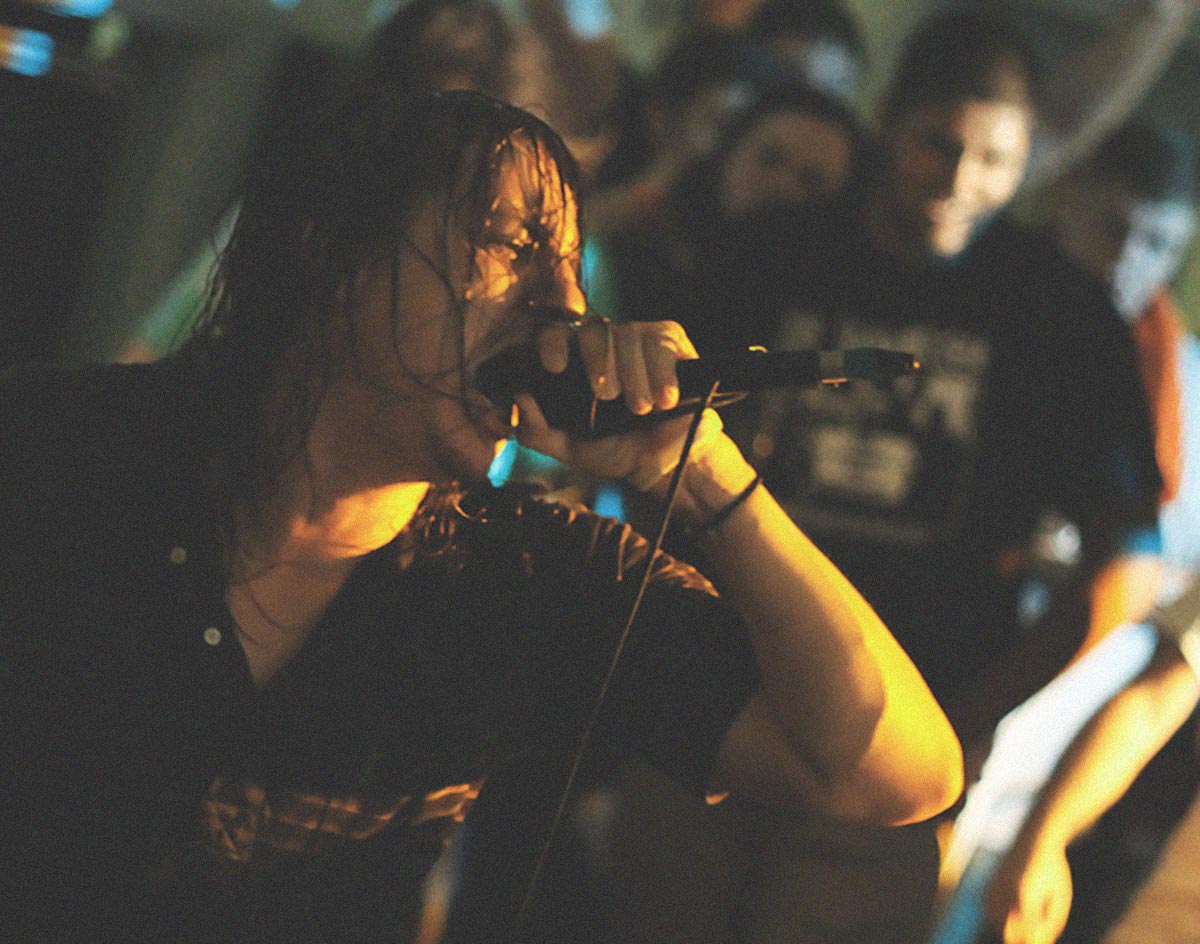 It’s been over a year now since Power Trip frontman Riley Gale tragically passed, and many of us — both here in Dallas and across the greater hardcore community at large — are still reeling from that horrific loss.

That’s to be expected.

Riley was way more than the frontman of a popular local band. He was a man who embraced open communication in a time when most of us shut our minds off to people who think differently than we do. He stood up for people who were disenfranchised, abandoned and/or unloved. He lifted up everyone around him.

Last month, on the one-year anniversary of his passing, Riley’s family launched a new initiative called the Riley Gale Foundation to keep his legacy alive. There’s already a Deep Ellum mural in his honor, a Dallas Hope Charities library that bears his name and even an LGBTQ+ youth transitional home named for him, but the new foundation is a major step forward in preserving even more of what Riley stood for.

In the wake of an August fundraiser hosted to help get the foundation rolling, we spoke with Riley’s brother Zach Gale about how the foundation came together, what his family hopes to do with it and why they believe it’s important to keep fighting on behalf of Riley’s beliefs.

Let’s start at the top. What is the primary mission statement of the Riley Gale Foundation?
The whole mission of the foundation is we want to continue supporting the causes that Riley cared about. That’s it. Straightforward, but we want to do it in a way that Riley would be proud of.

The three areas that we’re focusing on are the LGBTQ community, animal welfare and mental health. Those three areas were really important to Riley, ones that he always talked about. We’re trying to focus on the local aspect of it, too. So, those three areas — but in Dallas.

Before Riley passed away, he had partnered with Dallas Hope Charities. It’s a wonderful organization that helps LGBTQ youth in the Dallas area transition into independent living. Dallas has one of the highest homeless rates for LGBTQ youth. What Dallas Hope Charities does is they take those kids that have been kicked out of their home for being who they are, and helps them work their way into being an independent individual that has sound financial planning. They know how to budget and save, they have the job interview skills and they give them a safe place to learn all that. It’s people [aged] 18-26. Dallas Hope Charities has a home that they live at for 12 to 18 months, to help them get on their feet.

So that’s the big one that we’re focusing on. When we founded the Riley Gale Foundation, we knew the other two aspects — animal welfare and mental health — were important areas that we’re gonna work on. We just haven’t figured out how to do it in a local way just yet.

I saw Power Trip five or six times in a short span of time, and at almost every show between songs, Riley would talk about the ideal of having people from different walks of life coming together. He didn’t sound unrealistic, either. The way he spoke about it, you believed it.
Riley absolutely walked the walk. If he said something onstage, he meant it wholeheartedly. He was always an individual that it didn’t matter how big of a fan or how huge the show or how small the show was, he would make time to talk to the people there.

What was really great about him was he could talk to someone after a show who decided to share with him about a project they were working on, then he’d leave, come back a year or a year-and-a-half later, see them again and then ask them how that project turned out for them. He had an uncanny ability to connect with people and remember the things they connected about. It’s easy for a touring musician to talk to a fan and then forget who they are as soon as you walk away, but Riley never did. He remembered everything about everyone. That’s why his connection with people was so genuine because he was truly interested in what they had to say.

I have to admit that I didn’t know him very well. I would run into him in random places — like just walking down Commerce Street or at Torchy’s Tacos. The last conversation I had with him was a few years ago. Power Trip had just signed with Southern Lord, and he wanted to send me an advance copy of their record. Of course, he never did, but I never held that against him. He might have not remembered your name, but he knew who you were.
[Laughs.] He did everything he could. I’m sure he wanted to send you the record and forgot. That was not uncommon!

Oh, absolutely. I guess my point is that there was a sincerity to him that you don’t often find in punk, hardcore or metal. I’ve obviously met a lot of sincere people that play those styles of music, but Riley was a different kind of sincere person.
He tried to make time for whoever he could. There’s a great interview he did with the YouTuber Little Punk People. Riley was thrilled to do that interview with that kid because what he saw was this young kid trying so hard to get involved in the music industry in a really unique way. Riley wanted to support that. No one else [in Power Trip] wanted to do the interview, but Riley was like, “Hell yeah I’ll do that interview!”

Riley might be gone in the physical sense, but I would not be surprised if in 5 to 15 years, you will see young bands that were inspired by Riley and want to do what he did. Have you come across any bands that have taken up that idea yet?
Not directly just yet. Hood — the band’s art and creative manager — and Riley always talked about how cool it would be if they played a concert and they inspired a couple of kids who just met there to go out and start their own band, and then one day Power Trip toured with them. It’s something he talked about a lot, and he really wanted to see happen. [Editor’s note: Turns out, this actually happened. Dallas’ Creeping Death, which was launched after being inspired by a Power Trip show, toured with the band just prior to the coronavirus shutdowns.]

Back to the foundation: It really sounds like a long-term project.
Oh yeah. There is no plan on stopping it. The way it came about was, in the days after Riley passed, we tried to figure out what we’re gonna do with his estate. Our parents sat our siblings and I down, and they wanted to give Riley’s royalties to us three. I looked at Dylan and Sarah, and there was this unspoken agreement where we said “We don’t want it. That’s his money. Let’s do something better with it.” Then that’s where the idea of a nonprofit came about. All of Riley’s future earnings go straight into the nonprofit, which is going to allow us — on top of fundraising efforts — to continue to do some really cool stuff.

Off the top of your head, what are some of the most positive memories you have of Riley as a brother and as a performer?
Oh god, you’re putting me on the spot! [Laughs.] They’re related a little bit. As kids, Riley and I had different interests. Riley was always into music and creativity and artistic stuff. I was way more sports-focused. Then Riley got into music and, specifically, growing the local Dallas hardcore scene in his teenage and college years. Then, when I hit high school, I was a little bit lost in who I was. Riley was there to not tell me, but just invite me to go to shows with him. That was probably one of my most fond memories of Riley — him bringing me into his world with his friends and making me feel comfortable and welcomed, but then involving me in his musical career.

He had a band before Power Trip [called Balls Out] that I used to drag my friends to their shows. They were playing at Across the Street Bar when it still existed, and there was no A/C and everyone’s sweating their ass off. [Laughs.] The energy he brought — even to these 20-person shows that were just his group of friends and a couple of my friends — was there from day one.

To see him grow into this incredible performer [was] not shocking. He always had it. He always knew how to bring that level of energy and banter to the stage.

I have been thinking a lot lately about hardcore’s evolution. You have these old hardcore dudes that I will not name who post pixilated memes on their Instagram and talk all the time about how something they did in the 1980s was the greatest thing that ever happened. They’re set in their ways, and they don’t want to open their minds to new things. Power Trip, and Riley in particular, have always been the antithesis of that. The fact that Riley was friends with a Fox News host who obviously held opposing views to him says so much about his character. Riley was really attuned to what people were really going through, and opened his mind up to it. That’s going to continue the story of hardcore, I think. Riley and his music will continue to have a major impact on people — including kids just now hearing of Power Trip.
That’s what we’re hoping. That’s what we would love. A great example you brought up: Riley’s relationship with Greg Gutfeld was… I mean, they could not be more diametrically opposed on a lot of issues. But Riley was always willing to have that conversation because he knew that society cannot improve without talking about the things that are hard to talk about, that a lot of people don’t want to talk about. They want to have their opinion, and not listen to anyone else’s. Riley was always there to listen, and ask questions that might make them reconsider their position. He and Gutfeld used to have two-hour long conversations — not coming to any kind of conclusion or agreement in the end — but they had the conversation. And that’s important.

Learn more about and donate to the Riley Gale Foundation here. Cover photo by Pete Freedman