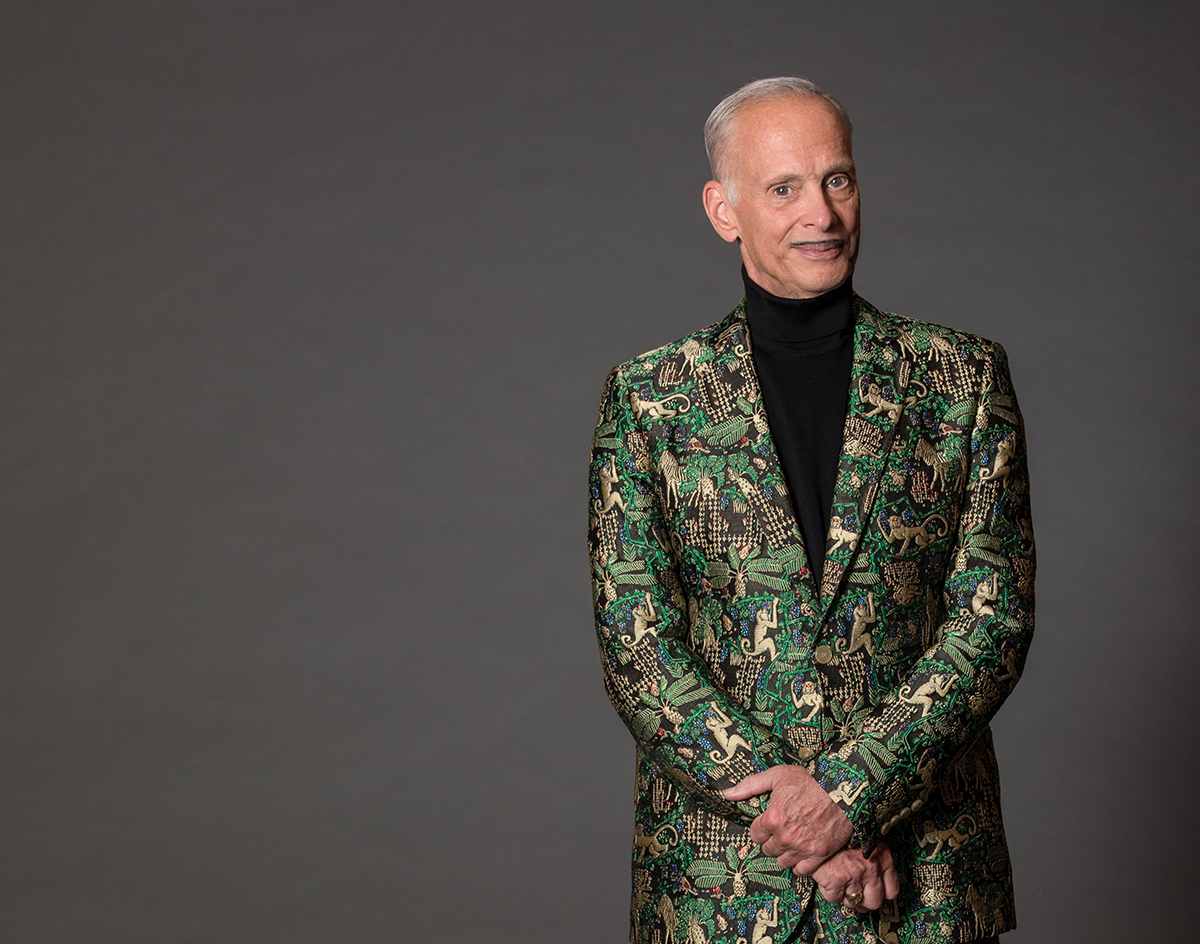 The Cult Filmmaker Behind Films Like Pink Flamingos And Hairspray Is Adding Dallas To The Naughty List For His “Filthier & Merrier” Show At The Kessler.

For half a century, John Waters has been a cult hero by directing films that gleefully and grotesquely skewer middle-American norms.

Outrageous sights like Divine eating dog shit in Pink Flamingos and sexual assault via a giant lobster in Multiple Maniacs have been etched into the memories of generations of adventurous film lovers.

Waters’ last directorial effort was in 2004, but he’s kept himself quite busy since then, from writing memoirs like last year’s “Mr. Know It All” to making cheeky cameos in films as disparate as Hairspray (a musical based off his original 1988 film) and Alvin and the Chipmunks: The Road Chip (Alvin tells Waters “Don’t you judge me, I’ve seen Pink Flamingos!”)

Still, one of Waters’ funniest and most successful extracurricular ventures is his annual Christmas one-man shows, where he applies his profane wit towards the saccharine sentiment of the holidays. He brought the performance to The Kessler Theater in 2016, and this year he’s returning for “A John Waters Christmas – Filthier & Merrier.”

Among the topics he’ll tackle in this year’s show include: Is Santa a silver fox, “bear” or a “gainer?” Can you have Christmas sex inside a chimney? Are the reindeer even paid minimum wage?

In advance of his return to The Kessler theater on December 14, we chatted with Waters over the phone about what he’s got in store for Dallas this year, his favorite and least favorite Christmas music, his thoughts on fans bringing their children to his performances  and that one Christmas when he was gifted a butt plug in the shape of baby Jesus.

This is gonna be your second Christmas show at the Kessler, what’s new this go-around?
Oh, it’s completely new. I always write all new stuff for it because sometimes I go to cities every year so I always try to give the audience new material. I’m almost finished writing it, I’ve been working on it every day, and I gotta learn it, that’s the scary part. But I’m fine, I’m on schedule, I think.

It’s interesting that you do a Christmas show, because I often associate such a show with just Hallmark movie sentimentality, but this is just so far from that.
It is, but it might not be able to exist without that sentimentality that I’m making fun of and doing my own version of. Because I think I do like Christmas, but I understand that some people hate it, so I do have something for everybody. You can’t avoid it, it’s like a meteorite thrown at you from capitalist Hell, even if you love it.

It’s almost like a necessary evil or something.
Well, I don’t know that it’s evil. I had a functional Christmas when I was young, I don’t remember anything negative, and I still like Christmas. Now I feel like a drag queen at Halloween — if it’s Christmas, I’m workin’. I get home right before Christmas and have this huge party right after I’ve been to, I don’t know, sixteen cities this year, which is fairly exhausting, so I walk in the door thinking “Oh God, now I have to do Christmas for real!”

In “Crackpot” you described Christmas Day as an “orgasm that never stops.”
Well, maybe I was younger! It is [an orgasm] when you’re a child. I mean, you don’t put it in orgiastic terms but it is something that you’re supposed to feel so happy you explode, so it puts this great burden on people to live up to what it’s supposed to be.

Do you feel the pressure to make it what it “should” be — that classic Christmas?
I only feel that pressure when my audience comes to pay to see me do the Christmas show. At home, well, I go to a lot of trouble to get personal presents. Every three years, it’s my turn in my family to cook the family Thanksgiving dinner, so I have a huge party [and] I have to buy about 150 presents. So yeah, it is something that steamrolls its way into my life, but I start thinking about it in the summer. I send a Christmas card every year to people I really know well and I have to think it up every year because I make it myself, I print it — so that’s around July when the people that are working for me start saying “Alright, what is it, we gotta get those things made!” It begins in July for me.

The presents are a whole other thing, I was thinking about stocking stuffers. I feel like poppers make a good stocking stuffer.
They do! I remember when I was young, some parents would only give their children sensible things like deodorant and apples and all things that were sundry. I don’t think you should get sundries of any kind in your stocking, I think you should get things that are bad for you: porn, poppers, candy, I don’t know, needles! I don’t know, not needles. But candy cigarettes, they shock me they still make them. What parent would buy their children candy cigarettes?

Maybe they have candy vapes now!
I don’t know, I haven’t seen them. Little baby vapes for kids, that’s a good idea!

In the show, what’s cool is that you kind of celebrate things that people usually think are the pains of Christmas, like the work of doing the cards and all that. What’s something that everyone is supposed to love about Christmas that you personally can’t stand?
I guess watching sports right in the middle of it. It seems like whenever I go to events, some game comes on late in the middle of it to dominate your Christmas. That, maybe. But I’m different now, maybe I like sports because [of a] Nike ad, I don’t know if you’ve seen it, so now I’m a sports fan.

Just jumping into the middle of a game is like watching a movie halfway through, anyway.
Well, I don’t mind, except when I say to them “How long is this, how much left?” and they say 20 minutes, but 20 minutes means 5 hours because every second they stop the clock. So that’s the only thing I have trouble with, judging when it’s over.

You put a lot of thought into weird, filthy Christmas songs. What’s the worst Christmas song of all time, one that you can’t even appreciate?
Well, I think it’s worst and best of barking dogs singing “Jingle Bells,” it’s truly nerve-wracking. And I really hate the Little “Bummer” Boy himself, that “pa-rum-pum-pum-pum” makes me crazy! I’ve heard it so many times I could projectile vomit.

That one is… not great. What do you think about “All I Want For Christmas Is You?” That feels like the only Christmas standard within the past 20 years.
Well, they just rewrote “Baby It’s Cold Outside” to make it politically correct. I like the jazz ones and I like the novelty ones and I have a whole Christmas playlist that I use at my party, it’s 350 Christmas songs that I actually do like.

That one had the Chipmunks on it, right?
Well, I still have the whole Chipmunks Christmas album, of course. I was in the last Chipmunks movie so children come over to me in airports, which is alarming. I just say to them “Have you ever seen the dead?” I like children and they like me, that doesn’t freak ‘em out, but it does stop them in their tracks for a minute.

They’re like “Oh, it’s the guy from the ‘Squeakquel,’ I love that movie!”

They recognize me from the Chipette album, or “The Simpsons” sometimes.

Oh yeah, that’s an amazing episode!
Or the Chucky movie, [but] I only get recognized in the subways for that. Always when I’m on the subway, people recognize me for being in the Chucky movie. I had a great time being in that. I wanted to be in that. I lobbied to be in it. The only thing I wanna be in now is Final Destination, the next one. I was almost in the last one but they couldn’t work out the scheduling, so that’s my last bucket list.

How would you wanna die in one of those?
Well, that would be up to the good screenwriter. The Writer’s Guild is on strike so I can’t say that now for fear of being cut.

Do you think there’s still a chance of that project ever happening?
I doubt it. It’s gone through many stages of “almost” happening. Things in Hollywood tend to happen right away or never.

I found out a stat recently that was pretty bonkers. Every year, ER rooms put out this list of things removed from peoples’ rectums and candy canes, for some reason, are always on the list.
Well, that seems that would be — I guess maybe they think it’s like a sex toy because it probably wouldn’t be that hard to insert and it has that curve on it that some sex toys have. I get Adult Video News, which is the trade magazine for the porn business, and there’s sex toys in there that — what is that? You know, things that I don’t really know what you’d do with them. So to me, a candy cane seems mild compared to the sex toys I’ve seen. The worst is one year, someone gave me a baby Jesus butt plug and I threw it out ‘cause even though I’m not… I am sacrilegious, I felt that was a bit… that was asking for trouble!

That crossed a line even for you?
Well, it didn’t cross a line, but it just seemed like… you know what, I don’t know. They have a Mary one too. I didn’t need it to be in my drawer, let’s put it that way.

Have you ever gotten any pushback from more religious people from the things you’ve said?
They don’t come to see a show called “This Filthy Christmas.” All they have to do is Google me for one second and I think that they would know it would be kind of not up their alley.

Yeah, I don’t think anybody from Focus on the Family is coming over.
No, I’ve never had — I’ve had few walkouts. Sometimes people bring children and I think “What are you thinking about? Why would you bring an eight year old to my show?” And you know, I think they told them “maybe this isn’t a good idea.”

‘Oh, it’s the Hairspray guy, check it out, kid!’
Yeah, but if they read anything about it, “it’ll stuff your turkey” — does that really make you want to bring your kid?

Who gives better head, Mrs. Claus or Krampus?
Well, I would think it would be Prancer the reindeer, that sounds like the gay one to me. Prancer, that’s even a gay word! “Who’s that prancer prancing around?” That was like an anti-gay thing people would say. I’m pretty sure Prancer is the gay reindeer.