[Q&A] Emilio Vazquez Reyes & The Next Generation Of Storytellers. 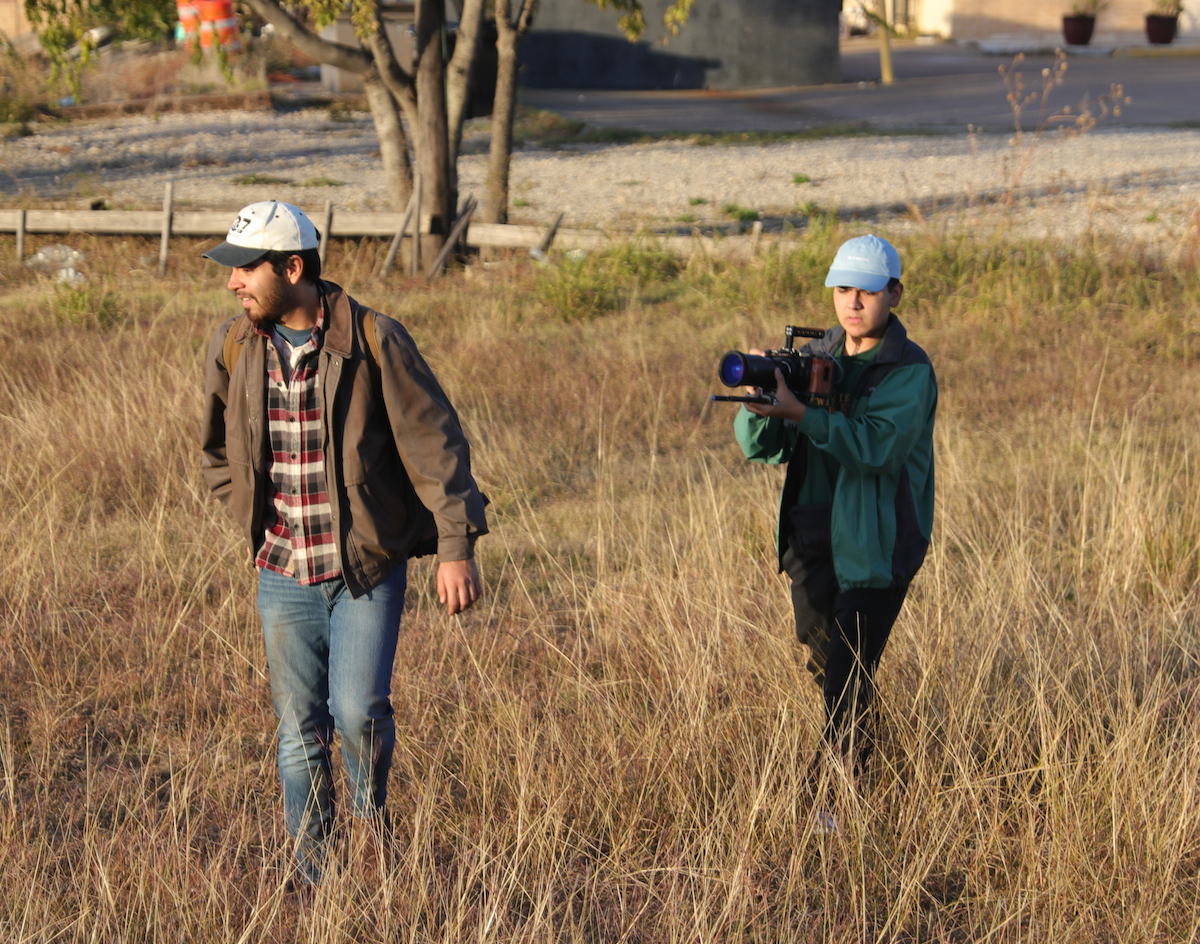 South By Southwest’s film festival has a knack for getting people excited about making movies, especially after a two-year break from in-person attendance.

Being the state’s largest arts festival, it serves as a special spotlight for North Texas talent. The honor to win, or even just be featured, grows tenfold for adolescent creatives, who’s hopeful careers receive a substantial boost from taking part in it.

Frisco’s Emilio Vazquez Reyes, 16, collected a Grand Jury Award for Texas High School Short for his three-minute film, Honeybee. It follows an undocumented immigrant who receives a bittersweet phone call from his daughter across the border. In his directors statement, Reyes dedicates the film “to the many Hispanic immigrants, whether they’re undocumented or not, who have to constantly endure the brutality of racism and prejudice that scar this nation.”

This accolade is nothing to sneeze at, especially considering this is the young filmmaker’s directorial debut. With a lifelong interest in film, Reyes has been toying around with his BlackMagic camera since purchasing it last summer, shooting vignettes everywhere he went. Honeybee was his first official go at a feature, and it was awarded at one of the country’s biggest film festivals — SXSW judges calling it a “beautifully-written, thoughtfully-crafted film.”

“We felt this film was a graceful way to tell a difficult story,” judges say on the list of the film festival winners. “Using all of the important elements like cinematography, music and editing to both advance the story and sincerely engage with the audience.” The film is not yet widely available, as it still has festival rounds to make, but Reyes says it should be available online early this summer.

Fresh off his win, we gave director a call (on a weekend, of course — he’s got school) to chat about the short film, the SXSW experience and why it’s so important for young persons to pursue their passions.

Tell us a little bit about your journey as a filmmaker.

I’ve always been interested in film ever since I was a little kid. I mean, I already am a little kid, [Laughs] but when I was even littler. I always wanted to be an animator because I kind of grew up in that “Cartoon Network Renaissance,” as they call it, growing up with all these amazing shows, so I’ve always liked that kind of artistic storytelling.

When I started becoming a preteen, that’s when I started getting into more live action movies. And, of course, YouTube really helped with that. I just had so much access to all these amazing short films and tutorial videos on YouTube. Everything that I’ve been pursuing in film has been entirely self-taught through the internet.

Maybe four years ago, I got into screenwriting. And as the years went on, I started to go more into realistic stories. At the very beginning, I was writing scripts about  history, like World War II  and life in the ’70s. But obviously, I had no experiences in that since I’m a 16 year old, so recently, I’ve been writing more personal stories and putting myself into these different characters and whatnot. I’d say as the years went on, I progressed and “matured” more into my tastes.

What filmmakers inspire you?

There’s a ton. I would say Kiarostami. He made Taste of Cherry and all these minimalist films that really inspired my storytelling in terms of just telling a simple story, nothing too extravagant, but something that’ll still emotionally connect with the audience. Noah Baumbach and Richard Linklater, both of which are very character-focused, have tons of dialogue and very realistic and relatable. I kind of want to move more towards that into my movies — making really realistic simple dialogue, character-heavy plots.

Do you have inspiration that lie outside of film? You mentioned you’re really into history and that drove your screenwriting for a while. Anything else that steers you when you’re coming up with stories?

I’m really into music, arts and architecture, and very specific things like urban planning. You can draw so much inspiration from very niche topics and just implement them into your script to give it more authenticity. And I’d say that analyzing things like art history, avant-garde things — it can really give you a lot of perspectives on things.

How long did it take to make Honeybee?

The weird thing about Honeybee is that I was preparing to make another film that was like, 20 pages. I was like, ‘Okay, I need to make something because I’m so tired of just making camera tests all the time.’ Before making that 20 page script, I wanted to make a little micro short just to test my storytelling capabilities. And, coincidentally, my video broadcasting teacher recommended me to make a three-minute short for this competition in Long Beach.

I spent around two weeks just preparing to make Honeybee. I’ve always had the idea in my head about a story of an immigrant from Mexico, traveling to the United States and having a daughter that he talks to. So I thought, well, I could just make that into a three-minute little snippet. So I’ve been preparing that for two weeks. And then we shot it over the course of a weekend. And I spent the last week of November editing and finalizing it for the deadline. We ran into some issues during production, but luckily, we were able to get it done in a timely manner.

What were some of the issues?

We rented this lens … and because I was at school and no one was home to sign for it … they brought it back to the delivery station. We drove for like three different stations — none of them had it. And that was the day before I had called everyone over to begin shooting. On Friday, I was in the middle of class and I got a text from the delivery service saying that this lens was delayed until Monday. If that would have happened, we wouldn’t have a lens to shoot the movie with over the weekend, and everyone called off work and all that. So I was really, really close to canceling the entire movie and not making it at all. But luckily my parents were able to pick it up.

Was SXSW your first time at a film festival? What kind of experience did you gain from that?

Oh yeah, that was my first film festival that I’ve ever been to in my life. To go to one of the largest in the country, it was such an amazing experience. I’ve definitely learned a lot about how the process goes, like, waiting in lines. [Laughs] Obviously, that was a pretty rough lesson. And, you know, coordinating properly, because when you’re there, there’s just so much going on that you have to plan properly. I just learned a lot about how to navigate festivals and all that.

How did it feel when they announced your win?

It was very — I don’t want to say surreal — but I wasn’t expecting it at all. I really thought that they would give it to someone else, mainly because when we showed the premiere, I was so proud of these other filmmakers. And while I was watching the movies, I already kind of internalized in my head that, ‘okay, they’re going to give to someone else’ because all these filmmakers in the competition are so talented and so amazing. I really thought that they’re gonna give it to [one of] them.

And I remember the week before we left for South By, I spent like a whole week looking for a suit for the award ceremony. We found one and then I was like, I’m not going to wear it because there’s no way I’m gonna win. So I went in sweatpants and all that.

You accepted your award in sweatpants?

Pretty much, yeah. [Laughs.] I went up there and I had a very suspiciously chilled-out demeanor. Mainly because it hadn’t hit me yet that I won in one of the largest film festivals in the country.

When I got up there, it felt natural to talk in front of that audience. I’m a part of an orchestra in my school, so I’m used to being on stage, having all these lights shine at me and having to speak in front of people. At the moment, it felt normal to me, even though I felt really, really grateful and really honored to be up there.

As a young person who’s a filmmaker, why is it important for young people to get the chance to go to these kinds of festivals?

Well, we’re the next generation of filmmakers. And I feel like film has shifted incredibly over the course of the past decade. We have the cinema masters, like Paul Thomas Anderson, Tarantino and Scorsese, and they got their start by doing the same thing that we’re doing right now. We’re experimenting with the medium, we’re trying new things, we’re trying to “rebel” from filmmaking norms.

Especially now with the age of YouTube and the internet. You can just go on the internet and rent something really nice for really cheap. And when you give kids my age, that opportunity to express themselves with industry-grade equipment, it really allows for new stories to be told because my generation — we’re experiencing a lot of things that are very new to older generations. By letting a younger voice express those new things that we’re experiencing to the world, it really allows for a new perspective for everyone.

What’s your elevator pitch for Honeybee? What makes it worth seeing?

The reason why I wrote it is because my parents. They’re immigrants from Mexico, and that idea of someone leaving behind their country, their life [for] a chance of succeeding in the United States, I feel like a lot of people really need to see what their life is. I wasn’t there to argue the politics of immigration, I just made it to say that this is something that’s happening. It’s pretty much to raise awareness about violence towards them.