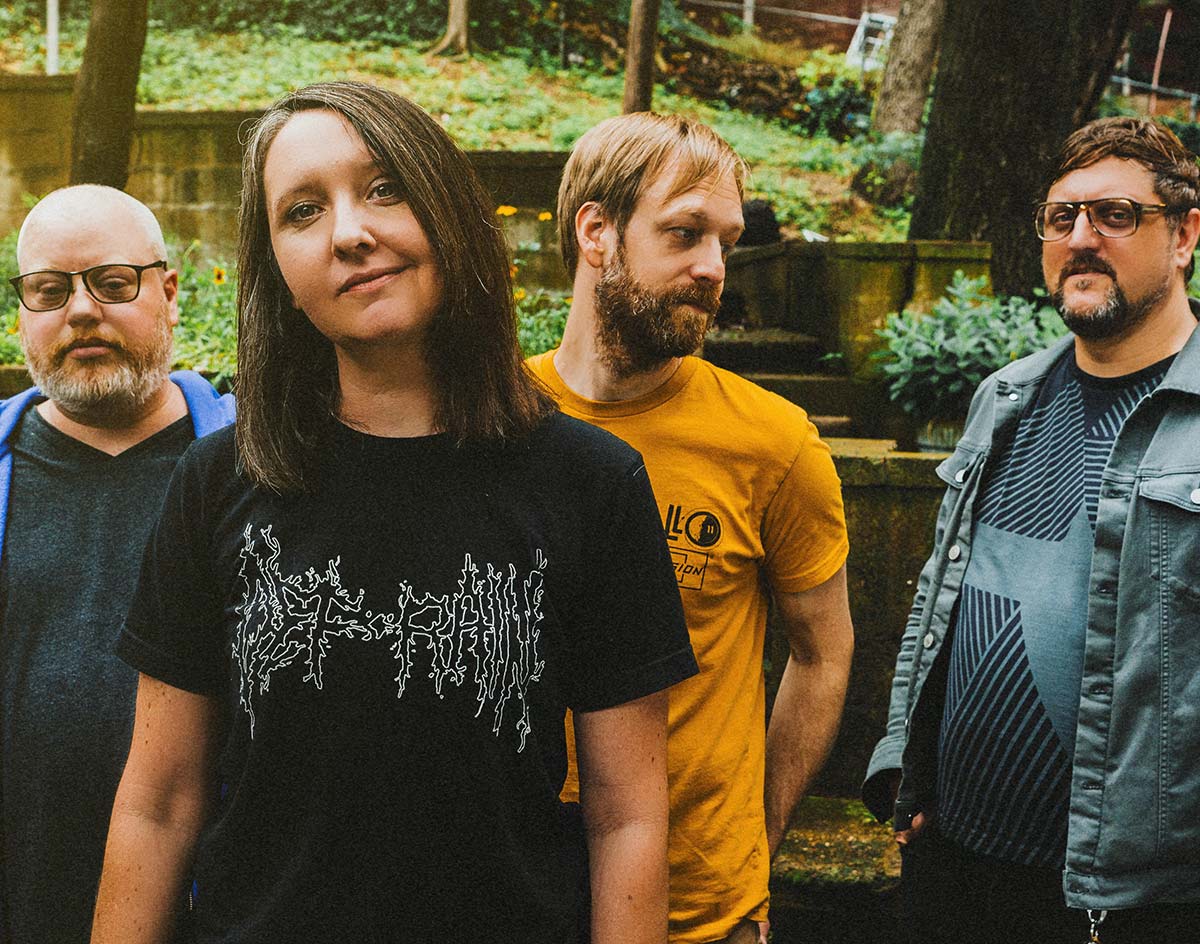 Abbreviations may be a brand new band, but if you’ve been around the North Texas music scene for the past 15 or so years, you’ll recognize at least a couple of its members.

Frontwoman and guitarist Ashley Leer, for instance, is a fixture in the community thanks to her work with the raw and angular Record Hop as well as her dreamy pop project Def Rain. Drummer Tony Wann, meanwhile, too played in Record Hop, as well as Red Animal War and the Numbers Twist. Rounding out the band is Leer’s husband Matt Leer (Diamond Age) on guitar, and Chad Walls (Lo-Fi Chorus) on bass.

Just earlier today through mxdwn, the band premiered its debut “Turn On You” single for McKinney’s Red Zeppelin Records, and we wanted to mark the occasion to catch up with Ashley, Matt and Tony to discuss their new band, how they came together, their sound and what’s coming down the pike next for the group.

Dallas music fans can next catch the band live when it plays the Double Wide on July 30 alongside its Red Zeppelin labelmates God Of Love and Bayleigh Cheek. As for what to expect? Well, hit play on the band’s debut single below, then keep reading to hear the band’s on thoughts on the matter.

How long was the stretch of time between you all thinking about forming the band and then actually working on the project?
Ashley Leer: I would say around a year or so. I had about five or six songs written before really thinking about starting a new project. At first, I thought maybe I could use these for Def Rain — but, as the songs started coming, it became more and more obvious that this needed a different platform.
Matt Leer: When we were recording Def Rain’s Exit, Ashley had started making a group of new tunes that were more guitar-driven, and I think we initially had discussed using a few of them for new Def Rain material — but it became pretty apparent as she kept writing that these were a bit of a different vibe to Def Rain. We discussed getting a band together and starting something new. Having recently worked with Tony on drum tracks for Def Rain, we thought, “Would Tony be into doing this?” I’ve also known Chad [Walls, bassist] for many years, and it was perfect timing when we saw he had posted something about getting a new bass rig and that he was looking to play bass! It all fell together organically.

I know some musicians were very productive writing material during the pandemic, but others that weren’t. How about Abbreviations? Where do you fall on that spectrum?
Ashley: It was pretty productive for me! We basically took off from practicing together for a year, but I was able to write a bunch. I’d say we’re close to having enough songs for another album.
Matt: I know Ashley has been super busy writing new material. However, our process as a band had been taking Ashley’s demos and working them out in the practice space. Sometimes they stay true to the demo, and sometimes we change them and add parts or change the dynamics or arrangement. All of this came to a screeching halt during the pandemic; I recorded an album under a different name while I was unemployed last summer, and we have traded Ashley’s demos of new material, which is well over another LP of material, so we have a lot of work to do!

Ashley, what’s it like playing with Tony again?
Ashley: It’s great! Other than just being incredibly talented, he’s also got great taste, which really comes in handy while we’re writing. He’s creative, he’s open to trying different things, he’s nice. Sometimes, I’m not good with words when it comes to writing and playing music, so at practice I just wave my hands around and make weird noises, and he understands what I’m saying. So that’s good! [Laughs.]

And, Tony, what’s it like playing with Ashley again?
Tony Wann: Obviously, it’s a joy to play again with Ashley. She’s an incredibly intuitive songwriter and performer, and her instincts are almost always spot-on. This time around, the ideas that she brings with her to practice are often almost fully developed, so it’s really just a matter of getting on her wavelength and playing what’s right for the song. I’ve played with her long enough now, and I’ve learned to trust what she’s putting out there. With our songwriting in the past, I probably insisted on exploring every possible avenue and felt like we could always make a song better by adding something here, tweaking a verse there, etc. With Ashley’s music, usually what’s great about the song is there from the jump, and the extraneous stuff just clutters the original idea. Of course, wherever there’s room for exploration or experimentation, she’s always more than happy to indulge it. And there can be some magic in there as well. It’s the best of both worlds.

Recording-wise, do you hope to release more new material later this year?
Ashley: This first record we have, titled ABBV, is scheduled to come out in the fall of this year. And hopefully, by then, we are almost ready to get back into the studio for a second one.
Matt: We recorded an LP plus a few other songs that we had pretty much completed at the beginning of 2020, and we hope to get working on the next album this summer/fall. [We’re] just getting back to where we were before the lost year!

Considering you only have one song out for people to hear, how would you describe the other material you have in the works?
Ashley: I would describe it as a blend of rock and pop. There are definitely loud, more aggressive parts — but there are also softer and more melodic vocal and guitar parts. To me, it’s kind of the perfect blend of Record Hop and Def Rain.
Tony: I’m really happy with how varied the dynamics are on the first batch of songs. I think all of us were comfortable with playing loud, but there was a real interest on some songs to really dial things way back. So, as it happens, the first song people are hearing is very much on the quiet side — but that’s certainly not the only gear we run in. Once I described one of our songs as “that reggae song” in practice, which, aside from being totally inaccurate, also really pissed Matt off — because he loves reggae. So, it’s definitely not reggae.

If you had your pick of any national touring band to open for, who would it be?
Ashley: Hmm, I don’t know. Deerhoof?
Tony: Blonde Redhead!
Matt: I’ve honestly never had the best “opening for my favorite national touring act” experiences in the past. We did try to get on the Tropical Fuck Storm bill at Three Links a while back, but it was already fully booked. That was an amazing show.

Individually, what did you learn about yourself during the pandemic?
Ashley: I learned that I’m kind of a routine gal! I created a schedule and stuck to it. Over and over and over again. It worked very well for me, and kept me motivated. I also lost my dad this year, which was the worst, but it turned out to also be very motivating. Turns out, there is nothing more motivating in life than death. That was pretty deep. Someone should write that down.
Matt: This was an extremely turbulent year, and Ashley’s father passing was an overload of emotions and introspection. The outside world seemed to spiral out of control for a while. I have learned that I cannot wear shoes/socks or pants for an entire week and not even think twice about it? Also, I learned how to make eggs benedict with hollandaise sauce. I didn’t handle the day-to-day as well as Ashley has.