Pedal To The Metal. 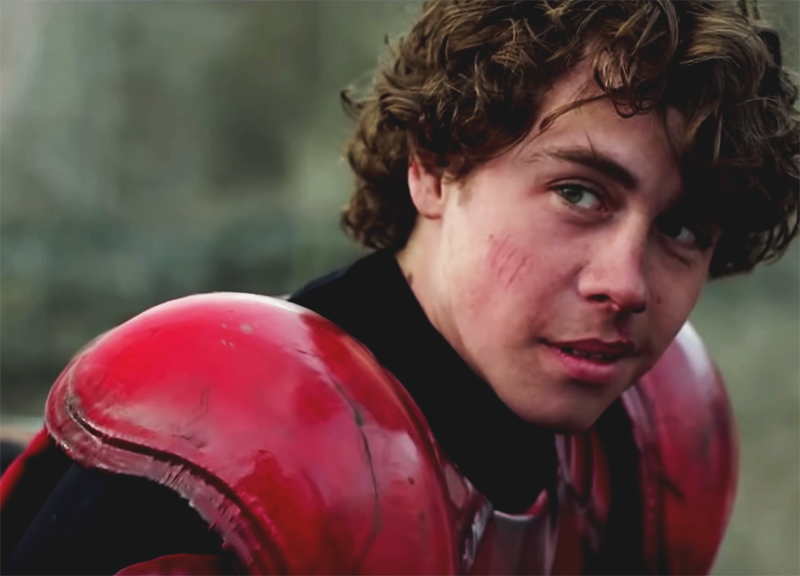 There's a small but awesome subgenre of movies that pay homage to the look of older movies.

My buddy calls them “modern retro” films, which I think sums it up pretty well. Most notable of these are the works of the Canadian film collective Astron 6, with its Manborg and The Editor films. Another effort that fits nicely into this model is director Jason Eisner's Hobo With a Shotgun.

Now, following in the footsteps of those films, we have directors Francois Simard, Anouk Whissell and Yoann-Kari Whisse, and Turbo Kid, their love letter to post-apocalyptic movies. Set in the distant future of 1997, Turbo Kid follows “The Kid,” a scavenger trying to survive in this toxic wasteland, and his fight against the local crime boss.

There's a very fine balance that these types of throwback movies need to strike between substance and style.

Listen: It's very easy to have cheesy dialogue and a pulsing synth score (which this movie does) for the sake of having it; but those elements are no good if they don't help the story. Thankfully, Turbo Kid pushes beyond that, taking cues from the past and using modern sensibilities to tell a fun and comically violent story.

First, the universe that's been established here is thorough and worth of further exploration. The sharp script hints at the culture that has developed since the apocalypse happened, but it never hits you in the face with it, and it's neat to see the brief scenes of the struggling civilization. There's a whole subculture in place in this wrold of bounty hunting, scavenging and arm wrestling for social status. Also, everyone has crazy, outlandish costumes.

But the best part? Everyone is rocking bicycles as their major mode of transportation. The movie doesn't treat this as a joke, either. As cool as Mad Max: The Road Warrior and Fury Road are, it really doesn't make sense that cars would be used in a post-apocalyptic world. Yeah, at first glance it can look goofy. But it also gives the world a stronger “survival of the fittest” aspect, since you have be strong enough to pedal quickly and get away from saw-wielding masked maniacs.

The cast is led by Munro Chambers as “The Kid,” a resourceful scavenger living out on his own who loses himself in his Walkman and the Turbo Man action figures and comics with which he's obsessed. Aaron Jeffrey plays a cowboy-esque badass who's the arm wrestling champion of the little town. Michael Ironside plays the main baddie, Zeus. Jeffrey and Ironside particularly chew the hell out of this scenery, and they really look like they're having a ton of fun as they do. But the true standout of the movie is Laurence Leboeuf as Apple, who decides that it's her lot in life to be The Kid's best friend. Her performance as the ever-curious and optimistic sidekick is something special, for sure. She brings a lot of heart and humor to the story.

If there's a knock here, it's that the story comes off as a bit too episodic; the parts that come between the action scenes always feel like mere setups for the next sequence. Would Turbo Kid work better as a six-episode miniseries? Maybe.

Another minor issue: There are some very advanced robotics and weapons in play here, when all the while this is supposed to be taking place 1997 and the apocalypse has supposedly been around for a number of years already.

But those are all mild critiques at best — because, honestly, when you're watching the movie, you're having too much fun to notice them much.

In all, Turbo Kidis a unique, incredibly fun throwback that's been made with a lot of heart.

There's nothing better than a passion project, folks. And this one clearly fits that bill.

An earlier version of this review originally appeared on WDYMS.