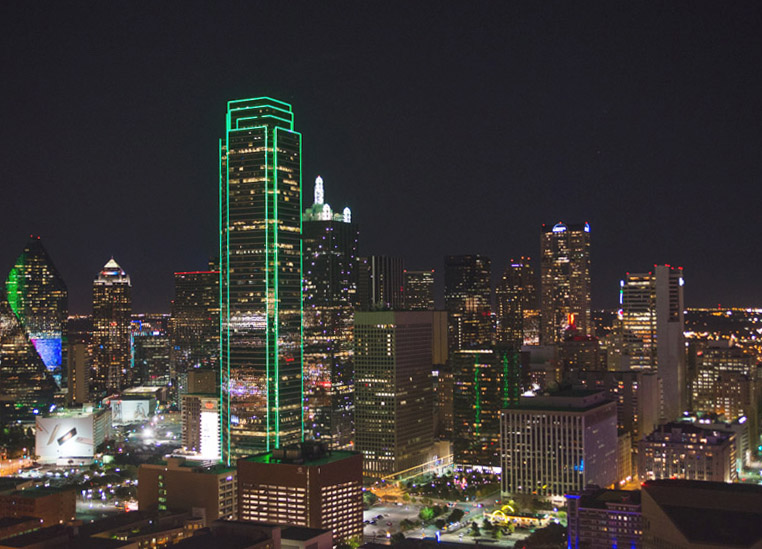 Dallas, I love you, but you’re bringing me down — with your lies.

Outside of its stereotypes, which absolutely do exist, the City of Dallas is actually a pretty great place to live, work and play.

But, the worst thing about Dallas — and the root of plenty of the city’s stereotypes — is that it tends to lie to itself because it, in some ways, has an inferiority complex when it comes to other major American cities.

Hey, anything to make ourselves seem cool or safe or remarkable or sane, right?

Not necessarily. Eventually, we have to wake up, smell the brisket and stop telling ourselves these lies. Here are the ones we recommend ditching first.

Dallas’ crime rate is going way down. Not so fast. Dallas Police chief David Brown recently trumpeted the fact that Dallas’ crime rate dropped for the 12th consecutive year. But this means little when you consider that, though the rate has dropped remarkably as a whole in those 12 years, violent crime has steadily been on the rise since 2013. The murder rate rose 17 percent in 2015, too. Something else to consider (that Eric Nicholson at the Dallas Observer has already pointed out): Back in 2004, Dallas was the most dangerous major city in the country with an astronomical rate of 8,972 crimes per 100,000 people, but it’s easier to decrease the rate in a city with an outrageous figure than in a region with less egregious crime stats. Also, this is a little bit of a different topic, but Brown has also boasted that 2015 saw a 67 percent reduction in excessive force complaints, which is indeed a big drop. But, holy shit, how bad were things in 2014 that things were even able to drop by such a large percentage?

Dallas is a world-class city. Dallas is a good city. It is not, however, a world-class one. The public transportation is terrible, and a large number of the amenities we claim — like professional football and baseball teams, and, uh, Six Flags, I guess — exist outside of the city limits. World-class cities are of the world. They’re global destinations. They’re the first pick off of the bench when it comes to nearly everything, from commerce to entertainment to being the place where spoiled brats want to summer as a verb or shack up when they graduate college. Dallas just isn’t that yet. As Larry McMurtry once said: “Dallas is a second-rate city that wishes it were first-rate.” Maybe Dallas should just embrace its Scottie Pippen-ness? Scottie Pippen was pretty good too. Not everyone can be Michael Jordan.

The Dallas Cowboys are the Dallas Cowboys. Sorry, but, as already noted, they just aren’t. They haven’t played a football game in Dallas proper since 1971, and they will probably never play another game in the city ever again. The Dallas Cowboys have shacked up out in the suburbs for nearly 50 years now, folks. They only have “Dallas” in their title for marketing and traditional purposes. They are the Arlington Cowboys. Deal with it.

Public transportation is not important. As we all know, Dallas exists a part of a massive sprawl. A car makes navigating this massive sprawl less of a headache, sure. But our public transportation system doesn’t really help matters. It’s embarrassing how bad DART is — especially when looked at with the knowledge that most every great city in the entire world has in place a public transportation system that isn’t a) totally nonsensical, or b) more useless than manageable. Worse, DART’s light rail is essentially designed to make life easier for commuters outside of the city rather than those within it. The fact that you can’t take a train from Lower Greenville to Bishop Arts and then to Deep Ellum is just poor planning. And the worst part? We’re probably too far along in the game for any easy fixes in this regard. Consider this: DART’s light-rail began operating in 1996 when car culture was already long past its initial bloom; meanwhile, New York’s subway system bowed in 1904 when America’s infrastructure was still being blueprinted. Them’s the breaks.

Dallas is a baseball town. First off, just like the Cowboys, the Rangers play in Arlington, not Dallas. OK, now that we’ve gotten that out of the way, let’s move on to when Josh Hamilton shared his thoughts on Dallas not being a baseball town in the media following his trade to the Los Angeles Angels of Anaheim in 2013. The guy was met with some serious derision from Rangers fans. But was he wrong? The Rangers won the American League West last season, but its reported home attendance figure of 2,491,875 people through the Globe Life Park turnstiles in 2015 was the team’s lowest figure since 2009, and only good enough for 16th-best in baseball. Worse, that figure has consistently dropped since 2012, the year before Hamilton was sent packing. The guy’s back in a Ranger uniform these days, and he’s since apologized for his comments, as is his duty. But the numbers don’t lie.

The D.O.C. got his voice back. So, uh, The D.O.C. did not get his voice back. The rapper is a true legend and we’re glad he’s performing again. Bless him. But that voice is not back in the way in which it was advertised ahead of his most recent show at The Bomb Factory. Here is an excerpt of a review I wrote for Texas Monthly about his homecoming show that delves into the whole voice situation: “The D.O.C.’s voice is back, yes, but only if you put an asterisk, footnote, and clause behind that statement. If he concentrates, he can make his vocal chords operate smoothly. For a short amount of time, he can speak clearly, hum, and harmonize. For periods longer than a few moments, however, his voice becomes grating and rough, almost robotic and mechanical. When he raps, it comes out as a deep hoarse tenor; think Rick Ross with the flu. Nobody wants to hear The D.O.C. perform his old songs that way, especially when it’s such a departure from the masterful and nimble style of the late eighties-era D.O.C. For the most part, he lip-synced his songs. And it was kind of disappointing. However, given the implausibility of the concert happening in the first place, lip-syncing or not, it was still a once-in-a-lifetime type of event.” Really, that concert had nothing to do with a voice coming back, but with novelty and clinging onto what could have been.

Dallas is a great city for gay people. Sure, Dallas is home to the largest gay-inclusive church in the world. Sure, Dallas has made its way onto multiple lists of “gay-friendly” cities in the country. But that hasn’t stopped bigots from committing a frightening number hate crimes in Oak Lawn in the last year. Just because the gay neighborhood in Dallas is cool as shit and booming and fun doesn’t exactly mean it’s safe to be gay there.

Uptown is the worst. Uptown Dallas sure has a reputation — and it’s one that’s probably has some degree of merit, we admit. Yup, there are more douches per capita in Uptown than in any other area of Dallas proper. Yes, they have racist bars in that part of town. But here’s the thing about Uptown: It’s one of Dallas’ only truly walkable neighborhoods. It also has a train station, grocery stores, a trolley, some fun bars, plenty of nice restaurants and easy access to a freeway. Young urban professionals move to Uptown for a reason. Shake your fist all you want at these kids for all-too-happily living inside that bubble and not experiencing all the rest that this town has to offer. But don’t flatly label them all as jerks for doing so. They’re not all that bad, really.

Homelessness isn’t a major concern. The number of chronic homeless people in Dallas shot up from 489 to 615 from 2014 to 2015, but it now looks like those numbers are actually not accurate and far lower than they should be. Seems the Metro Dallas Homeless Alliance has been erring on the low side when tallying its count over the years, and Cindy Crain, its newish executive director, is looking to get some more accurate numbers. Here’s a bonus lie: Homeless people are evil. You can thank the numerous Dallasites who take to Twitter to shame homeless people publicly for perpetuating that myth, though. Double bonus: All panhandlers are homeless, and all homeless people are panhandlers. Nope.

Our roads will be fixed. Sorry to break it to you, but these roads will not be fixed. You will be travelling on roads better-suited for Jeeps for a while, folks. So maybe go purchase a Jeep. Mayor Rawlings has stated that our widespread pothole problem will take “decades” to fix and that this’ll just have to be the “new normal in the city.” He’s not wrong to say this: We’ve fixed tens of thousands of potholes and the streets still look like they’re having an acne breakout with all the craters. No, these streets won’t be fixed. Probably ever. Maybe this wouldn’t be a problem if the light rail system was better — but, well, we already covered that.

The Red River Rivalry is a big business boon. A common fallacy is that sporting events are a great boon to local economies. And while they can indeed help in some cases, they really have little to no significant actual value. The Super Bowl, the World Series, the NBA Finals — none of these events garner anywhere near their promised citywide revenues for anyone beyond the executives that run the operations. The annual Red River Rivalry between OU and UT is no exception. Some local business actually take a net loss because they over-staff or hire temp workers. Also, the rowdy football crowds drive off all the regulars, making the idea of just breaking even a noble goal. Fact is, the Red River Rivalry isn’t any more helpful to local businesses than a regular Saturday night that has good weather and falls on the payday when rent isn’t due.

Fuel City tacos are the best tacos in Dallas. Fuel City has its charms, for sure. It’s a gas station that’s open for 24 hours where you can go grab tacos when you’re drunk. Beyond that, though, there isn’t anything exemplary about these tacos. Look, they just aren’t the best. So why does Fuel City have a 4.7 rating on Zomato? Why does it have a full four stars on Yelp? I don’t know, but it’s time to stop this madness. Please. Any taco enthusiast will tell you that those things are over-hyped. Just cross the Trinity into Oak Cliff and go eat some tacos there.

Dallas is embarrassed to be the place JFK was killed. If an adored president got shot in the face in your city, you would maybe be a little embarrassed by it. Right? You’d think. And in some ways, we pretend like we are. But, really, we aren’t. Instead, we do some weird and downright bizarre chest-pumping on this non-accomplishment. A few years ago, a tour bus trumpeting our limp slogan “Big Things Happen Here” featured a picture of John F. Kennedy’s face on it. Awkward. Also not great: For some reason, we all stopped down to celebrate the 50th anniversary of that assassination a couple years ago. Also, we have a bar named after Lee Harvey Oswald that’s universally adored, and people get a weird kick out of going to the movie theater where he was caught. Oh, and what’s that? You want to film a movie about JFK’s death here? Go right ahead; we’ll even shut down all the streets for you to make it easier. The way that Dallas treats JFK is strange, you guys. We should all sit down and talk about it sometime.