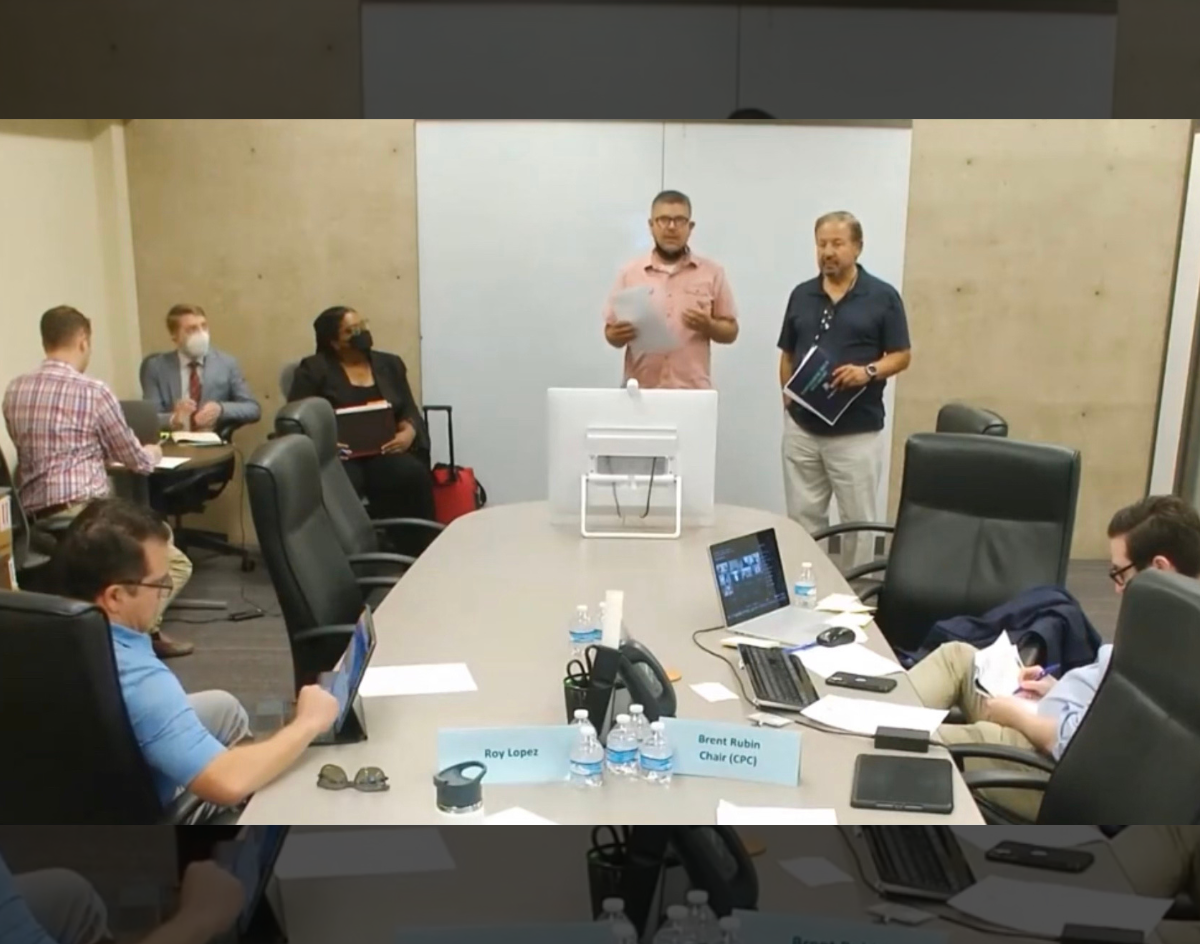 WTF Is Going On In Oak Cliff?! The West Oak Cliff Area Plan Is Nearing The City Adoption Deadline. Here’s What It Means For Our Favorite Neighborhood.

Earlier this year, we began hearing murmurs of a West Oak Cliff Area Plan (WOCAP) initiated by District 1 council member Chad West. Like most, we shrugged our shoulders at the 172-page draft, full of jargon and acronyms that can be challenging to understand, at first, but we weren’t about to just let it slide.

If you didn’t know, love for Oak Cliff runs deep. Oak Cliff contributes highly to DFW’s arts and culture thanks to its close-knit residents — some of whom we’ve written about before. We’ve highlighted the badass Latina entrepreneurs of Malcriadas Collective. We took you behind the lens with Oak Cliff’s boudoir photographer Cinthia Jaimes. We even introduced you to “La Toxica.” And don’t get us started on our devotion to the Texas Theatre.

When claims of gentrification, predatory buying and West Oak Cliff becoming the next Bishop Arts began to swirl online, hearts began to crack. We even asked ourselves, “What the heck is going on and what does WOCAP really mean?” Oak Cliff residents were equally as confused.

“Oak Cliff used to be more left alone, by city oversight, which allowed district one, or local communities in this area, to do what they wanted without too much city involvement and that in itself created a culture,” Karina Moreno, newly appointed Polk-Vernon Neighborhood Association president, says. “Now that the city is trying to be involved more and wanting to, kind of, dictate what people are going to do, and what the place should look like, I think that’s harming us more than helping us even though it can look good on paper.”

Is WOCAP the end of Oak Cliff as we know it?

Here, we take a look at the final draft of WOCAP, break it down and filter through the rumor mill. Let’s begin.

WOCAP does not include all of Oak Cliff, it just affects 5.01 square miles of it. The affected neighborhoods include Hampton Hills, Jimtown, Ravinia Heights/Kessler Plaza, Beverly Hills, Elmwood, Polk-Vernon, Sunset Hill, North Cliff, South Edgefield and East Hampton Hills. This means 11,554 estimated households and 43,905 people will be impacted by this plan, of which 86% identify as Hispanic or Latinx.

Why this happening? Land Development.

The big question is why? Essentially, land development because Oak Cliff has the land Dallas wants and needs to fit a city-wide vision. At a June 14 Comprehensive Land Use Plan (CLUP) committee meeting, the committee highlighted the goal of establishing “a land development vision for the study area to be integrated into the citywide comprehensive plan update.”

That vision includes increasing density, as in making more space for more people in Oak Cliff. The city plans to do that by creating multi-family home spaces and revamping the area to attract the people to fill those spaces.

“We [community members] found that when we looked at the list of the people that were on the task force there was no representation from the Brown community,” taskforce member Yolanda Alameda says. “There were a few neighborhood associations, but then they had people like Bob Stimson. They had developers on the committee, and so we just started pushing back.”

West Oak Cliff has no representation.

WOCAP has four areas of focus.

Overall, WOCAP focuses on land use and development, transportation and infrastructure, inclusive community development and quality of life and parks and open space.

It’s actually not all bad.

According to the plan, the vision for West Oak Cliff is equitable, enriching, safe and healthy, economically resilient and welcoming.

Density: The community draws the line at three-story buildings.

According to the Texas Realtors relocation report, 192,000 – 222,000 new residents moved to Texas in 2019. From 2014 to 2018, 15,284 people moved from Tarrant county to Dallas county. It’s clear Dallas is full and busting at the seams. The city is pretty keen on filling West Oak Cliff up with the surplus of newcomers.

But according to West Oak Cliff residents, sky-high complexes are a no-go. The neighborhoods, backed by city zoning ordinances, have drawn a strong line at three-story complexes.

“Our recommendation for the entire area is simply for a form-based district that is no more than three stories tall and subject to the proximity slope to the surrounding neighborhoods,” CLUP committee chair Brent Rubin said at the June 14 meeting.

Despite the three-story plan maximum, the community remains hesitant and many want to retain the single-family home integrity.

Christine Hopkins block walked with nonprofit Somo Tejas to inform and survey residents in the Tyler, Edgefield and Clarendon neighborhoods about WOCAP. She, along with approximately 30 other community members, spoke at the June 14 CLUP meeting.

“What we take issue with in the WOCAP plan is on page 122,” Hopkins says to the committee. “There are discussions that say the area bounded by Edgefield, Clarendon and Tyler and the Dart line are continuing to have discussions to explore additional densities such as townhomes and multifamily up to three stories. I strongly believe that needs to be deleted from the plan. It does not reflect what the neighbors want. We got a 33% engagement rate and 77% of the people want single-family homes, that needs to be deleted. It’s not what the neighbors want.”

The fight to keep autocentric businesses.

“The last major change that should be considered to the existing zoning is to prohibit automotive-centric uses, including drive-thru restaurants, drive-thru banks, car washes, gas stations and auto repair shops to facilitate the type of walkable, mixed-use development desired by the community,” reads page 77 of the final draft of WOCAP.

Most automotive repair or tire shops in Oak Cliff are Latinx-owned. Some were not aware of the impacts WOCAP would have on their business.

Nonprofits Somos Tejas, Rayo Planning and the West Oak Cliff Coalition arrived at the June 14 meeting equipped with automotive shop owners to speak before the committee.

Enrique Subias has owned his Oak Cliff auto shop for 17 years and his future plans include buying a home for his family close to his shop. Last week, his daughter received a letter about WOCAP and brought it to his attention. At the meeting, he pleaded for the future of his shop and his family’s livelihood to CLUP.

“This is my family, what am I going to do if this plan goes into effect,” Subias says in Spanish. “Hopefully not, but we’re here to fight.”

Subias fears his neighborhood will become inaccessible, like how Bishop Arts has become.

Aidan’s State Inspection 4 owner Vanessa Saldaña also spoke in front of CLUP. She recounted the obstacles of navigating being a female business owner in the automotive industry describing feelings of inadequacy and discrimination because of her gender.

“I feel like that’s what I’m hearing now about wanting to get rid of the automotive industry in Oak Cliff,” Saldaña said. “That we’re not good enough. We don’t fit your plan. That it’s the decision of the community to eventually get rid of it because it’s what the community wants, but I’m part of the community and I’ve never heard that.”

Numerous community members spoke on WebEx and in-person in favor of autocentric businesses. CLUP unanimously voted to postpone the progression of WOCAP to the City Plan Commission.

The WOCAP final draft is available in Spanish here.

The community put CLUP’s hands to the fire over gentrification.

Part of the postponement is attributed to concerns over gentrification. That word gets thrown around so to clarify, here’s the definition. According to Oxford, gentrification is the process of redeveloping a poor urban area to attract wealthier people which typically displaces current inhabitants.

This is how it typically goes.

With the facelift WOCAP aims to give West Oak Cliff, many keep asking who? Who is this for? Why? What happens to the current residents? When market values skyrocket and homeowners cannot afford the taxes, what’s next? Are they on their own? The questions pour out in a panicked flurry.

Young Nino & Hot Boy Star had it right. Oak Cliff is Oak Cliff’s hood, and it should stay that way. The residents of Oak Cliff have curated a hub where neighbors look out for each other, and now last decade’s youth is this decade’s advocates. Oak Cliff has raised lawyers, entrepreneurs, artists, advocates and leaders. Wiping that out would be a detriment to the DFW landscape.

Resident Deborah Carpenter demanded accountability for a plan to prevent gentrification. At the meeting, she asked questions relating to plans for avoiding displacement. CLUP cited conservation districts as a tool to prevent displacement.

Carpenter made a motion to continue the discussion of autocentric businesses and to be provided with an anti-displacement toolkit and a briefing at the next CLUP meeting.

As we saw with the speakers at the CLUP meeting, community advocacy and Carpenter’s motion for continued conversation, speaking up makes a difference.

“If we didn’t get involved, like we did, the plan probably would not have reflected, to the extent that it does, it wouldn’t reflect the neighborhood’s desires,” Alameda says. “And through our advocacy, I think it reflects us a lot more than it would have.”

Alameda says most of the area is maintained residential through the advocacy of the community. She recommends Somos Tejas as a way for residents to get informed and involved. She also encourages residents to get involved with their neighborhood associations.

The plan is anticipated to progress to the City Plan Commission on July 7 or 21. WOCAP will then go before the Council Economic Development Committee for a briefing on Aug. 1. It will be up for adoption before the City Council on Aug. 10 or 24.