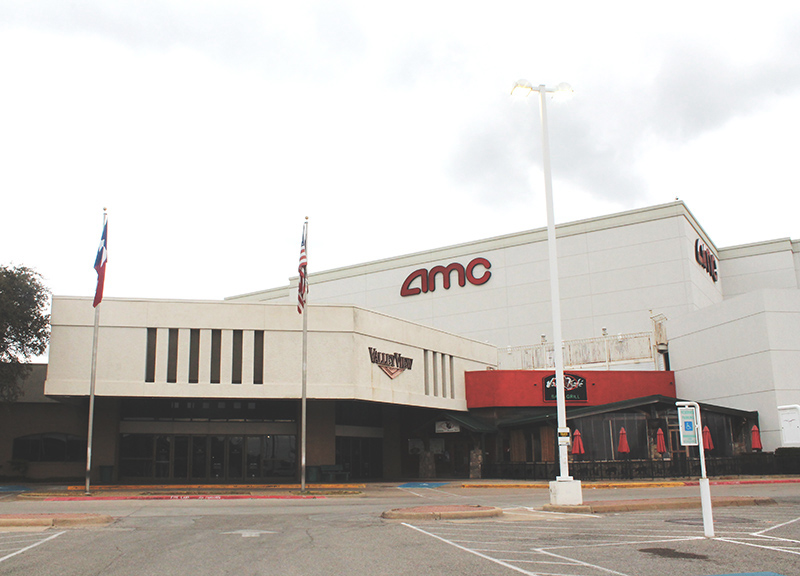 There is a fascinating, unsettling emptiness to Valley View Center. You’re (probably) not actually alone when you walk its halls, but the relative lack of human activity in what was designed to be a bustling space is acutely felt as you do.

The eerie sense of social deprivation, along with the curious fallout of the mall’s slow collapse, can be captivating: Areas of water damage blot the ceiling at one entrance; on the skylight by the now-shuttered JCPenney, only a quarter of the lights ringing the skylight overhead still work. Shops are frequently closed during standard business hours; in certain sections, so many of the stores will be closed that you’ll almost feel like a trespasser. These hiccups of disorder in what should be — and presumably once was — a tightly controlled environment make Valley View appear exposed, like you’ve caught it in some disarmingly vulnerable moment.

The smattering of fading “Now Hiring” and “Opening Soon” signs carry a grim irony: Beck Ventures, the group that owns Valley View, announced plans in 2012 to demolish the mall and replace it with an ambitious new mixed-use space; the official start of the demolition process began last month.

That being said, as of writing, the leasing office is operational. The North Dallas Toy Show is advertising scheduled events at the mall that run through the end of this year. Even as the promise of demolition lingers, tenants are still entering. Anna Crowdus, who owns and operates Paint My Pottery, moved in towards the end of last year, despite the impending renovations.

“[The lease is] open-ended,” she explains. “They told me that going in.” 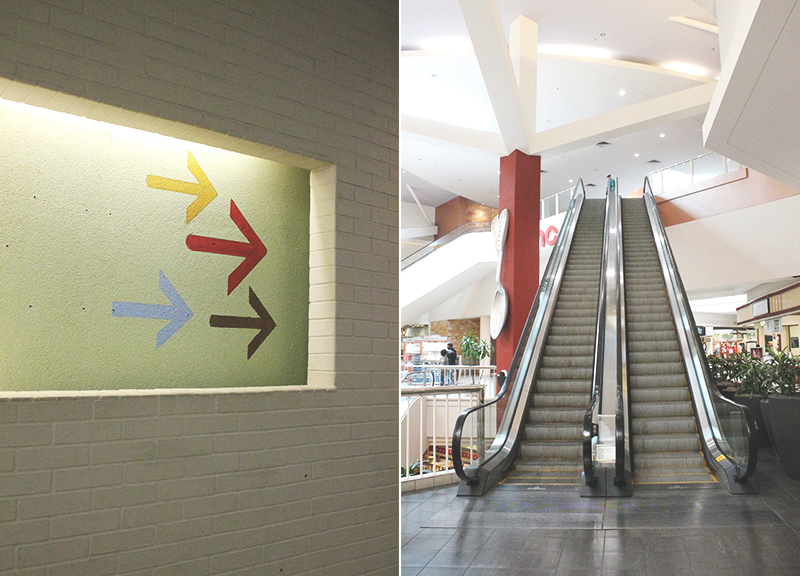 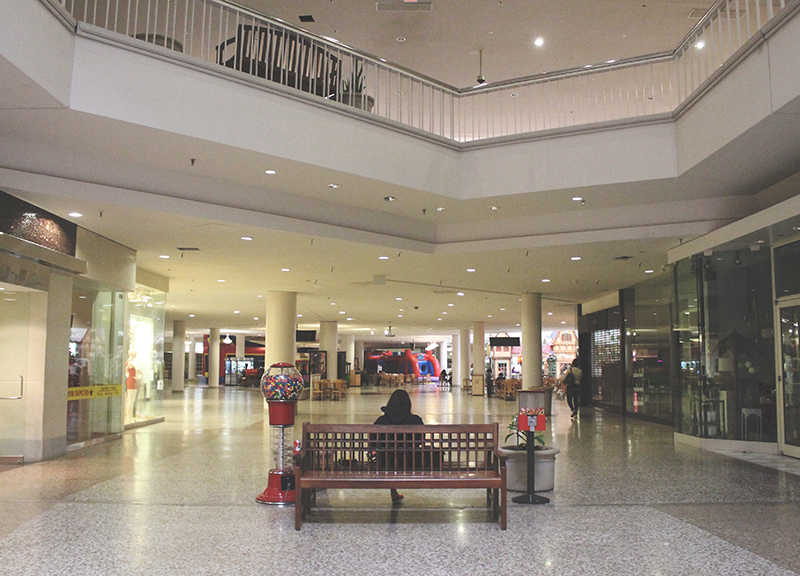 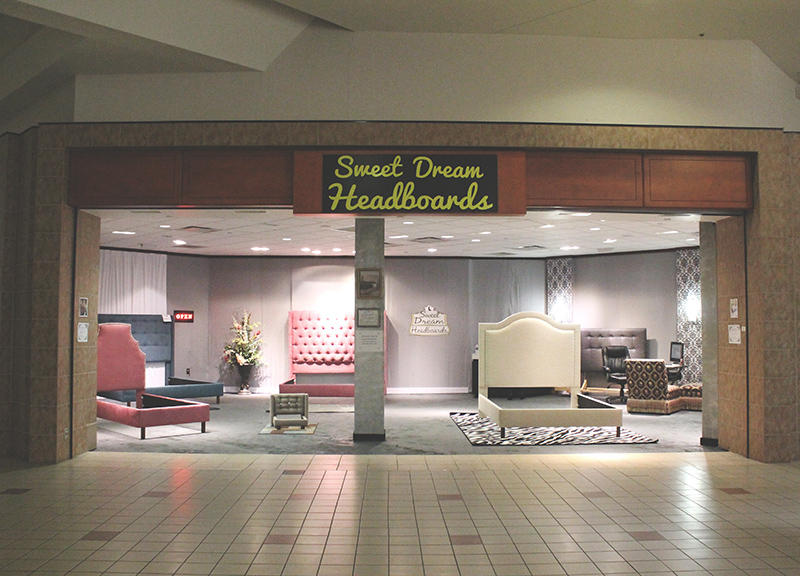 Despite the inherent instability in her leasing circumstances, she’s quite happy to be here: “I prefer having other artists around,” she says, referring to the Galleries at Midtown, Valley View’s efforts to bring in local artists, an initiative that was started by Beck Ventures. Her last location was at an outdoor shopping center anchored by a grocery store, which offered more drive-up traffic but left her without her art peers. As for her take on her store’s future and the mall’s redevelopment, she seems at peace with what’s to come.

“A lot of things are indefinite,” she says.

Businesses are still functioning here, including a Sears, which stands the final anchor store at Valley View. Their shelves are stocked, and there’s no visible sign of any plans to liquidate inventory in advance of closure. The only suggestions of trouble is the lack of foot traffic and two concealed escalators, which have been blocked off. Find the right angle, and you can glimpse an abandoned second floor.

In the evenings, though, Valley View can appear almost reanimated, as the AMC Valley View (located on the third floor) enjoys steady patronage, and the event center on the second floor is often rented out for quinciñearas and other social gatherings. (AMC Valley View runs films well past the mall’s posted closing, leading to a curious effect where mall attendance can spike near, or after, it’s supposed to be closed). 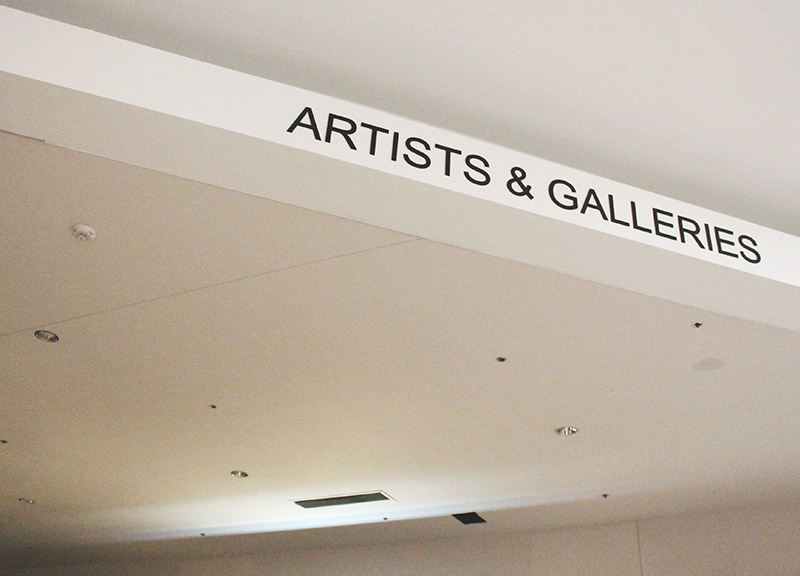 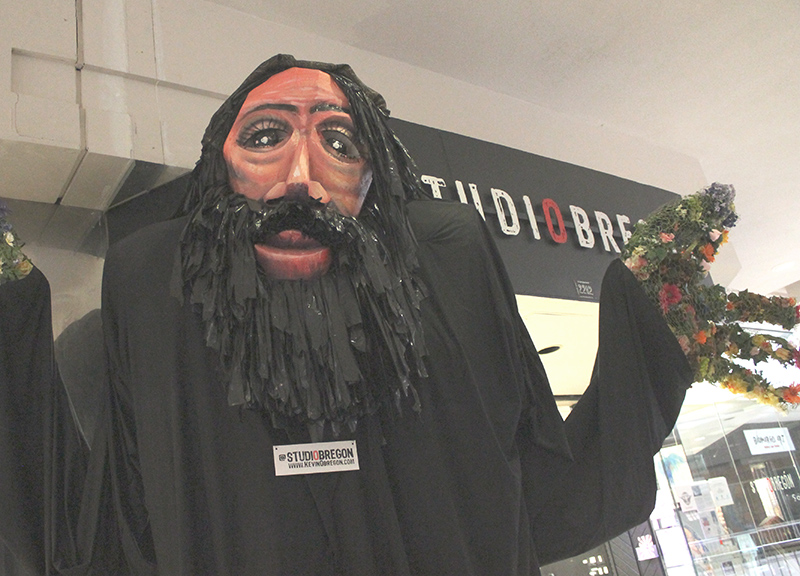 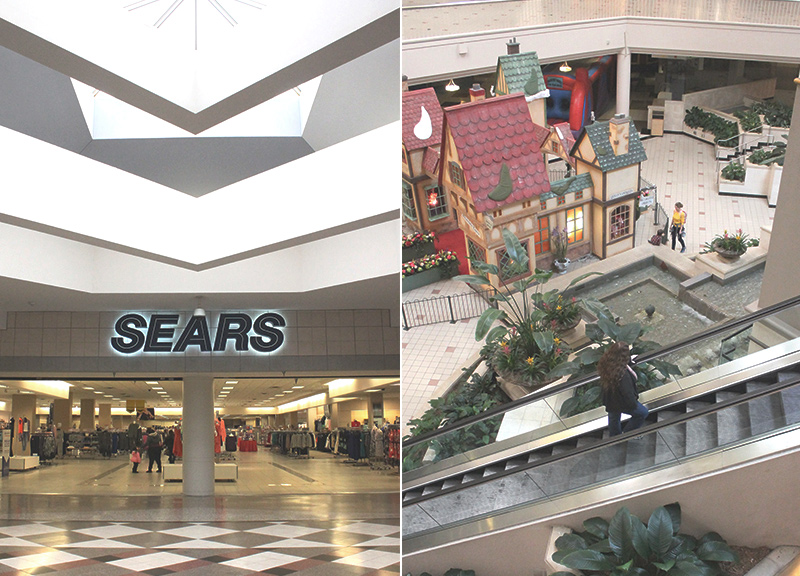 Kevin Obregón, whose Studiobregón has been a fixture here practically since the Gallery at Midtown’s inception, has had plenty of experience riding the waves of uncertainty around Valley View’s fate. When he originally leased his space, he was told it was his for 18 months. Then, 10 months into the lease, he was told they would “revisit” the original plan. He says he’s now been there for roughly four years.

“Blissfully happy” is how he describes his overall experience. He has a large enough office area in the back of his store that he can work in private, all the while still keeping an attractive, open gallery area out front for prospective buyers. “An incubator for your thoughts,” is how Obregón refers to his space.

But how does it fare for retail?

“I see maybe half a dozen people a day in the store,” he says. “Nobody really bothers you.”

Valley View is going down, sure. But it may have quite a lot of company going down with it. The economic prognosis for malls is grisly. Estimates in the last few years predict that 15 to 50 percent of all American malls will either close or be re-purposed in the next few decades. Macy’s released news in January of 40 store closures; granted, they also announced plans to open another five, but it’s still a sizable net loss of stores, and jobs.

Meanwhile, there’s a budding artistic interest in the demise of these mammoth shopping centers; photographs of abandoned mall interiors has almost turned into its own subgenre, and sites like DeadMalls.com actually track the demise of the retail superstructures. Interestingly Valley View was actually eulogized in 2011 by Dead Malls, although, considering it’s still with us, we can call that premature. Regardless, the artistic interest in malls is apparently a creatively evocative phenomenon — so much so that it’s even inspired a comedy-horror movie currently in the development stage. 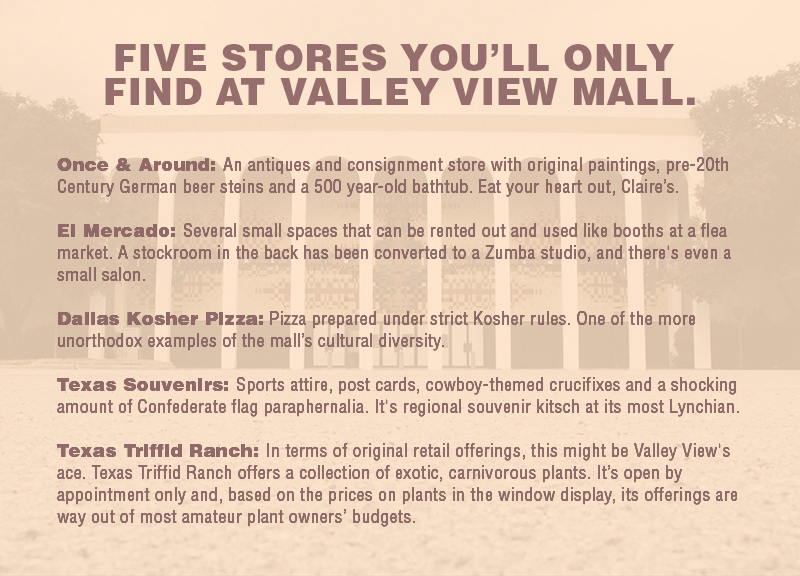 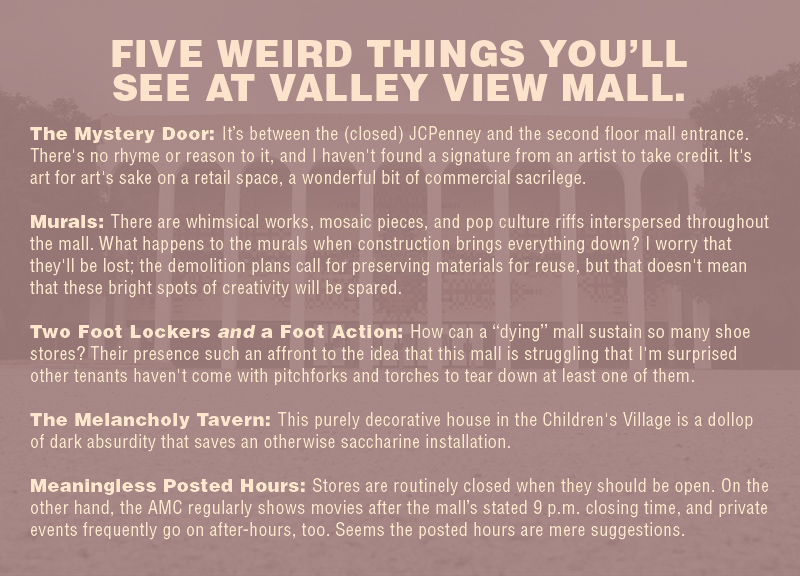 The closure of something as vast and (once) lucrative as mall culture makes for an understandable fascination. Clearly, online retail and social media together offer viable alternatives to the material and social appeal of malls, and you could interpret the increasingly frequent failures of malls as the economic sloughing off of an outmoded concept. But because malls that cater to a dwindling middle class can be more vulnerable, their downfall can also carry political baggage.

Still, Valley View’s problems may have been a little more prosaic: The Galleria Mall has long loomed nearby, and NorthPark isn’t far, either. Both offer the high-end retail that malls increasingly depend on, and their proximity makes Valley View feel especially obsolete.

* * * * *
Since 2012, Beck Ventures has been working on a plan that would transform the space occupied by Valley View Center into an outdoor, mixed-use area, one that would offer a hotel, apartments, a range of shopping options and even an outdoor park. The new space — called Dallas Midtown — is a city-supported endeavor to make the most of the prime location on which the mall presently sits.

The idea of an outdoor development that includes retail, dining, living spaces, and a movie theater sounds attractive and also familiar, concept-wise, to spots like Mockingbird Station, Uptown’s West Village and even Plano’s The Shops at Legacy. But it’s difficult to get a tight grasp of what’s coming when it’s so far off from actually being here.

Midtown’s unveiling been an arduous process, with quite a bit of ink spilled for the sake of reporting on the ongoing developments. But speculation on what will take the place of Valley View can risk leaving the current mall — and the retailers striving to stay afloat — out of the conversation. One shop owner we spoke with who asked not to be named worries that the talk about Dallas Midtown has turned off customers from even bothering to keep tabs on what’s still happening here, positing that the more people are caught up in anticipating what’s coming, the less they consider that there’s viable commercial activity currently occurring. 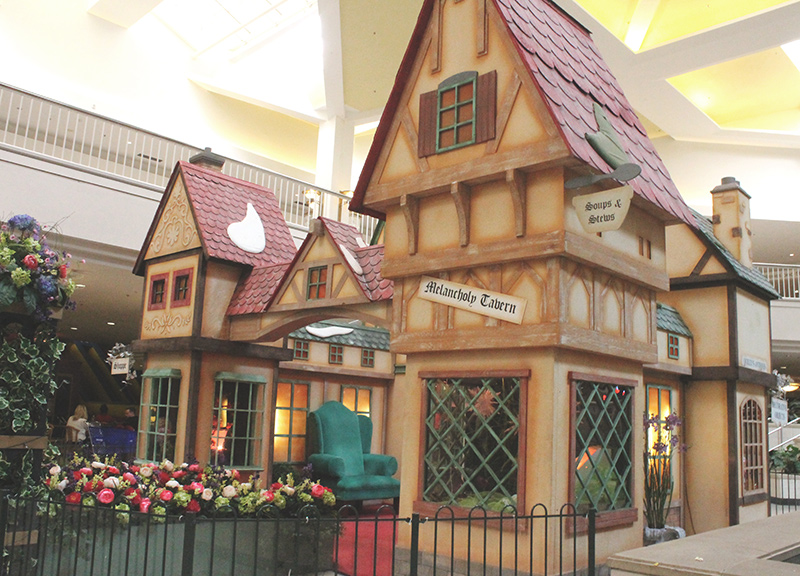 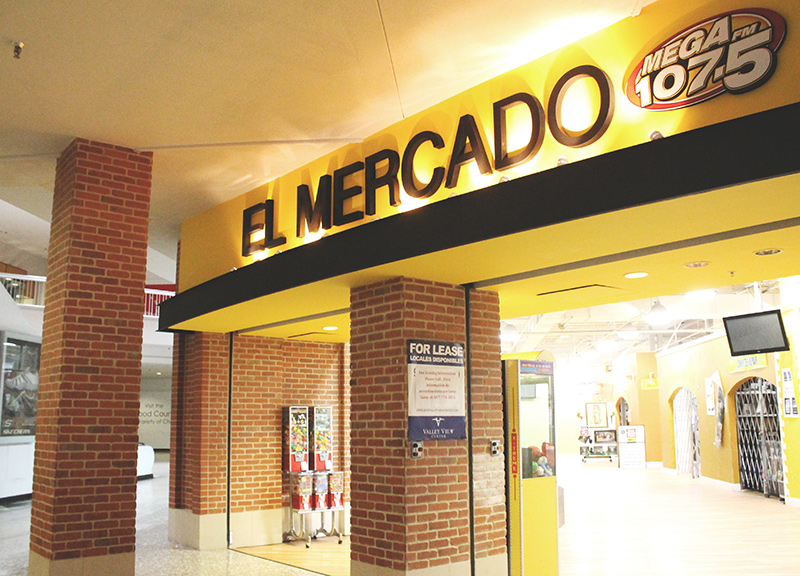 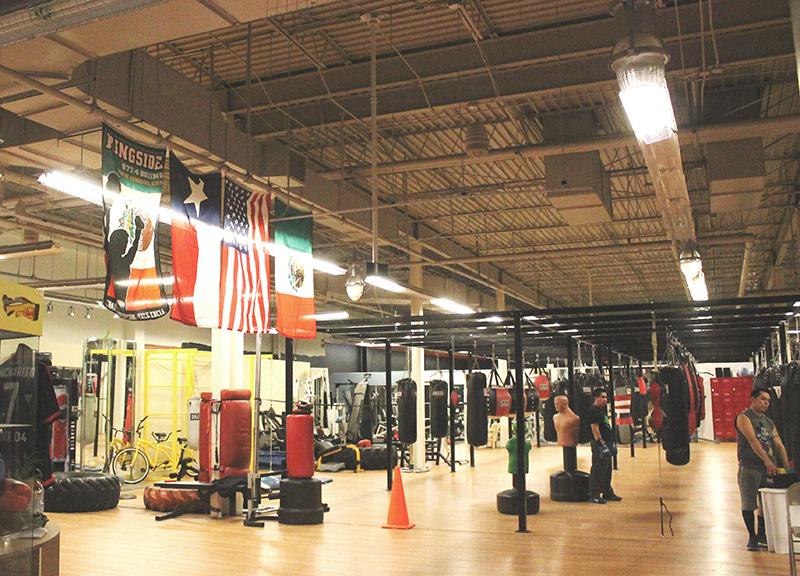 At the moment, Valley View Center houses a range of tenants: Art galleries are joined by souvenir and secondhand shops, independent clothing stores, fitness centers, a small consortium of New Age healers and artists, and a handful of identifiable retailers. It’s a mercantile Wild West that feels ready to embrace any sort of venture, no matter how nontraditional it might be. No one type of shop feels predominant, giving the space an eclectic energy that feels impossible to deliberately construct.

The Galleries at Midtown in particular has introduced something, as Obregón phrases it, “wonderfully ungentrifying” to Valley View. A broad spectrum of styles is on offer at the different gallery spaces, and a monthly exhibit called the Midtown ARTwalk gives everyone with the Galleries at Midtown an opportunity to showcase their works. The artists’ influence extends beyond their galleries, too, as several murals have been created in the mall in recent years.

Other sections of the mall possess a ruinous beauty. Because most of the anchor stores have closed, marble facades now welcome visitors to barred entryways. Some of these end points are dimly lit, and can be post-apocalyptically quiet. Certain features appear to be in operation solely for the purposes of boosting morale — the fountain in the food court, for instance, which is still gurgling and spouting away. From a business standpoint, Valley View almost feels like a radical economic experiment. It’s a sort of toothless capitalism on display here, a space where the pressure to outperform and grow at all costs has been removed, and people are simply encouraged to run their shops however they see fit. It imbues Valley View with an independence and diversity that most malls sorely lack.

But what’s especially interesting — and frustrating — about this is the nagging sense that Valley View has only become as unique as it is through essentially failing. Where a thriving mall could be expected to have a rigid, borderline martial discipline in regards to its operation, income generation and appearance, Valley View’s circumstances have let idiosyncrasies seep in. Even the closed off and overlooked spaces have a sort of archaeological appeal, where different strata of mall history are cataloged for posterity. The outdoor entrance to Sears appears so unapologetically bygone that it feels like a museum piece. Several fronts that have stayed shuttered and unchanged for longer have had the unfortunate/wonderful effect of preserving the decorative sins of the 1990s; teal, fuchsia, and purple clash so violently that it feels like they exist in a chromatic war zone. 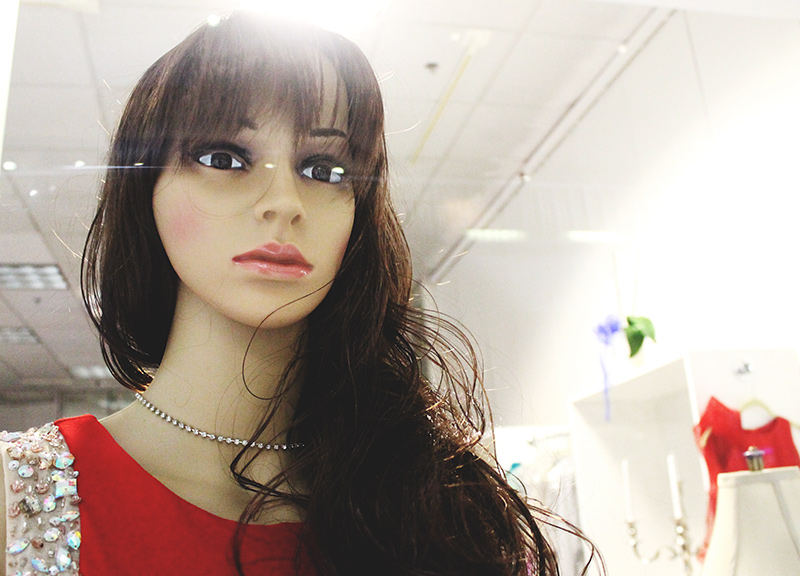 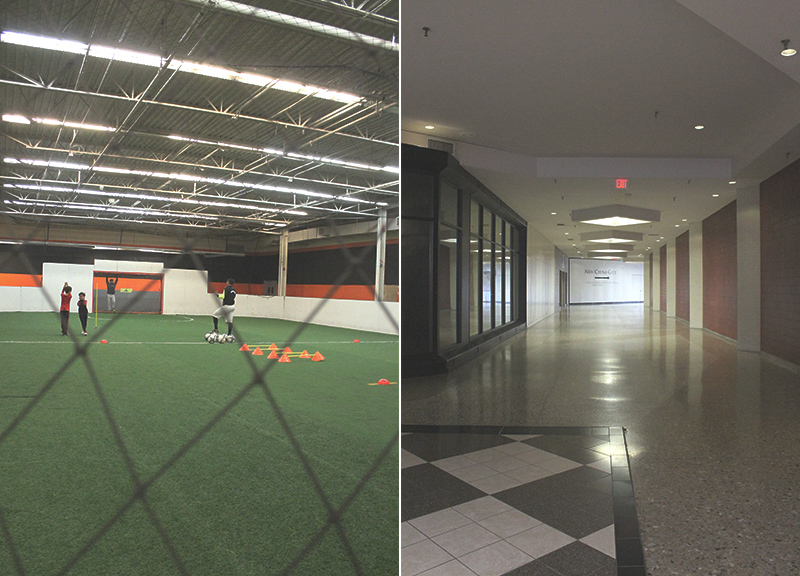 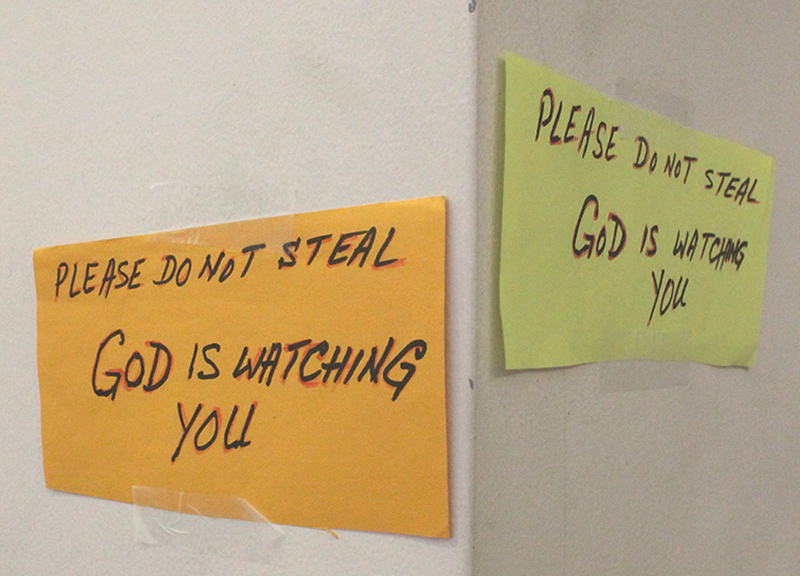 However long Valley View has left, it deserves attention. It should also be acknowledged that,, as beguilingly quirky as the mall has become, there are people who depend on it for their livelihoods.

Even if it has struggled to attract customers, the current Valley View could serve as a blueprint for what can be done with a failing mall. Entrepreneurs with limited means benefit from its abundant — and cheap — space. Many businesses expertly cater to the needs of Hispanic residents in the area, with many stores advertising exclusively in Spanish. Of course, no one with even the slightest business savvy could justifiably recommend gambling on upstarts or emphasizing local needs over luring the most moneyed clientele when more prosperous retailers are likely to offer bigger, more immediate gains. No, the Valley View model might not be sustainable without some kind of aid. But the idea of using public assistance to support the growth of desired private enterprise isn’t unheard of. In fact, across town, the city is doing just that: Last month, Dallas City Council agreed to hand over $2.4 million to a developer hoping to spruce up and improve conditions at the Southwest Center Mall (or the Red Bird Mall, as it was once known).

Whatever you think of Valley View in its present incarnation, it’s a place that offers real opportunity to fledgling businesses and accommodates the needs of its local community — qualities that should not be quickly dismissed. While we wait expectantly to see what Dallas Midtown becomes, consider what a vital service it could provide if it inherits Valley View Center’s current habit of nurturing small, Dallas-based enterprises, and striving to serve the needs of its neighbors.

An unlikely dream? Perhaps. But the same could be said of Valley View’s current state, too. 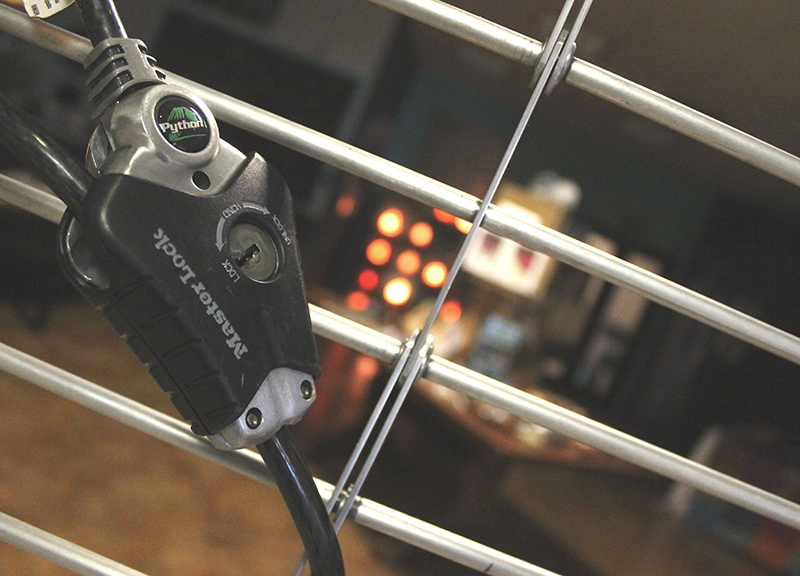 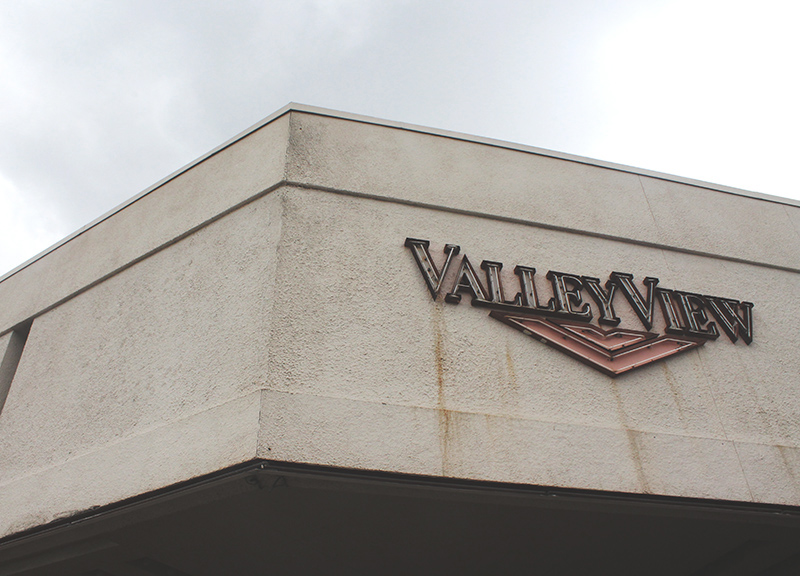 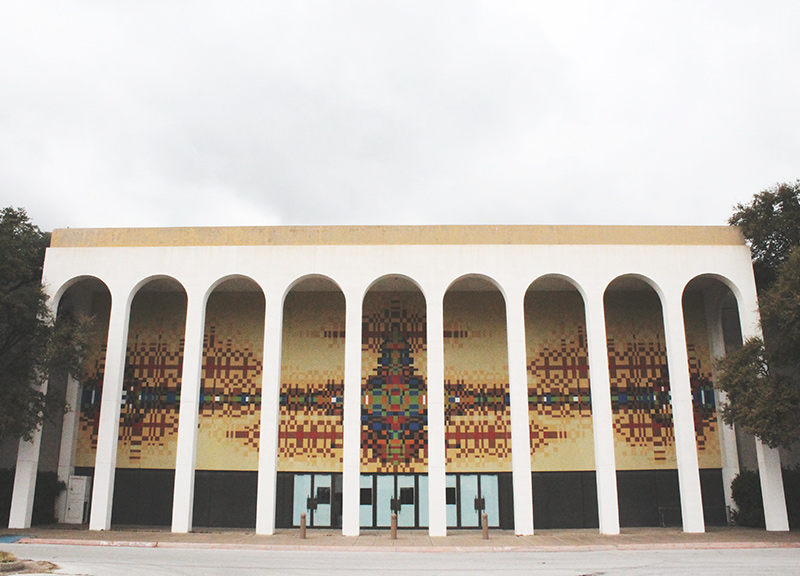