Things To Do On Tuesday, February 9. 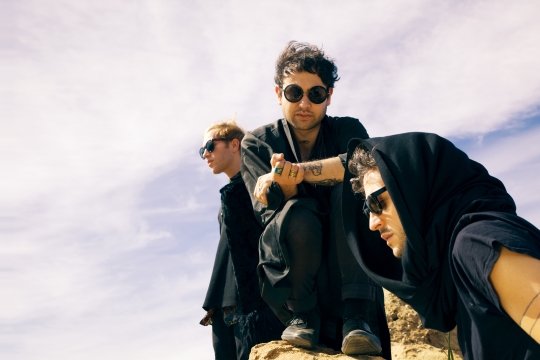 It's Mardi Gras again, that time when history dictates we prepare ourselves for Lent by getting all the debaucherous shit we're going to give up for the next 40 days out of our systems tonight. They don't call it Fat Tuesday for nothing, folks.

But you don't have to travel to New Orleans, or any other towns of French origins, to take part in the celebrations. Beads, king cakes, parades and crawfish eating will be found all over North Texas tonight. Plenty of other places you can get some proper sinning done, too, we imagine. — Cory Graves

Unknown Mortal Orchestra, Lower Dens at Trees (Sold Out)
Unknown Mortal Orchestra has been kicking ass with its 2015 album, Multi-Love, which reached No. 7 on the Billboard 200 indie chart. Joining them at Trees is Lower Dens which is fronted by onetime North Texan Jana Hunter. Now, based out of Baltimore, Lower Dens is three albums into its career. Each one distinct is from the other, but Hunter's haunted, pained voice consistently jettisons the listener into an aural ether. For more info on this one, check out our interview with Hunter here. — Roberto Aguilar

Deep Ellum Fat Tuesday March at The Free Man
Unlike most parades, the goal of this Deep Ellum parade is actually to get you to march in it with them. That's what they in New Orleans like to refer to as a second line. So get out your old horn from marching band, or just go by yourself and march with them solo. Either way, it should be a really fun time to walk through one of Dallas's best neighborhoods. — Paul Wedding

Mardi Gras Parade at Dallas City Hall
Because it's not socially acceptable to start drinking in the morning most other days, kick off your Mardi Gras celebration by checking out Dallas's Mardi Gras Parade. It's like the parade in New Orleans, but without girls flashing you or pickpockets. — PW

Mildred Pierce at The Magnolia
Mildred Pierce stars Joan Crawford in her only Academy Award-winning role as the mother who will do anything for her daughter. Even if that means marrying a man she does not love, or, perhaps, murder. Casblanca director Michael Curtiz gives you a film noir about a strong woman who will not do as she's told. The film was also nominated for five more Academy Awards, including best-supporting actress for Eve Arden's and Ann Blyth's performances. Showtimes are at 7:30 p.m. and 10. — RA

“Gut Instinct- Art, Bacteria, and the Gut-Brain Axis” Public Discussion at CentralTrak
Jens Hauser and Charissa Terranova of CentralTrak are holding a discussion about the interaction between our the thoughts in our brain and the bacteria in our intestines. They conclude that, indeed, consciousness is manufactured in our noggin as well as our gut. Weird, but true. This totally explains being hangry. — RA

Mardi Craw Party & Crawfish Boil at The Rustic
The Rustic is celebrating Mardi Gras with a crawfish boil. Kicking off at 11 a.m., the boil includes the typical crawfish, potatoes and corn. Plus, there will be andouille and chicken jambalaya served all day. The real party starts at 5 p.m., when Austin's Temeca Jones begins her set. Her voice is serene, soulful and on-point, and her six-piece band plays tight like the pinch of a mudbug. — RA

Tuesday Night Trash: Future Hunters at Texas Theatre
The '80s was a wonderful time, especially for low-budget action movies. Future Hunters is a mess of a movie, with poorly edited and shot action scenes and terribly audio dubbing, though it makes up for its poor execution with its hilarious incompetence. It also has Robert Patrick in it, aka the fucking T-1000. — PW

Bloodstream Alamo Drafthouse (Richardson)
Bloodstream is the kind of movie to watch when you're hammered and wanna take the piss out of something with your friends. It's a b-horror movie from 2000 centering around a young filmmaker whose movie is rejected by a producer. Naturally, his response is to don a skull mask and go on a murderous rampage. — PW

Jamiroquai Tribute Night at RBC
RBC is continuing its weekly networking sessions with a night of open jam Jamiroquai tributes. Did you know the Grammy-winning British acid jazz/funk band, that made a mark in the '90s with its “Virtual Insanity” video, has a new album coming out this year? Welp, they do. So come dance and meet some of the members of the Dallas creative scene. — PW

Pile (Solo Set) at Rubber Gloves
Pile is a Boston post-hardcore band with a sound of discord designed to makes listeners feel anger, sadness and pretty much whatever they feel like. The non-traditional sound combined with the singer's half shouting/singing brings to mind a traditional punk sound with a new experimental twist. On this tour he's trying to pack that same intensity to a solo set. Dallas' Bare Mountain is similar to this by playing songs meant to bring you into the psyche of its lead singer. The band writes songs to make you feel the same anxiety and stress that he goes through. Whimper isn't really like either of those, as the band has a more traditional alternative rock sound with a singer that actually, well, sings. — PW