Since GOP Messaging Is A Mess, Rockwall Republicans Are Pushing A “Badass” Ted Cruz Image While The State Party Slams Beto O’Rourke’s Seriously Cool Past.

Republicans are sure going out of their way to make Democratic senate candidate Beto O’Rourke look cool in advance of his showdown at the polls with sitting Senator Ted Cruz in November.

In some sort of twisted retaliation attempt to lay blame at Beto’s feet for that tentative Dallas debate not going on as proposed, the GOP posted a couple of #TBT photos of the democrat that only served to make him look like a total badass. In a trio of tweets, Texas GOP took stabs at the candidate’s ability to skateboard, the fact that he was once in a rad punk band and that, even in mugshots for crimes which he was not convicted of, he’s still able to look handsome as heck.

Turns out, though, it’s not just at the state level that the GOP is so out of touch.

Yesterday, the Rockwall County Republican Party proudly shared that it had printed up some keepsake posters depicting Ted Cruz as a shirtless, muscular, tattooed, cigarette-smoking badass. 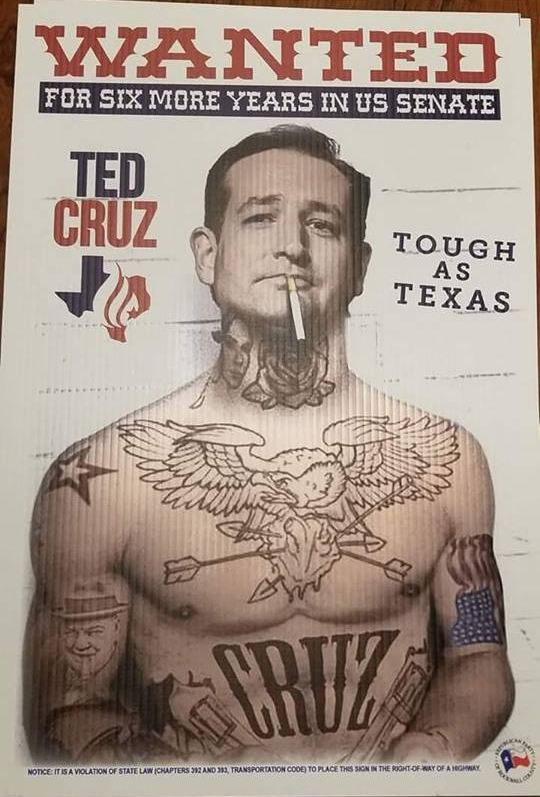 The artwork is a ripoff of a 2014 poster by Sabo, who is known as the “right-wing Shepard Fairey.” When it first made the rounds back then, Cruz was pleased with it, saying that “the only thing [he saw that] was wrong with the picture is that he doesn’t smoke.”

SEE ALSO: Is Beto O’Rourke’s Campaign Texting Itself Out of a Win? // Could Beto For Texas’ Text-Message Campaign Actually Annoy Potential Voters Out Of Supporting His Bid To Unseat Ted Cruz From The Senate?

In the wake of the Rockwall County Republican Party’s posting about their version of the artwork, the image was shared hundreds of times on Facebook — some in support of the visual, no doubt, but with a not insignificant number of those shares coming ironically.

Either way, as of this morning, the organization deleted its original post touting the art and claimed it was all sold out of prints. Which, hey, maybe they really are.

Still, it seems like the GOP is kind of all over the place with its messaging this week, huh?

The onetime long shot O’Rourke, meanwhile, has pulled within a point of Cruz in the polls and is being talked about as a viable 2020 presidential candidate. And that’s all before being slated to appear on Ellen next month.

Are you starting to believe?