The New Parent’s Guide To Drinking. 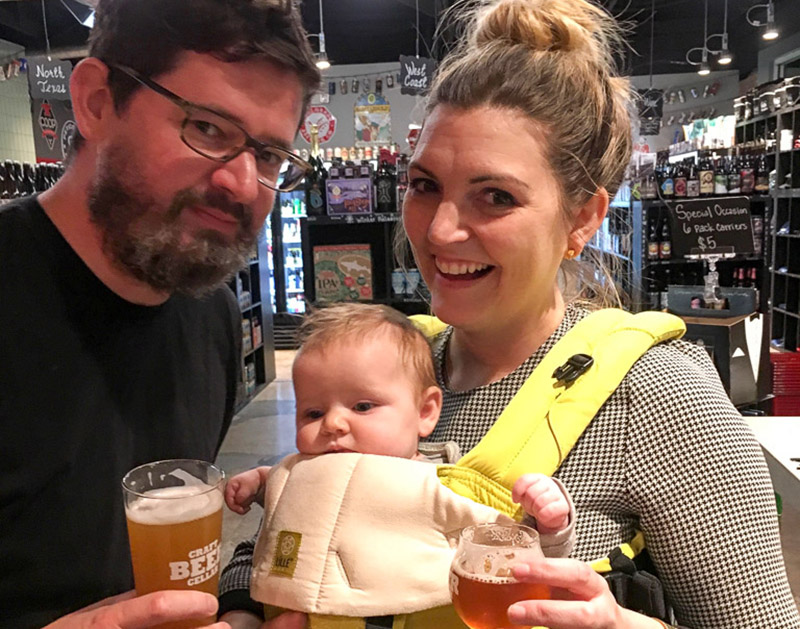 Did A Little One Recently Join Your Family Ranks? Here Are Some Tips To Help You Prepare For Your Next Beer Outing — With Your Baby In Tow.

I love beer, I really do. But I also really love my new daughter, even if she’s just an infant and isn’t much of a conversationalist just yet.

It’s OK for me to love them both, it turns out. Contrary to teetotaler belief, so long as you’re not irresponsible about it, being a new parent does not at all mean that you have to give up your affection for beer.

You just have to be smart about it, is all.

To that end, I’m going to use this space to share with you what I, a professional beer admirer, has learned in my first few months of fatherhood about how to survive – nay, thrive! – in the North Texas beer scene with baby in tow.

It’s all about the prep work. This is a pretty obvious bit of advice to any new parent, but if you’re going to leave the house to go do anything with a baby, you need to be prepared. Likewise, if you’re going to meet up for beers with your baby, you need to make sure you have everything your baby needs to survive for a couple hours. Get those chilled baby bottles ready, get those diapers and wipes packed away, and bring along a couple extra onesies just in case. No bottle warmer? No problem! If you baby starts to melt down while you’re mid-beer, just tuck a bottle in your armpit and get to shushing and swaying. No changing station? That’s no problem, either! Pack a changing pad and you can change the baby almost anywhere. Again, I know that this is all pretty basic stuff here, but it needs to be said.

Uber or Lyft it. Believe it or not, it’s incredibly easy to Uber with a baby! My wife and I have used Uber a lot with our little one — mostly for the sake of ease and sometimes so we can go get that drink on — and it’s pretty easy. If you don’t use a ride-sharing service, well, that’s on you. Just remember that you gotta stay on that parent game at all times — there are no breaks! But, fortunately, almost all carseats have a seatbelt routing notch that allows you to go places without bringing the pesky carseat base along.

Use a buddy system. This sounds like silly advice. But, c’mon, why would you really want to drink alone? That’s for at-home moments. If you’re going out with your baby to go get your drink on, make sure you’re doing so along some trusted friends who can hold your baby in case you need to go to the bathroom — or who can step in to help out if you need an extra set of hands to carry more beer back to your table.

Get a wrap and go hands-free. Get a Solly or Boba wrap. Pay no mind to the fact that both of these companies show exactly zero dads on their websites — the services these tools provide are useful for parents of all genders. Another perk? Beyond the fact that they free up both hands for you, these things are also great at keeping strangers’ hands off your baby. Not into the wrap thing? Check out one of the many other baby-carrier options available.

Embrace early drinking. Let’s face it: Each time you leave the house with baby in tow, you never know how it will work out — you’re basically carrying around a ticking time-bomb. Part of knowing how to handle an emergent situation includes knowing how to time your trips so as to mitigate the meltdowns themselves. So, for that, I say go early. There’s nothing wrong with a little daytime drinking.

Session drinking is best. Focus on session beers. No, this doesn’t mean you have to skimp on flavor. Just reach for these kinds of brews: Heffeweizen, Wit, most macro lagers, Pilsner, Kellerbier, Helles, Oatmeal Stout and, well, the list goes on. Just because you are on dad duty doesn’t mean you can’t have a few beers. Just don’t get wasted. You don’t want to end up on the nightly news.

Surprisingly, most breweries around town are fairly baby-friendly. Really! As long as your kid isn’t going to run off and touch the equipment — the brewers don’t like that, shockingly — most North Texas production breweries are built on large warehouse-type pads that are flat and easy for stroller access. If I were you, though, I’d skip a brewery tour with baby in tow since those things tend to get a bit crowded, making it difficult to navigate a stroller.

Embrace the places that embrace babies. There are actually more than a few spots around town that, perhaps in spite of their initial intentions upon opening, have turned into havens for young parents who are looking for a sip of some sweet, delicious brew while parenting at the same time. Here are a few of my favorite such spots:

Obviously, these are all general tips. Mostly, drinking as a parent is all about knowing your own limits and those of your baby. A good rule to keep in mind? When in doubt, maybe don’t get that last beer.

Beyond that, just always be sure to drink — and parent — responsibly.