Mesquite Police Shot Man For Breaking Into Own Truck. 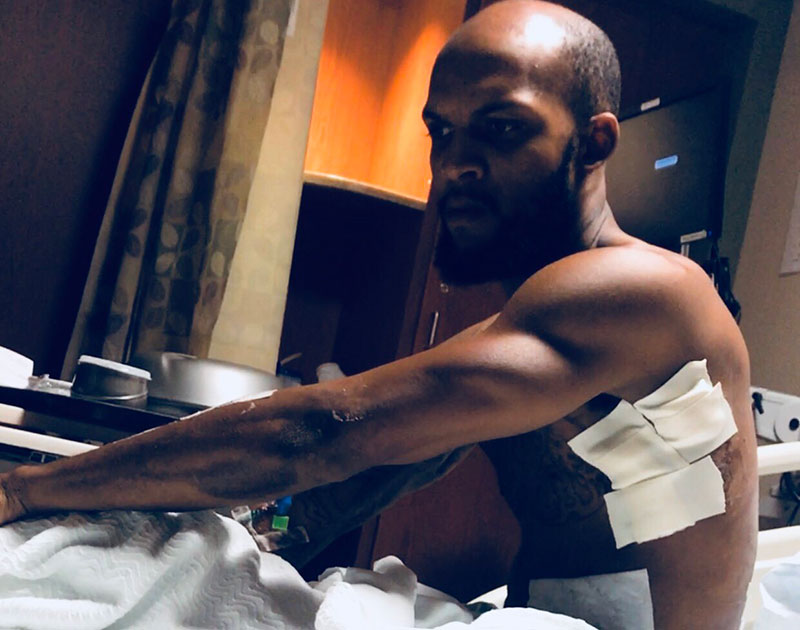 Lyndo Jones Was Shot Twice On November 8 After Police Responded To A Call About A Vehicle Break-In — But The Vehicle In Question Actually Belongs To Jones.

That night, cops in the Dallas suburb responded to a call about a person breaking into a vehicle and causing its alarm to sound. But Jones and his attorneys are now wondering why he was shot at all — especially when considering that the vehicle in question actually belongs to Jones.

“What did I do to deserve to get shot?” Jones told CBSDFW last night before leaving the hospital. “Nothing. I didn’t do nothing. That’s my vehicle. I work hard just like the next man — calluses on my hands from working.”

In its public statements about the officer-involved shooting, Mesquite police claim they got into a scuffle with Jones upon arriving on the scene, saying that 10-year police veteran Derick L. Wiley shot Jones and then handcuffed him because Jones exhibited “such physical strength” that it took two other other officers to hold him down.

Jones was not armed at the time of the shooting. Wiley, per police protocol, has since been placed on administrative leave. He is not currently under criminal investigation.

S. Lee Merritt, one of Jones’ attorney, is offering up a slightly different version of the story than Mesquite police are.

“Within 10 seconds of their arrival, [Jones] had been shot it the stomach,” Merritt told WFAA. “While on the street suffering from his wound, officers attempted to perform a cavity search, and he reacted to that and he was shot a second time in this back.”

Merritt, who has classified the cavity search as “an unlawful sodomy” in his own statements, has also pointed out that, in its initial press release about the incident last week, Mesquite police did not include that Jones was the owner of the truck that he was supposedly breaking into.

“That was not a mistake,” Merritt told WFAA. “That was an intentional misrepresentation to the public.”

Last week, Mesquite Police Department public information officer Lt. Brian Parrish appears to have also jumbled some other facts. In a statement in which Parrish heavily implied that Jones was on drugs when police found him, he also said that four officers — not the stated three — were involved in trying to subdue Jones.

“I’m not an expert on human strength, but I think if someone has been shot and handcuffed and on the ground, and it still takes four large men to hold him down, that might indicate there are other factors in place,” Parrish said.

Merritt has also questioned the manner in which his client was detained. Per Merritt, Jones spent six days cuffed to his hospital bed. But no charges were made against Jones until Tuesday, when he was charged with evading arrest. Those charges were dropped the same day.

Six days, ICU, no charges …. chained to the bed while fighting for your life after being shot for no reason at all. #LyndoJones pic.twitter.com/eyaWsR9DEw

Merritt has other questions, too. Yesterday, before Jones left the hospital, he and another local attorney named Justin Moore went on social media with a live stream, revealing that they could not find Jones in the hospital because he was being continuously moved around. He also accused police of questioning Jones without any legal representation present.

During a press conference yesterday, Parrish outright denied that cops were hiding Jones from legal counsel.

“At no point in time did Mr. Jones request an attorney or even implied that he wanted one,” Parrish said. “In that case, we would’ve stopped talking to him and waited for an attorney to arrive. He was more than willing and able to discuss that he had been shot.”

While leaving the hospital last night, Jones said that he was just happy to be heading back to his family.

“I’m feeling good, thankful that I’m alive, living and breathing and [that I] get to home to see my little girls,” he said.

We will update this story as we learn more.