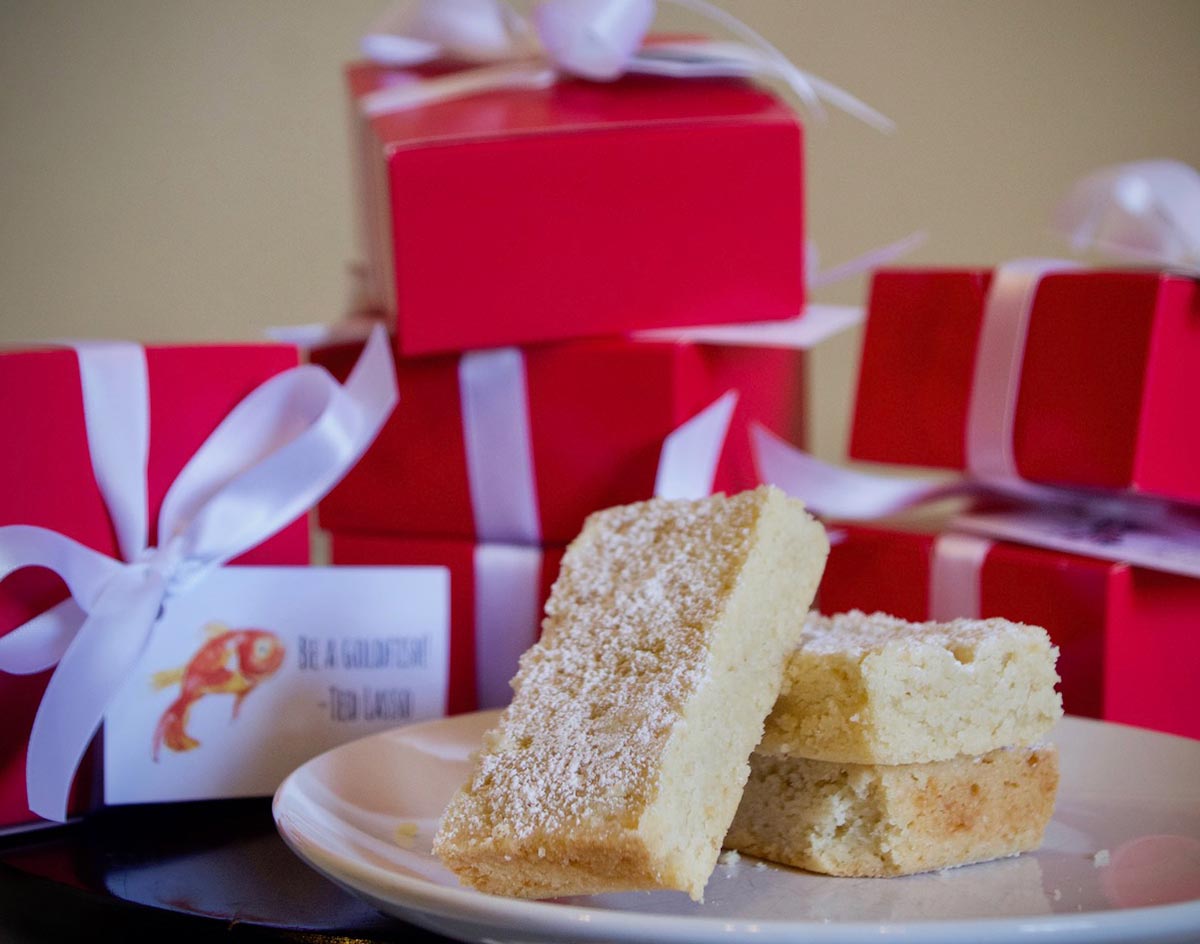 Through Online Orders And Farmers Market Pop-Ups, Lemma’s Bakeshop Is Spreading The Fictional Coach’s Gospel Of Joy And Positivity With Baked Goods.

The comedy series Ted Lasso has garnered quite a dedicated following since it’s release in August of 2020. Led by comedy veteran Jason Sudeikis, the Apple TV+ show tells the story of, well, Ted Lasso — an American football coach who is hired to coach a European football team in England, even though he doesn’t know much about the sport.

It’s a classic fish-out-of-water story — if also a particularly kind and heartwarming one — as Ted utilizes unconventional means to push forward in his new career despite underestimation from his peers and supervisors.

One of the more charming ways Ted gets on his boss and team owner Rebecca’s good side throughout the series is by baking her biscuits — or shortbread-style tea cakes, as we Americans might call them — much to her initial chagrin, but later to her dependency as part of their regular “Biscuits with the Boss” meetings.

In the wake of the show’s success, this biscuit style has become an iconic staple among Ted Lasso fans, and a quick Google search will show you how many recipes have been shared by an array of bakers. 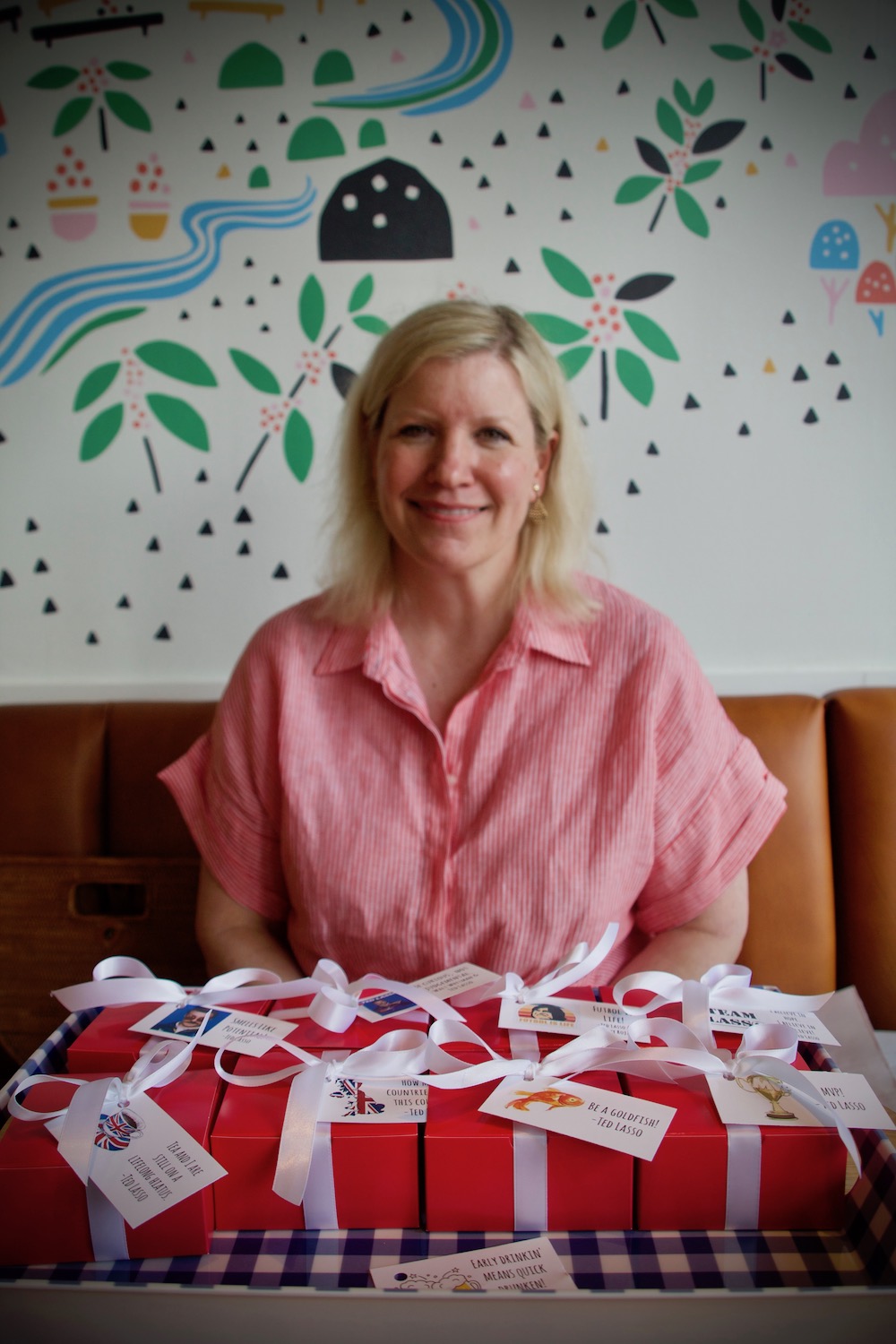 If you’ve been eyeing Ted’s treats but find are somewhat baking-impaired, no worries. There’s a Dallas-based baker who can deliver these rectangles of love right to your doorstep.

Dallas baker and Ted Lasso fan Cathy McEachern is the founder and owner of Lemma’s Bake Shop, a company she named after her grandmother, who sparked her passion for baking. Among the menu of loaf breads, cakes and cookies, she also bakes what she calls “The Ted Lasso Special” — an offering that has quickly become her best-selling item both through online orders and at the farmers markets where she sells her wares.

The hype is real, too: McEachern’s tea cakes super buttery and delicate, like a less-brittle and slightly sweeter shortbread, then topped with powdered sugar. She herself compares them to a lemon-less lemon bar.

While a number of bakers around the country are hopping aboard the Ted Lasso biscuit hype train in advance of the show’s season two release on July 23, McEachern’s actually been serving her version of Lasso-themed tea cakes for months, having first baked a batch to bring to her family’s Easter dinner. She packaged them in a pink box (just as Ted does in the show) and attached a tag featuring one of Ted’s classic and ever-optimistic quotes — “be a goldfish,” for instance — as a sort of inside joke for her loved ones. 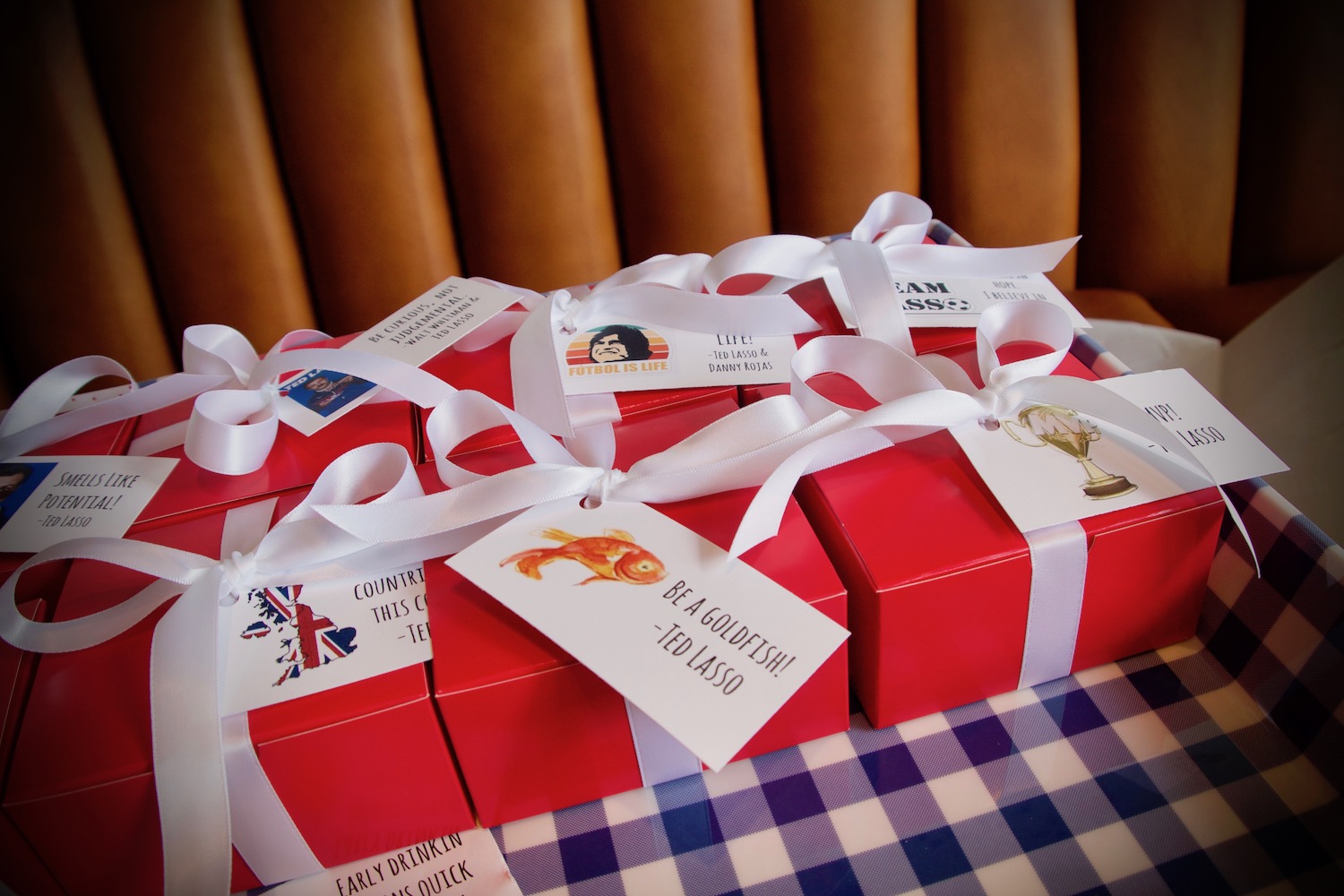 “They ate them all before dinner,” McEachern says. “So I thought, ‘I have something here!’ The next day I took pictures of the tag and posted them to Instagram. It went viral, and I started getting orders like crazy.”

Once she began selling the biscuits, McEachern started incorporating more of the show’s quotes into her packaging, designing a variety of tags so customers can pick whatever Lasso-ism they might’ve needed to hear in that given moment. Some offer inspiration to get through a hard time (“I believe in hope, I believe in believe”), some are just cheeky jokes meant to lift their spirits (“Early drinkin’ means quick drunken”) and others are just solid advice (“Be curious, not judgmental”).

“When I’m at a market, it’s fun to see what people pick,” McEachern says. “What’s your personality? Which one will you pick?” 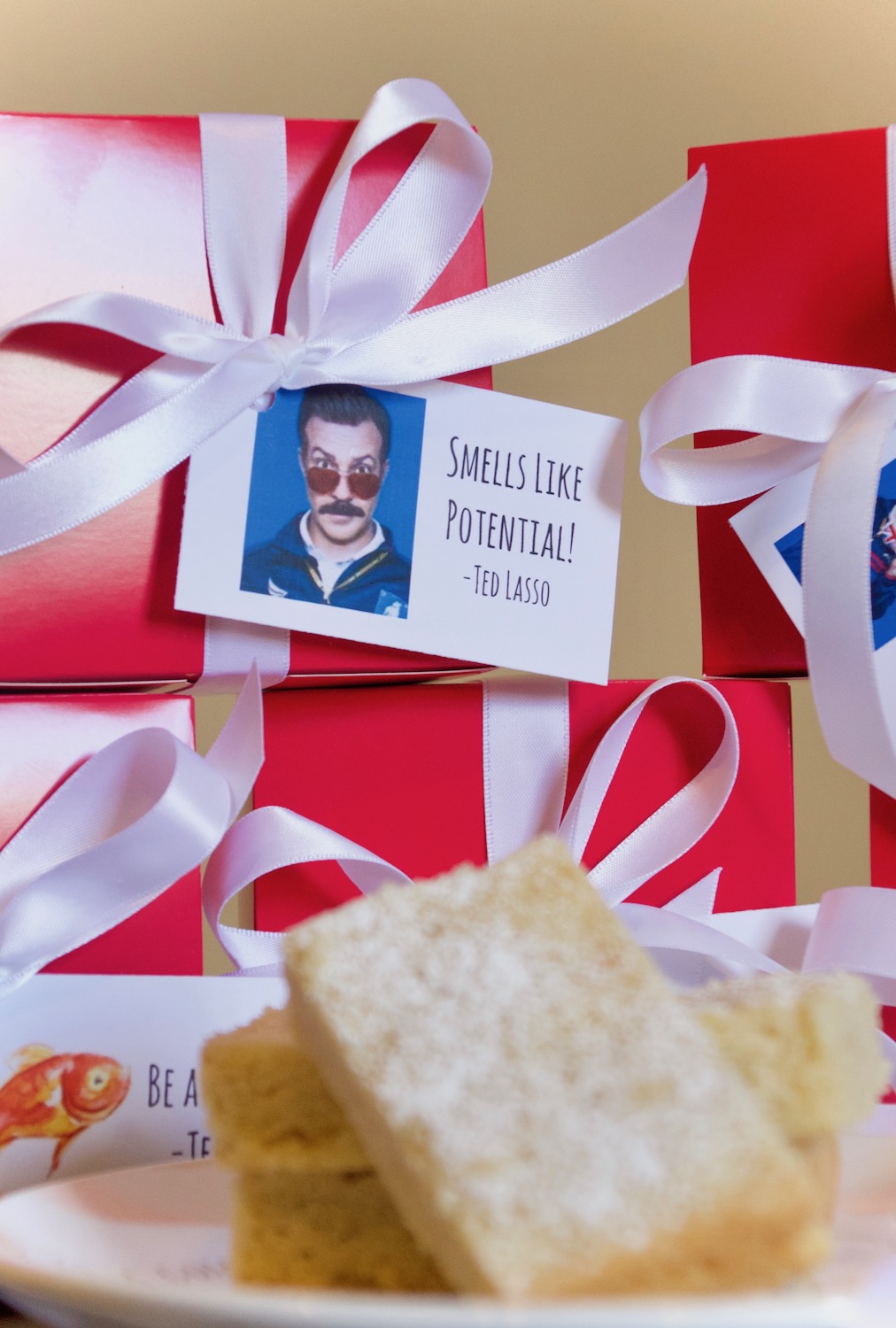 This sort of connection between baker and customer is what makes small businesses like McEachern’s develop value beyond a monetary transaction. There’s a level of intimacy within sharing baked goods and the implied things you say by giving them to someone.

“Whenever you give anybody something homemade, there’s something really personal about it,” the baker says. “You just want to spread a little love and cheer people up a little bit because life is hard enough. [So you] might as well have some fun with it and make everybody a little happier!”

So, what is it exactly about Ted Lasso that has people flocking to both the show and Lemma’s Bakeshop? McEachern chalks it up to relatability and the protagonist’s endless positivity. It helps, she says, that audiences needed something uplifting to binge-watch during a year-and-a-half-long pandemic.

“I think we all felt like, ‘What am I doing? Where do we go from here?'” McEachern says, “And there’s this guy who’s hired to do this job, and they want him to fail. We’ve all felt that way at some point.”

Despite the lack of a support system, though, Sudeikis’ Ted is resilient and keeps his upbeat demeanor in the face of all difficulties.

“He’s very kind, and I think that we all need a little more kindness,” McEachern says.

With the arrival of the show’s second season, McEachern is preparing for an inevitable increase in orders, and even possibly booking some coffee shop pop-up events. You can visit her shop’s website to place an order for pickup or delivery, and to keep tabs on her farmers market appearances. And you catch the new season of Ted Lasso when it begins streaming on Apple TV+ on July 23.

For her part, McEachern says she’ll definitely be watching.

“I’m gonna have a watch party with my friends and my little tea cakes,” she says with excitement. “I’ll be taking notes for some new funny quotes and see what he comes up with for some more inspirational ideas.” 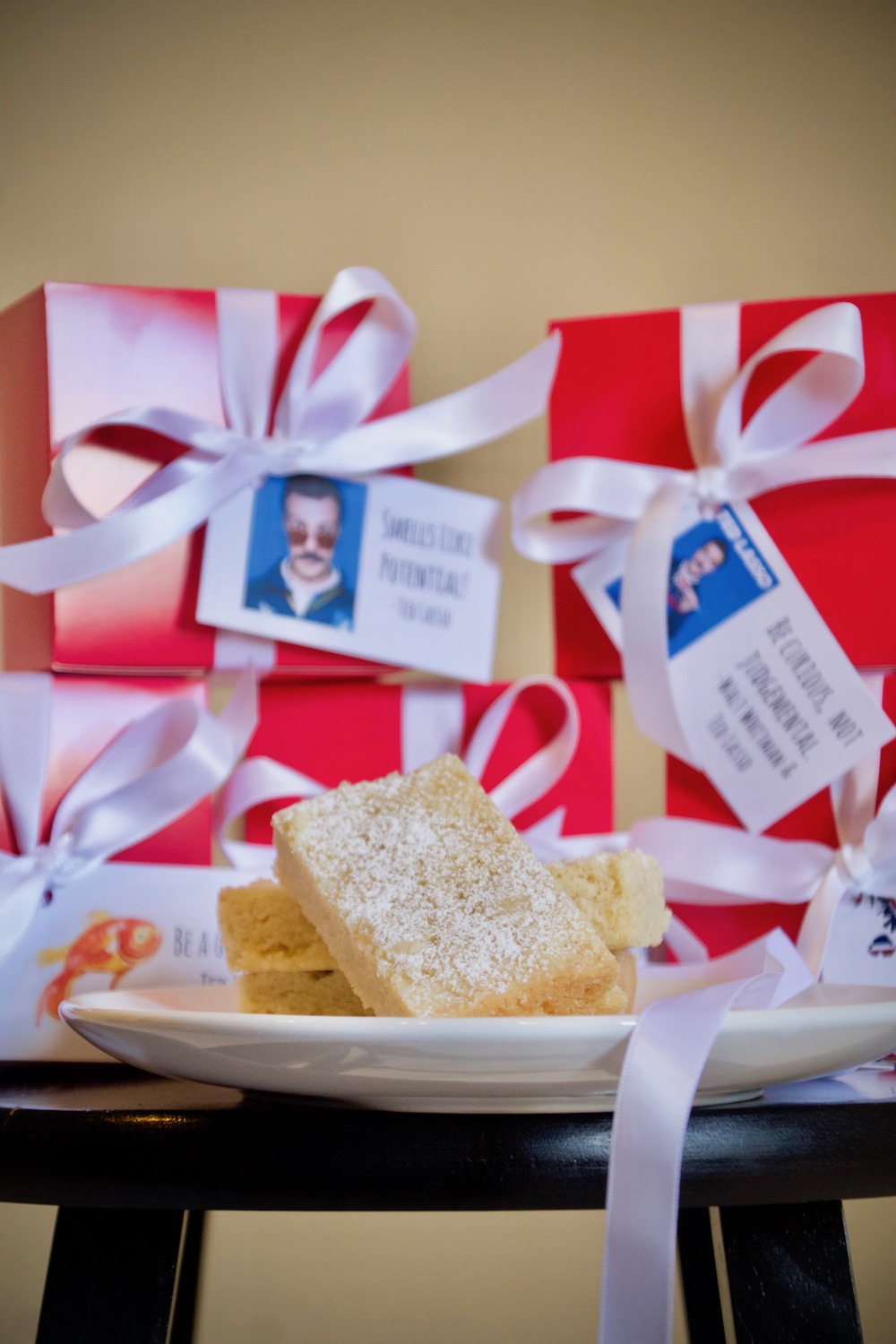