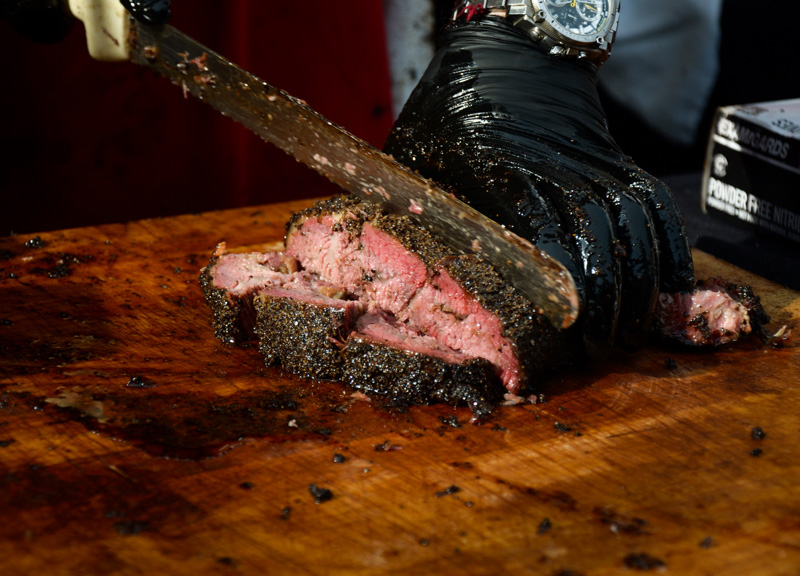 The Sights, Sounds and Meat Sweats of This Weekend’s Smoked Barbecue and Music Festival.

Texans love a good cookout. And you can’t have proper cookout in Texas without great barbecue and fine music — or can you? On some levels, that question was at the very core of Saturday’s third annual Smoked barbecue and music festival in Main Street Garden Park.

By mid-afternoon, that popular festival location in Downtown Dallas was packed with hungry barbecue enthusiasts who were eager to take part in some barbecue tastings and live music.

As the food portion went, there was no shortage of options as a row of tents housing 16 of the best barbecue joints from all over Texas lined the north side of the park. There, pit masters served up bite-sized morsels of smoked perfection to lines of hungry masses, filling the immediate area and its surrounding blocks with the aroma of every kind of barbecue imaginable. The ensuing conversations were almost as delicious as the food, too, as the crowd buzzed with chatter about which spots were their favorite and debates ensured about which vendors had the best ribs or the best brisket.

Some tents — like Lockhart Smokehouse and Heim Barbecue — ran out of stock fairly early as attendees made sure to try their well-regarded fare. Other joints — like CattlAack BBQ, Cousins Bar-B-Q and The Slow Bone — had pretty consistent lines throughout the event. The big hit of the day, though, was Central Texas’ Black’s BBQ, which had the longest line by far, with its queue stretching well out of the food area, and never seeming to get any shorter. Meanwhile, Meat U Anywhere BBQ served a tender brisket with a flavorful smoky bark that had a lot of return costumers, Louie Mueller Barbecue slang a beef rib that was so tender it just fell of the bone and The Slow Bone’s smoked brisket and pimento cheese sandwiches proved a surprise hit. Across the board, the portions weren’t particularly large, but that was for the best, as this allowed for multiple visits to various tents to try everything one vendor had to offer.

Out on the grassy part of the park, festival attendees chose to lounge on blankets in front of the live music stage while munching on barbecue. Vendors in this area sold everything from event merch to turquoise jewelry and vintage boots. Over on back end of the park, a series of field games dubbed the Trailer Park Olympics consisted of such events as toilet seat horseshoes, armadillo racing and mechanical bull riding — all big hits among Smoked’s youngest attendees. And there was more food here too, in the form of elotes and hot dogs.

As for the music, as per the last two years, it paired perfectly with the food, with The Roomsounds, Madison King and Shinyribs kept audiences rapt long past the points at which their appetites for food had been filled. Alas, the day’s headlining band, The Toadies, unfortunately never got the chance to put a bow on things. As their set approached, more and more of the crowd moved in toward the stage — but so too did a thunder storm that was promised to miss the event, but caught it after all. As the rain started to fall, their set was officially canceled, much to the chagrin of the band’s fans out on the field.

Prior to that moment, though, the third annual Smoked had gone off without a hitch, once again proving that Dallas, and Texas in general, is just massively obsessed with barbecue — fully soundtracked or no.