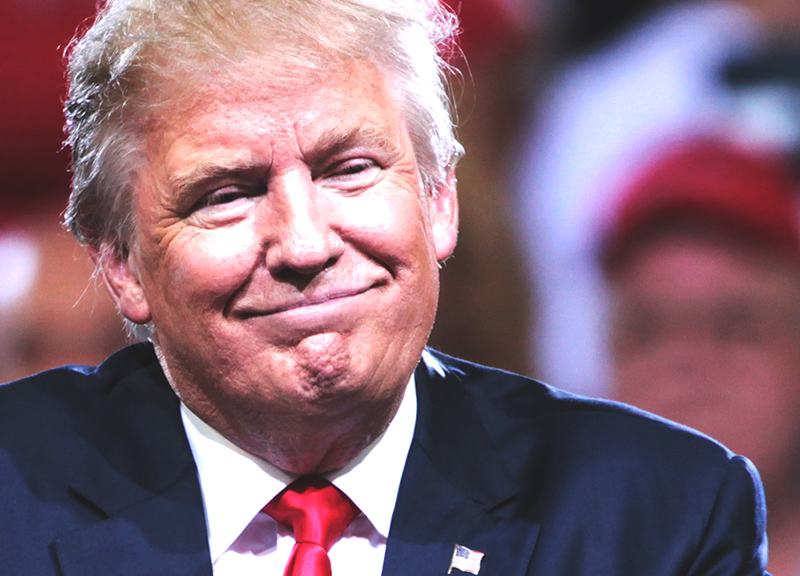 I’m Not A Gay Trump Supporter, I Just Play One On Twitter.

I was drunk and reasonably positive that this was The One That Would Go Viral. Just the right person would stumble across it while searching through the doldrums of Trump jokes on Twitter — like the runt of the litter, oh so cute, so fragile and so deserving of affection — and hit it with an RT.

I was hoping some really hip lady with 500 friends would take on that role, and then maybe her cool DJ friend (DJ Street Shark, in my mind) would fav and RT it too, and then his up-and-coming stand-up comedian friend from New York would see it and fav and retweet it to his 12,000 followers — and so on until I finally get my own sitcom deal on VH1 Classic.

Never in a million years did I think my first real viral tweet would be anything like this.

Here’s some background about myself. My name is Tyler Simpson. I’m a 25-year-old comedian from Dallas. I’ve been doing stand-up for three-and-a-half years now. I will never stop doing it no matter how many times it tries to stop me. I love it and, objectively speaking, I’m pretty good at it. I’m still pretty green — you’re not supposed to get really good until you’re 10 years in, or at least that’s what I’ve heard and also what I keep telling myself — but I’m starting to “get it.” I want myself and my friends to be the best at it (is that too much to ask?). I tweet constantly. My jokes range from pretty great (0 favs) to phenomenal (3 favs, 1 retweet). I’m a liberal sprung from a very conservative family (probably the most conservative considering they don’t vote and leave that decision up to their god, Jehovah).

My girlfriend, my friends, myself and most respectable people that I know believe that Donald Trump is a joke who fell into a vat of radioactive chemicals and turned into a monster who personifies the most vile traits of American culture — racism, sexism, greed, pig-headedness, poor sentence structure, spray-tanning and lame buildings that loom over otherwise beautiful skylines (lookin’ at you, Trump Tower in Chicago). My friends and I all feel like he’s making it more and more embarrassing to be identified as an American citizen. And yet, for all intents and purposes, he’s got a 50-50 shot at becoming President of the United States of America!

My soul just puked a bit.

All that said, it’s been really fun to make of him and his constituency, which brings me back to my tweet, which was pretty innocuous, I thought.

I figured it was silly enough because, first and foremost, I’m not gay, but I’m constantly confused for a homosexual by the public at large. Secondly, it’s ridiculous (at least in my mind at the time) that any member of the LGBTQ community would come within a million light-years of even considering for a second that they would vote for someone who has openly stated that they would consider taking away the freedoms that THEY JUST FUCKING GOT.

In any case, I’m glad that one of my first published pieces involves a paragraph’s worth of me explaining a joke.

Any other night, I think this tweet dies on arrival — and it did at first. I posted it around 10 p.m. on June 11. I went to bed around four hours later, just as the tragedy in Orlando took place.

There were no notifications. I had no awareness of what had taken place. But I woke up the next morning with about 30 notifications from Twitter, which, for a wet-behind-the-ears comedian, is the equivalent of a normal, responsible human refinancing his home or seeing his first-born graduate college. Needless to say, I was psyched.

Then I saw this:

Even a trumpet from across the pond:

To which I proudly responded with this:

Which was followed by maybe a death threat? 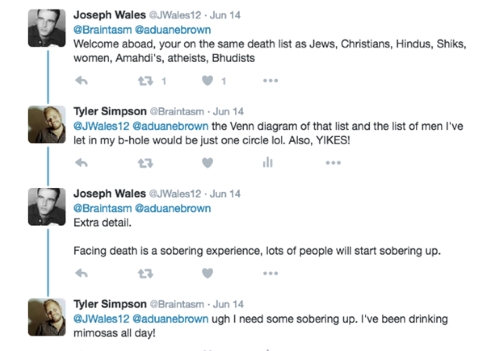 There was even an interview with a HuffPo reporter that went like this:

I got responses from seemingly each and every Trump fan there is, with each one blindly retweeting, favoriting and responding to my tweet with overwhelming support.

I had inadvertently become a gay Trump supporter messiah. Whatever guilt these people felt for their tacit responsibility in perpetuating a society that could let escalating hate and violence continue without any action in the name of their “liberties” were unburdened by my tiny tweet.

There was no context necessary. Nothing else was required. A click on my profile or any other follow-up would soon reveal I was kidding, that I wasn’t real. But, no, I freed hundreds of people from having to look into the mirror; there was no need to reanalyze why they desire unfettered access to automatic weapons, whose only purpose is to kill as many people as quickly as possible. They just saw what I’d written and appropriated it for their own wants and desires.

Clearly, these people don’t care about me.

Many of the responses I received included lines like “as long as you’re American first.” It didn’t matter if I was gay, or Latina or Saddama Bin ISIS. As long as I kept in line and told them what they wanted to hear, I had their support.

You look at how Trump is where he is, and you see a dilation of this. It doesn’t matter how stupid he sounds, how weird he looks, how much he’s lied or how ill-prepared he is. He’s “American first.” He says what these people want to hear. He’s a shitty tweet personified, and he has gone viral.

Cover photo of Donald Trump by Gage Skidmore, via WikiCommons.
No more articles