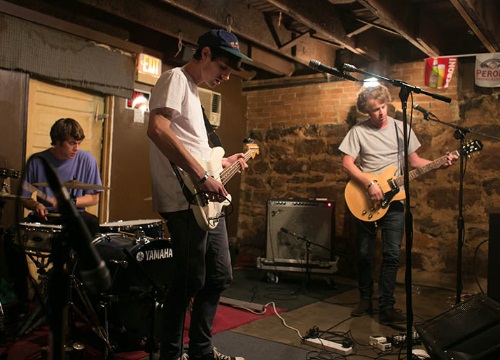 Cinderblock Sessions Are Saved, St. Vincent Is Fashionable and J&J’s Is Taking A Break.

This time last month, the Dallas-based live music sessions series Cinderblock Sessions faced some resistance from the City with efforts to keep its operation going. A couple of sessions were cancelled by the fire marshal, and it was eventually made known that the DIY organization would be required to drop a cool $10K on a parking lot to bring its facility up to code before being allowed to host any more events.

Up until this past weekend and in roughly a month’s time, though, the organization had managed to raise only $4,700 via an online crowd-funding campaign. And so, with that fundraiser set to wrap up tomorrow, the team jumped into Hail Mary mode, going live on Facebook for a 12-hour telethon. The move did the trick, netting the squad an impressive $10,345 total, pushing them past their goal and helping them avoid falling by the cultural wayside.

Somebody else that won’t be falling by the wayside anytime soon is St. Vincent, who will join artists like Courtney Love and Marilyn Manson as one of the faces of Marc Jacobs‘s fall campaign. Writes Jacobs via Instagram: “I am in complete awe of the beauty of this photograph by David Sims for our Fall 2016 ad campaign. It so perfectly captures the inherent contemplativeness of Annie, her humility and mystery.”

ANNIE, Other The idea to ask musician Annie Clark (more commonly known by her stage name, St. Vincent) to be a part of our ad campaign had been discussed long before the Fall 2016 season began. It was Katie Grand who originally brought Annie to my attention and suggested we consider extending an invitation to join this campaign. I was really taken by comments Annie made in an interview with Rolling Stone Magazine where she described queerness as a transcendence of sexuality and as a “banner” for being “other.” It was thoughtful, relevant and poignant. There’s a certain maturity that’s inherent in Annie that transcends her age and while her music is a direct reflection of her intellectual curiosities and musical prowess, it was when I had the privilege of meeting Annie in person that I experienced her magnetism. She operates with such genuine grace, poise and sincerity. I am in complete awe of the beauty of this photograph by David Sims for our Fall 2016 ad campaign. It so perfectly captures the inherent contemplativeness of Annie, her humility and mystery.

Of course, St. Vincent is no stranger to the fashion world. You might recall, she debuted some new tunes during Diane von Furstenberg‘s 40th anniversary fashion show during New York’s Fashion Week in 2014.

Exciting things! And even more exciting things are in store for the newly formed Austin/Dallas promotions company Margin Walker. After splitting with Transmission last month and leaving behind the branding rights to Fun Fun Fun Fest, the entity responsible for booking that annual fall affair has announced its own new and exciting fest called Sound on Sound (named for a song from the Austin-based ’80s punk band, Big Boys). Says the Austin Chroniclewhich has all the lowdown on the fest, you should expect “everything you loved about Fun Fun Fun Fest — with a different name.” The inaugural, three-day event goes down the November 4 weekend. The lineup will be announced a week from today, when tickets will also go on sale.

Speaking of tickets: Preston Jones over at the Fort Worth Star-Telegram has the details on the shows that Ticketmaster will be giving away free passes to as part of its $400 million class action lawsuit settlement. If you bought tickets through the ticketing agency to a show between 1999 and 2013, you can log into your online Ticketmaster account and see if you’ve earned passes through the settlement to any number of Gexa Energy Pavilion-hosted shows slated for this summer.

One place you won’t be seeing any shows come August 13, though, is at J&J’s Pizza up in Denton — at least not for a few months. In a story that probably over-exaggerated the severity of the news some, the Dallas Observer reports that the pizza shop basement where shows are often held will be closed for a few months of renovations. After some updates, the shows will return.

Before that even comes to pass, a local hip-hop icon will get her due. Earlier this week, VH1 announced that Salt-N-Pepa, along with Dalals resident DJ Spinderella, will be saluted at its next Hip-Hop Honors when the event ends its six-year hiatus and broadcasts live from New York on July 9. Also performing at the ladies-only ceremony will be past honorees Queen Latifah and Missy Elliott.

Meanwhile, The Dividends prep for its first-ever headlining performance at Trees this Friday by premiering a new track from the cassette/USB-only debut album that’ll also be released at that show. Says EARMILK, which premiered the song “People” earlier today: “It’s a beautifully crafted track and really shows the diversity in the Dividends, [spotlighting] [Sarah] Jaffe‘s strong vocals and songwriting and S1‘s impeccable production and inventive instrumentation.”

Moving on, former Dallas Cowboys great and reigning Super Bowl champion linebacker DeMarcus Ware reunited his old high school R&B group Mirage for a Denver Broncos charity event. Below is some TMZ video of the outfit performing “Purple Rain,” with Ware serving as one of the group’s vocalists. Keep your eyes peeled, and you might also catch Dallas guitar hero Robbie Saunders (of The Venetian Sailors and about 50 other groups) holding down the pedal steel. Speaking of young R&B groups: A trio of students from Colleyville’s Barack Obama Middle School was recently awarded scholarships and a mentoring trip to meet a handful of Grammy-winning singers, songwriters and producers after their original song “Let Me Believe” won Constituting America‘s “We the Future” contest. Check out the winning entry below.

Yup, there’s lots of bright young musical minds in this city. And there’s finally some good options at helping mold them. In addition to the many School of Rock locations and Antonio Hall‘s soon-to-open 2 The Beat hip-hop school in McKinney, DJ Jay*Clipp‘s new Keep Spinning DJ Academy is teaching Dallas youth the art of turntablism in The Cedars. Check out an ad for the after-school program below.

In video news this week, Fat Pimp draws heavily on imagery from his favorite flick The Godfather in his new, throwback gangster video for “Young Finesser.” Stream it below.

Finally, a few quick-hitters: Little Beards‘ debut album is set to release sometime this fall via Pour le Corps Records; Vancouver electronic outfit Bear Mountain will release a new LP named after Erykah Badu on September 9; and Parallel Play will play its last-ever show on August 20 at the Granada.