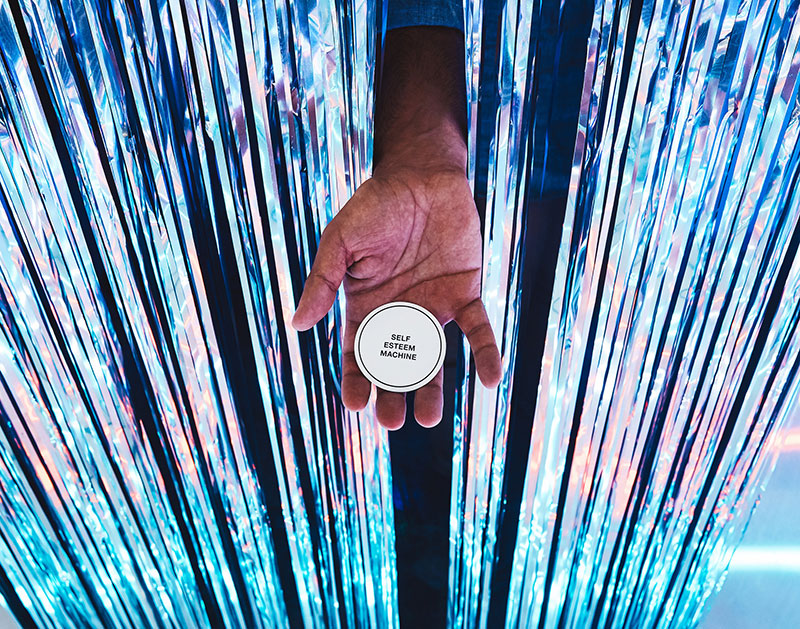 With The Help Of Dallas Artist Hal Samples, Fragrance Company LUSH Is Telling Stories Through Scents At Its Installation-Filled Week-Long Dallas Pop-Up.

The bath bomb craze has been dominating the world of hygiene recently, popping up in the Snapchats of celebrities and Average Joes alike. And while LUSH Cosmetics has developed a reputation as a go-to source for some of the bubbliest and most fragrant bathing products around, it turns out there’s more to the company than just great-smelling soaps.

Herbal trichologist Mark Constantine founded the company alongside his wife Mo and beautician Elizabeth Weir in the mid-’90s with the goal of providing organic, handmade, cruelty-free bathing products with purpose. And, over the course of the past two decades, the UK company has indeed hosted an insane amount of campaigns and fundraisers, donating millions to a wide range of organizations.

In addition to its humanitarian focus, LUSH has also made waves by creating art through smell. Its Gorilla Perfume line created by Constantine and his son Simon is meant to tell stories, provoke thought and inspire emotion. And this week in Deep Ellum, that directive is on full display in the form of a traveling scent gallery.

Located at 2550 Elm Street right next to Prophet Bar, the final stop of LUSH’s Gorilla Perfumes Volume IV Gallery Tour — its first-ever in America — has a decidedly Dallas bent. Its 14 fragrances and installations were inspired by the Simon Constantine’s experiences while traveling the world and also by the life’s work of Dallas artist Hal Samples.

After spending the better part of the last decade working on a documentary about a homeless Angeleno named Tachowa Covington only to see the revered artist Banksy turn that effort on its head, Samples has become an artist-in-residence under LUSH’s employ, which has developed a mutually beneficial relationship for the artist wherein he helps inspire the company’s fragrances and they company helps fun Samples’ artistic visions. That partnership becomes clear during a tour of the Gorilla Gallery, with a large portion of the tour is based off Samples ongoing documentary film work that aims to give voices and visibility to the world’s homeless populations.

More than just thought-provoking, the exhibit’s use of scent is clever. Each installation is centered around an immersive visual concept and an associated scent: A 1970s living room is paired with a scent inspired by Samples’ memories of visits to his grandmother’s house; a replication of the water tank that Covington lived in before Banksy made it famous is matched with a fragrance that combines metal and dirt smells. Filled with interactive props and an elaborate maze of multimedia components, visitors are submerged into a narrative that touches all five senses as it describes both Samples’ journey and LUSH’s.

Open now through Sunday, 11 a.m. through 7 p.m. (8 p.m. on Friday and Saturday), fans of the brand and art can visit the gallery and receive guided tours and behind-the-scenes insight on the scents from Samples. Additionally as part of the tour, Samples will also be screening episodes of his Samples of Society documentary series over the course of the week, with a premiere of the debut episode being shown at 7 p.m. on Thursday, October 26, at the newly opened Museum of Street Culture at 508 Park. The tour will also host a number of concerts of the weekend: On Friday, October 27, the gallery will host a Cure for Paranoia set at 8:45 p.m.; on Saturday, October 28, it will host a performance from Samples’ own Iamesh Malkovich & The Secret Collective at 8:30 p.m.; and at 2 p.m. on Sunday, October 29, it will host a performance from the Dallas Street Choir, fresh off its Carnegie Hall gig. For more information, head here.