Loving Vincent Is One Hell Of A (Literal) Motion Picture. 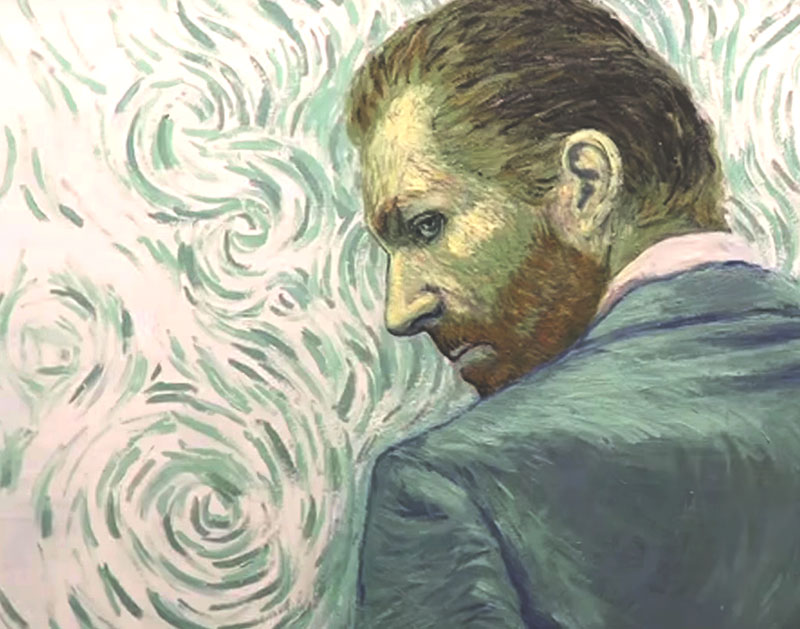 Reverentially Animated In His Iconic Painting Style, Loving Vincent Is An Intriguing And Insightful Look Into The Tragic Vincent Van Gogh.

You don’t have to be a sophisticated art connoisseur to know the works of Vincent Van Gogh.

More than 100 years after his death, his paintings — huge draws for the museums that house them — are inescapable, adorning everything from tote bags to fridge magnets.

But this, of course, wasn’t the case during the artist’s life. Plagued by mental illnesses that were never diagnosed, and supported financially by his younger brother, Van Gogh only sold one painting in his lifetime.

It’s this story that writer-director tandem Dorota Kobiela and Hugh Welchman looks to tell with their new animated feature, Loving Vincent. And, in the process, they par homage to the icon in a most unique way.

The film follows the story of Armand Roulin (Douglas Booth), son of postman and famous Van Gogh subject Joseph Roulin (Chris O’Dowd), as he attempts to deliver Vincent’s (Robert Gulaczyk) final letter to his brother Theo (Cezary Lukaszewicz). Through his journey, Armand comes to find that a man he once thought an eccentric nut job was actually a complex man — and he begins to question whether Vincent’s death was actually the result of suicide, as had been reported. Over the course of his journey, Armand interviews numerous Vincent painting subjects, each one with a story that shows the layers hidden beneath the painter’s surface. What follows is a Citizen Kane-esque quest to better understand a person whose impact on those he met was enormous.

Indeed, this film is far more than what its first half implies it is — a simple biopic as told through Vincent’s acquaintances. As the second half unfolds and Armand tries to search to find whether Vincent was murdered or if he was suicidal, Loving Vincent becomes an exploration of the futility of distilling a person’s life into a neat box.

Visually, the film is stunning. Inspired by the artist’s unique aesthetic, directors commissioned 100 oil painters to animate the movie. This painstakingly slow approach made the movie a six-year-long effort, giving a whole other meaning to the title. But the effort was worthwhile, as the visuals give Loving Vincent a sort of vintage rotoscoped effect that is as dreamy as it is trippy. Seeing Van Gogh’s beautiful paintings come to life is a moving experience, too. On one hand, there’s the cognitive dissonance of seeing people in the Cafe Terrace that weren’t in the painting. On the other, there’s the thrill of seeing a world as Van Gogh perceived it. More than that, this style of animation is truly astounding, as there’s not a second of the movie where neither the characters nor the background are static. Clouds move, water drips, birds chirp and, as if to mimic real life, the characters pay no attention to their surroundings. And, while the film’s present shows a colorful world, when it flash back to the past, the animation seamless switches to a black-and-white palette that mimics Van Gogh’s earlier paintings.

The actors, who filmed their portions first and were later animated, should also be lauded for their great performances, which are in lockstep with the emotion of Van Gogh’s paintings.

It all adds up to a true treat for any Van Gogh fans, an effort filled with subjects from Vincent’s paintings come to life, and with reverence at that. Even audiences that aren’t super familiar with the artist’s work, will be drawn in by the care with which this film was created.

Loving Vincent is one of the most heartfelt tributes to an artist even put on film. While its subject’s life may have been marred in tragedy, this presentation of that story should serve as inspiration and comfort to the millions who’ve seen his work.