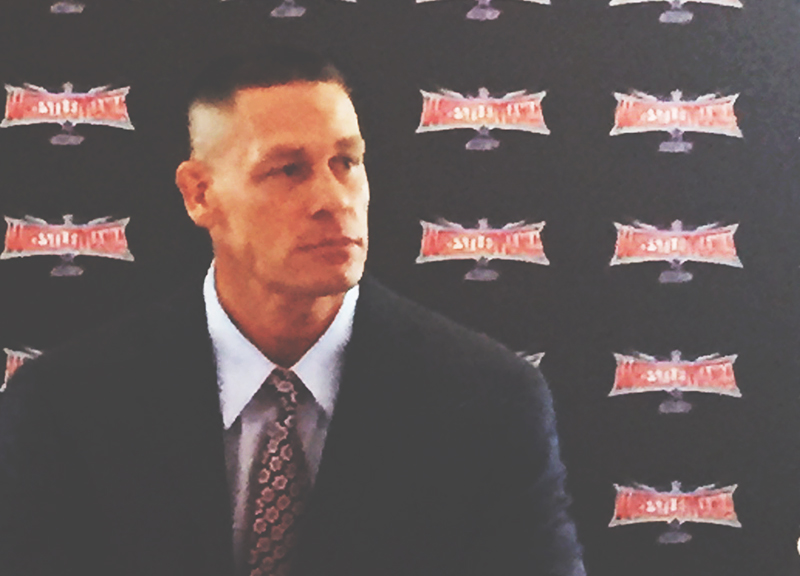 My Experience At My First-Ever Pro Wrestling Media Event Was Kinda Weird!

“He just missed an opportunity to plug his new reality show.”

This is what I overheard from a journalist, spoken as an aside to John Cena’s assigned handler, at the WWE WrestleMania media event at Reunion Tower on Friday morning. It was in regards to a question that journalist had just asked.

Was it meant as a prompt for Cena to open up about his new reality show? Is there something to Cena’s not inserting a plug for the show? I don’t actually think this was some nefarious collusion between the WWE and a journalist, by the way. But at something as predictable as a press conference, minor elisions just seem downright scandalous.

In the no-holds-barred bout between the professionalism of a media event and the surrealism of a press conference for wrestling, professionalism won handily. The conference drew a mix of media outlets from general news, sports and wrestling-oriented entities. It’s easy to separate the genuine wrestling fans from the people on assignment, because the wrestling fans are happy to provide almost all of the questions. You can occasionally hear a giddiness that seeps into their voices when they talk.

No one here was particularly interested in keeping up a pretense that wrestling is real, which made the whole affair less fun, but significantly less awkward. Legendary wrestler Chris Jericho put it succinctly: “[Wrestling is] a show… The same way you’d talk to an actor, you talk to a wrestler.”

Meanwhile, Stephanie McMahon quickly flitted between the show and reality when talking about the return of her brother, Shane McMahon, to the roster — she’s happy to have him around again, but her character obviously isn’t — and she also said that, yes, she gets nervous watching her brother perform the insane stunts he likes to attempt in matches.

We’ve already parsed out the most salient bits of information that came up during the conference — and that information is well worth a perusal. Those are the carrots in the carrot-and-stick dynamic of a press event, with the stick being the promotional soundbites that WWE wants conveyed. How do wrestlers feel about WrestleMania? They seem to be pretty into it, as it turns out!

But there are some other observations worth noting. For instance, Stephanie McMahon has incredible poise. She could take questions while being the target in a carnival knife-throwing act and still not miss a beat. She can drop a line like “available live on the WWE Network” when talking about NXT in a way that somehow sounds organic in the moment. Forgetting the wrestling and entertainment connections, it occurred to me during her session how rare it is to be around someone who’s just hyper-competent. She helps run an international company, performs weekly on television and has a family. Then she has the audacity to stay in excellent shape. She also has assistants. But, even so, I’m intimidated by the thought that someone can do even half of what she does and not be a shambling, sleep-addled wreck who takes caffeine through an IV drip.

Roman Reigns, on the other hand, is shockingly charismatic off-screen — and in a way that probably does need to be massaged for television. To be clear: This is in no way an endorsement of how his character has been packaged over the last year or so. In person, he’s assured, somewhat soft-spoken and comfortable making jokes, but he lacks the sort of verve that could help him really project his personality on a large stage. He’s also so handsome in person that you can’t even be bitter about it.

John Cena, meanwhile, is tough to read. He has this clipped way of responding to questions, and there’s no mistaking when he isn’t fond of what he’s been asked. I assumed he just didn’t want to be there, but then he cajoled everyone for questions, and blew through his 10-minute time limit like it was a straw house. My best guess is that he genuinely enjoys having a back-and-forth with people, and likes to be combative. He’s like that intimidating friend who “loves to debate.’

I’m still mad at myself for not pressing him for more answers on this.

In all, the stakes at a press event are low, and surprises are rare. Of course the star of a new movie is excited for its release. Obviously an athlete is optimistic about the outcome of a big game. To hear someone slip up would be titillating, but it wouldn’t have much of an impact, beyond embarrassing the person who made the slip (and probably ensuring that they stop speaking with the media).The best you can typically hope for is a “Sad Affleck” meme or John Cena forgetting-or-maybe-not-forgetting to plug his reality show when the opportunity comes up.

Of course, we tend to be captivated enough by the charisma of those people who perform for us that a conversation devoid of surprises can still keep us hooked and cause us to do things like over-analyze the potential connections between John Cena’s politics and his tastes in films.

Seriously, though: Do you think he likes Dr. Strangelove? Or is Full Metal Jacket his only foray into the Kubrick filmography? I’ll let you know after the next press conference.