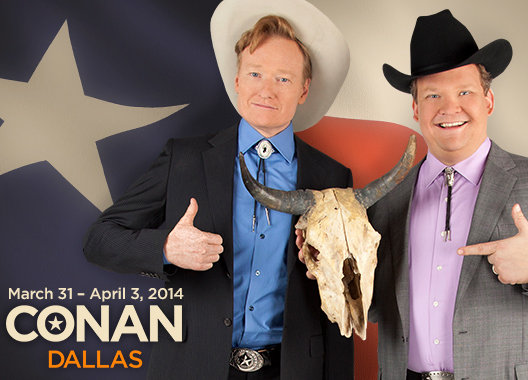 Conan O’Brien To Tape A Week’s Worth of Shows at The Majestic in Late March, Early April.

Southern Methodist University’s men’s basketball team may currently sit at No. 23 in the AP polls, but let’s face it: North Texas isn’t exactly a college town when it comes to sports. Still, make no mistake, the fact that the 2014 NCAA Men’s Final Four is going down in Arlington this year is quite the big deal.

For instance? Last month, we told you that the NCAA would be hosting a free-to-attend, three-night concert series in Dallas at the old Reunion Arena location — an annual affair that last year featured performances from Muse, Macklemore & Ryan Lewis, Ludacris and Flo Rida.

And now there’s this: Yesterday afternoon, the Dallas Film Commission announced that Final Four broadcasting partner TBS will be sending Conan O’Brien to town for a week’s worth of Conan tapings at the Majestic Theatre from March 31 through April 3. The run marks the second straight year in which TBS has sent O’Brien to tape a run of shows at the Final Four’s host location. Last year, Conan taped a week of shows from Atlanta.

Tickets for the 2014 tapings in Dallas will be free and handed out on a first-to-request basis, starting this Tuesday, February 18, on Conan‘s site, right here.

Update at 1 p.m. on February 18: The ticket request site is now live. Head here, like right now, to request up to four tickets for you and your friends to see Conan. At the moment, all four days in town appear to have available seats.

This coup, we should also note, marks yet another massive score for the Majestic Theatre in 2014. Now under the run of former Old 97’s and Granada Theater manager Mike Schwedler, the Majestic’s 2014 calendar features a rather remarkable slate of shows in the coming months, including comedy sets from Jim Jeffries (March 8), Kids in the Hall (April 27) and Eddie Izzard (June 24 and 25), and concerts from Neutral Milk Hotel (tonight), Pet Shop Boys (April 15) and Morrissey (May 22), among others.