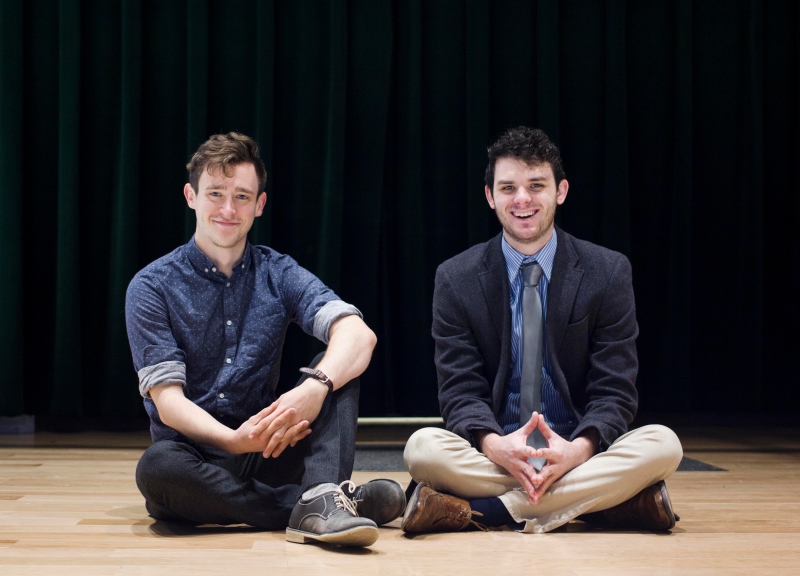 Stu Hollowell and Shane Silagi’s LoL Nonprofit Is Helping Denton, One Dick Joke At A Time.

They had each spent less than three years doing comedy, but Stu Hollowell and Shane Silagi decided to pull the trigger on a pretty grand ambition. At the beginning of the year, they created a nonprofit group that would use comedy as its fundraising vehicle. Enter Language of Laughter (abbreviated as LoL, for what really ought to be an obvious reason).

Using comedy as a means of fundraising isn’t new to DFW, but they brought in a clarity of purpose — to raise money for underprivileged schools, and students — and a remarkable consistency. They’re still working on their 501(c)(3), but they’ve already become a recognized nonprofit group by the state of Texas.

LoL is concentrated in Denton, and it’s been a boon for comics, and local students. They’re also helping connect Denton comics to their community by using them to help with the writing workshops and story time events they’ve been hosting.

This weekend, they’ll both be part of the inaugural Denton Comedy Fest, which runs from Thursday through Saturday. Sustaining a comedy festival places a lot of demand on a local comedy scene. Just sustaining enough of a comedy scene to claim your town has a “comedy scene” is daunting enough by itself. The festival is showcasing a diverse lineup of talent from Denton and other parts of DFW, and includes some national acts — the final show is being headlined by Shane Mauss, who’s been featured on Comedy Central, and made several appearances on Conan.

In the course of our chat, they shared their goals for LoL, and their thoughts on Denton’s burgeoning comedy scene.

So let’s talk about LoL. When did that start?
Stu: The idea for it really started late last year, around November. We knew we really wanted to do something for the community, and the closest thing we could think to do was a comedy show that benefitted Toys for Tots. And after that we decided to make it a real thing, a regular thing, and do paperwork. [Laughs.]

So you’ve made this official. You have your 501(c)(3), is that correct?
Stu: That’s being reviewed right now, but we are an official Texas State Nonprofit. We had to wait until we saved up a certain amount of money to apply for 501(c)(3), because it costs money to be a charity, which is asinine. [Laughs.]

So what’s it been like, taking on something like that?
Shane: Really rewarding. I got my associate [degree] in teaching, and I really wanted to help in education. But I didn’t want to teach. [Laughs.] Most of that is because the funding for a lot of school stuff — classes get cut because schools can’t afford them. I wanted to find a way to bring money to programs, or bring money to underprivileged students, to better their education.
Stu: Without actually being a teacher.
Shane: Yes. [Laughs.] And while telling dick jokes.

Does it feel different doing a charity show versus a standard comedy show?
Shane: It does for us, because we mostly host the shows. We don’t really do our standup bits.
Stu: We’re sort of the facilitators [of the nonprofit shows]. It is different, but it’s almost better that it’s different. We feel like we’re benefiting the community, and our fellow comedians. And everybody sort of wins out.

Do you ever feel like you’re getting the short end of the stick in this exchange? You’re pursuing the nonprofit, but you’re also trying to make it in stand-up.
Stu: I feel like we didn’t start this to reach for sticks. I mean, I’ll take the short ones or the long ones, I’m just happy…
Shane: We’re just happy to hold sticks. [Laughs.]
Stu: It’s nice being able to, like I said, give of ourselves while doing what we love. There’s no downside to it.

Are you involved in it beyond performing?
Stu: A few volunteers from our nonprofit are helping out with the facilitating of the festival, but other than that, we’re just performing, which is nice.

Is it nice to be able to get away from that official role occasionally, and just be comics?
Both: Yes.
Shane: It’s a totally different part of the brain that we flex.
Stu: I think so, too. I’ve had audience members come up and tell me that I seem totally different when I’m not hosting. It’s like they’re seeing a different comedian. Mainly because it’s a very different job, and not a lot of people recognize that.
Shane: It’s mostly just Stu and I shitting on each other.

So we get to see the heads of the nonprofit fight onstage?
Stu: Pretty much, yeah.

So what are your thoughts on the Denton Comedy Festival?
Shane: I think it’s good that it’s happening. It’s the first one, officially. I’m excited to see what happens.
Stu: It’s nice that Denton is sort of receiving some validation for what it is, and what it’s become, because it’s had such heart for so long. It almost feels like an “It’s about time” moment, but I realize it’s something we still have to work towards, improving the community and the scene. Denton is a great town. I’m glad it’s got something like this coming up.

How would you describe the current comedy scene in Denton?
Stu: DIY. Tonight, I have a showcase in someone’s apartment, and my last showcase was in a gas station.
Shane: Convenience store.
Stu: Yes, convenience store.

How has the scene changed since you’ve started performing?
Stu: There’s been a lot more show running going on, and that’s where the DIY thing comes in. We don’t have clubs here, so our open mics have always been in coffee shops, and our shows are wherever we can figure out where to put them on. It’s definitely hipster comedy.
Shane: I think it’s always been sort of an up-and-down rollercoaster. When I first started, I was kind of getting in on the peak with the Denton Comedy Collective. Ron Lechler [who helped run the Denton Comedy Collective, and currently resides in LA] had kind of ushered me in with it. He left. I don’t even know what happened with Denton Comedy Collective. They’re actually making a comeback right now, but they went away for a while, and comedy kind of died in Denton.
Stu: I feel like comedy [in Denton] just ebbs and flows, but it’s ebbing and flowing in a good way now.

Do you feel like Denton is part of the DFW standup scene, or something apart?
Stu: It’s a stepchild of the DFW comedy scene.
Shane: Yeah. It’s kind of like a cousin you don’t really want at the family reunion, but he’s there.
Stu: But you have to recognize that he’s family.

So you feel like outsiders?
Stu: Yeah.
Shane: Sometimes.
Stu: Like I said, I feel like Denton doesn’t get the recognition in comedy that it deserves, because it has such great heart. And that’s why we’re so excited for the festival. It’s a staging ground for, hopefully, more to come later.
Shane: A lot of people from DFW…
Stu: A lot of DFW comics are coming up to perform in the fest.

Do you feel like there are any drawbacks to being in Denton versus Dallas or Fort Worth?
Shane: No. Everything is close enough together, we can drive to Dallas, or Arlington, or Fort Worth.
Stu: When you want to do mics in DFW from Denton, you can. And that’s nice. It’s also nice that Denton’s got its own homegrown vibe, comedy-wise. It’s almost like the best of both worlds, in my mind.

Do you feel like you have to change your style when you go somewhere in Dallas versus in Denton?
Stu: It depends on the venue.
Shane: And how many people are at that venue.
Stu: If it’s just one bartender at the club? Nah. If it’s a bunch of sad businessmen? Yes. [Laughs.]

So what’s coming up in the future for LoL?
Stu: We’re putting on more and more kids’ events, which is cool, because of Nick Fields and Javoris James [both Denton comics], they’re super excited to do story time. I love what we’re doing because it gives comedians access to another side of the community that they don’t usually see. And people on that side of the community don’t really see the comedians. It’s a cool way to blend both parts of what I do.

So you have story time?
Stu: Yeah. The main part of the education side of the nonprofit is to promote literacy, so we do story time, we do writing workshops, things like that, for underprivileged students.

So long-term — a year, five years — where do you see LoL?
Shane: We’ll have our 501(c)(3) hopefully. [Laughs.] I think the long-term goal for me would be to have one comedian we showcase on an LoL really hit their big break. Or draw in some professional comedians to the scene. We’d help the [comedy] community in that way, so that other comedians can meet and talk with these professionals, and learn how they do in this industry. But I’d also love to see a comic who performs with us do something big.
Stu: I guess in five years I hope it grows in that way that it’s continued to. It’s been a welcomed addition to the other comedy voices happening here and elsewhere, and I hope that just continues. I hope everyone benefits from it.
Shane: That’s the comedy side I hope to see in five years. On the education side, I hope to see…
Stu: A statistical change. We’re tracking numbers, and we hope to, in some small way, improve the community in terms of access to educational resources.

So let’s switch LoL for the Denton comedy scene, where do you see that in a year? Five years?
Stu: Hopefully it stays DIY. I love that about this. I just hope it stays as unique as it is. I hope it doesn’t feel pressured to assimilate into the larger DFW scene, but rather embraces its stepchild role.

So let’s say I’m a comic from Dallas who never goes to Denton. Give me your pitch. Why should I drive up here to do comedy?
Shane: I think the best reason is the audience. Because it is a college town, because it’s a pretty small college town…
Stu: We have two colleges here. It’s a pretty big college town. [Laughs.]
Shane: We got two. And a community college that’s pretty close. [Laughs.] But there’s always an audience.
Stu: I think the kindness of the comedians that I’ve interacted with in this scene is something you want to be a part of. We all help each other out with shows, and we all really care about the quality of the comedy here. It’s a fun scene to be part of.

Stu Hollowell and Shane Silagi perform at this weekend’s inaugural Denton Comedy Festival. Find out more about that here.