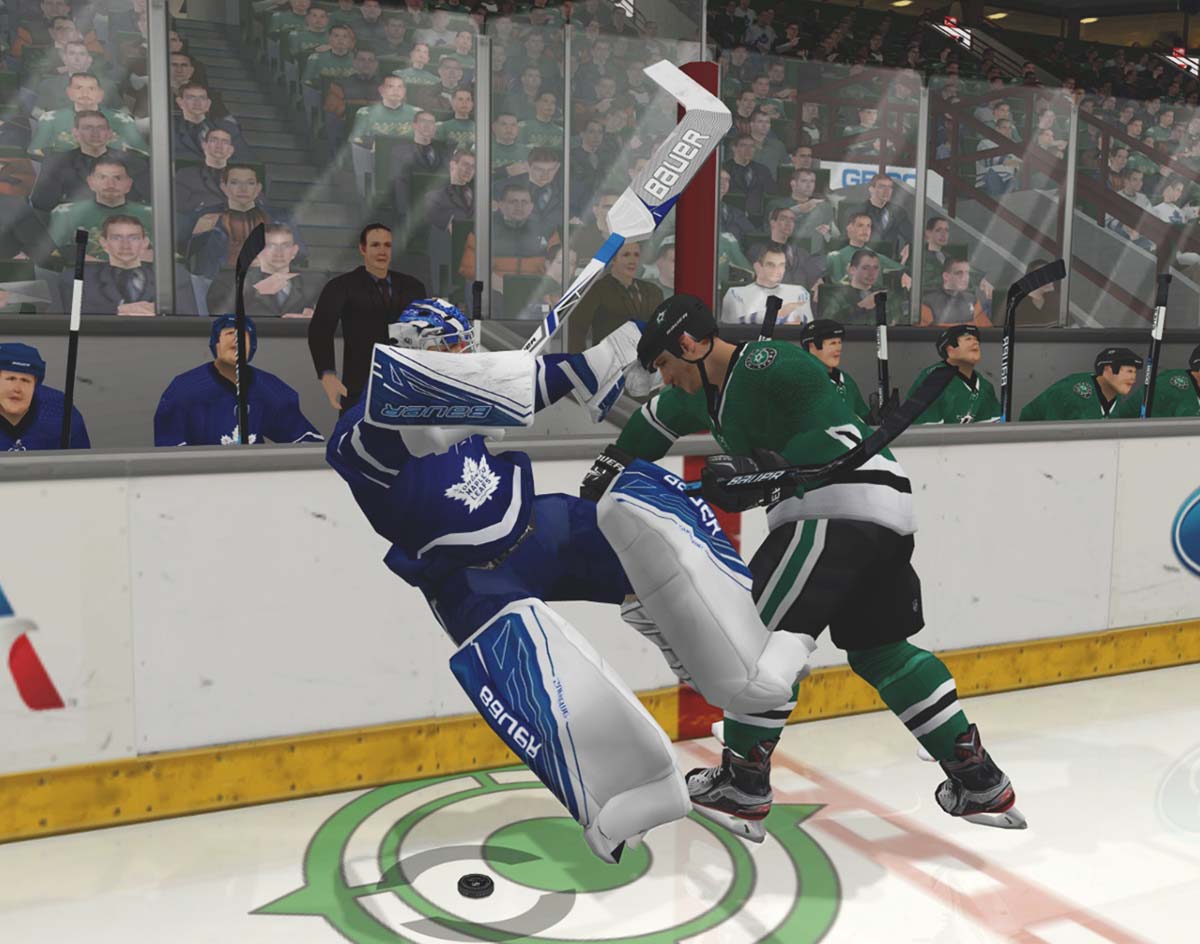 Your Dallas Stars have completed the first week of the 2018-2019 NHL season and reminded us all that fun hockey is fun indeed!

But fun hockey can also be a bit heartbreaking 🙁

See, new Stars coach Jim Montgomery’s relentless game plan is a joy to watch and a pain to defend if you are the opposition, but it’s clear already that there’s plenty the Stars need to work on if this season isn’t to be a bust. The glaring issues so far? A passive PK and — stop me if you’ve heard this before — a lack of secondary scoring.

Still, there’s much to like with this squad as Your Dallas Stars managed to pull four out of six points in Week One.

• Victory Green™ vs. Arizona Coyotes, 3-0.
The NHL unknowingly did it’s best to schedule the most cream puff team possible for the Stars’ home opener, and Jamie Benn and the bois certainly took advantage of it. In front of a raucous sell-out crowd, Ben Bishop blanked the ‘yotes with the help of his posts and a three-goal Stars outburst in the second period. The flood gates opened for Dallas after a point shot rebounded itself to Devin Shore, who managed to kick the puck from his skate to his stick for the put-back. Dallas wasted no time in extending the lead after that as Jeff K’s goal announcement was politely interrupted by a breaking Alexander Radulov, who shoveled a backhand through the five-hole of Antti Raanta. Not one to let all the forwards have all the fun, John Klingberg then raced down the wing on a 4-on-4 to fire a wrister blocker side high to give Dallas a three-goal leader where they’d been scorelessly tied just 1:36 prior. Mighty impressive! Jamie Benn picked up two assists in the game, but his physical presence was what energized the team and the building after a purposeful knee-on-knee collision awoke the beast within the captain. Said Benn of his performance: “I definitely enjoyed what I was doing out there tonight.” The win earns coach Jim Montgomery his first W in the NHL and pushes the Stars’ dominance of the ‘Yotes at AAC to 11 wins.

Player of the Game: Ben Bishop and his 30-save shutout.

Miro Heiskanen Watch: Sorry Ms. Jackson, but it only took Miro one shift for the 19-year-old to show the NHL that he is for real. Miro immediately showcased his elite skating ability as he controlled the Dallas attack for two high-quality scoring chances and diffused a potential Coyote attack with a slick poke check. After reclaiming the puck, he then deked his way out of the forecheck to escape his own zone like a boss. Don’t believe me? Just watch. Also, keep an eye on Marc Methot near the end as he instructs the young Finn to calm it down a bit at the end of the shift. Oh, and Miro was third on the team in ice time. In. His. First. Game. Can we sign him to a 15-year contract right now please? BE STILL MY BEATING HEART.

• Victory Green™ vs. Winnipeg Jets, 5-1.
Winnipeg has given your Dallas Stars fits recently to the tune of eight losses in a row spanning way back to the year 2016. Dallas has just been regularly blown out by the squad from Manitoba. So, to see the Stars thoroughly trounce the Jets, well, that’s a step in the right direction — and that’s putting it mildly. The Stars’ first line absolutely throttled Winnipeg at even strength as the top powerplay line cashed in three goals on five chances to humble a team that many believe to be the best in the West. Usual Star-killer Patrik Laine was rendered ineffectual through the affair in large part to the effort of Esa Lindell, who has quickly emerged as one of the NHL’s most underrated defenseman. Laine’s frustration — perhaps in part due to AAC music man @tweetgrubes spinning this song as a nod to his likeness — led the sniper to a kerfuffle with our softspoken defenseman. Indeed, the speed and tenacity of the Stars befuddled Winnipeg, causing them to take costly penalties and lose composure as the Stars coasted to VictoryGreen™.

Points of Interest: Your Boi Jamie Benn done knotted his 600 and 601st NHL points in this one. Ben Bishop’s shutout streak ended at 82 minutes. Move over Antoine Roussel, there’s a new a new hate magnet in town: Connor Carrick for some reason drew the ire of the Jets all night, getting blasted by cheapshot artist Dustin Byfuglien with a cross check in the back before hell breaks loose.

• Darkness Music vs. Toronto Maple Leafs, 7-4.
The winner of the John Tavres sweepstakes, Toronto looks to be a force this year in the Atlantic Division. And there’s a lot to like about the Leafs, if you actually like the Leafs. The impressive offensive talent of Toronto quickly made its mark on the contest by opening the scoring and exposing the Dallas defense catching eggs, which unfortunately would be the case the entire night. The Stars’ top line did its best to answer the scoring outburst of the Leafs with goals by Klingberg, Seguin, Radulov and Benn, but the combination of zero scoring depth and uncharacteristic defensive miscues were enough to sink the Stars for their first loss of the season. DARNIT TO HECK!

Poo Poo notes: Bishop looked all out of sorts, flailing about and unable to control his rebounds — a stark contrast to his stellar performance in the first two games, which were good enough to make him third star of the week in the NHL. Lindell, after looking so great in the opening games, he turned in one of his worst performances since we can remember, as his coverage in front of the net was curiously weak. Miro earned his first NHL point on an assist to Radulov, but was unable to score late in the third on a saucy pass from Jason Spezza. And Jim Montgomery must have listened to Malcom Gladwell’s podcast about pulling the goalie because, with nearly four minutes left, Bishop pulled for the extra attacker only to have the Leafs score on the empty net. Bet we won’t see that again anytime soon!

Player(s) Of The Week!

It’s glaringly obvious that the Stars rely heavily on their top line for, well just about everything. So, this week, we are awarding the Player of the Week to all three of those good bois that occupy Line 1 in Victory Green™. All but one Stars goal this week was notched by either Jamie Benn, Tyler Seguin, Alexander Radulov or John Klingberg — exciting but also alarming. Yes Jim Nill, we know you publicly dismiss secondary scoring issues, but you ain’t fooling other GM’s or Stars fans with that brown noise. Team issues aside, watching the skill of these elite players is a joy. Pucks zip from tape to tape with a confidence that surely unnerves the opposition. The combination of Radulov’s swashbuckling tenacity, Benn’s physicality and release, and Seguin’s speed and playmaking is the stuff of video game insanity.

This Week In Your Dallas Stars:

• Saturday, 10/3, at 7 p.m. vs. Anaheim Ducks (Home): The Corey Perry-less Ducks are facing an uphill climb this season with a rookie-filled roster. Too bad, so sad.

• Tuesday, 10/16, at 6 p.m. vs. New Jersey Devils (Away): The East’s wildcard winner fields a nearly identical roster to last year. Will they be able to eek out another postseason berth?