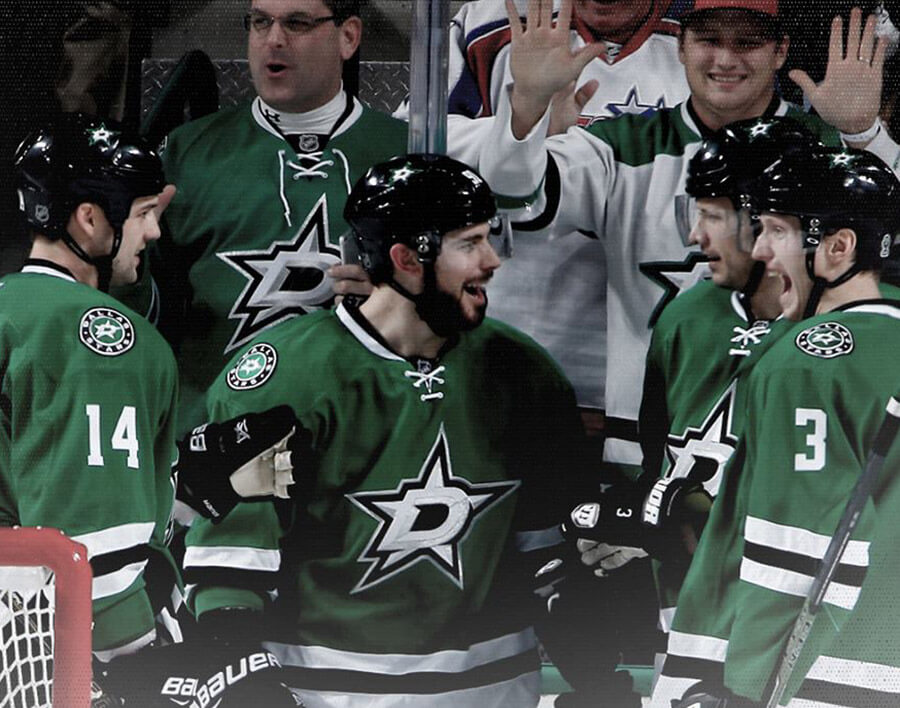 Breaking Down Which Dallas Stars Were Naughty This Year, Which Were Nice, Which Didn’t Really Matter and Which Are Resting In Peace.

Your Dallas Stars seem to be getting their groove back just in the St. Nick of time. Going 5-4-1 in their last 10 games may not seem all that great, but their overall team play has markedly improved. The Minnesota Wild are on a 10-0-0 run and have vaulted up the standings, so who’s to say Dallas can’t do the same? Which one of you will say such a thing? Any of you? I doubt it, because we are all Stars fans here and we believe in Victory Green™.

• Loser Point vs St. Louis Blues, 2-3 (OT).
The operative word here is “point,” because the Stars got one when they shoulda got two. St. Louis was down a few key players, and on the second night of a back-to-back on the road, but the got-damn overtime frame once again sunk the Stars. Sandwiched between this win for the Blues was a loss to Edmonton in overtime and a loss against Tampa Bay in which they surrendered five goals. The Stars really could have/should have won this game at home. Jake Allen’s spectacular netminding was the difference-maker in a game Dallas was largely in control of, as Patrick Eaves and Jason Spezza were your goal scorers at home. Bah humbug.

• Victory Green™ vs Los Angeles Kings, 3-2 (OT).
Call it a Chrimbus miracle: The boys done won in overtime! Hallelujah! All joking aside, there was a family who had twin boys who looked identical, but were opposite in nearly every way. One was an eternal optimist and the other a gloomy pessimist. Just to see what would happen, on Christmas day, their father loaded the pessimist’s room with every toy and game he could afford while the optimist’s room was filled with horse manure. Upon waking, the father heard crying from the pessimist’s room. “Why the hell are you crying?” the father asked. “Because I’ll need batteries for all this stuff, my friends will want to borrow everything, and eventually everything will get broken,” answered the pessimist twin. Passing by the optimist twin’s room, the father found him dancing and jumping for joy in the pile of stinky poo poo. “What the hell are you so happy about?” he asked, to which his optimist twin replied, “There’s got to be a pony in here somewhere!” That joke is my metaphor for the 2016-2017 season so far. I hope you liked it, because that’s the only thing I got you for Christmas.

Now, let’s see what Santa brought for the members of Your Dallas Stars.

• Anti Niemi: Has given the team opportunities to win more often than not.
• Tyler Seguin: Bounced back marvelously from nursing several injuries.
• Patrick Eaves: Leads team in goals despite being so busted up that homeboy can’t even practice no mo.
• Curtis McKenzie: Makes an impact in the game even with his limited minutes.
• Adam Cracknell: Surprisingly effective, competent in all zones.
• Devin Shore: Quickly developing into a talented forward with offensive upside.
• Dan Hamhuis: Solidifies every defensive pairing he gets thrown on.
• Jordie Benn: Playing hard, playing well, playing for Harambe.
• Radek Faksa: Solid sophomore year, needs to improve on face-offs (47 percent).
• Antoine Roussel: Somewhat inconsistent, but playing the best hockey of his career, usually.
• Johnny Oduya: Penalty killing falls off a cliff when he’s out of the lineup.
• Esa Lindell: Mr. Kringle likes what he sees.

• Jim Nill: Has acquired a glut of mediocre defenders, and is a bit too “patient” with assets who don’t actually get playing time/get better.
• Lindy Ruff: Tries to appease the glut of defensive assets, none of which will develop on this cluttered depth chart.
• Jamie Benn: Please take a week or two off, we all know you are injured, injured bad. We love you, Jamie.
• Cody Eakin: Between injury and suspension, the ninja’s played 14 games with one assist and a minus seven.
• Jason Spezza: A couple excellent games mixed in with a lot of coasting. He’s a minus 16 , the worst on team. The team needs a hell of a lot more from a player making $7.5 million a year. Damn!
• John Klingberg: Some games he makes a nice pass, most games he farts and falls down.

• Lauri Korpikowski: Putting up unexpected numbers, but gets beat often in puck battles.
• Brett Ritchie: Hard worker, has the tools, can’t hit the broad side of a barn with his shot.
• Stephen Johns: His possession numbers look bad but is sole physical element on the back end.
• Patrick Nemeth: Sometimes he plays defense, sometimes he plays forward, but mostly he doesn’t play at all.
• Jamie Oleksiak: It’s obvious the team doesn’t know what to do with him anymore.
• Kari Lehtonen: Playing below his career goals against average and save percentage, but somehow doesn’t look like the problem.

• Jiri Hudler: Back in the lineup, but mono (most likely), has sapped his energy.
• Julius Honka: A sweet young bird whose wing needs mending.
• Patrick Sharp: Concussions during contract year, Sharpie nearly out of ink.
• Ales Hemsky: Another contract year player, will likely will never play for the Stars again :/
• Mattias Janmark: Season-ending surgery will postpone his sophomore season

Let’s hope things keep looking up as the team heads to Phoenix tonight. Then it’s back home Thursday to face the Avalanche, and then the team’s annual New Year’s Eve contest finds those Panthers of Florida stalking the AAC.