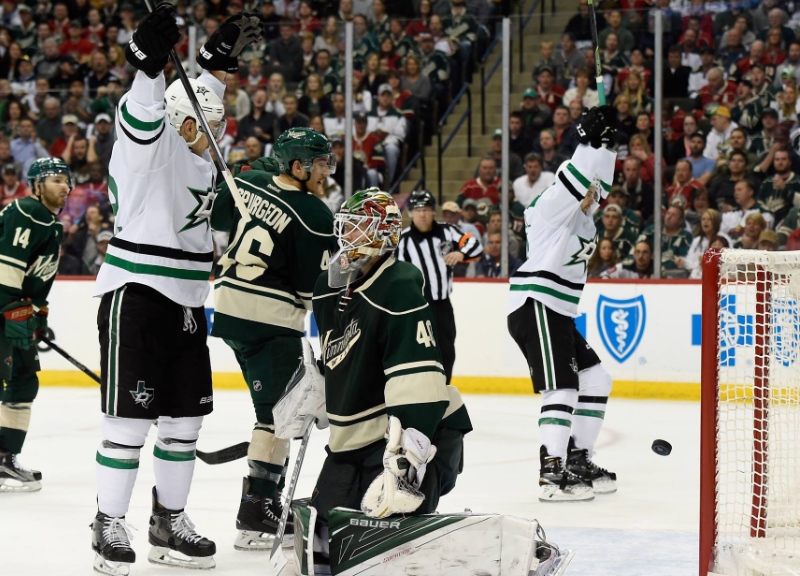 It's On To The Next One For Your Dallas Stars.

Your Dallas Stars are off to the second round of the playoffs for the first time since 2008. That's pre-Barack Hussein Obama! For Kari Lehtonen and 12 other teammates, it's the first time in their careers that they've travel beyond the confines of The Shire.

The Jamie Benn-led Stars jumped out to a 2-0 series lead, but then faced a decidedly more determined Wild squad, whose subsequent purification in the waters of lake Minnetonka resulted in some real Wild 'N Out contests in games 3 through 6.

Were your Dallas Stars able to hold off the desperate onslaught of their wounded rival and win the series? Let's take a look and find out!

How the Stars suddenly forgot how to play hockey after the first period is befuddling. Yes, Minnesota was playing desperate hockey in front of a ravenous fan base, but the Stars responded to the knife fight with swinging pillows. John Klingberg had, perhaps, his worst game in a Victory Green™ sweater, ending the night a minus 3 and fittingly helping the Wild score an empty-net goal with a limp-wristed pass towards two Wild forwards. Save for Stephen Johns, the entire D corp was a mess, losing puck battles and allowing Jehova's Witnesses, Girl Scouts and vacuum cleaner salesmen to post up in Kari's front door. Despite allowing four goals, Lehtonen was solid, making some very difficult saves and allowing his team to counter punch. 'Cept they didn't. The Stars forwards were ineffective in the offensive zone, unable to generate quality scoring chances and ended the game with a bashful 17 shots on net, just one shy of their lowest total of the year. The power play went 0-2 but, at times, looked good, moving the puck and changing the point of attack. Jamie Benn nearly scored on a great feed through the crease, but like most of the night, was left spinning in circles wondering if he missed any deductions on his taxes.

It is worth noting that Kris Russel was unable to play due to illness, and to keep a hockey player out of the playoffs for anything other than a lacerated Achilles must be a real boopy boop of a womp. I wouldn't be surprised if there is a bug floatin' around in the Stars locker room at the moment — just some food poisoning for thought…

• Victory Green™ at Minnesota Wild, 3-2. What a circus game these playoffs can be! The Stars looked like a rubberneck giraffe in Game 3, a comedy of errors, but Game 4 featured a more disciplined team that realized how closely their post-season run is flanked by life and the funeral pyre. Against these Wild underdogs, they are up on the tightrope, and the spotlight and altitude seems to get to them.

“They had a lot of energy, and their building was lit up. We knew we were going to see a push, and I thought we handled it pretty well.” — Lindy Ruff

Antti Niemi was in net for the contest in a sort of ¯_(ãƒ„)_/¯ move by Lindy. He played well for the first two periods, but really shined in the third when the Wild went into hyper-attack mode. Kris Russel was also added to the lineup for this one, and what a difference it is to have him on the third defensive pairing. He is lauded as a shot-blocking, stay-at-home defenseman, but it's his ability to get the puck up ice as his team is getting pounded that's his biggest asset — a skill developed from all those years on bad Calgary Flames teams. It was a tightly contested affair with neither team generating much momentum, but because of Cody Eakin's turnovers, Jason Spezza was finally paired with Jamie Benn on the top line. The makeshift duo started generating chances together once the captain was freed from the shackles of the turnover prone Ninja. The Stephen Johns/Johnny Oduya pairing made several mistakes on pucks, but unlike Alex Goligowski/John Klingberg, they bailed each other out of the miscues. After middling about for the series, the power play showed up in a big way, scoring on each of its two chances. And that's what this game came down to. As Stars analyst Razor Reaugh often says, it's all about special teams and goaltending.

• Victory Green™ at Minnesota Wild, 5-4. Through 43 minutes, the Stars were all business, moving the puck with precision and reducing the Wild's offense to little more than bad-angle shot attempts. Four unanswered goals by the big guns — Klingberg, Spezza, Patrick Sharp and Benn — had the “State of Hockey” in a “State of Oh Crap We Suck At Hockey And It's Always Cold and Miserable Here.” I imagine this is how you thought the series should have gone thus far and were content to watch the clock tick away on a relatively dull game. I know I was. Maybe it was pride, or the disdain of having to listen to Pierre McGuirre on the bench, but the Wild skaters finally woke up after scoring a power play goal. Then, 16 seconds later, the Wild scored again as Stars fans everywhere collectively downed a bottle of San Pellegrino, slumped their shoulders and whispered, “Oh, gee whiz guys, not again.” With momentum firmly on Minnesota's side, they controlled play and caused frequent Dallas turnovers as they outhit our friends 26 to 11. Some say they only did it for the ratings, but Dallas let in yet another goal to reduce their pudgy lead to merely one as it looked like there was nothing Ruff could do to stop the bleeding.

“The building got loud. I was just trying to tell them, 'Listen, we've got to play.' You've got to live that environment to get better at it.” — Lindy Ruff

Thankfully, Devan Dubnyk has some of the worst goalie luck in the league as a wobbly point shot from Goligowski managed to drop behind the hapless netminder and get knocked in by his own skate. Dubnyk reminds me of old Edmonton Oiler's goalie Tommy Salo; he's just good enough to lose in humiliating fashion. To their credit, the goofy goal did not deter the Wild as they continued to press, sensing their season coming to an end. They repeatedly crashed Kari's net to drive in Jason Pominville's fourth goal of the playoffs and make it a thrilling, one-shot hockey game for the last three minutes of play. Minnesota pulled Dubynyk for the extra attacker and came this close to tying the game. But Kari held on, and Dallas moves on. Game. Blouses.

ROUND 2: Fight!!! Who will win decisive Game 7 tonight between the Chicago Blackhawks and St. Louis Blues? Who would you rather see the Stars face in the next round? Who will the Cowboys draft with the No. 4 pick? Let me hear from you Dallas! Call in now 214-787-1033.

P.S. Prince was the best. Tremendous recording artist. Effortless performer. Prolific songwriter. Intriguing persona. The best. I'd like to share with you two of my favorite performances from The Purple One, both of which feature memorable stage exits. He also predicted 9/11.