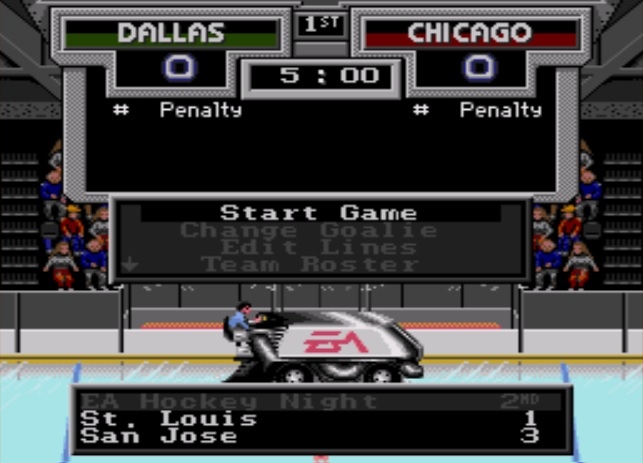 The Stars Honor Former Captain Brenden Morrow With A Nice Pair Of Wins.

Your Dallas Stars are in the midst of a difficult stretch of their schedule, nursing a revolving door of significant injuries, juggling new forward combinations and defensive pairings, all while battling three Western Conference juggernauts for the No. 1 seed. Good teams rally behind such adversity while the mediocre, well, act like the Dallas Cowboys.

Injuries and excuses be damned, the Stars wrapped up their longest and most difficult home stand of the season with seven hard-earned points out of a possible 10. Wowza! Let's check out their strong to quite strong performance, highlight the player of the week, reminisce over an old friend and cast our inquisitive eyes to the future.

• Darkness Music vs Los Angeles Kings, 2-5. Oh, how the Kings love to turn it up this time of year. After middling in the muddy waters of the Pacific for the majority of the season, the Kings have been finding their competitive gear of late, and are now in contention of taking the title of Western Conference regular season champions. The Kings were opportunistic and positionally sound, even on the second night of a back-to-back — one which saw them shellac the Blackhawks 5-0 the night before. Former Dallas backup goalie Jhonas Enroth held the Stars to just two goals in the start. Yup, this is the same Enroth who went 5-5 in his short tenure as Kari Lehtonen's backup. But turnovers and two-on-ones were the real story here. The Stars fielded their big boy lineup with Jamie Oleksiak, Radek Faksa, Patrik Nemeth and Travis Moen to combat the aggressive Kings, but could muster little to stop the Kings. Winger Kris Russell and defenseman Alex Goligowski were particularly befuddled by the Kings, leaving Kari (and eventually Antti Niemi) out to dry on intercepted passes and standstill defense all night. L.A. has recently won a Stanley Cup, and it shows. They play with strong fundamentals and a snarl that makes for a dangerous playoff opponent. Here's hoping Los Angeles makes it no farther than the first round, and that they can finally overcome their drug habit.

• Victory Green™ vs Tampa Bay Lightning, 4-3. Now, this is more like it. On a night that paid homage to the late, great Brenden Morrow, current captain Jamie Benn honored his former teammate with a very Morrow-esque performance in the Stars victory. Aiding Benn was first line center Cody Eakin who, after being benched early in the first period for suspect play, earned three assists and played a pivotal role in wrestling the game back from last season's Eastern Conference champs. After taking it a 3-2 lead into the third, baby-faced behemoth Stephen Johns knotted up the game on a blast from the blue line, notching his first career NHL goal. Two minutes later, Benn put Dallas on top with a mystifying backhand that Tampa goalie Ben Bishop is still in disbelief over. Call it a David Blaine Backhand. Despite all the warm fuzzies that the lunch pail win gave the Stars faithful, it also gave them sunken hearts and queasy stomachs to learn that Tyler Seguin received a paper cut on his Achilles tendon during the game. Seguin managed to finish his shift in the closing seconds of the game to secure the victory with a skate boot full of blood. What a tough S.O.B. Meanwhile, if I get a headache, I want to lay down and pass out. In a conversation with my friend not named Justin Timberlake wink wink, he done told me he has to take the day off if he gets less than six hours of sleep. What about you? Would you keep working if your tendons were cut open? What about if you had a headache or didn't get eight full hours of sleep? Doubt it. Unfortunately, but fortunately considering the severity of Achilles heel injuries in general, Seguin will be out for 3-4 weeks but should be ready for the start of the playoffs.

• Victory Green™ vs New York Islanders, 3-0. How 'bout this for an ominously crappy stat? Before this game, Dallas had lost 9 out of 10 of its Saturday games since Christmas. Would you have bet on that trend? *Shrugs.* A pretty entertaining opening frame ended in a scoreless tie as the Stars worked John Klingberg back into the lineup after a six-game absence from injury. The Stars and Islanders are similarly-styled teams with a free flowing north/south pace. Both tend towards strong physical play and some great hip checks. Me loves some hip checks. First line center Cody Eakin — man, it still sounds weird saying that — opened up the scoring midway through the second on a gorgeous wrist shot that chipped the post's paint on the way in. You could say the goal was executed with ninja-like precision. His 15th goal of the season pushes his point streak to four games. It's really good to see Eakin improve his play as of late. Patrick Eaves scored the backbreaking goal with hustle and flow, stripping the puck of the unsuspecting Islander D to race down to the opposing netminder and put a shot on net, collecting the rebound and depositing it in the back of the net. It's good to see Eaves back and healthy again. He's a quality, multipurpose forward with a beard that could hold six months' worth of rations. The Islanders pulled their goalie Thomas Greiss with four minutes left, and got a couple solid cracks at breaking the shutout. But an Ales Hemsky empty net goal from center ice sent the Brooklynites packing to Long Island. Or Brooklyn. Or wherever they are from. Notable native Long Islanders from the region's most notable high school, South Side High, include Howard Stern and Amy Schumer, but not Billy Joel. Maybe my favorite Billy Joel moment at the Islanders old barn at Nassau Coliseum is the bridge at 1:16 into “Zanzibar.” Damn that's irresistible. Pre-River of Dreams Billy Joel was brilliant. I may do next week's Forechecking solely on Billy. Don't think I will? Don't believe me, just watch. Bonus Knowledge Info: Lindy Ruff moves to fifth all-time in NHL games coached with this game — quite impressive! — and the last Stars goaltender to shut out the Islanders was Jon Casey back in '92. I'm just full of informative stat crap today, ain't I?

Not shown here is Stephen Johns, who the NHL doesn't know about yet. But they soon will. Oh, they all will. What the Stars' brass were hoping the young D corps of Nemeth, Oleksiak, Jyrki Jokipakka (R.I.P.) would do during the season was have one of these guys take advantage of the time in the lineup and pull away from the intrasquad competition, establishing themselves as a regular in the lineup. But none of them were able to do so convincingly. Enter Stephen Johns. The big bruising, former Blackhawks prospect took advantage of his opportunity, and by his fourth NHL game, he scored his first goal, terrorized opposing forwards and signed a two-year one-way contract that all but guarantees his place as an NHL regular. I have full confidence Johns will mature into the dominating top four defender that Stars fans have been crying for on about for years. Am I overrating him? No. Dumb question. Next season will feature John Klingberg and Stephen Johns as the team's top pairing, you bimbo. Long live the Johns.

With my favorite captain of all time retiring, I'd like to take this moment to share with you a personal story involving yours truly and Mr. Morrow. Let me paint you a picture all literary like. It was the summer of 2003 or 2004, when, between mowing lawns for my personally 100 percent co-owned with a friend part-time landscaping company (we even had a magnetic sign with our company name on it), I get a call from another, different friend of mine on my Nokia phone featuring Cingular Wireless. I know what you're thinking, “Oh, he's got at least two friends and he's mowing lawns through college in the pre-smart phone era? He a badass or somethin', huh?” No, just follow the story, please. My friend on the crystal clear Cingular Wireless connection says, he says to me, “Hey, I'm at the airport and I can see Brenden Morrow just waiting for his flight to arrive.” Obviously, I'm paraphrasing, or some other kind of literary device, because this was over a decade ago, and I ain't remember that conversation necessarily verbatim, if you will. He then asks if I'd like to talk to him, and I say yes. He walks (I presume) to Brenden and hands him his cellular phone. “Hello?” I instantly recognize Morrow's voice, despite having never heard it before. That's real love. I ask him a series of innocuous questions to which he politely answers, only to have me cut his thoughtful responses short with even more inane questions. I'm young, excited and my arm is sore from using a WeedWacker all day. He continues to answer politely as I surmised he was speaking through a smile, slightly amused that he was recognized at all in the state of football concussions. One of my brilliant, Charlie Rose-level questions was about how the team would respond with Derian Hatcher deserting the Stars to join the hated Detroit Red Wings that summer. And he gives the time-tested professional hockey player response of how hard the team will work, about how everyone is accountable for the success of the franchise, and to expect the group to fill the void in the upcoming season. At risk of sounding like an entitled Southlake Carrol kid to Brenden, I become aware of my intrusion of his time, I thank him for speaking with me, and wish him luck. Fast forward four or five years, and I'm in the nosebleeds of American Airlines Center witnessing one of the single greatest individual efforts of a professional athlete as Morrow ends the quarter finals series against the heavily favored San Jose Sharks in the fourth overtime. Brenden Morrow rules, that's it and that's all there is.

It's the Blackhawks, Coyotes and Sharks. Oh my! Tuesday, Thursday and Saturday, all on the road. So turn on, tune in and drop out as the Stars look to pad their lead as best in the West.

And be sure to check in next week, when we here at Forechecking dissect and discuss Scenes From an Italian Restaurant, and I'll drop a The People vs OJ Simpson EDM remix just for you. 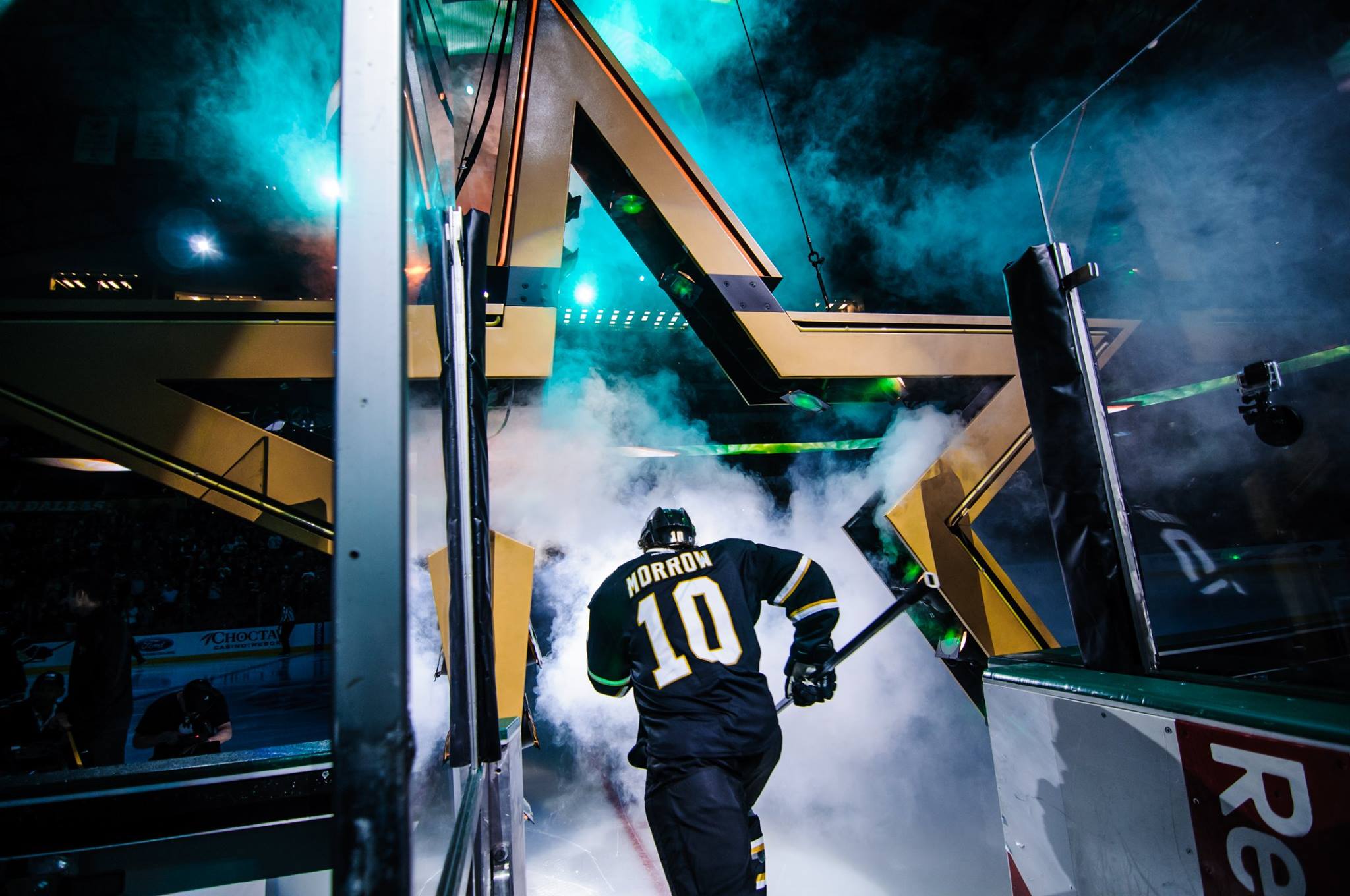