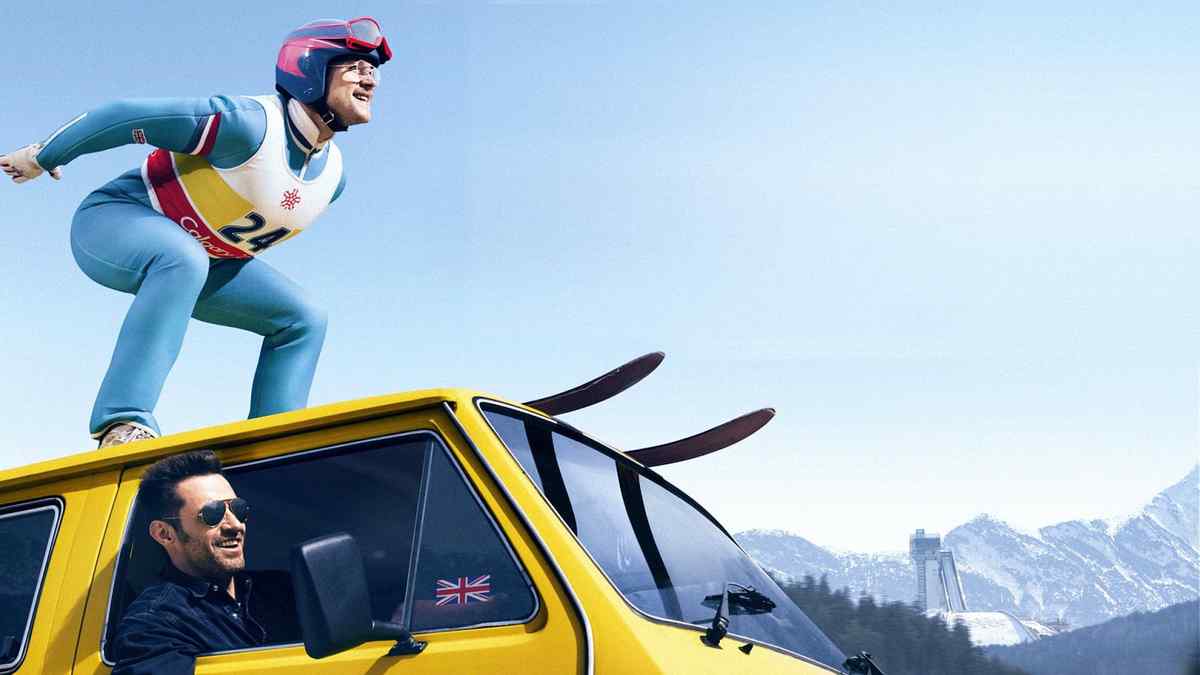 It's Massively Cheesy, But It's Tough Not To Root For Eddie The Eagle.

Everyone loves an underdog. Whether it's pulling for Rudy to get on the field or cheering on the first-ever Olympic bobsled team from Jamaica, an underdog story can hit you right in the gut. The latest big-screen underdog tale hoping to do that is Eddie the Eagle.

Our hero here is Eddie Edwards, who has dreamed of becoming an Olympian since he was a child. One problem: Eddie's not strong or fast enough for any of the summer sports. And so he turns to skiing — and, eventually, ski jumping.

Eddie is hardly your quintessential athlete. He's stocky, near-sighted and basically just doesn't fit the bill of your traditional Olympian in any sense. Aside from doting mother, everyone who crosses his path tries to persuade Eddie to give up on his dream and find something — anything — else to do. Eddie does have one thing going for him, though: He has no quit in him. Nothing will stand in his way.

Taron Egerton (Kingsman: The Secret Service) plays him well, too. He's almost unrecognizable with his big glasses, stringy hair and scrunched-up nose. He brings a tenacity and undeniable sweetness to Eddie, the last kid everyone picked last in dodgeball, the one seemingly destined to live with his parents forever and stay in the same small town his whole life without ever amounting to anything. We all knew that kid — hell, some of us were that kid. So it's easy to sympathize with Eddie, even if we don't quite feel sorry for him.

Listen; If all this sounds too cheesy and schmaltzy for you, it might be. This is a stereotypical, very traditional underdog story, where obstacle after obstacle gets in the way of our hero, and each time he manages to overcome it. But even with some cheesy lines and predictable beats, the story is still fairly captivating. Plus, it's difficult not to like Eddie as a character. He has more drive and determination than most.

Thrown into the mix is Hugh Jackman as Eddie's coach, Bronson. He's also an underdog of sorts. A former Olympian hopeful with a troubled past, he escapes his problems with alcohol and has settled into plowing snow in the same region where Eddie is hoping to train. Eventually, these two misfits find each other and, begrudgingly according to Bronson, they begin training. Jackman is fine in this role. It's nothing to write home about, but he brings a mature and levelheadedness to Eddie's high hopes and dreams.

For a sports biography, Eddie the Eagle doesn't break any molds or bring anything new to the genre. But it does somewhat make ski jumping a little more exciting than it already was. And some of the angles and shots created for Eddie's jump scenes are quite breathtaking. There's some great tension when Eddie is about to make his jumps, too. You'll actually fear for a moment that he might not make it.

Mostly, though it's Egerton's performance that lifts this film into something worth seeing. Without his performance, it'd be an easy movie to forget about. But he's just so darn likable. You'll find yourself cheering for Eddie throughout the whole film, just as is the filmmakers' goal, no doubt.