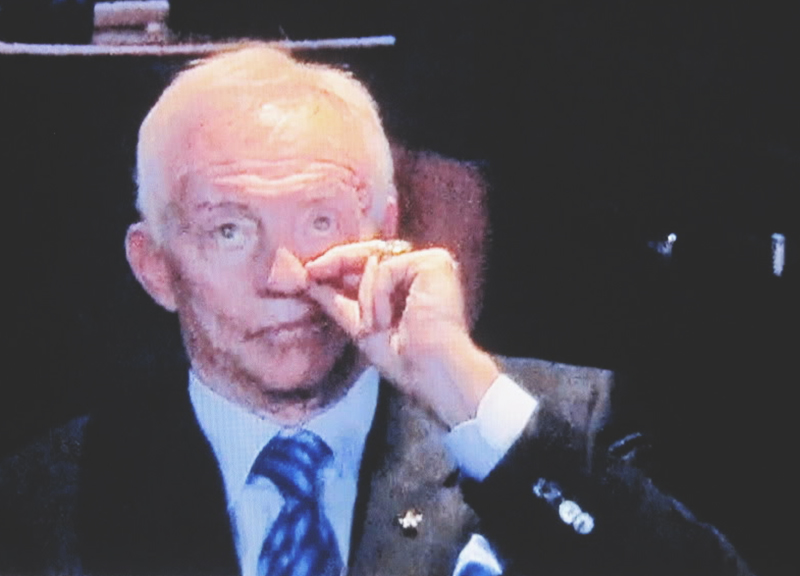 We’ve been saying this pretty much every day of late, but if somehow you’ve missed it, let’s repeat it once more: WrestleMania 32 is coming to AT&T Stadium April 3.

The event alone is a massive deal, but the setting is only enhancing the hype for this year’s event. It’s pretty much a cinch that the venue will help the WWE break The Grandest Stage of Them All’s Michigan-set 1987 attendance record of 93,173, as well as the AT&T Stadium-owned record for a live indoor sporting event in North America, which it set while hosting 108,713 fans for the 2010 NBA All-Star Game and which is what knocked that old WrestleMania III figure from the top spot.

Make no mistake: The stadium — often referred to as “Jerry World” because the stadium really is Dallas Cowboys owner Jerry Jones’s baby — is why the WWE chose to come to the region for this year’s show.

So it stands to reason, given the WWE’s history of incorporating celebrities into its storylines and especially its WrestleMania ones, that Jones himself will somehow figure into the spectacle on April 3. It’s going down in The House He Built, after all.

But how exactly will he be used? Let’s do some wishful thinking.

• Battle of the Billionaires II. If there’s anything WWE head honcho Vince McMahon can’t stand — other than sneezing, his stepfather and the people that watch his television show — it’s people who are richer than he is. This has been shown time and time again through his feuds with billionaire media mogul/former WCW owner Ted Turner and 2016 presidential candidate Donald Trump. So it wouldn’t be that unexpected to see the man who says he has grapefruit-sized testicles square off against Jerry Jones at WrestleMania. And he’d probably win too, considering his nauseatingly muscular body. Bonus storyline: If Vince wins, Jerry Jones has to help him revive his failed the XFL pet project with the Dallas Cowboys somehow involved. Just imagine the Cowboys lining up against the Orlando Rage, New York Hitmen or Birmingham Thunderbirds. Anything for another title, right Cowboys fans?

• Jerry convinces one of the Cowboys to wrestle. This probably sounds ridiculous to a lot of you, and it really is! But it’s also not that unbelievable, considering that New York Giants linebacker Lawrence Taylor wrestled in the main event of WrestleMania XI against Bam Bam Bigelow. Maybe Jerry could convince Tony Romo to step into the squared circle? What’s another collarbone injury if it gets ratings?

See Also: WrestleMedia. // The Best Wrestling Social Media Accounts To Follow While Gearing Up For Wrestlemania 32.

Do not underestimate Jerry’s agility!
• Jerry gets involved with the main event. WWE likes to pack its WrestleMania main events with star power. We’ve seen this from the first ‘Mania with Mr. T and Muhammad Ali, and later with stars like Mike Tyson and Floyd Mayweather. This is all kind of The Rock’s role right now because he’s bigger than the WWE at this point. We already know that Triple H will face Roman Reigns in the headlining match, and we could definitely see Jerry Jones getting involved there in some capacity, either as the guest referee or timekeeper or whatever else they feel like doing with him. Or maybe Jerry just buys the WWE Championship from Triple H, much like Ted DiBiase once bought it from Andre the Giant. Hey, if you can’t win the Lombardi trophy…

• A heel insults the Cowboys right to Jerry’s face. One of the easiest ways to wake up a wrestling crowd is to send out a heel to insult the local sports team. It’s pretty much the go-to method of heat-seeking in WWE. Also getting a big pop from the crowd is when these heels get their comeuppance. They usually do something like this at every ‘Mania. For the sake of the location, let’s assume it’s going to be Bo Dallas this year. He’ll come out during an opening welcome speech from Jerry or something and then talk about how the Cowboys are terrible. Right as it looks like he might attack Jerry, the sound of glass breaking rings throughout the stadium and out comes Stone Cold Steve Austin, who proceeds to give Bo a stone cold stunner and pop open a few Steve-weisers with Jerry. He’ll then probably stun Jerry as well, because he’s Stone Cold Steve Austin and that’s what he does.

See Also: Pins & Needles. // A Whole Bunch of WWE Wrestlers Are Hurt And Probably Out For Wrestlemania 32.

• The Rock helps out Jerry Jones. The Rock has already confirmed that he will be showing up at WrestleMania this year — but it’s still unclear as to what exactly his role will be. He definitely won’t be wrestling, as we would know that by now. But he could be picking up where he left off from the last WrestleMania by getting in a conflict with the Authority. Were Vince or Triple H or Stephanie to rain on Jerry Jones’s parade at some point during the event, The Rock showing up to save the day and layeth the smackdown would be a huge moment for everyone in AT&T Stadium, where the fans are desperate for any win they can get.