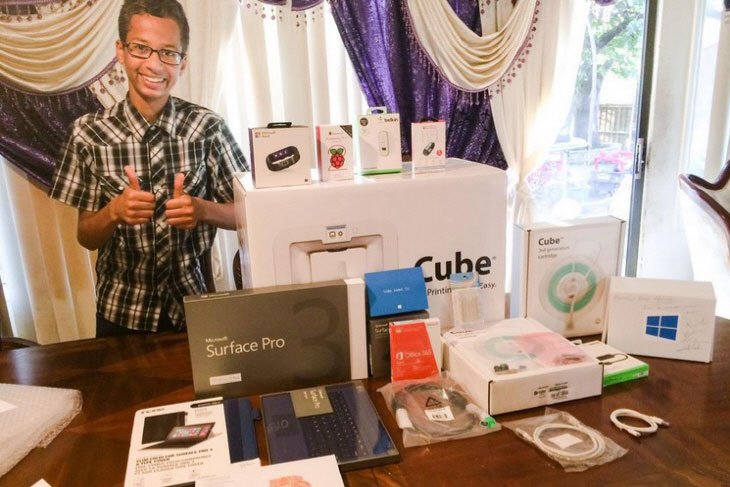 Here Are All Of The Gifts That Ahmed Mohamed, The Irving Teen Arrested For A Bomb Hoax, Has Received

Ever since Ahmed Mohamed was arrested by police a week ago for the bomb hoax incident, he's become somewhat of a celebrity.

He's got his fans, which we will get to, and his fair share of detractors, too.

There have been theories that call into question the validity of why Ahmed brought the clock in the box into school and whether he'd even actually assembled it himself in the first place. What the theories don't mention is that, if Ahmed had devised a plot to expose bigotry in America and overzealous “zero tolerance” school punishment, then he's not the naive geek with a curiosity for technology that many believe him to be.

Then he's actually a legit genius.

Either way, it seems most people are in love with the kid. In the aftermath of this controversy, Ahmed has And, y'know what, like saints, we've rounded up all those gifts for you.

Creative minds are always welcome at Space Camp, and we appreciate donors who help them come. Someone has provided a scholarship for Ahmed.— SpaceCampUSA (@SpaceCampUSA) September 16, 2015

• A NASA shirt from a dude who flew in space.

Looks like Ahmed might need a new NASA shirt. I can give him one of mine – that flew in space! #IStandWithAhmed pic.twitter.com/I5aluiw24C— Daniel Tani (@Astro_Tani) September 16, 2015

• Free circuits, whatever those are.

• A bunch of free shit from Microsoft.

• A year-long, potentially lifetime, membership to TheLab.ms, a Dallas based hacker group.

• • A tour of the Massachusetts Institute of Technology.

How do I get in touch with Ahmed? We (@reddit) wanna intro him to some of our friends in science (+ internship?) http://t.co/Bwgnbz179O— Alexis Ohanian (@alexisohanian) September 16, 2015

• An Invitation to the Google Science Fair.

Thanks @Google for saving me a seat at #googlesciencefair. Amazing projects and people pic.twitter.com/kpjVmlRPHY— Ahmed Mohamed (@IStandWithAhmed) September 22, 2015

• A scholarship at… a business school?

Ahmed if you ever decide to study business, You have a scholarship waiting. @POTUS @IStandWithAhmed #IStandWithAhmed pic.twitter.com/kPiiC5kG2c— New European College (@NewEurCollege) September 17, 2015

• Chance to record… music… with Ne-Yo?

Hey @istandwithAhmed, if you ever want to get into the world of music, let me know. #theworldisyours #IStandWithAhmed— NE-YO (@NeYoCompound) September 17, 2015

• Oh, just an invitation to the White House by the President of the United States, Barack Hussien Obama.

Cool clock, Ahmed. Want to bring it to the White House? We should inspire more kids like you to like science. It's what makes America great.— President Obama (@POTUS) September 16, 2015