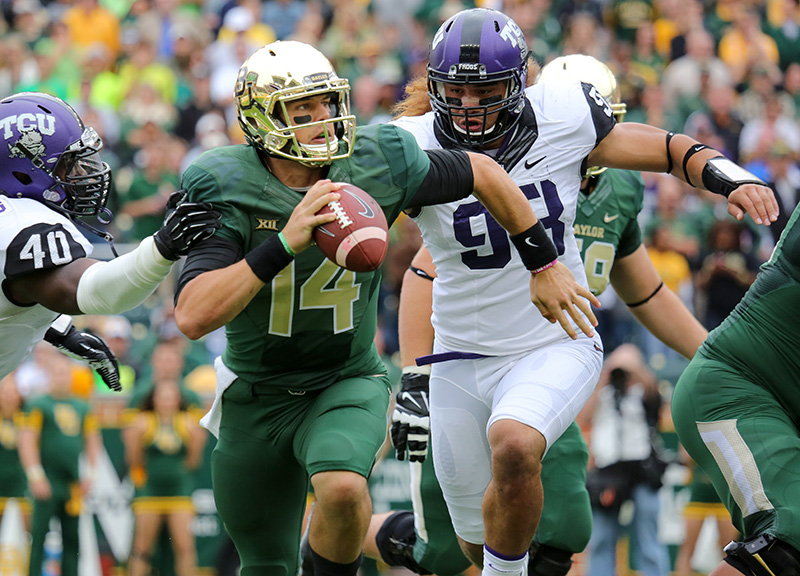 TCU head coach Gary Patterson is not one to miss an opportunity to take a shot at his favorite rival.

Today, during his weekly press conference, he addressed yesterday's news that senior defensive end Mike Tuaua and redshirt freshman Andre Petties-Wilson had been arrested on felony robbery charges that included stealing a case of Keystone Light — an essential to any TCU student's starter pack — and somehow made it about the Baylor football program.

“It's not even close to what happened south of here,” Patterson boldly stated about the recent incident.

The “south of here” statement not-so-subtly refers to former Baylor defensive end Sam Ukwuachu, who was recently convicted of sexually assaulting a Baylor student after already having been dismissed from Boise State for disciplinary reasons. Then Patterson went on to defend Tuaua, his former team captain.

The mistake Tuaua allegedly made took place on Friday, September 4, just one day after the Horned Frogs' season opener against the Minnesota Golden Gophers. According to the police report, three students were beaten outside a house party after they were hit by a beer can and confronted another group — one that included Tuaua and Petties-Wilson — about why a can had been thrown. According to the same police statement, the assault finally stopped when one of the suspects yelled, “Get the beer!” That's when Tuaua — identified as an “Asian-pacific male with big hair” — allegedly picked up the case of beer that belonged to the victims and ran off through an alley.

Tuaua and Petties-Wilson were suspended from the TCU football team for unspecified reasons on Monday, September 7. Seems we now know those reasons.

In any case, Tuaua picked a poor time to allegedly be involved with an off-field transgression. The defensive end, who was credited with three tackles and half a sack in the season opener, is yet another in the laundry list of defensive starters missing from action for the Horned Frogs. Worse, with each passing game, that list just keeps on getting longer.