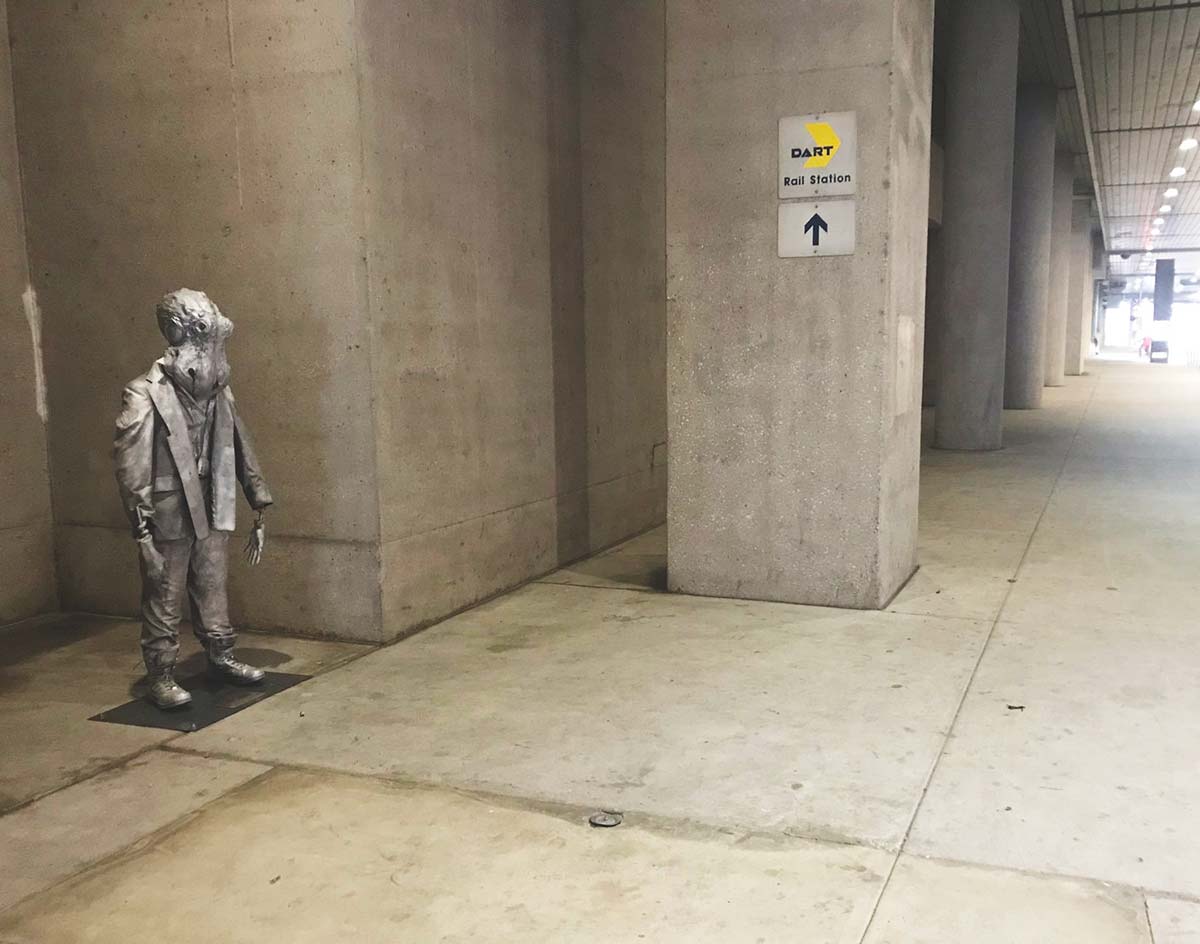 We Asked A Marine Biologist If Dallas Could’ve Been Founded By An Octopus. She Said It Wasn’t Likely — But She Also Didn’t Rule Out The Possibility, So…

Yesterday, our worlds were rocked by appearance of a mysterious new statue underneath the Kay Bailey Hutchison Convention Center — a sculpture that, among other curious reveals, rather shockingly claims that John Neely Bryan, who founded the City of Dallas in 1841, was a cephalopod.

Unsure of what to make of all this — and, frankly, not really confident in our knowledge of cephalopods in general — we decided to reach out to a marine biologist in hopes of learning more about these creatures and their abilities. Namely, we wanted to learn if cephalopods (read: squids and octopuses) are even capable of an accomplishment such as founding a city.

Turns out, they are! Well… maybe.

After a little back and forth on Twitter, we were referred to Dr. Sarah McAnulty, a professor at the University of Connecticut who focuses on squids and other cephalopods in her studies (and, conveniently, the executive director of a nonprofit that helps scientists communicate with the public better) who was game to answer our questions about these fascinating animals.

While McAnulty pretty much shattered our dreams right at the top our discussion by pointing out one glaring reason why it’s very unlikely that Dallas’ founding father was a cephalopod, she also detailed to us a number of reasons why she believes a cephalopod is indeed capable of founding a city. In all, it was a pretty mind-blowing discussion — especially toward the end of our talk, when McAnulty, a great sport, suggested a couple of ways in which Bryan’s cephalopod connections actually make a lot of sense.

Read on to see what she had to say about Dallas’ possible start at the hands (tentacles?) of a cephalopod.

Thanks so much for speaking to me today, Dr. McAnulty. Just to get this out of the way, can you tell me about your connection to cephalopods?
Well, I just got a PhD in squid biology at the University of Connecticut…

What’s your initial takeaway?
OK. So, I think that there’s pretty much no way this guy was an octopus — even though I would typically entertain this sort of nonsense — strictly because he lived so long. He just lived longer than the typical octopus does.

Yeah, John Neely Bryan lived until he was 66 years old. How long does an octopus normally live?
Typically, just one to two years. The longest-lived octopus that we know about lived for 15 years. Plus, they all live super, super close to the ocean. So, unless there’s some octopus out there that we don’t know about — one that’s living many times longer than any octopus that we’re familiar with — this guy likely couldn’t be an octopus.

OK, but what about cephalopods outside of the octopus sphere? Squids can live a long time, right? Like, giant squids?
Giant squids live way less longer than you’d imagine! They live, we think, about five years at the long end. Cephalopods just don’t live a long time. They live fast and die hard. But, certainly, an octopus would be clever enough to found a city, I would imagine!

That’s amazing. What are some of the ways that we know that an octopus is pretty smart?
They’re good at problem-solving. We give them little puzzles to find their food, and they can do that pretty well. They can watch another octopus solve a puzzle — and then solve it much, much faster than if they hadn’t just watched the other octopus. They learn! And squids are really good at working together in groups. They can use their color to communicate among one another. So, for example, maybe a reef squid has found its mate, and it wants to signal to the other squid around to back off. It can take half of its body and put on like an angry, aggressive pattern — and then put a friendly pattern toward its mate. And then, if it switches to the other side real quick, right when it’s behind its mate, it’ll flip the colors around.

What are some notable achievements of cephalopods throughout the years?
Well, there’s that one octopus, Paul, that was successfully calling World Cup matches. So, we’ve got that! And they’re extremely good at escaping tanks. I had octopuses in the lab, and we had to basically lock the tanks down — because otherwise they would find a way out. There’s also a story from an aquarium where the lights were getting left on and the octopus figured out a way to short the circuit by squirting water at the electrical boxes to turn the lights off — because it was nighttime and it wanted some darkness. Now, I can’t verify that this story is definitely true, but it is a story passed around among octopus husbandry people.

Did I read correctly that cephalopods used to be mollusks? How long have they been around?
Yeah, exactly. So, 500 million years ago — a real long time ago, before trees even existed — they were animals that kind of looked like… well, imagine a small traffic cone with some arms along the bottom. They were, like, kind of walking along the sea floor back then, then evolved from there. At the time, everybody was living on the sea floor. There was nobody swimming at the time.

So, you could say that, at the time, the sea floor was like a major metropolitan hub — almost like the Dallas of its day, you could say.
Yes, they were the top dogs of the Dallas of their day! But 500 million years ago. It’s actually entirely possible, though, that there were cephalopods in the area that is now Dallas back at that time.

Because we were probably underwater back then?
Exactly. Like, the whole world for the most part was underwater then — well, I think. I would need to double check my Pangaea textbooks on that one. But, for the purpose of this story, yes, let’s say that the area around Dallas could have been underwater during that time. If so, there very well would have been — certainly — cephalopods in the Dallas area before there were humans. So, we’ve got that going for us.

OK, that was a major thing you just said! Are you telling me that it’s very possible that the first residents of Dallas — like, in terms of semi-intelligent life forms, anyway — could’ve been cephalopods 500 million years ago?
Well, I’m a marine biologist, I’m not a Pangaea biologist. So I have to be careful about what I say here. I can say, for sure, that cephalopods were one of the most intelligent lifeforms at the time.

They’re not mammals, right? They don’t breath air.
They don’t breath air, no. But one cool thing about octopuses is that some of them eat in tide pools a lot, so they’ll take in a big breath of water and hold it in a big pouch in their torso. It’s kind of like when we take a big gulp of air before going underwater — like holding your breath. When you need to walk across a little bit of land between tide pools, you can manage that because you can take a breath of water. So: Did your founder often find himself with lots of water around?

Well, I do know that he operated a ferry across the Trinity River for a time!
Oh! Well, OK!

So, it all checks out then, yeah? Do you think it’s possible that a cephalopod founded the City of Dallas?
The founder of Dallas was probably not a cephalopod. A lot of things would have to happen — things that would be very weird for an octopus — for such a thing to happen. It’s extremely unlikely that he was a cephalopod. But, y’know, what also could be happening, if he was indeed mentally ill at the end of his life as I read, was that he could have thought he was an octopus.

You saw the picture of the statue, right? Is that an accurate depiction of cephalopod traits?
Yeah, definitely. His face certainly looks like an octopus. But, based on what I saw, it was a little tall. It would have to be an octopus manning some kind of robot machine — like where he would sit on the head of a robot.

Like Krang from Teenage Mutant Ninja Turtles!
Literally, exactly like that. And… well, if he was a cyborg and in that whole situation, that would also probably explain where he was getting the extra brain power to figure out communicating with humans and founding a whole city. I’m just saying!

This interview has been edited for clarity. Cover photo by John Bradley.