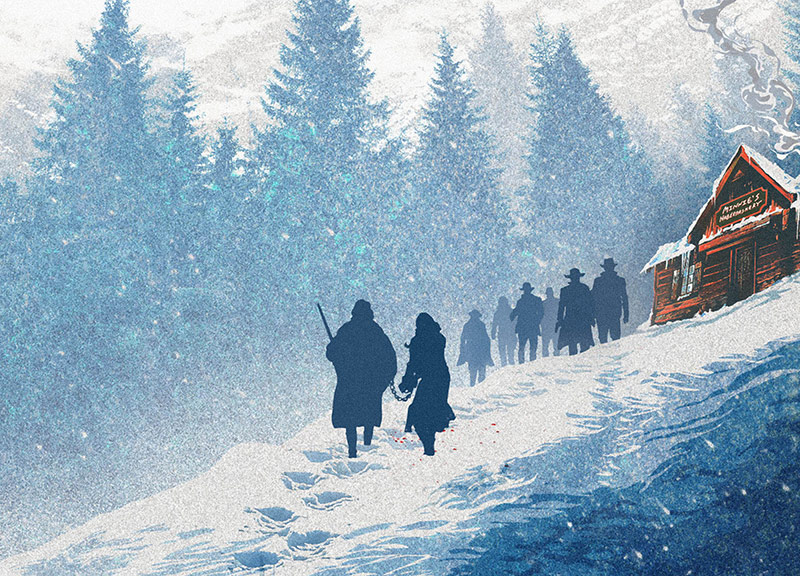 The Hateful Eight Has Some Problems, But It's Ultimately A Reminder Of What Cinema Can Be.

Quentin Tarantino has never been a middle-of-the-road filmmaker or personality. Far from it. With each new release, the guy manages to piss off yet another group, either with his movies themselves or through some opinion he dropped in an interview about that movie.

But you've gotta take the bad with the good with Tarantino and give credit where its due: At the very least, he's an interesting filmmaker who has a clear vision.

And now, after recently having visited the genre with 2012's Django Unchained, he's returning with an even clearer take on Westerns with The Hateful Eight. How clear? Well, this one was shot in 70mm, boasts a runtime of over three hours and was designed to have an intermission. (Dallas audiences actually have the option of seeing the film presented in this intended format, too.)

Despite its hefty and slightly intimidating length, The Hateful Eight really has a simple premise: Bounty hunter John Ruth (Kurt Russell), is bringing the murderer Daisy Domergue (Jennifer Jason Leigh) back to the nearby Red Rock to pay for her crimes and to collect the big bounty on her head. Along the way, Ruth runs into an old acquaintance (Samuel L. Jackson) and an infamous Confederate outlaw-turned-Sheriff (Walton Goggins), and then, of course, a big Wyoming blizzard blows in and causes them to seek shelter in a well-known saloon for a couple of days. Only something's up: The usual owners aren't there, and they've been replaced by four strangers who may or may not be what they seem.

From there, the movie plays out as a tense verbal cat-and-mouse game that culminates in a soon-to-be classic climactic confrontation.

There's no denying it: The Hateful Eight feels like the cinematic culmination of Tarantino's career thus far. Taking a note from the talk-heavy Reservoir Dogs, this a movie where the small but impactful cast is brings all the activity you could really want to engage with over a three-hour period.

Also, it's beautiful The movie opens with a slow pan around an object covered completely in snow — surprising, perhaps, since the movie mostly takes places indoors, save for the similarly gorgeous outdoor-set scenes peppered in toward the end of the film. For the most part, though, Tarantino keeps everything within his well-defined indoor space, allowing the characters to take center stage.

Naturally, since this is indeed a Tarantino movie, there are memorable characters and plenty of snappy quotables. And while it's nice to see Kurt Russell and Samuel L. Jackson being Western badasses, the total MVP of the movie is Walton Goggins; a relative unknown outside of a few memorable, he shines bright as a strangely polite racist that, with time, develops into a much more-nuanced character. Meanwhile, Jennifer Jason Leigh's Daisy is a total badass — an accused killer, who never denies the charges against her and who delight in teasing her captor.

Also, there's plenty of controversy for the general public to wring its hands over — two specific things by my count, although I personally think they work within the film's context of its characters being deplorable people. First: Ruth does not Daisy treat Daisy well at all; the very first time we see Daisy, she has a big black eye that Ruth served her (without remorse) after she mouthed off, and it's just the start of the violence those two share onscreen. Then there's the gratuitous use of the N-word, which, though not as egregious as it is in Django, is tough to ignore, even if it's more fitting in this context than it is in Pulp Fiction.

Like I said, this movie's a culmination of Tarantino tropes, and elements like those are among his film's many staples, right along with the time-skips and gratuitous flashbacks he includes here too. All together, it's actually these signature elements that ultimately this movie from being completely flawless.

But, really, it's damn near that. During this era in which all Hollywood chatter centers around the universe-building of behemoth corporate franchises, it's refreshing as a cinephile to watch a movie that rather masterfully tells a single story and reminds you what really cinema can be.