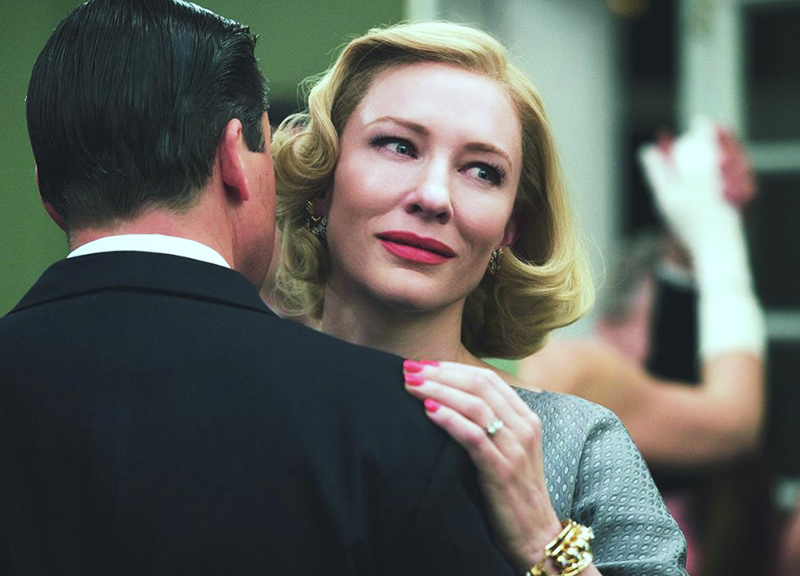 Carol's An Exquisite Tale Of Desire And Coming Of Age.

When we first meet Carol (Cate Blanchett, radiant as ever), she's walking into a bland New York department store in full commands the room. With her glamorous full coat and mesmerizing eyes, she's impossible to ignore. After flirtatiously chatting up shopgirl Therese (Rooney Mara), it's hard to imagine any audience member — man or woman, gay or straight — who wouldn't immediately fall under her spell.

And so it is with the movie Carol as well. It's a gorgeous, complicated and absolutely captivating film.

Set in the 1950s, the attraction and follow-up romance between Carol and Therese is a tragedy waiting to happen. Still, there's always a bit of hope around the corner here: The movie swaps the passionate kisses of most sweeping romances, opting instead for stolen glances and tender touches, and these brief exchanges somehow make Carol more intimate than most any onscreen romance audiences get offered today. Comparing this film's love story to others out there is to compare a prime cut of steak to Hamburger Helper. It's not even close.

And while Arge (Kyle Chandler) and Richard (Jake Lacy) — the male partners of Carol and Therese, respectively — certainly don't understand why they're being left behind in this tale, and occasionally say homophobic things in the process, neither of them are portrayed as monsters. This is a movie full of complicated people, all of them capable of both warmth and cruelty from moment to moment.

“It shouldn’t be like this,” Arge tells Carol after an argument at one point.

“I know,” she replies as she closes the door on his face.

Everyone in this movie has been hurt, and their first reaction is often to make someone else feel that hurt, too. It can get uncomfortable, but humans have a penchant for hurting each other in real-life, don't they?

Ultimately, Carol is also a movie about growing up. In one of Therese's many devastating scenes, she breaks down sobbing, confessing to a friend that she's always said “Yes” to people out of fear of disappointing them, only to wind up disappointing herself. That, too, is a universal feeling.

Put simply, Carol is an exquisitely made romance from Todd Haynes, who has been to the well of forbidden romance in the '50s before in Far from Heaven. This effort's slightly less soul-shattering, but no less gorgeous or well-acted.

In fact, few films are this achingly romantic, this beautifully shot and this wonderfully acted while walking a fine line between melancholy and hopeful.