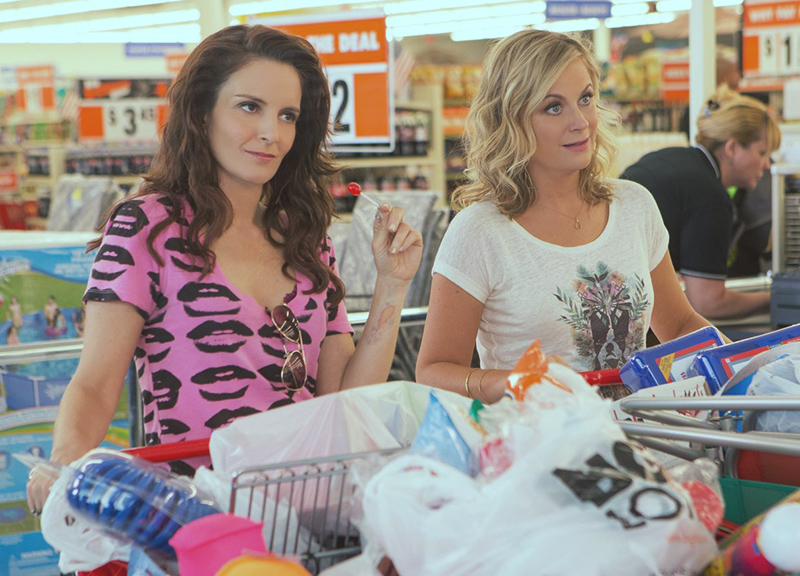 Tina Fey and Amy Poehler Are Comedic Gems With Great Chemistry, But Sisters Is Only A Mediocre Film.

Tina Fey and Amy Poehler won our hearts over a long time ago on SNL. They kept it going on their own respective NBC sitcoms and became our favorite hosts who made the Golden Globes watchable a couple of years ago.

Now, after a swing and miss at movie success with Baby Mama, they're back as sisters in the new Star Wars counter-programmed Sisters.

Fey plays Kate, the older yet wilder sister who can't seem to get her life together. She got fired from her job, kicked out of her apartment and can't keep a stable, motherly relationship with her teenage daughter.

Poehler is the younger but stable sister, Maura. She's the one picking up the messes, being the house mom during parties and a general worrier about everyone else's well-being over her own.

Their classic odd couple scenario comes to a head when they both go to their hometown and end up throwing one last party before their parents sell their childhood home. As you might imagine, chaos ensues.

As for the plot, all the right beats and moments are hit; there really aren't any surprises. What keeps the movie from falling completely flat on its face are, obviously, Fey and Poehler. They have fantastic chemistry on-screen, and it's apparent that they really enjoy working with each other. Writer Paula Pell, who worked as a writer on SNL during Fey and Poehler's tenures, writes really well to these characters and their actors' strengths. Fey gets to cut lose and be eccentric; Poehler flashes her mastery for awkward conversations.

Since the plot is so predictable, some of the action feels a bit droll. There's some bodily humor that the film could have done without because these ladies are smarter than that. Meanwhile, the party at the plot's core takes up a good two-thirds of the film, and, at some points, there are some pacing issues where we're just waiting for the Next Big Shtick to happen. And even then, a lot of those moments are just eye-rolls waiting to happen, as it's pretty clear that these scenarios don't do uh to push the story along beyond affording our leads something they can react to.

Even with its problems, though, the movie still is pretty fun. There are some great side characters. Maya Rudolph is predictably fantastic, if a bit underused, as the old enemy of Fey. And John Cena pops by as a tough but quirky drug dealer, further beefing up his comedic resume after a strong turn in Trainwreck.

Sisters won't come close to being one of the best comedies of the year, but it's still pretty enjoyable. Fans of Fey and Poehler will certainly find plenty to get a kick out of, too, as it's their chemistry that particularly keeps this film from veering into boring territory.