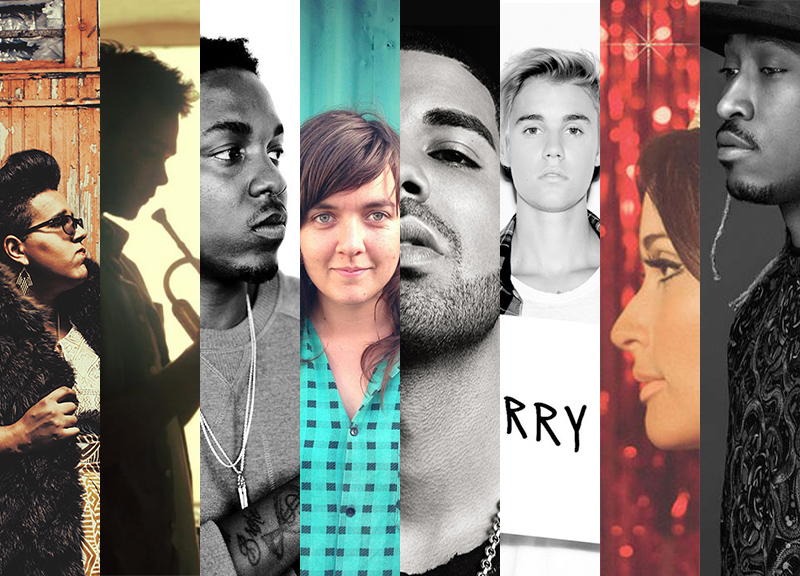 At least on the music end of things, 2015 has proven itself to be a hell of a year.

Really, we faced a battering ram of great tunes all year long.

Kendrick Lamar released his magnum opus tour de force, To Pimp a Butterfly. Kacey Musgraves released a Grammy-nominated follow up to her Grammy-nominated debut. Future assaulted us with a gazillion projects that accent his depravity to numb his pain. Tame Impala released Currents, which solidified that band as one of the most gifted, talented and consistent rock acts going.

And here's the thing: Those are just a few of the names you'll see pop up more than once among the differing tastes seen here in this collection of our Central Track staff's favorite albums of 2015.

Without further adieu, allow me to present our top albums of the year missive from myself, Pete Freedman and Cory Graves. — H. Drew Blackburn

These are my favorite albums of the year.

I don't have much to say here except for the fact that Kendrick Lamar released this year what is probably my favorite album of all time. It's a masterpiece in so many ways.

Also, Courtney Barnett, who I saw live three times between November 2014 and May 2015 is a goddamn genius and a brilliant writer. I accidentally became a fan of hers after stumbling across her “Lance Jr.” song on Bandcamp three years ago, and I am very pleased to have watched her ascend to stardom. She is deserves it. Shout out to Courtney Barnett.

For the first time in about a decade, I wasn't necessarily slaving over just music in 2015. And that makes this annual year-end list-making effort a bit of a weird task this time around: On the one hand, I fully admit that I've been playing a lot of catch-up of late and only discovered in the last few weeks some months-old greatness; on the other hand, in spite of myself, I still listened to a crap-load of great new music throughout the year without really trying, and that's probably as big a testament to this year's sonic strength as there is.

One thing that stands out to me now, looking back on the below selections, is that I think we're right where we should be for the middle of a decade. I mean, this music sounds like the middle of a decade, doesn't it? We seem to have arrived at a confident and distinct point in our music; there's a sort of greater, electronic-aided, clean, high-energy and not-scared-of-pop characteristic to be found throughout this year's best releases.

A little backstory as to how I came to this thought: The other day, I was waiting in line for tacos behind some teenagers who were going on and on about how much they love mid-'00s music, which, aside from making me feel way old, got me thinking about today's music in that same context. And, for the first time in a long time, I think this year's music can be considered with that same kind of sweeping generalization.

That's a good thing, too. I think? Sure, let's go with that.

Anyway, onto my thoughts on the year in albums… — Pete Freedman

Best Album Released In 2014 That Got No Year-End Love Then Because It Wasn't Released Until Mid-December After Most 2014 Lists Came Out.
Charli XCX — Sucker

Old Album I Listened To The Most This Year (As Has Been The Case For About 10 Years Running Now, Seriously More People Need To Know This Album).
The Exploding Hearts — Guitar Romantic

Album I Was Most Hyped Up About For A Week Before I Completely Forgot About It.
Dr. Dre — Compton

Album That The Poptimist In Me Wanted To Love But Just Thought Was OK And Not Really Worth The Hype And I Really Don't Get Where You Guys Are Coming From Unless You All Sit Around Secretly Listening To Radio Disney All Day Or Something.
Carly Rae Jepsen — Emotion

Two Albums I Only Really Like When I Should Be Cut Off From The Bar.
Young Thug — Barter 6
Future — DS2

The 30 Albums I Liked Best In 2015, Presumably Listed In Some Sort Of Order, Although If You Were To Ask Me To Order Them This Way Again, I Might Come Close But I Almost Certainly Wouldn't Get It Exactly Right.
30. Fidlar — Too
29. Rae Sremmurd — SremmLife
28. Sophie — Product
27. Radioactivity — Silent Kill
26. The Weeknd — Beauty Behind the Madness
25. Young Fathers — White Men Are Black Too
24. Hudson Mohawke — Lantern
23. Justin Bieber — Purpose
22. Drake & Future — What A Time To Be Alive
21. Grimes — Art Angels
20. Big Sean — Dark Sky Paradise
19. Speedy Ortiz — Foil Deer
18. Beach Slang — The Things We Do To Find People Who Feel Like Us
17. The Internet — Ego Death
16. Kacey Musgraves — Pageant Material
15. Colleen Green — I Want to Grow Up
14. Kamasi Washington — The Epic
13. Jamie XX — In Colour
12. Drake — If You're Reading This It's Too Late
11. Nathaniel Rateliff & The Night Sweats – Nathaniel Rateliff & The Night Sweats
10. Heems — Eat Pray Thug
9. Erykah Badu — But You Cain't Use My Phone
8. Thundercat — The Beyond / Where The Giants Roam
7. BORNS — Dopamine
6. Diamond Rugs — Cosmetics
5. Leon Bridges — Coming Home
4. Donnie Trumpet & The Social Experiment — Surf
3. Tame Impala — Currents
2. Courtney Barnett — Sometimes I Sit And Think, And Sometimes I Just Sit
1. Kendrick Lamar — To Pimp A Butterfly

Every year, there seems to be an album or two that are kind of transcendent in the sense that, no matter how sheltered a person is or in what direction his/her musical taste typically leans, everyone seems to agree upon.

Kendrick's Thundercat-filled To Pimp a Butterfly masterpiece is definitely one of those albums. To a much lesser extent, the same can almost be said for folks like Courtney Barnett and Tame Impala.

But, let's face it, that kind of this is far from the norm. One of my favorites from this year, the superb sophomore effort from Americana-leaning bar rock supergroup Diamond Rugs, is one that the year-end list aggregator Album of the Year says appeared on exactly zero year-end lists this year. Meanwhile, the solo record from ex-Das Racist emcee Heems was similarly overlooked in my book. (Same with Pete's book on both of these cases, actually.)

Elsewhere, old-timers like Willie Nelson, Mere Haggard and George Strait proved they've got plenty left in the tank, Kacey Musgraves and Sam Outlaw proved country music doesn't have to be god-awful in 2015, and Sleater-Kinney, Speedy Ortiz and Chastity Belt proved that the girls rocked way harder than the boys this year. — Cory Graves