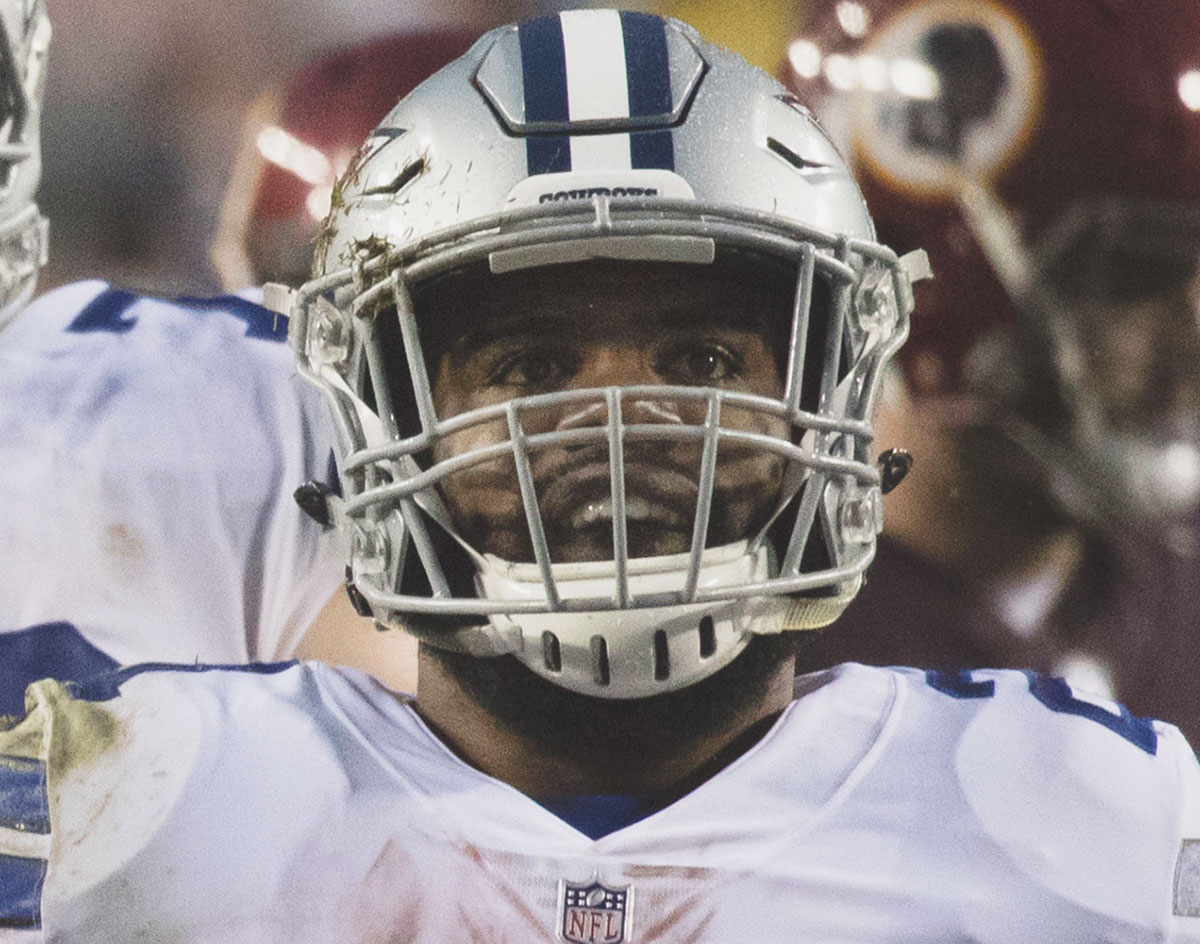 That’s now how these things are supposed to work.

In Elliott’s eyes, the issue is that he isn’t getting paid as much as he thinks he should be. With two years remaining on a rookie contract that’s set to pay him $3.9 million this year, he’s seeking a new, long-term contract from the team.

But should the Cowboys really back up the Brinks truck for their star running back?

As has been the case throughout his career, Elliott’s on-field production is muddied some due to his frequent issues off the field. Earlier this summer, Elliott was investigated by the NFL for an incident in which he was caught on camera shoving a security guard at a Las Vegas music festival. Ultimately, the NFL decided not to suspend the rusher this time around, but the possibility of Elliott being forced to once again sit out some of the Cowboys’ games due to an off-field mishap feels like a perpetual concern.

Given all that, it’s not hard to understand why the team might be hesitant to invest heavily in its star running back’s future.

Still, even with all that aside, there’s another key reason why the Cowboys might not want to spend significant money on Elliott. Truth is, running backs just aren’t nearly as important to the game as they were back in ’95-’96, when the team rode Emmitt Smith to the Cowboys’ last Super Bowl victory.

In fact, it’s been more than 20 years since the NFL’s Super Bowl winner had the league’s leading rusher on its roster. The last time this happened was in the 1998-1999 season, when the Denver Broncos rode the back of 2,000-yard rusher Terrell Davis to the title.

Just as interesting, it’s been 15 years since the Super Bowl-winning team even had a top-five rusher in its backfield. While a number of Super Bowl losers have had top-five rushers on their teams since then, the New England Patriots’ Super Bowl XXXIX victory, which came at the end of a season in which running back Corey Dillon finishing third in the league in rushing, stands as the last time when the league’s champs so heavily featured a single running back in their offense.

How? Well, 12 teams that make the playoffs each year in the NFL, and only three of last year’s 12 playoff teams had a top-10 rusher on its team: the Dallas Cowboys, the Los Angeles Rams and the Seattle Seahawks. It’s worth pointing out that, while Rams indeed made the Super Bowl, they did so with their stud running back Todd Gurley banged up for the entire postseason and with replacement runner C.J. Anderson taking the bulk of the team’s playoff carries. A little arithmetic tells us that 31.25 percent of teams in the NFL will have a top-10 rusher and that just 25 percent of the league’s playoff teams last year had one, suggesting that having a top-10 back bore little weight in whether a was any more or less likely to make it to the postseason. A player like Ezekiel Elliott ight carry the ball a lot and make impressive plays on the field, but having a player of his skill level simply doesn’t mean his team is more likely to win games.

In each of his three seasons in Dallas, Zeke’s Cowboys have been an above-.500 team, which could be used as anecdotal evidence that Elliott does help the team win. The same could be said of the fact that, in Elliott’s two non-suspension-shortened seasons, Dallas won 10 or more games.

Consider, though, that 2014 Cowboys had an elite rusher too in DeMarco Murray. The team won 12 games that year and then let Murray go in the following offseason, betting that its offensive line had more to do with the team’s rushing success than Murray did. While Dallas fell to 4-12 the next season, that really had far more to do with quarterback injuries than anything else: Tony Romo started four games and the Cowboys went 3-1 before an injury ended his season; also-rans Matt Cassel, Kellen Moore and Brandon Weeden combined to start the team’s other 12 games, during which Dallas went 1-11. Still, the rushing game was just fine throughout the year, with Darren McFadden racking up a 1,000-yard season behind the beefy O-line.

The following year, the Cowboys welcomed both Elliott and quarterback Dak Prescott into its fold. Again, stability at the quarterback position had much more to do with the Cowboys’ success that year than Elliott’s impressive ground game contributions did. Obviously, Elliott’s play wasn’t hurting the team, but it’s easy to imagine the team still winning double-digit games that year with someone else getting his carries.

While the Cowboys’ have indeed built an offense that revolves around the running game, Elliott shining bright isn’t necessary for the game plan to work. The offensive line, however, is another story. Last year, even with All-Pro center Travis Frederick out for the season, the Cowboys’ line ranked eighth in Football Outsiders’ adjusted line yards stat, which attempts to show how many rushing yards were created by the offensive line independent of the running back behind it. In fact, in the two stats Football Outsiders uses to determine what amount of yards the running back created, Dallas ranked ninth in average second-level yards (runs that are five to 10 yards past the line of scrimmage) and 14th in average open-field yards (runs over 10 yards beyond the line of scrimmage). When you try to zero in on what percentage of rushing yards the Dallas running backs (mainly Elliott) produced, it becomes clear just how much the line factors into the team’s success on the ground.

With Frederick healthy and back in action this season, the offensive line should only perform even better. And if that unit can return to form as a top-five offensive line in terms of adjusted line yards, do they really need to invest big money into whatever running back is running behind that line?

Jerry Jones isn’t so sure. Earlier this week, the Cowboys’ owner too went on the record saying teams don’t need rushing champions to win a Super Bowl. He’s right: As noted above, there’s been no positive correlation between having a top-five rusher and winning a championship in the last 15 years of NFL play. And because the NFL has a hard salary cap that teams can’t go over, putting big money behind a position that doesn’t have a proven relationship to winning is bound to hurt teams in other ways — especially since Dallas is about to need every inch of its budget to pay quarterback Dak Prescott, wide receiver Amari Cooper and offensive lineman La’el Collins when their own contracts expire soon. It would be virtually impossible for the Cowboys to pay all four guys what they each believe they’re worth.

But what might the Cowboys’ future without Elliott look like? Well, last week, Dallas signed free agent running back Alfred Morris to a modest deal. Morris, you no doubt recall, served as a backup and occasional starter for Dallas during Elliott’s first two years. He’s a fine back, a guy with multiple 1,000-yard seasons on his resume. More than that, he represents the best bargaining chip that the Cowboys have. NFL rules state that Elliott has to report to Oxnard for training camp by August 6 or he’ll have to wait an extra year before becoming a free agent, hitting the open market in 2022 rather than 2021. If Elliott decides that holding out for a new contract is worth that potential wait, this drama could drag on for an extended period of time. On the other hand, if Morris ends up playing with the first-team offense in the preseason and is able to put up remotely decent numbers behind a stacked offensive line, Elliott’s leverage starts to dissipate.

History tells us that elite running backs don’t make teams elite. That the Cowboys have enjoyed a few years of success with the NFL’s leading rusher on their team may seem to contradict that, but the league’s best offensive lines and a stable quarterback situation have to be factored into the equation, too.

Fact is, the Cowboys don’t need Elliott — not on the bloated contract he’s angling for before his more digestible rookie deal expires, at least. As soon as Elliott’s contract begins to interfere with how the team allocates funds to other positions, the notion of signing him to a long-term deal can be easily a potential liability.

I can’t believe I’m saying this, but Jerry Jones is right about this one. The possibility of the Cowboys winning a Super Bowl doesn’t hinge on over-paying a running back — even one as talented as Zeke.