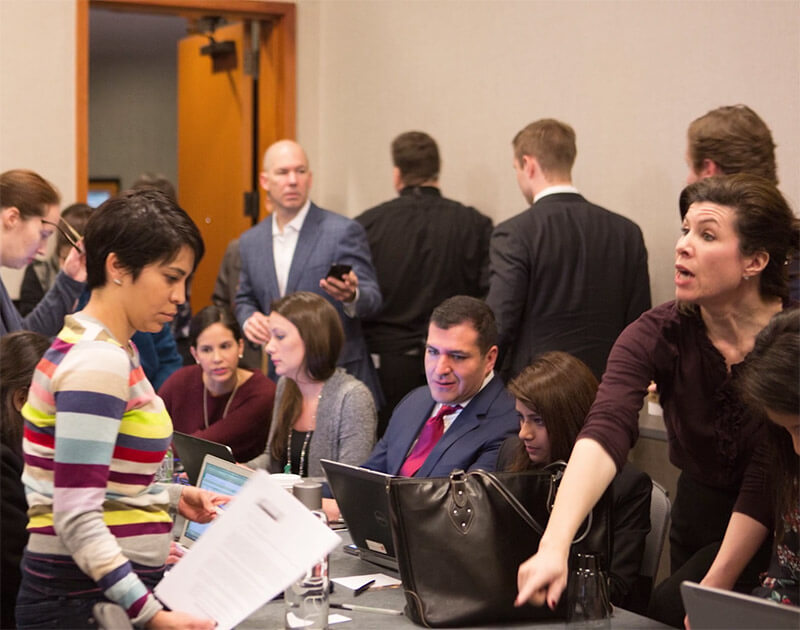 One Dallas Filmmaker Was Given Full Access To The Impromptu War Room Dallas Lawyers Set Up At DFW Airport To Fight President Trump’s Travel Ban. This Is His Film.

In late January, when President Donald Trump signed an executive order banning travel into the United States by residents of seven Muslim-majority nations, Dallas residents of all stripes rushed to Dallas-Fort Worth International Airport to let their displeasure in the decision known.

And, although it would take time, the voicing of those concerns would prove effective, thanks in no small part to the efforts of some 150 Dallas lawyers who formed an impromptu law firm — an entity now known as Lawyers 4 America — to fight the ban.

As those lawyers fought to defend the constitutional rights of those travelers, filmmaker Allan Thompson of the North Texas-based video production company One:Eight Productions became inspired to document their efforts.

“The weekend after the Executive Order was handed down, my wife and I were out of town on another shoot,” Thompson now says. “I was watching the news of protesters gathering at DFW, and I wished that I could be there. I knew something was happening that was history in the making. Unfortunately, I missed the big protests, but when I got back, I had the sense that this was a huge story — but I also knew that the local news would be gone as soon as they got their soundbites. I am a journalist by training. and I wanted to dig deeper into what was happening.”

And so he reached out to Chris Hamilton, one of the lawyers leading the charge, and asked if he could record the law team’s efforts for posterity.

“I told him this was history and we needed to record it — with no idea how it would be used,” Thompson says. “And, for some reason, he went for the idea. So he gave me access to his team, and I just started shooting. I was completely inspired by their passion and willingness to pass on billable hours to help these people being detained and to make sure the Constitution was protected.”

Now, Thompson is ready to share the fruits of those efforts in the form of a nine-minute short film called The Order. As with most of the efforts surrounding this fight back against the travel ban, the clip is a heartening watch, many thanks to the can-do spirit on display by such featured lawyers as Hamilton, Angela Hunt and Lisa Blue, and the thrilling way in which these many Dallas citizens gathered to form a unified front.

Adds Thompson of the footage he was able to compile: “”My passion is telling stories of people who are changing the world, and this group of lawyers was working to do just that. The kicker is that my wife and I live in Grapevine. How often is history made five minutes from your house? I knew I had to grab my camera and do something.”

You can watch The Order in full below.