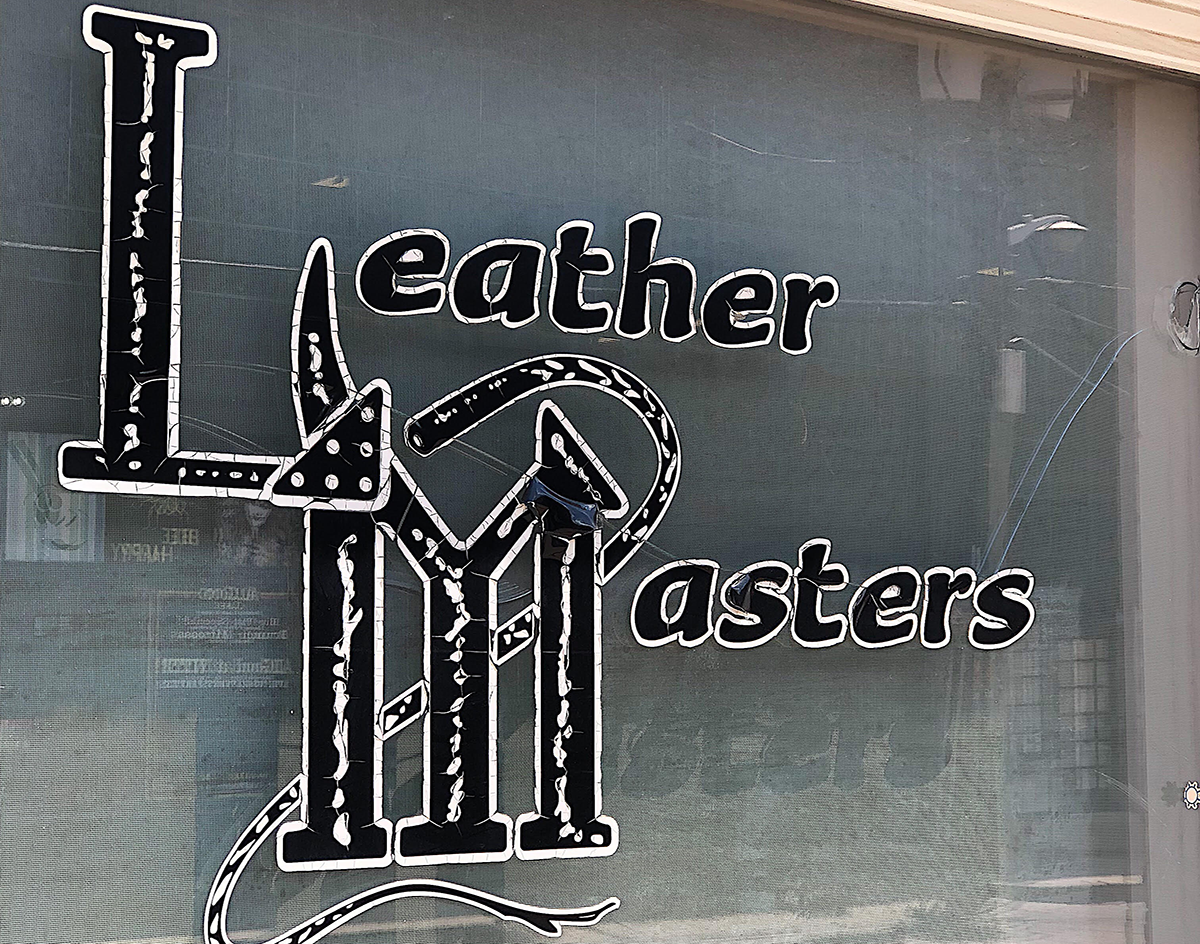 For A Number Of Reasons, Including Repeated Vandalization And Corporate Overlord Takeover, Leather Masters Is Worn Out By Deep Ellum.

All photos by Alec Spicer.

Update at 2:12 p.m. on February 10, 2020: In a profile in the Dallas Voice, Leather Masters’ owners have confirmed that their shop will open up a new location near the intersection of Northwest Highway and I-635 near Dallas’ border with Garland after its Deep Ellum spot closes in the next few months. Original story follows.

There are a few truly strange shops still standing that have contributed to Deep Ellum’s spirit in the past couple decades. Leather Masters, with its rainbow flags draped above the doorway and photos of leather-adorned muscle men proudly displayed in the windows, is undoubtedly one of them.

Nearly two decades ago, David Carranza closed his leather fetish stores in San Antonio and Allentown, Pennsylvania and uprooted his business to Deep Ellum, where he acquired the building that housed Leather-by-Boots for 35 years. But will his Leather Masters business last much longer in its longtime home?

Carranza and his two business partners — Markus Leather (who owns the building) and Dee Leather — say they too have heard recent rumors in the community of the store possibly closing. But the oddball spot on Main Street adjacent to AllGood Cafe isn’t closing — it’s just moving.

“I think the biggest thing is I’ve seen a huge change in the crime and the graffiti and the vandalism just in the past year,” Dee says. “We’re graffitied once a week.”

Markus says homeless people are consistently trashing or relieving themselves along the side of the building, leaving it up to Leather Masters’ staff to clean it up.

“We decided we were going to move out of Deep Ellum and try to find a better location that’s more fitting for the atmosphere,” Markus says. “And honestly, we’re all sick and tired of the bums.” 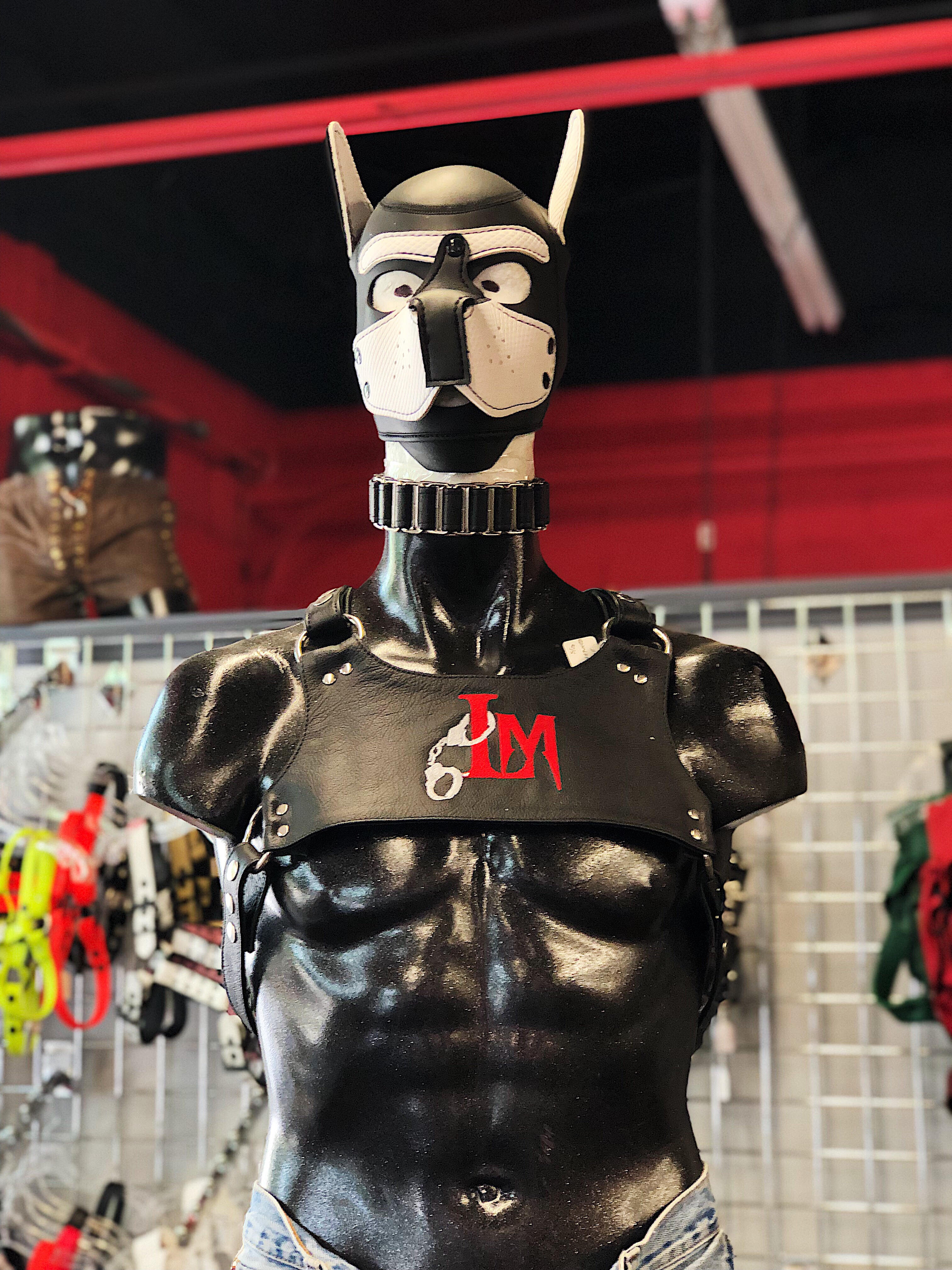 The crowd in Deep Ellum isn’t what it used to be when Leather Masters moved in, something the trio of owners mention as another reason that pushed them in the direction of moving and putting their building up for sale. What used to be small mom and pop shops have largely been replaced by corporate, high-end shops and apartments, all of which have driven the regular clientele of Leather Masters out of the neighborhood.

Dee says despite the rumors, there’s no way Leather Masters would close its doors for good, as there’s a never-ending need for leather, whether you’re active in the leather community or not.

Leather Masters is that kinky shop you curiously stumble upon, or probably popped into during a Deep Ellum Wine Walk. But it’s not a sex shop ­— it’s a fetish shop that specializes in custom-made leather fetish wear. The store carries everything from bondage kits, puppy plays masks, slings, collars and clothing, all of which are made in-shop and are displayed on metal cages. And that’s not even half of everything you’ll find in Leather Masters’ warehouse-like environment. 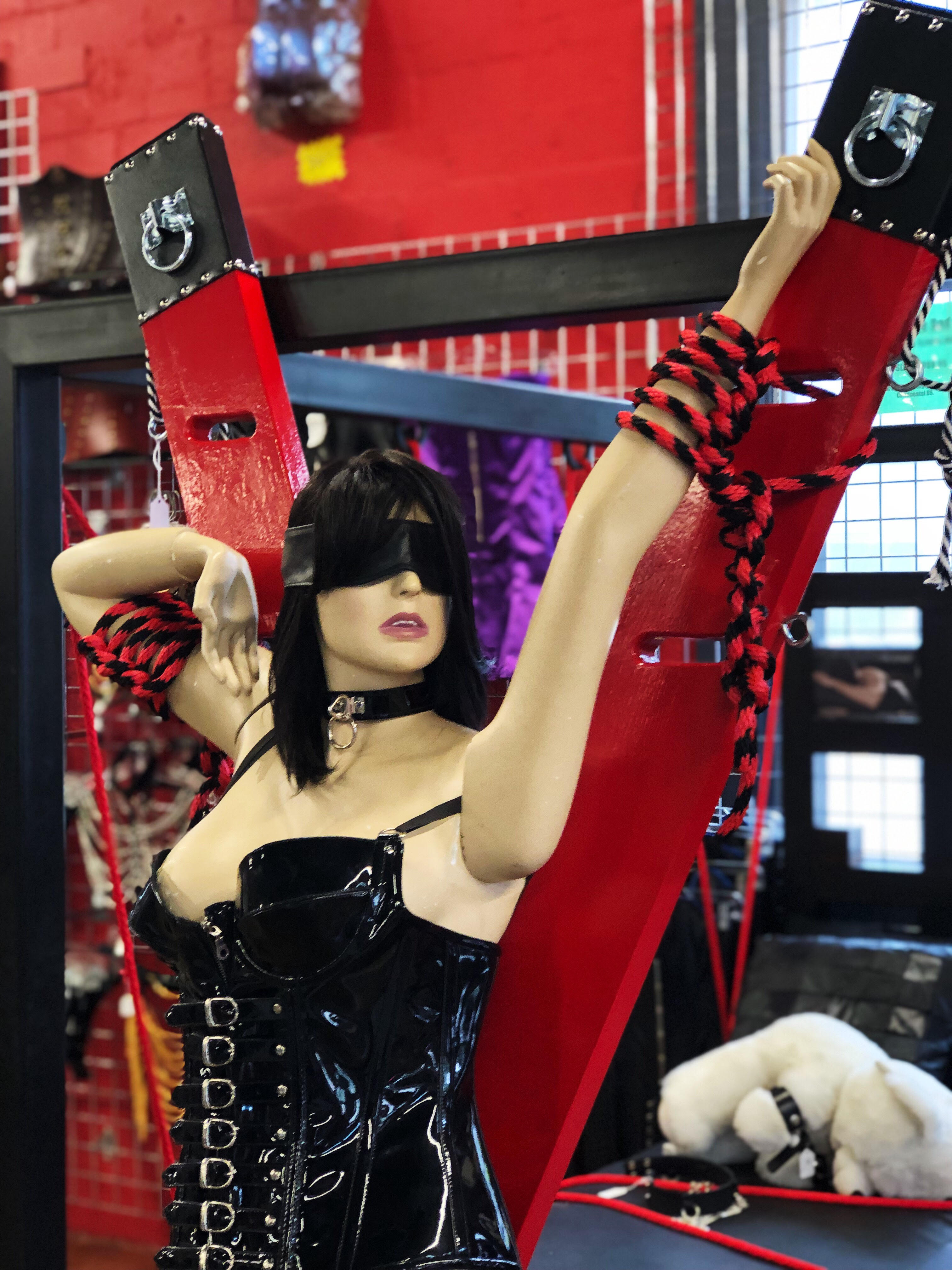 Behind black curtains toward the back of the store hangs an “employees only” sign. A staff of cutters, finishers and sewers handcraft all the products emblazoned with the store’s trademark.

“Tally right here just recently learned what she was sewing together,” Dee says of one of the crafters.

In 1989, Carranza and Tony DaCosta founded Leather Masters to provide the LGBT community with high-quality leather products during the rise of the leather subculture community. They began operating from their garage and selling their products at community events and bar gatherings until they opened their first retail store in San Jose, California in 1991. 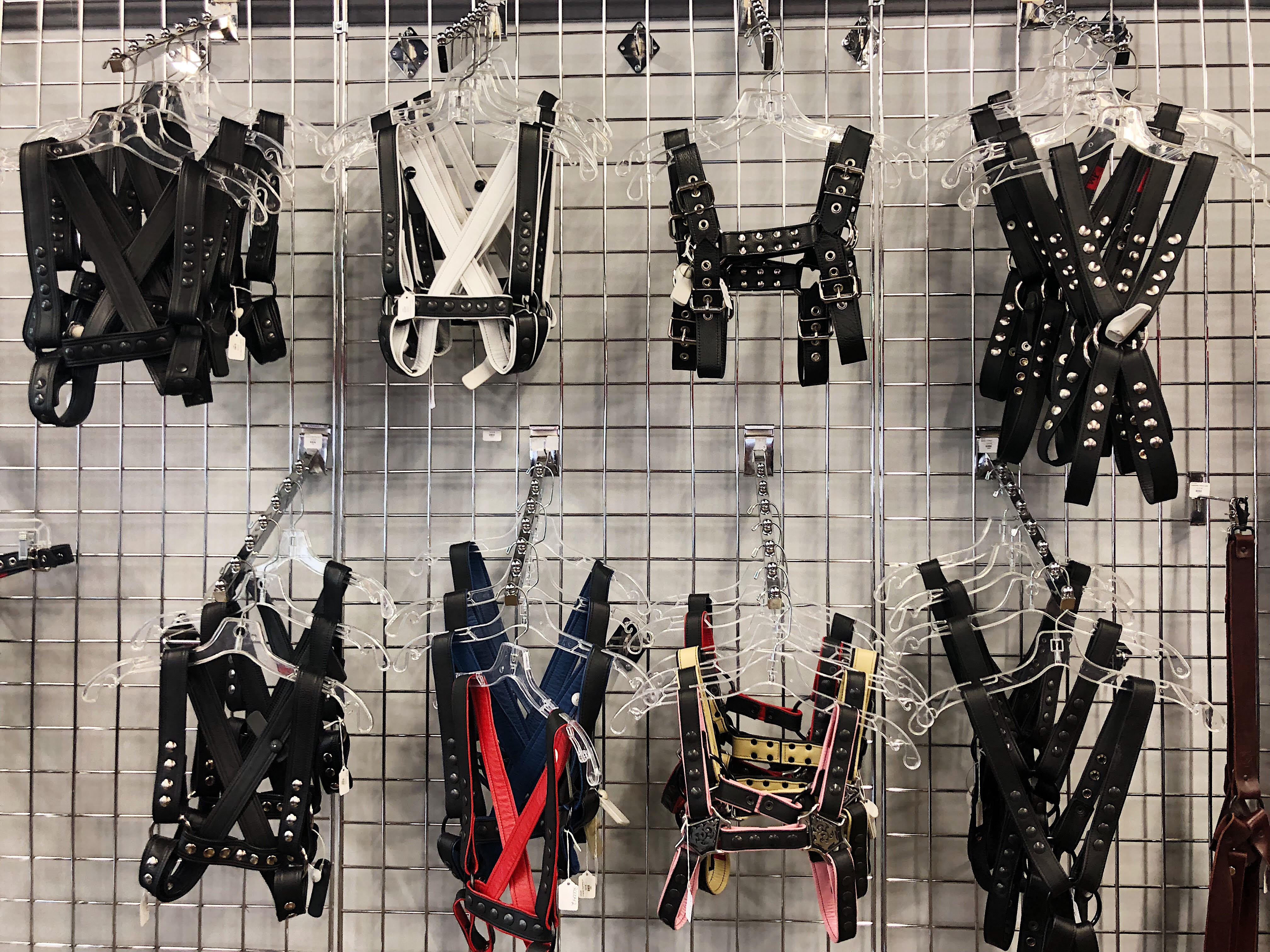 “Handkerchiefs are what [the leather community] used to use – it was code,” Dee says. “You knew what someone was into by which [colored] handkerchief they had so that they could operate kind of in secrecy, but still communicate with each other.”

Carranza was also selling products at The Eagle, a bar in San Antonio, and had a retail shop in Allentown. Eventually, he ran into problems with the city of Allentown, and around the same time found out The Eagle was closing. It was at this time that a Dallas leather store called Leather-By-Boots contacted him about buying the business. Carranza agreed, and acquired the entire Leather-By-Boots production line. In 2005, with a new manufacturing facility, he opened his second Leather Masters opened in the Deep Ellum. 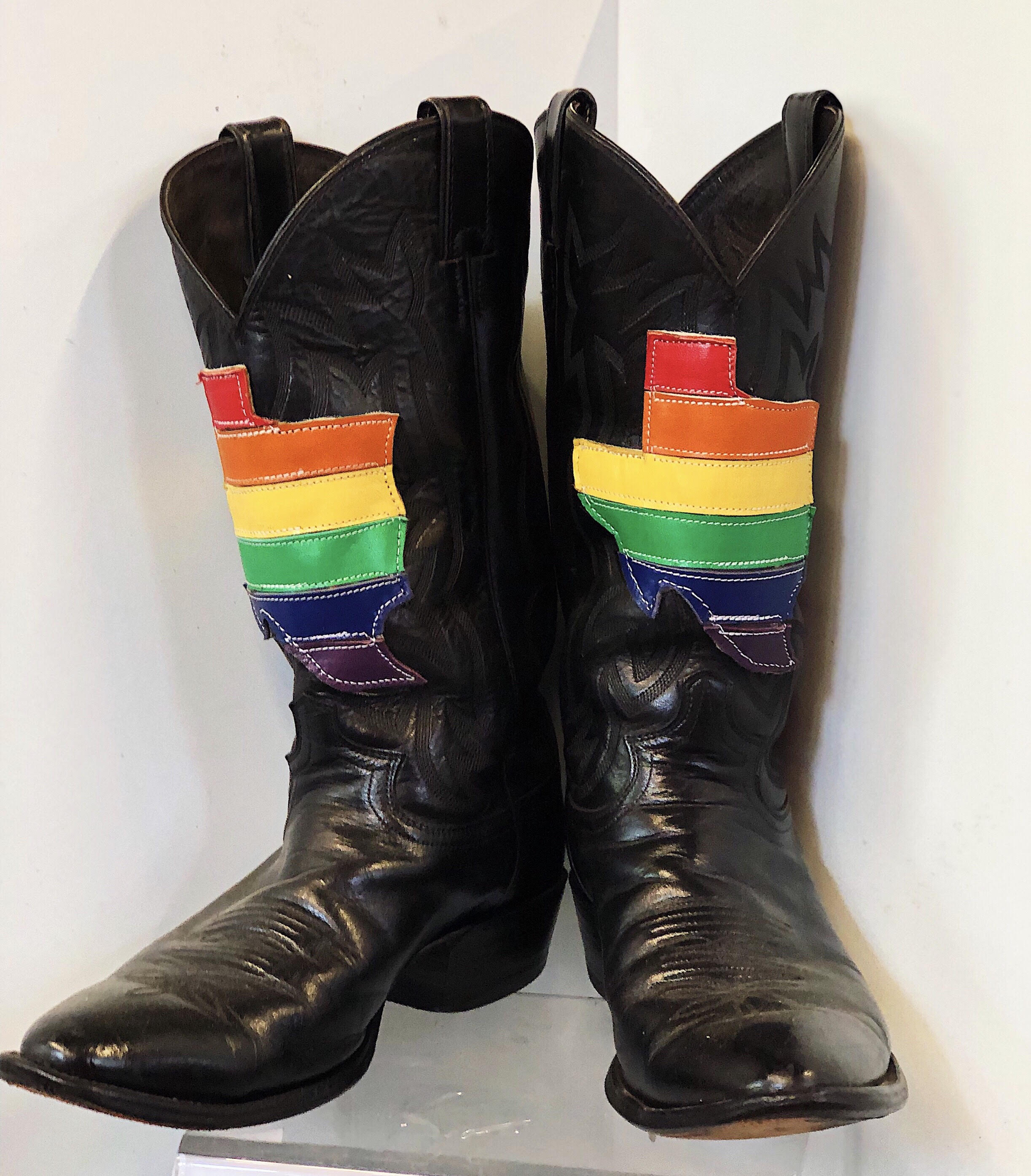 At the time of his shop’s arrival, Carranza says, Deep Ellum was more eclectic.

“People didn’t care if you were gay, straight, bisexual, [or] punk rocker, everybody was welcomed,” he says. “You’d see someone walking down the street in drag or someone with a wild color hair and nobody cared, no one judged them.”

But even in a changing neighborhood, the team behind Leather Masters has maintained the judgment-free mindset that welcomed it to the neighborhood nearly 15 years ago. And while they don’t know where in Dallas the shop is headed next, the owners know their community will follow them.