The Dallas Minister Standing Up To Robert Jeffress. 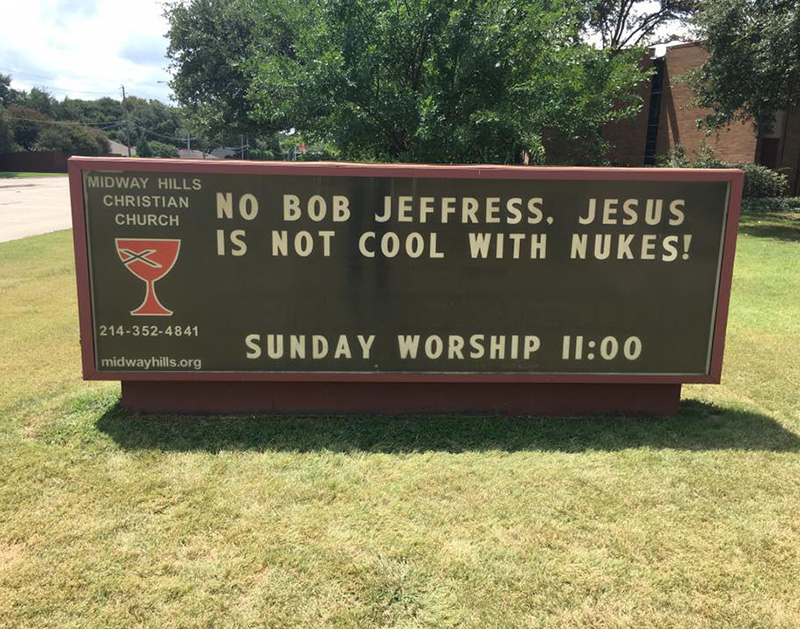 A Dallas Minister Is Calling Out Robert Jeffress After The Mega Church Leader Voiced His Support For Donald Trump’s Aggressive North Korea Statements.

Earlier this week, perpetual North Texas embarrassment Robert Jeffress, the pastor of the First Baptist Dallas church, once again made national headlines — this time for saying that God has given permission to Donald Trump to “take out” North Korean leader Kim Jong Un after the president said any potential nuclear attack from North Korea would be met with greater force.

But, let’s be clear here, just because Jeffress is based here in Dallas doesn’t mean that he speaks for the city at large, let alone all of its Christians. In fact, in the wake of Jeffress’ statement in regards to Trump’s foreign policy positions, at least one other Dallas pastor is going out of his way to show that at least some Christians in Dallas aren’t all aboard the nuclear war train.

Yesterday, Midway Hill Christian Church minister Arthur Stewart took to Facebook to share a message for Jeffress that he’d posted to his church’s marketing sign. Read his message? “No Bob Jeffress, Jesus is not cool with nukes!”

Stewart, who has been the minister at Midway Hills for about five years now, says his statement very much was meant as a way to voice the concerns of Christians in Dallas that Jeffress does not represent.

“I was terrified when I heard what he said, to be honest,” Stewart says when reached by phone this morning. “Dr. Jeffress and I have a different code of ethics when it comes to conflict, but I know that Jesus didn’t cry for the dogs of war when he was crucified.”

Furthermore, Stewart says he’s sick of how Jeffress is represented as some sort of voice for Dallas’ Christian community.

“When anything of significance in Christianity comes up in Dallas, Jeffress is always sought out for interviews with the mainstream media,” Stewart says. “Before gay marriage was legalized, I co-officiated a large gay wedding — and they still went to Jeffress. That’s why it was news.”

Stewart says he hasn’t gotten any criticisms from his 300-member Midway Hills church for the sign. But online reaction to his move has been a whole other story. On one side of the aisle, Stewart is being lambasted by critics who claim he doesn’t know the Bible, which boasts more than a few verses about punishment and destruction. On the other side, Stewart, who identifies himself as a gay man, has been bizarrely called out as a homophobe.

For his part, Stewart is taking all of that vitriol in stride, saying that he simply wanted to present a counter-argument to Jeffress’ message of hate.

“Despite the fact that it’s a direct call-out, it should not be construed as a personal attack,” Stewart says. “It’s simply to say that [Jeffress] has a responsibility with the direct power in his reach: Do not let people live in fear, and do not let people who are not yet afraid begin living in fear.”

“We’re going to continue to speak truth to power, especially when there’s the threat of destruction,” Stewart says. “God loves North Koreans as much as he loves the folks at First Baptist Dallas, and we will continue to speak out against that which puts empire over the grace and the resurrection of Jesus Christ.”