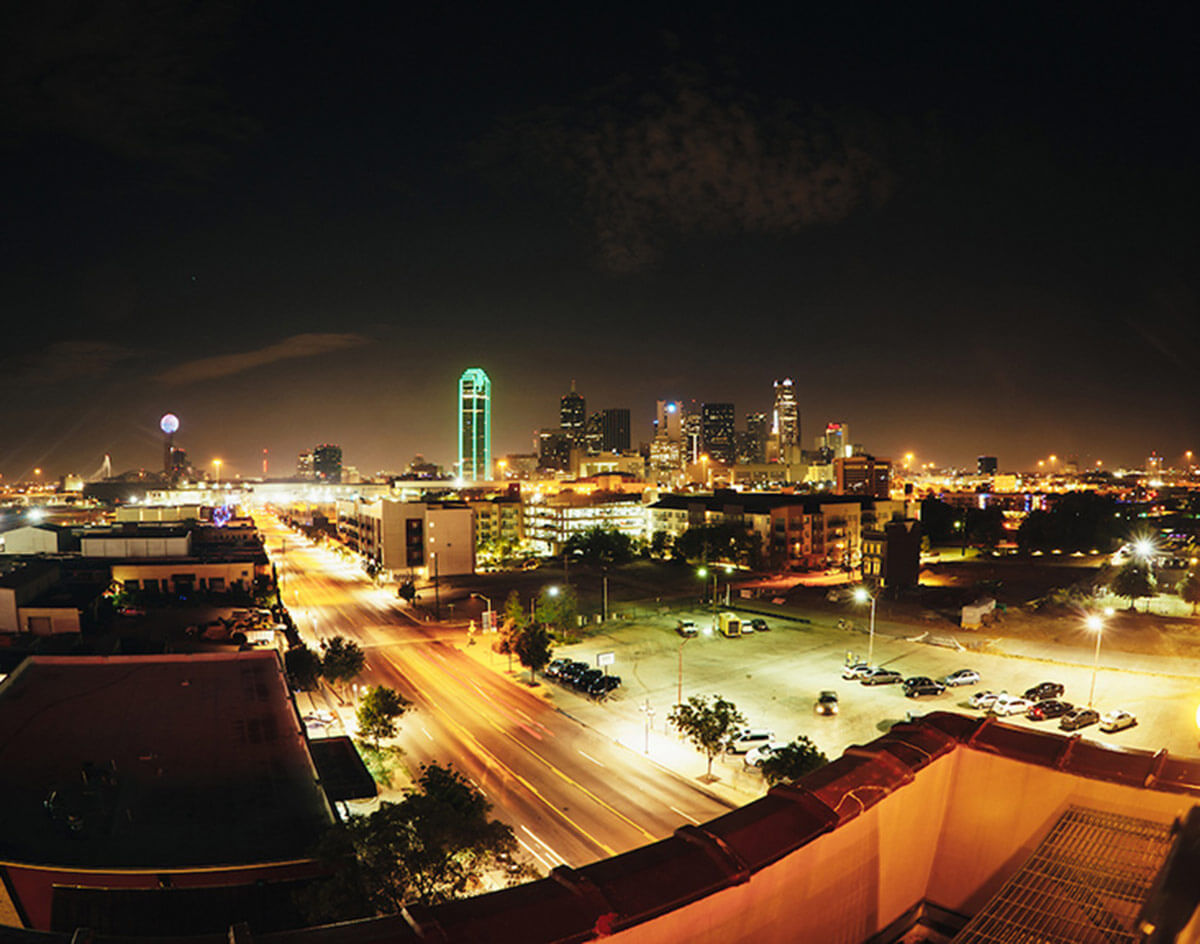 For years, the official slogan for the city of Dallas was “Live Large, Think Big.” More recently, though, the city opted to go with the fresher sounding “Dallas: Big Things Happen Here.”

Regardless of however the city wants to present itself to outsiders, we know the real truth about Dallas: The eighth-most populous city in the United States has a long — and, dare we say, pretty awesome — history of big ideas, big events and even bigger personalities.

We’ve seen this much play out time and time again while doing research for our recurring Songs About Dallas feature. In the 172 years since John Neely Bryan first settled near the Trinity River, our city has birthed a long lists of famous athletes, inventors and record holders, and accomplished various feats that have made us the first, the biggest or the best at a number of things. In short, our amazement related to each new fascinating discovery, weird tidbit or odd historical footnote we’ve stumbled upon in the last several months has been pretty endless.

So, to that end, we’ve put together a list of the most interesting things we’ve learned about this rather remarkable city of ours. And there are a lot of those, turns out.

1. The lowest grossing film of all time had its premiere in Dallas in 2006. Zyzzyx Road, starring Katherine Heigl and Tom Sizemore, had only six paying customers and earned only $30 at the box office.

2. Contrary to its name, the German Chocolate Cake is actually not German at all. The first recipe for the cake appeared in a Dallas newspaper in 1957. One of its ingredients, a sweet baking bar, was named after its inventor Sam German of Baker’s Chocolate Co.

3. Twenty percent of the Okapi in the U.S. and Japan were either born or bred at the Dallas Zoo.

4. Frustrated with standing in line at banks, Dallasite Don Wetzel went on to patent the first automated teller machine in 1968. Before that, his Irving-based company manufactured automated baggage handling equipment for airports.

6. Deep Ellum is a reference to the Elm Street. Influential blues musician Huddie “Lead Belly” Ledbetter’s “Take a Whiff on Me” was one of the earliest popular songs to use the word Ellum to refer to Elm Street.

8. The Dallas Zoo opened in 1888, making it the first zoological park in the entire Southwest. But, yes, the Fort Worth Zoo is still better.

9. Dallas seminary student Michael Clegg is credited with coining the term “Ecstasy” for the popular club drug MDMA. By 1984, he was selling over 500,000 doses of the drug per year, using advertising and a 1-800 number to place orders. The drug’s popularity with Dallas clubgoers lead to local discotheque The Starck Club becoming known as ground zero for the drug’s popularization in the ’80s.

10. In 1918, there was no State Fair of Texas. That year, the U.S. military used the fairgrounds as an aviation training facility called Camp Dick.

11. In 1944, White Rock Lake served as a Prisoner-of-War camp for German non-commissioned officers captured during Erwin “The Desert Fox” Rommel’s North African campaign. They were treat so well, though, that at least one POW wrote a letter to the Dallas Morning News to ask if they could sponsor him and his family in their bid to move to Dallas.

12. Dallas resident Lamar Hunt and son of oil tycoon H.L. Hunt is a member of three national sports hall of fames (soccer, football and tennis). The former owner of the Dallas Texans (now the Kansas City Chiefs) will be most remembered, though, for coining the term “Super Bowl.”

13. The Dallas Zoo’s Wilds of Africa exhibit was the first in North America to mix elephants and other species in the same habitat.

14. Established in 1899, the Dallas Country Club not only helped introduce the city to the sport of golf; it also became just the second country club opened in the entire country. It was the first in Texas, too.

15. In 1987, Dallas DJ Jeff Liles became the first person to air NWA’s “Boyz-n-the-Hood.” As it turned out, it would be the last edition of his “Life is Hard” radio show aired on KNON. He was fired the next day for potential FCC violations.

16. Before making his State Fair of Texas debut in 1952, Big Tex served for two years as the world’s largest paper mache Santa Claus in Kerens, Texas. May he rest in peace.

17. In 1888, Dallas got its first professional baseball team. The Hams, as they were called, played in a stadium located in Oak Cliff.

18. Woodrow Wilson High School is the only public high school in the country to have graduated two Heisman Trophy winners. Davey O’Brien and Tim Brown. Steve Miller of the Steve Miller Band went there, too. So did ZZ Top bassist Dusty Hill.

19. In 1910, prostitution was legal in Dallas in the red light district known as “Frogtown.” Woodall Rogers Freeway stands there today.

21. One in every 131 Dallasites is likely to become the victim of a violent crime.

22. Established in 1970, the Dallas-based lighting and sound company Showco is credited with inventing stage monitors and other advancements in the field of pro audio. The company more or less helped birth arena rock in the process.

23. Woodrow Wilson High School contains a piece of cake from the wedding of President Wilson’s daughter, Jessie. The cake is built into the building’s cornerstone.

24. Not only have the Dallas Cowboys cheerleaders made more overseas trips to entertain U.S. troops over the last 25 years than any other entertainer or group, but they pull in an additional $1 million in revenue for the team through appearances and endorsements. They have a reality show, too, of course.

25. Seen year-round in Fair Park, the Texas Star Ferris wheel is the largest of its kind in the western hemisphere. Because the owners of the Texas Star Ferris wheel, a private family, are required to be on site the whole time the ride is operational, an efficiency apartment was built underneath the ride, where two of the family’s members reside during the State Fair of Texas’ run.

26. Internationally, the 1980 “Who Done It?” episode of Dallas holds the record as the most-watched television episode in history. 360 million viewers tuned in to find out who shot J.R.

27. Opened in 1956, Dallas’ Statler Hilton was the first hotel to feature elevator music and a television set in every room. It was also the place where Tina Turner was staying when she decided to divorce her husband Ike.

28. The first publicized account of the legend of the Lady of White Rock Lake was Anne Clark’s “The Ghost of White Rock,” which was included in the Texas Folklore Society’s 1943 publication Backwoods to Border. Since, dozens of similar tales about the Lady have spawned.

29. At 26 years and counting, the Motel 6 jingle created by Highland Park High School graduate Tom Faulkner, is the longest running commercial campaign in history. The musician, who played in popular Dallas bands The Oracle, the Coconuts and Flyer in the ’70s and ’80s, is also responsible for that ever-infectious Chili’s baby back ribs jingle.

30. Opened in 1927, the Dallas-based Tote-Em company was one of the first country’s first convenience store chains. In 1946, the store changed its name to 7-Eleven to reflect their new longer hours. Today, the company has roughly 10,000 more locations than McDonald’s, spread across 16 countries.

31. Nobel Prize-winning physicist Jack Kilby helped create the world’s first integrated circuit computer chip (which later became the microchip) in 1958 while working at Texas Instruments. He is also credited with the inventions of the first handheld calculator and the thermal printer.

32. At 385 square miles, Dallas is the core of the largest metropolitan area in the nation not located on a navigable body of water.

33. Dallas is home to the largest Korean community in Texas and the second in the entire South behind only Atlanta.

34. No one is quite sure who invented the margarita, but one of the most widely-held beliefs is that Dallas socialite Margaret “Margarita” Sames was the first to come up with the popular concoction in 1948. She was looking for a drink to serve at her holiday party. And, lest we forget, it was Mariano Martinez of Dallas-based restaurant Mariano’s Hacienda that invented frozen margarita machine in 1971.

35. The Dallas Public Library permanently displays one of the original copies of the Declaration of Independence, printed on July 4, 1776. The library also boasts the First Folio of William Shakespeare’s “Comedies, Histories & Tragedies.”

36. Statistics show that wind speeds in Dallas are actually higher than in the “Windy City” of Chicago. Dallas is also home to four times more restaurants per capita than New York City.

37. Dallas is home to more places to shop per capita than anywhere else in the world. Guess that makes us the official Shopping Capital of the World?

38. Flower Mound company Funimation is the entity responsible for bringing the Anime series Dragonball Z to America in 1998.

39. Known as “The Wizard of Dallas,” inventor Henry Garrett brought Dallas the first automobile dealership in the state and the first automatic traffic signal in the country. Other of his illustrious credits include founding radio station WRR and inventing an electrolytic carburetor that allowed cars to run on water.

40. While filming his 1991 film JFK, director Oliver Stone paid $4 million to restore Dealey Plaza to 1963 conditions for the movie. He paid an additional $50,000 to be allowed to film from Oswald’s exact perch in the school book depository building. And, even then, he was only allowed to have five crew members on site at any given time.

41. Kelcy Warren, the Dallas billionaire who donated $10 million to name the city’s Klyde Warren Park after his son, stipulated in the contract that the city help teach the park’s nine-year-old namesake the weight of civic responsibility by requiring him to help clean up the park at least once a month. And we complained about having to take the ttrash to the curb as kids.

42. For the 15 years between 1821 and 1836 that North Texas was under Mexican rule, present-day Dallas was located in the Mexican state of Coahuila y Tejas.

43. With more than a million annual visitors, the Dallas Farmers Market is the largest working farmers market in the entire United States.

44. According to Fortune magazine’s marketing research, more popcorn is consumed in Dallas-Fort Worth than anywhere else.

45. The Dallas/Fort Worth airport is larger than New York City’s Manhattan Island. It is also home to the world’s largest parking lot.

46. In an effort to make White Rock Lake a popular destination for residents, the city built a Bath House and Bathing Beach (complete with sand) in 1930. Following a severe drought in 1953, the lake was once again temporarily put back into service as a water supply and swimming was banned. The beach was never re-opened, and the ban remains in place to this day.

47. By bcWORKSHOP’s latest count, Dallas is home to 355 distinct neighborhoods and counting. But that’s always up for debate, of course.

49. Dallas’ 45,000 estimated Jewish residents give our city the biggest Jewish population of any in Texas.

50. Dallas County is home to 18 Fortune 500 Companies, including ExxonMobile, the world’s most profitable company. As of 2011, Dallas is also home to 17 folks on Forbes Magazine‘s list of the world’s richest billionaires. That places Dallas sixth worldwide among cities with the most billionaires, but that doesn’t include the eight billionaires who also live in nearby Fort Worth.