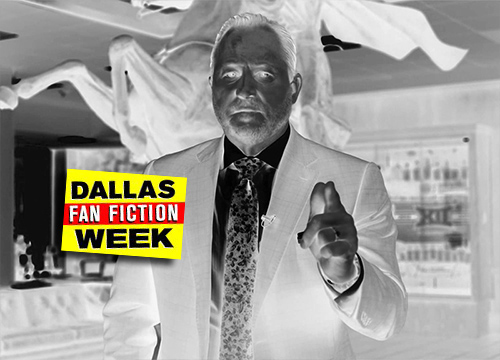 We all love stories. And sometimes those stories, even when fictitious, involve famous people. Which brings us to Dallas Fan Fiction Week. For the remainder of the week, we’ll post made-up stories that involve various Dallas celebrities — some written by our own staff and freelance crew, and others from some well-respected writers and personalities we reached out to from across the city. Why are we doing this? Honestly, there’s absolutely no reason, except for the fact that fan fiction is dope and we do dope shit.

“Another Keep-It-Real Moment.”
“Hey,” the man says, extending his hand out for a shake. “Let’s be friends.”

The locker room at King Spa isn’t the most appropriate place to strike up a conversation, I don’t think. People are getting undressed in here. Has this man no manners, no sense of decorum? I consider myself lucky to still have my pants on — and luckier that he’s at least wearing a towel.

I side-eye his hand, which is still lingering there in the air. I don’t take it. I leave it alone, hoping it will do the same to me.

It doesn’t, it stays there, and the face up behind it just keeps on smiling.

“I know you don’t know me. But don’t hate me before you know me. Give me a shot.”

Who is this man? Why is he talking to me? Why here, in the locker room of the traditional Korean-inspired spa that easily stands as Dallas’ weirdest landmark? Is this even real life?

Every Groupon has a catch, I figure. I squint at the man, wonder if he’s it.

“It’s almost baseball season, and you know what that means.”

I certainly do not, and I remain at a total loss for anything. His smile hasn’t subsided. His hand still hasn’t moved from its extended position. I start to pull my shirt back over my head.

“This is Bart Reagor,” the man continues. “Your friend in the car business. The Keeping-It-Real Guy.”

I don’t know who that is. I just keep standing there, saying nothing.

“I’m a Dallas guy, too,” he says, through his teeth. “I’m a Dallas-Fort Worth Metroplex guy, too. I grew up there.”

Something’s off. He said “there.” But we are there. We’re… here.

“I played high school sports here in the Metroplex and college football at Texas Tech for Hall of Fame coach Spike Dykes. He taught me a lot about integrity, trust.”

“Hey, do you like new stuff? Isn’t it great to be able to get onto the Internet and use that? You remember the old days when we didn’t have that?”

I’m getting worried. Everyone else that was in here is gone. This dude Bart and I are the only ones left.

“If I could save you time, save you money and get you any car you wanted, you’d probably like me.”

“Alright, now. You may not like me. This is Bart Reagor, the Keeping-It-Real Guy. I’m probably one of the best guys you’ve ever met. Just do me a favor: Give me a shot.”

He hasn’t really moved much since first appearing by my side. I can’t help myself from wondering what that’s about.

I can’t tell. Is he looking at me or through me?

I move my head a few inches to the left.

“Don’t be a hater before you know me. Let’s just keep it real together.”

He just keeps on talking. He doesn’t move his eyes. Nothing changes about his stance.

He’s still staring where my eyes were a moment ago.

“I’d like to tell you different, but I’ve got to keep it real.”

“I hate to tell you this, but I gotta keep it real.”

Suddenly, there’s a twitch. Or, well, I’m not sure. I think his shoulder might’ve moved.

Yeah, there his shoulder goes again.

“I’ve never won the lottery, and I’ve never been on a game show.”

His shoulder is bouncing at an almost mechanical rate. He appears to be… I don’t know… malfunctioning? People can’t do that, though. Right?

Is the pitch of his voice is changing?

“I’ve never flown around the world, and I’ve never sailed across the ocean.”

It is. It’s getting higher.

“I don’t throw a baseball 100 miles per hour, and I can’t slam dunk a basketball.”

“I’m not a professional athlete or an Olympian.”

His shoulder just keeps on twitching. Wait, did he also just disappear for a second?

“I’ve never starred in a movie and I’ve never performed in a rock band.”

He’s back now, but I can also kind of see through him, I guess? Like he’s a hologram?

“I’ve never won the Super Bowl or the World Series.”

I’m still weirded out, but I also have to admit disappointment. It’d be pretty cool to meet a champ. Maybe he’d let me try on his ring, y’know?

He kind of flickers for a second. Then he just… dissolves. He’s gone.

I move a few inches toward where he once stood. I waft my hand through the air. There’s nothing there. The locker room is empty. Silent.

Then there’s a sound. The door back to the lobby swings open. Some bald asshole wearing sunglasses and a leather trench coat — inside, mind you — stands in the doorway. He tells me his name is Morpheus.

He asks me if I feel like Alice tumbling down the rabbit hole. He tells me I live in a prison of my own mind. He says that there are forces beyond my control pulling all of the world’s strings. Then he offers me drugs — pills, to be specific.

I hang my head. Finally, I understand what’s going on. I break my silence: “This isn’t that kind of spa, man.”

“No, man. I’m not. But, either way, this really isn’t that kind of place. There are definitely places like that in this city, and that’s cool — I’m not trying to judge anyone or anything. But this place isn’t one of them. It just really isn’t. Now, if you would please excuse me.”

I walk past him, out of the locker room and over to the main reception desk. The kind lady there hears out my story and apologizes profusely for the awkward inconvenience.

She waves me off. She says she’ll kick Morpheus out and assures me that the spa will accept my Groupon at a later date. I tell her how that’s really cool of her, how I really appreciate it. Then I turn and head out the door, ready to put this whole weird experience behind me.

Soon as I get outside, though, I see this nerd pacing out front. He stops dead in his tracks when he sees me.

“Morpheus?” he asks, way sheepishly. “I’m Neo. From the Internet.”

King Spa is really great, I think to myself as I walk over to my car. But maybe I’m just not a spa guy after all.

• All Tay’s Exes Perform In Texas. On a serendipitous evening three of Taylor Swift’s ex-boyfriends perform in Dallas at the American Airlines Center. Yes, there is drama. Yes, there is bad blood.
• Out To Lunch With John Tesar and Matt McCallister. Two of Dallas’ most celebrated chefs have lunch… at a Taco Bell. James Beard award winner Alice Laussade’s hilarious story sheds a light on the chef’s “big” personalities.
• I, Nowitzki. Comedian Clint Werth pals around with Dirk Nowitzki, then steals his identity — and much to the chagrin of Tim Duncan.
• The Misadventures of Lo Down Loretta Brown. Ever wonder what it’d be like if Erykah Badu was a superhero? In this story she is; she’s Lo Down Loretta Brown.
• Too Old For This Chip. Frustrated at Dave for always exploiting them, the Chipmunks quit Hollywood, move to Texas and become the best ever death metal band in Denton.
• Dr. Phil’s Show of Revelations. Jerry Jones appears on Dr. Phil to unveil a big secret. But will anyone believe him?