Jaljuda Needs Your Laughs, And Also Your Kidney. 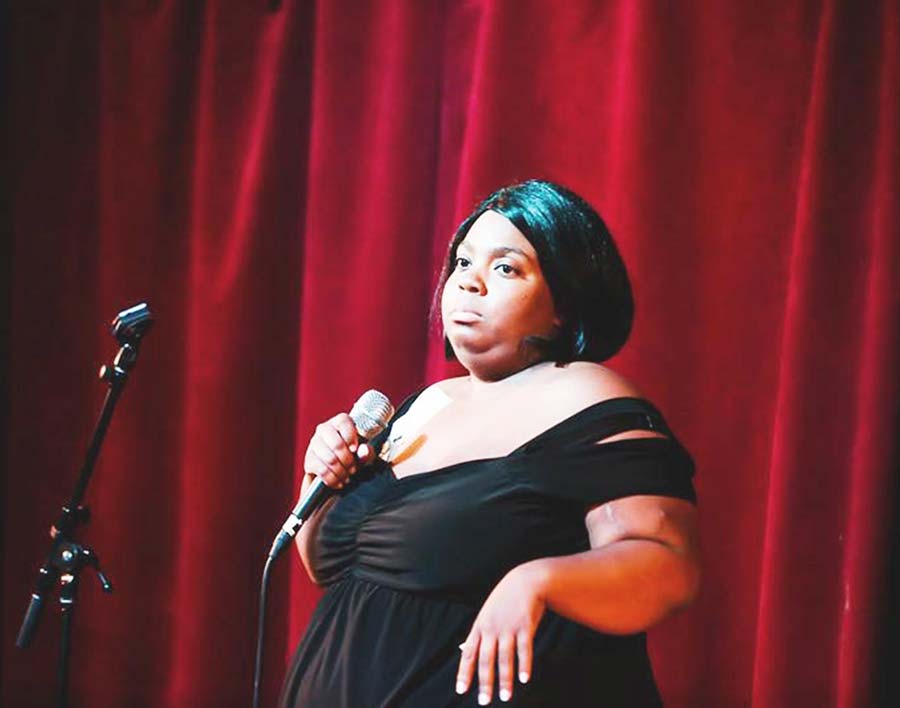 Bawdy Dallas Comic Jaljuda’s Health Issues Have Left Her In Need Of A Kidney Transplant. But They Haven’t Stopped The Stand-Up Comedian From Performing.

You could sift through a lifespan of calendars and never find the “right” moment to receive difficult medical news, but when I recently spoke with Jaljuda the Comedian about her own recent health difficulties, she couldn’t help but note the unfairness of receiving her kidney failure diagnosis during a particularly fruitful point in her stand-up career.

“Y’know, sometimes you have a dry period,” she says. “Then, sometimes, you have a hot streak where you’re always getting booked, you’re constantly hitting mics and your own showcases. I was on one of those; I was constantly going out of state, constantly doing shows.”

That kind of hot streak wasn’t altogether a new experience for the comedian. Jaljuda had only been performing stand-up comedy for six months when she earned the opportunity to open for Mo’Nique. And while accolade arrived early on in her career, it would soon be joined by others. Jaljuda’s biting, ribald commentary and moments of disarming self-deprecation would eventually earn her more work with notable headliners, and help her expand her performing radius beyond Texas and into Louisiana, Arkansas, Kansas and Oklahoma, as well as opportunities to perform on showcases in Los Angeles.

In fact, it was while she was in Los Angeles — for the Comics Rock convention in 2016 — when she started experiencing worrying signs of illness. She assumed her problems were the results of fatigue and long periods spent in a car, as she had just performed multiple shows on the road en route to L.A. When the problems persisted after she returned home, though, Jaljuda made an appointment with her doctor and underwent a series of tests to determine why she continued to feel sick.

The tests revealed that her kidneys were functioning at twenty percent.

To truly reverse her kidney troubles, Jaljuda needs a transplant organ. The dialysis treatments she’s been undergoing provide functions a person would normally rely on their kidneys for, but that’s not a permanent solution. According to the National Kidney Foundation, the average life span for a person using dialysis is just five to ten years, although some patients have continued to use dialysis for longer.

The dialysis isn’t all she’s had to go through to deal with her condition. She’s undergone multiple surgeries, and she’s been through periods of extended hospital stays. She adheres to strict dietary restrictions to prevent an upset of the chemical balance in her bloodstream. Just one example: She has to avoid bananas because their potassium levels could cause a heart attack.

Since her diagnosis, Jaljuda has had to learn how juggle her home life, her comedy and her well-being. She’s also had to make meaningful changes to her health just to earn a place on a transplant list. To gain a spot on the list of a transplant center in Tyler, she had to lose 100 pounds. She’s now going through a series of medical tests and scans in order to receive a final approval.

If she finds a living donor, Jaljuda can avoid a potentially lengthy wait on the transplant list for a cadaver organ, and thus begin to truly recover from her illness. She has information on her professional Facebook page to let people know about her search, donor requirements, compatible blood types and contact information for people who are willing to donate.

While she works to secure her spot on the transplant list, she’s trying to help others dealing with kidney failure. Jaljuda is taking part in the Dallas-Fort Worth Kidney Walk in Grand Prairie this May, and she’ll join the charity’s Austin drive this November.

But, disruptive and difficult as her condition may be, it hasn’t taken her away from the stage. Jaljuda currently has shows planned for Fort Worth and Longview, and she’s looking to visit more East Texas towns in the near future. She’s also slated to perform at the Black Girl Giggles festival in New Orleans during Essence Fest. Last year, meanwhile, she traveled to Louisiana to open for Arsenio Hall.

Still, her condition has cut into her ability to accept every opportunity. While we talked, she mentioned a recent show she had to back out of because she’d just gone through surgery and was placed under driving restrictions. Medical procedures can interfere with her planned shows, and she’s no longer able to pick up those gigs that pop up on short notice because of dialysis commitments. She’s made adjustments to work around that issue.

“I try to book [shows] at least a month in advance so I know what I need to do as far as treatment,” she says. “Do I need to modify my schedule? Do I need to contact a clinic out there? Can I miss a day and be alright?”

Any serious health issue can be understandably difficult to manage. But Jaljuda says she’s doing all she can to find the comedy within the reality of her illness. It’s important to do so, she says, as finding levity in the search for an organ donor — and for the past three years of surgeries, medical visits and dialysis — can do more just keep her spirits up.

Frankly, funny moments found in an otherwise dire situation can inspire good jokes. And she can still use the material. After all, she’s not done performing.

“Parts of it are funny — you can find humor in just about anything,” she says. “But parts of it are not funny, if that makes sense. There’s some humor in it. You just have to look for it.”