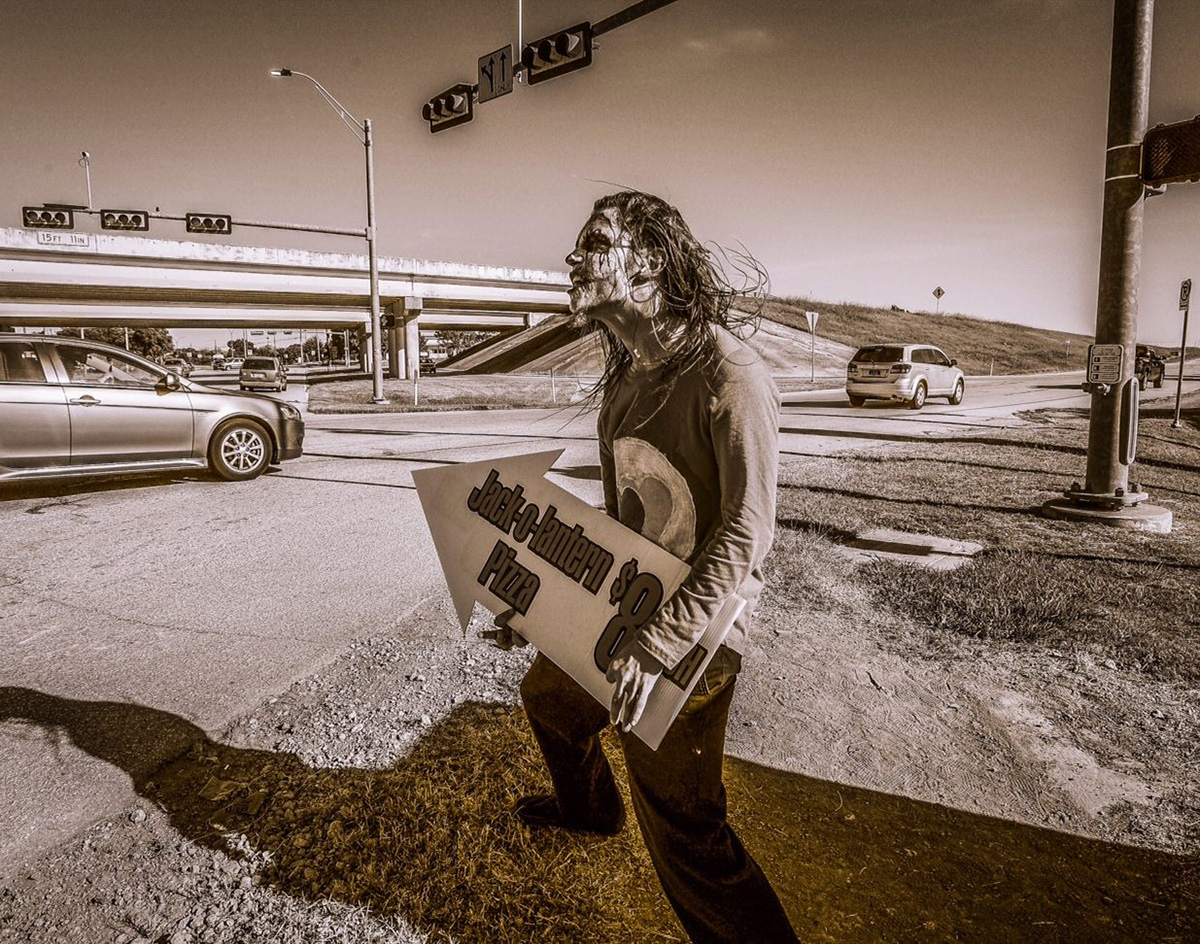 Meet The South Arlington Sign Slayer, The Most Metal Sign Guy In North Texas — And Maybe Even America.

All photos by Justin Press, unless otherwise noted.

Earlier this year, an Arlington police officer approached Michael Hildreth on the side of the road. To that point, it had been a day like any other — Hildreth was just plugging away at his job — and he was surprised when the officer sidled up alongside him.

Immediately, the officer explained why she was there. Seems the police had received a call from a concerned citizen who’d seen someone acting all “methed out” in public. Turns out, that someone being reported was Hildreth.

But it wasn’t meth that Hildreth was high on. It was metal.

He calmly explained that to the officer, who in turn requested that he tone things down — and, specifically, that he quit it with the headbanging that he’d been seen doing to that metal music he loves so much. Hildreth said he would.

But after watching the officer suspiciously circle past his post two more times, Hildreth decided not to keep his promise.

“Forget that,” he thought. “I’m not toning anything down.” 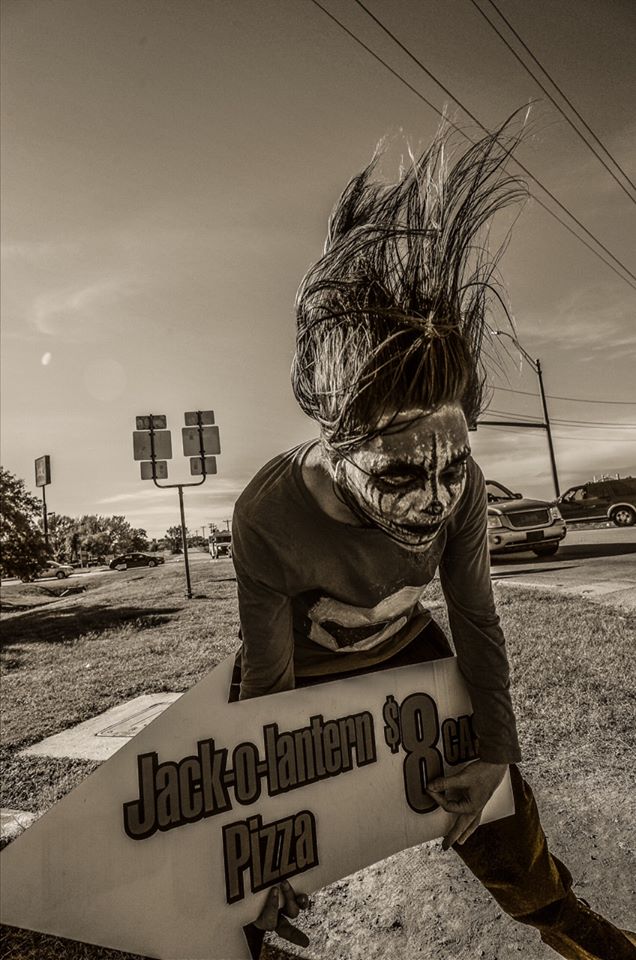 Good thing he didn’t. Hildreth, who works as a human billboard for the Papa Murphy’s location off of US-287 in Arlington, has unknowingly achieved a small semblance of internet fame over the course of this past year by headbanging for hours on end and mimicking guitar-playing with the pizza advertisement he holds.

His promotional antics have turned him into something of an urban legend in this part of the region. To the more than 2,100 people who “like” the Facebook page that was created in his honor, Hildreth is affectionately known as the South Arlington Sign Slayer. On that page, fans upload adoring photos and videos of Hildreth doing his thing. One supporter event went so far as to get a tattoo honoring Hildreth’s efforts. 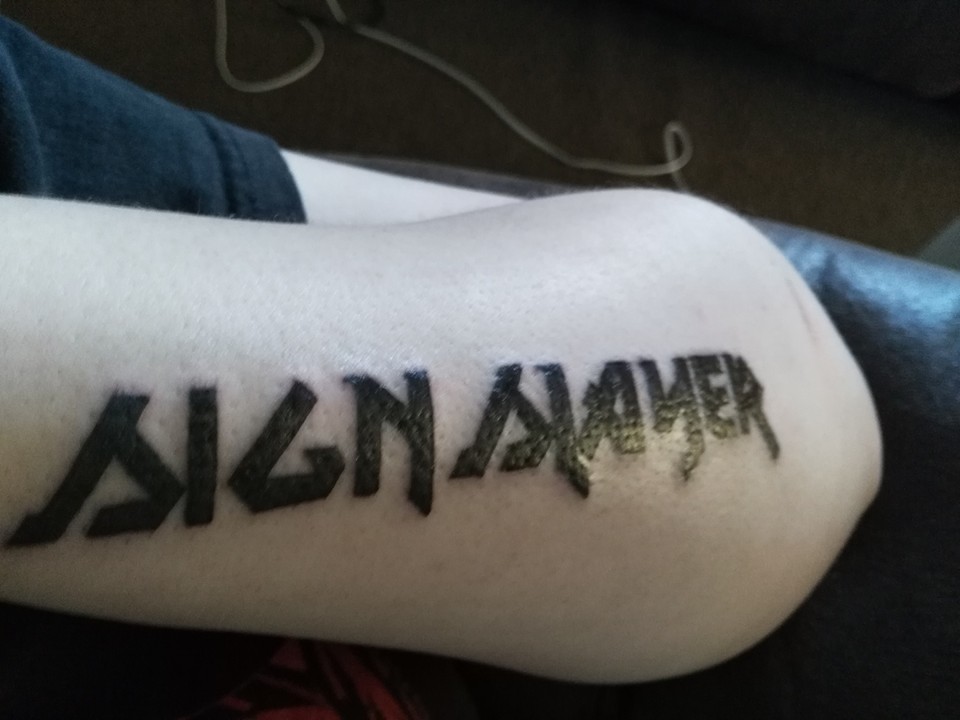 It’s been a real trip for Hildreth to watch his fanbase grow — especially considering that being a human billboard wasn’t the job he was initially hired for at Papa Murphy’s. At first, the 20-year-old worked inside the restaurant. But after showing up to work late six times in one month, he was sent out with a sign to spin as punishment. What his employers didn’t anticipate was that Hildreth and his public headbanging would end up being good for business.

In February of last year, his bosses made it his main gig at the restaurant. 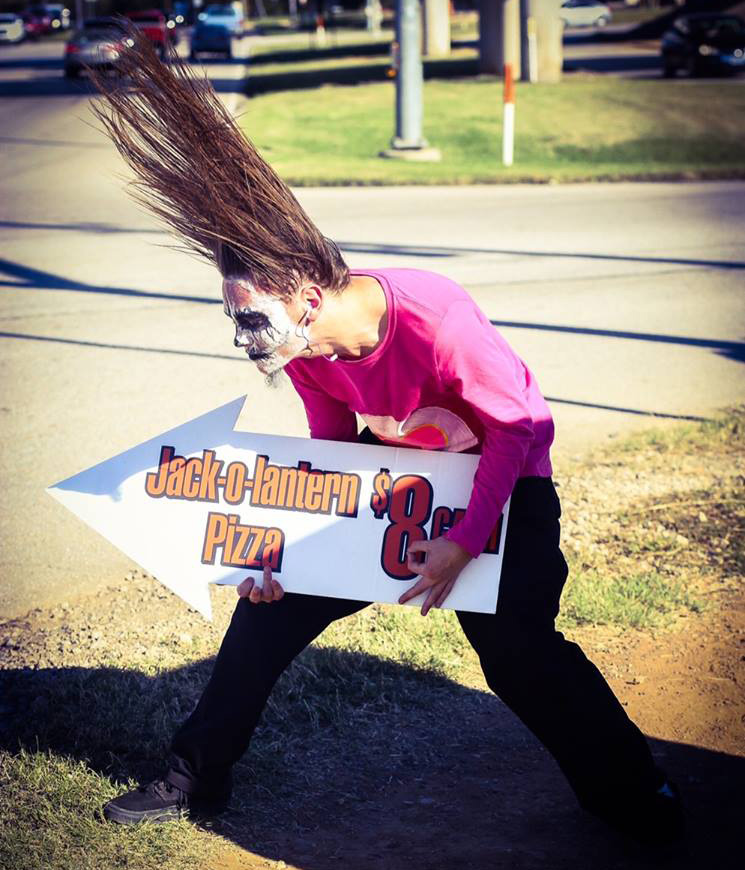 Little did they know that this wasn’t Hildreth’s first rodeo as a sign spinner. Two years earlier, he’d started honing his skills by working for a tax filing service, hoping to pick up some extra cash. That was before he was into metal, though; back then, he was mostly into electronic dance music, so he would dance instead of headbang. But by the time he started carrying signs for Papa Murphy’s he was over that scene.

“I was really bored with it,” Hildreth says. “So I looked in my phone and saw that I had Slipknot, Pantera and Suicidal Tendencies. So I just started headbanging.”

The Facebook page almost immediately followed that decision. The first time Hildreth saw it was when a co-worker showed it to him. At the time, it had just 55 likes.

“And I thought it was the greatest thing ever,” Hildreth says now with a laugh.

It’s gotten even better than that, though. As the like count raised on that Facebook page — and Hildreth started to earn fans just for being himself — his self-esteem has similar seen a boost. So too did his bank account: Thanks to the Facebook page, Hildreth’s become about as in-demand as a sign holder can get in South Arlington; beyond his Papa Murphy’s commitments, his fame has earned him part-time gigs for such businesses as Chicken Express, Super Cuts and even a vape shop. 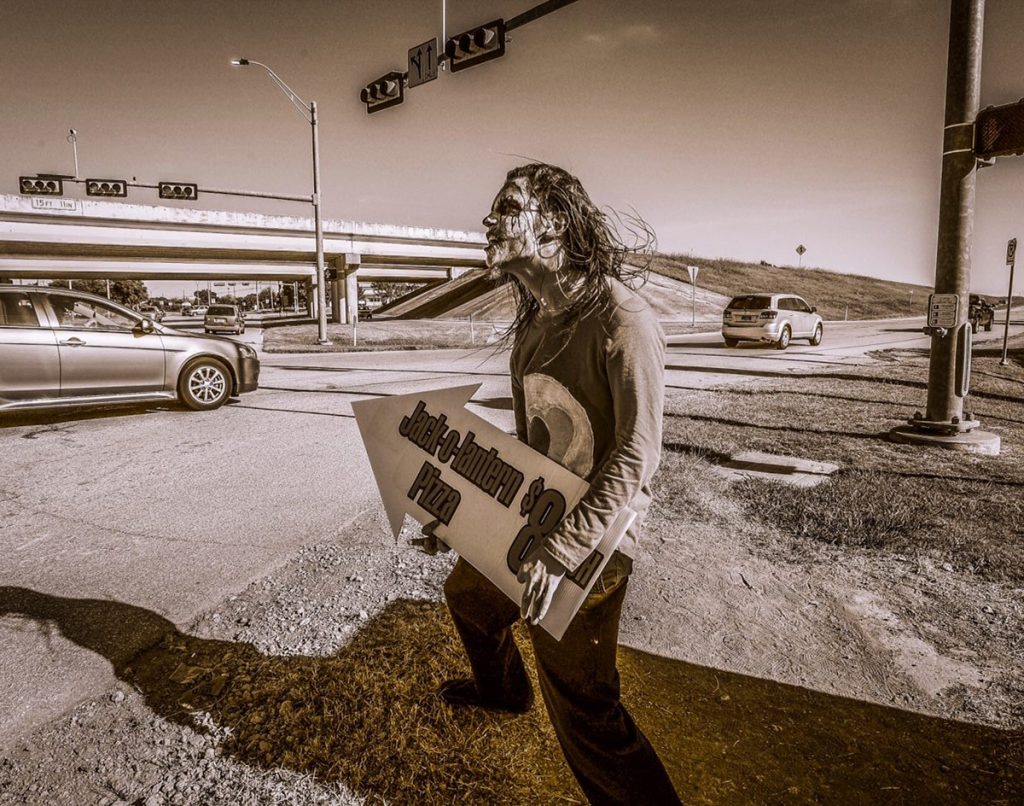 Still, it’s not like Hildreth’s work as the South Arlington Sign Slayer is making him rich. That’s why, though he appreciates the attention, he maintains that his sign work is just a gig — and nowhere near where he actually wants to be in life.

“In five years, I see myself on stage,” Hildreth says. “Or I see myself in my fifth year of studying the criminal mind.”

The stage dream seems is somewhat on hold at the moment. Most recently, Hildreth has been playing drums for the upstart Arlington metal band Turtle Castle, but that band is currently on hiatus after its lead guitarist moved to Illinois. 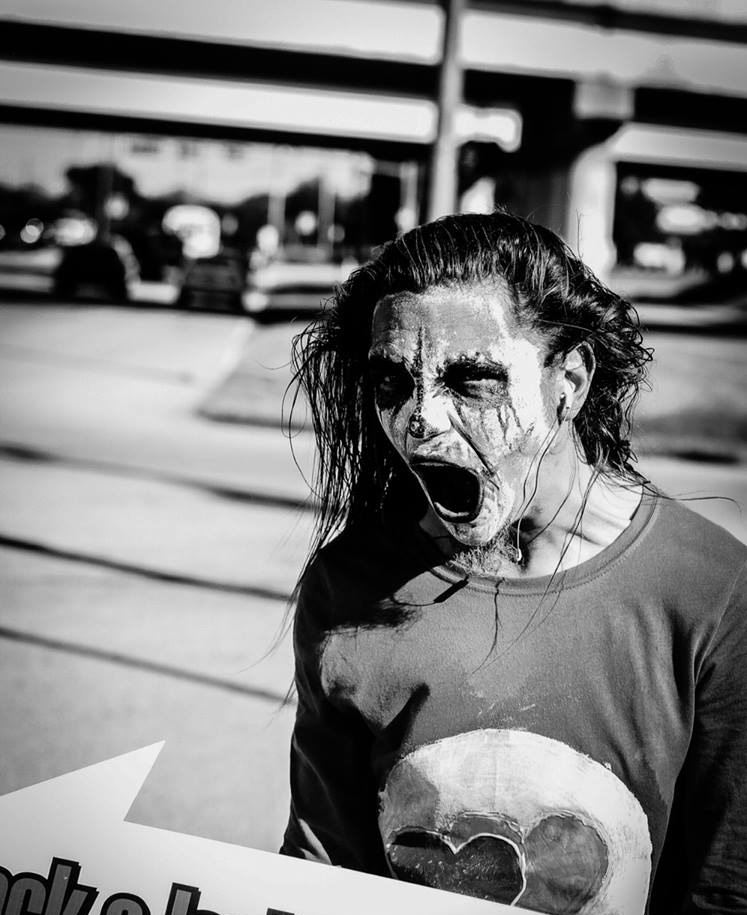 Because of that break in action, Hildreth is considering going to school to get a degree in criminology.

“As a kid, I watched a lot of horror movies based on serial killers,” he says. “I started looking into guys like John Wayne Gacy, and then I wanted to make a career out of it.”

In a few years, maybe that will be the case. For now, Hildreth says he’ll keep doing his thing for Papa Murphy’s, making money where he can while enjoying the attention he gets for it all — especially when it comes from a gawking passerby who can’t help but approach him for a brief chat.

Those, Hildreth says, are the favorite interactions that come with his job. He relishes the chance to do his part in breaking down stereotypes that people may have about metalheads like him.

“Metalheads are some of the most compassionate people around,” Hildreth says. “I would like to change the mainstream’s opinion on metal.” 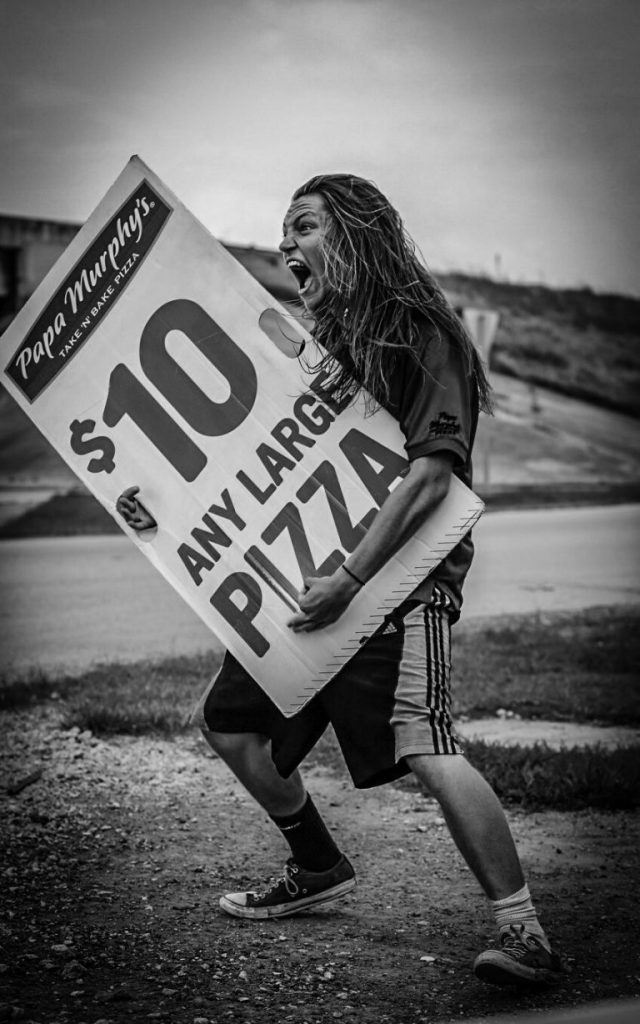